Gold moved lower in Asia and London, making a new low to 1269 before bouncing back during the US session. The spinning top candle was a bearish continuation, and forecaster jumped higher, but remains in a downtrend. No reversal yet for gold. Gold remains in a downtrend in both daily and weekly timeframes, while gold/Euros is in an uptrend in the weekly and monthly timeframes.

Futures are showing a 3% chance of a rate cut in June, a 43% chance of one rate-cut by December and a 23% chance of 2 rate cuts. Rate cut chances fell a bit today. 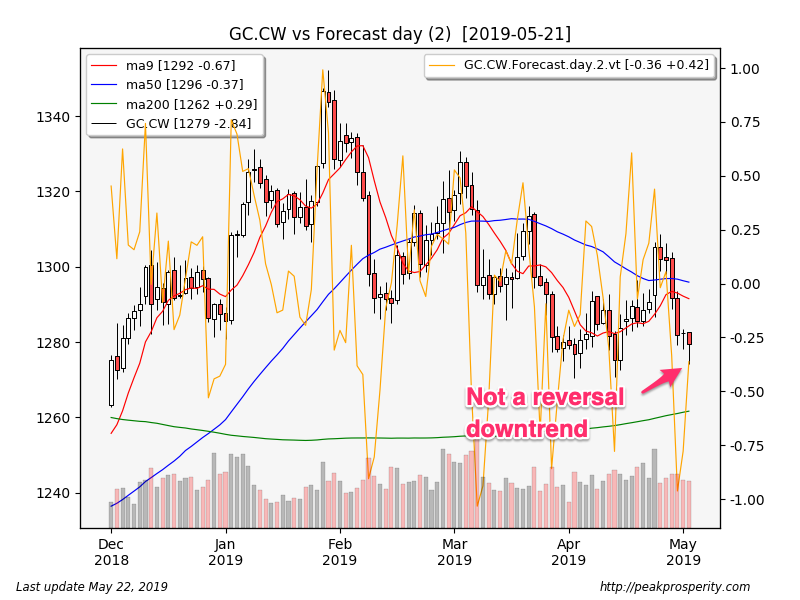 Silver looked a lot like gold; the doji candle was a bearish continuation, and forecaster moved higher but remains in a mild downtrend. Silver remains in a downtrend in all 3 timeframes. No reversal for silver today, although the velocity of the downtrend is clearly slowing. 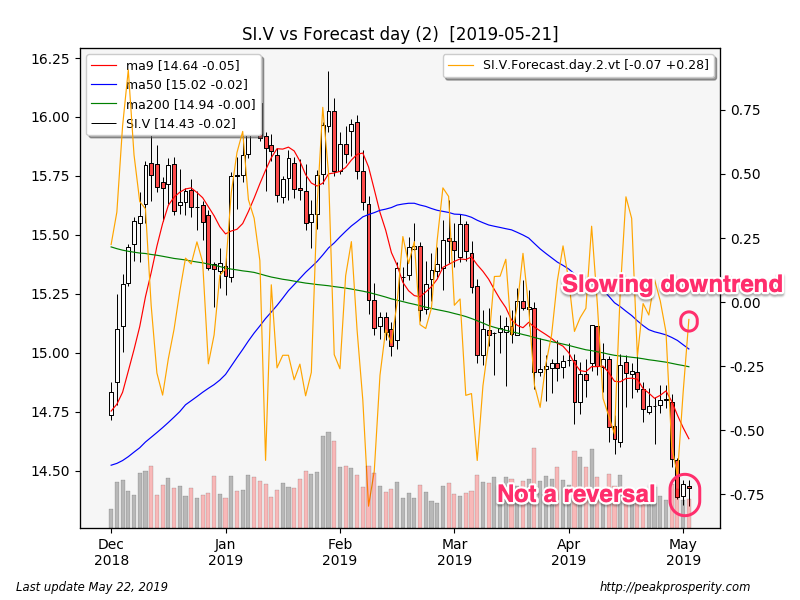 The miners gapped down and dropped during the initial 30 minutes, but then rallied back strongly to close the day in positive territory. GDX rose +0.15% on very light volume, while GDXJ climbed +0.35% on very light volume also. XAU moved up +0.25%, the short white/spinning top was a bearish continuation, and forecaster was little changed, remaining in a downtrend. XAU remains in a downtrend in both daily and weekly timeframes.  No reversal today for the miners. 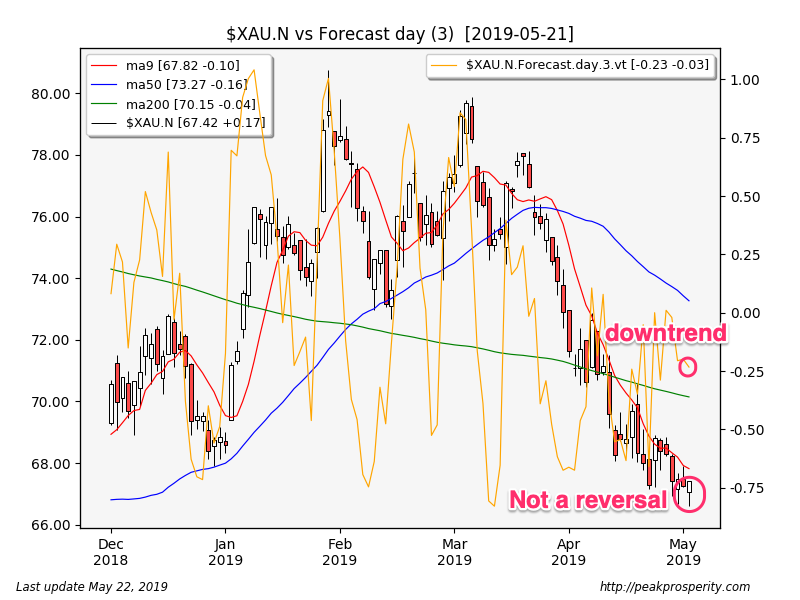 Platinum rose +0.23%, palladium dropped -0.84%, and copper fell -0.55%. Copper made a new low – it continues to look quite weak, palladium is continuing to drift lower, while platinum’s candle looks good to the eye, but the candle code doesn’t see today’s move as a reversal. It will need confirmation tomorrow.

The buck rose +0.13 [+0.13%] to 97.49. The spinning top candle was a bullish continuation, and forecaster moved lower but remains in an uptrend. Today’s rally unwound the monthly sell signal; the buck ended the day in an uptrend in all 3 timeframes.

Crude fell -0.30 [-0.47%] to 63.02. The short black/NR7 was unrated, and forecaster dropped which puts crude (just barely) in a downtrend. While the API report was somewhat bearish (crude: +2.4m, gasoline: +0.35m, distillates: -0.24m), the report knocked price down by maybe 10 cents. Crude is in a very slight downtrend in the daily and weekly timeframes – it really could roll over at any moment. However, with VZ and Iran in the Regime Change crosshairs of the Permanent War Establishment in Washington, its hard to know how things will play out. It is what they call a “news driven market.”

SPX rallied +24.13 [+0.85%] to 2864.36. Most of the rally took place in the futures markets overnight. The confirmed bullish NR7 was definitely bullish (48% bullish), and forecaster jumped higher, moving back up into a reasonably strong uptrend. SPX remains in an uptrend in the daily and monthly timeframes.

TLT fell -0.20%, the swing high pattern is bearish (46%), and forecaster fell but remains (barely) in an uptrend. TY fell too, losing -0.12%, the long black candle is a bearish continuation, and forecaster moved down and remains in a downtrend. Today’s move pulled TY below the 9 MA, which is a bearish sign. Even so, TY remains in a relatively strong uptrend in both weekly and monthly timeframes. The 10-year yield rose +1 bp to 2.43%.

JNK rose +0.25%, a strong move, and a new high for this brief cycle. Candle print was a bullish continuation, and forecaster moved higher into an uptrend. BAA.AAA differential is unchanged, although the downtrend is definitely weakening. This means the credit situation has stopped improving, at least according to the forecaster anyway.

The Existing Home Sales report (released at 10 am) shows that sales fell -0.4% m/m and -4.4% y/y, dropping below the low end of estimates.  The housing market remains in a recession, in spite of mortgage rates dropping 30 bp below where they were this same time last year.  (Current 30 year rate as of last Friday: 4.07%).