Gold chopped sideways, making a brief new low to 1273.30, but ended up back where it started by end of day. The doji candle was a bearish continuation, and forecaster moved higher, but remains in a strong downtrend. Gold is in a downtrend in both daily and weekly timeframes, while gold/Euros is in an uptrend in the weekly and monthly timeframes.

COMEX GC open interest fell -8,012 contracts. That’s quite a bit of short-covering on the new low. Perhaps this is the commercials covering after gold’s recent drop. 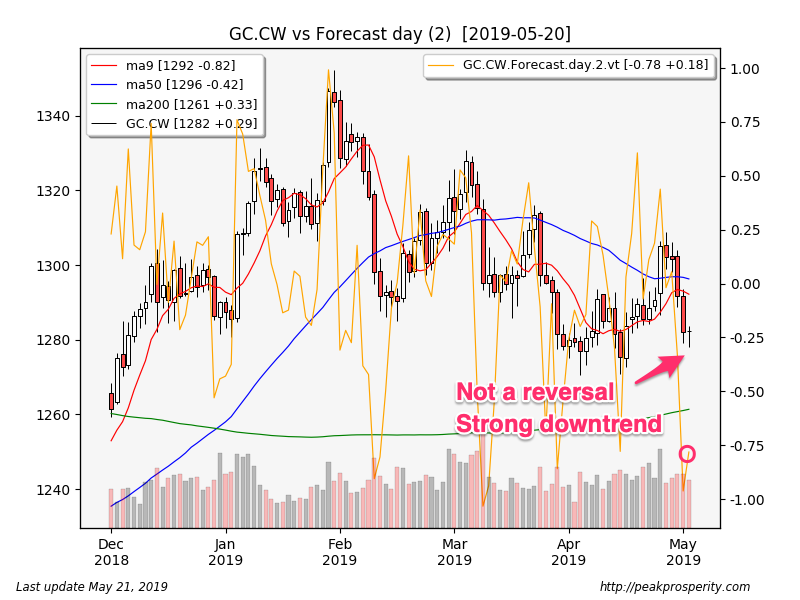 Silver also chopped sideways, making a new low to 14.36, then recovering into the close. The short white/bullish harami pattern was a bearish continuation, and forecaster jumped higher, but remains in a downtrend. Silver is in a downtrend in all 3 timeframes.  The new low says that a reasonably strong close tomorrow would result in a swing low – that would be much more likely to be a reversal.  As of right now – we don’t have one.  Harami candle patterns are usually quite weak, and today’s was no exception. 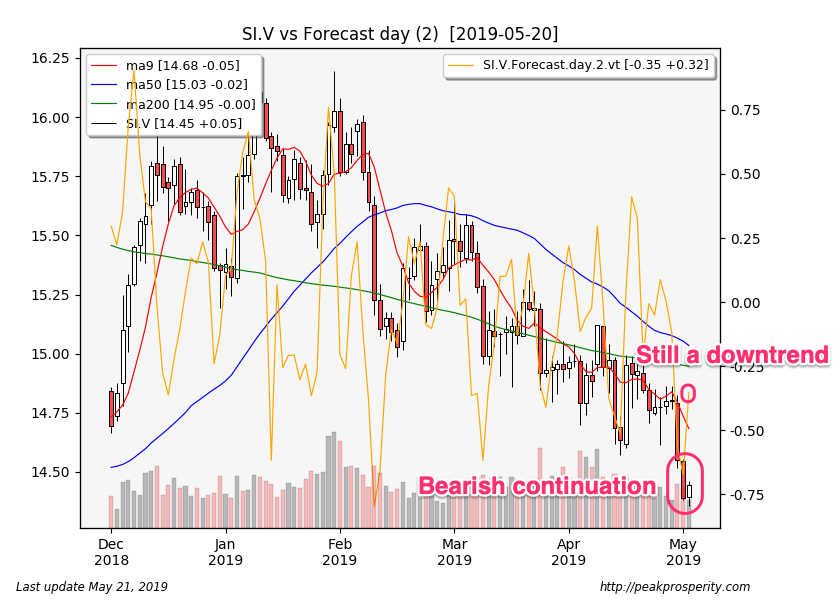 The miners tried to rally but failed; GDX dropped -0.34% on light volume, while GDXJ fell -0.97% on light volume also. XAU moved down -0.36%, the short black/spinning to candle was a bearish continuation, and forecaster inched higher but remains in a downtrend. XAU is in a downtrend in both daily and weekly timeframes. 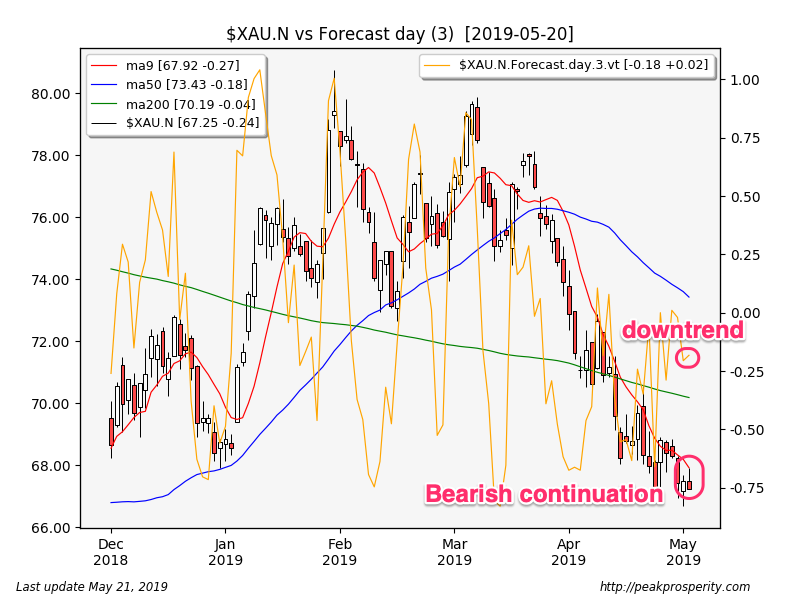 Platinum dropped -0.51%, palladium ralied +1.52%, while copper fell -0.20%. Platinum’s horrid downtrend remains in place, although it might be slowing down ever so slightly. Armstrong’s name for what is happening on platinum’s daily chart “a waterfall move” which is pretty much as bad as it gets.  Falling platinum prices probably ends up pulling gold prices lower, since the two are generally quite closely correlated. 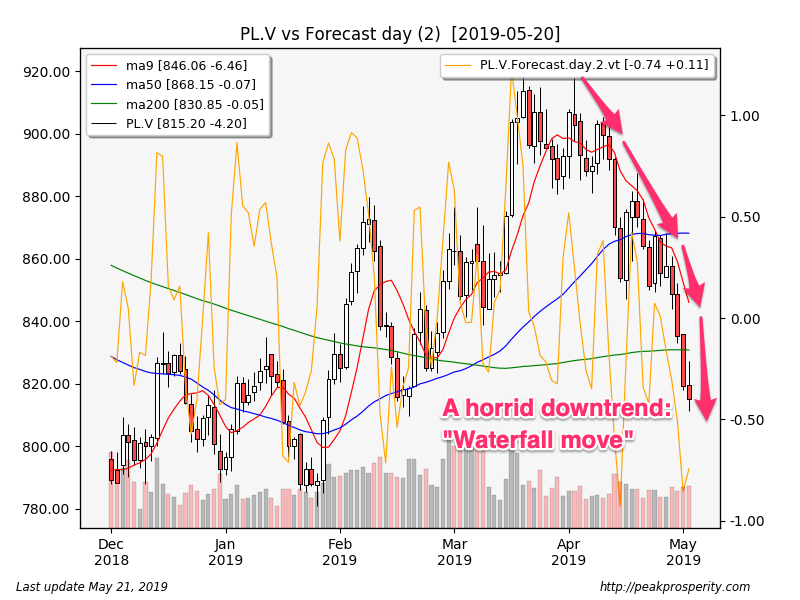 The buck fell -0.08 [-0.08%] to 97.36. The short black/NR7 candle was unrated, and forecaster inched lower but remains in a strong uptrend. Today’s modest drop pulled the monthly ever so slightly into a downtrend. That leaves the buck in an uptrend in the daily and weekly timeframes.

Crude rallied +0.39 [+0.62%] to 63.32. Crude gapped up at the open, fell after Asia closed, but then bounced back during US trading. The high wave candle was somewhat bearish (34% reversal) and forecaster moved lower, but remains in an uptrend. This leaves crude in an uptrend in both daily and monthly timeframes – with the weekly right on the edge.

OPEC is struggling with whether or not to increase production in the second half of 2019. Russia wants to increase production by 300 kbpd, while Saudi Arabia wants to keep production flat, more or less. However, the plans of OPEC may well be superceded by one of two critical events: a “supply outage”, and/or an economic downturn. It looks to be a coin flip as to what really happens; brent crude futures are signaling tight supply in the near term, while crude in storage in the US continue to rise. My reading of the tea leaves suggest they’l leave well enough alone.

SPX fell -19.30 [-0.67%] to 2840.23. SPX dropped in the futures markets overnight – tried to rally, but failed. The high wave candle was neutral, while forecaster dropped but remains in an uptrend. SPX remains in an uptrend in the daily and monthly timeframes. The weekly is still bearish.

TLT fell -0.21%, the long black candle is a bullish continuation, and forecaster inched lower but remains in an uptrend. TY didn’t look so good, falling -0.18%; the long black candle was neutral, but forecaster dropped hard, which puts TY in a downtrend on the daily. TY remains in an uptrend in the weekly and monthly timeframes. The 10-year yield rose +2.3 bp to 2.42%.

JNK fell -0.07% – JNK has been chopping sideways for the past 3 days, and it remains in a mild uptrend. BAA.AAA differential is unchanged, and remains in a downtrend. Credit spreads remain calm.

SPX is moving lower, but it isn’t breaking any speed records to do so. And so far, the drop isn’t providing much of a safe haven flow into either gold, or bonds.   That said – the higher risk NDX (-1.69%) is falling more quickly than SPX (-0.67%), which itself is falling faster than the more international DJI (-0.33%).  That’s a form of risk off also.

Dave, in my recession watch mode I gather data.  This just popped up this morning. 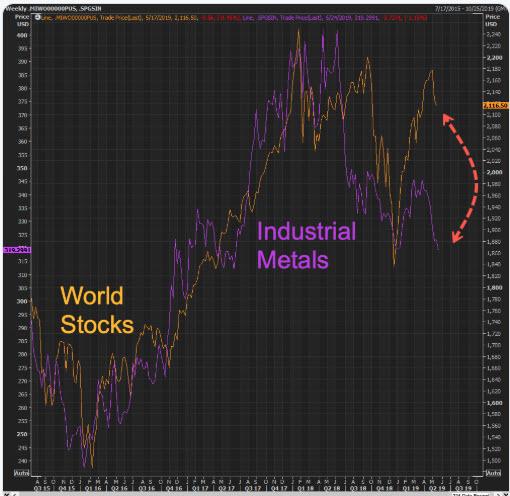 The former because trade wars will impact consumption, the latter because everyone “knows” the central bank put is always at the ready.

Alternatively, stocks are looking the in the wrong direction while metals are sneaking out the backdoor because a recession is imminent.

Of course, we also had “the recession that wasn’t” in 2016 so maybe equities are assuming that another gigantic adrenaline injection will get the junky moving again?

My feeling is that a lot of those sorts of charts can be a bit goal-seeked.  Someone is looking to prove that a crash is on the way, and they look for a pair of timeseries that diverges which is then presented as “proof” of said upcoming crash.  I’ve seen maybe a dozen such charts over the past few years – not this exact one, but variations on a theme.

When I do this sort of thing, instead of just showing “today’s divergence”, I show the series-pair relationship over the course of several decades, with “USREC” displayed over the top, so we can see if the relationship is a long-standing one, and if it leads, or lags.  More boring, but – I think – more scientific.  It should have predicted – or been coincident with – at least 50% of the last 3-4 recessions to be “interesting”.  To me anyway.