Courtesy of the buck, gold made a new high to 1239.10, and kept most of those gains into the close. Candle print was an opening white marubozu, which the code felt was bullish. Gold has finally managed to close above its 9 EMA. All that said, the entire glacially-paced gold rally over the past 4 days is entirely due to currency moves. The falling dollar is the cause for gold’s upward movement, and that suggests we might want to be cautious in calling the low for gold at this point.  The bid under gold just isn’t that strong.

Open interest at COMEX for GC fell by -819 contracts.

Rate rise chances (June 2017) fell -10 to 69%. That’s a huge move in just one day.  Something happened, but I didn’t see any economic report that would have caused this sort of effect. 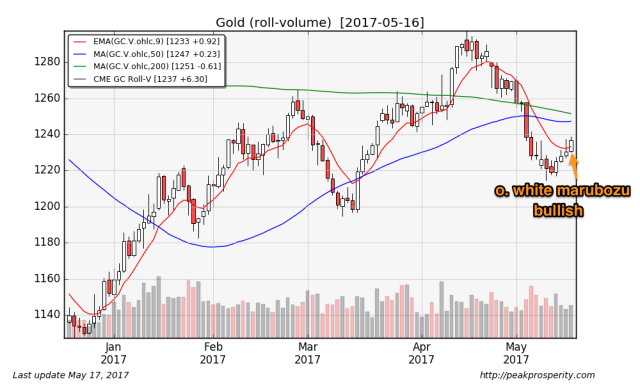 Silver rallied strongly again today, making a new high to 16.86, managing to close within two cents of that level. Silver is on a roll; candle print is a white marubozo, which the code finds to be somewhat bullish. White marubozu candles seldom mark highs. Silver is right at resistance right now, defined by the previous low around 16.85 set back in early March. A break through this level could see silver’s move accelerate, as the new managed money shorts are squeezed out of their positions by the rally.  Those commercials really get you coming, and going. 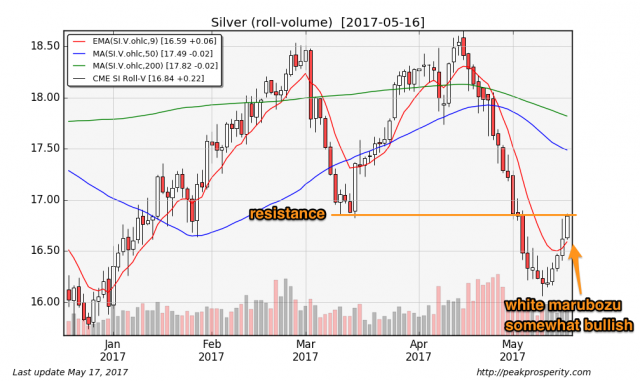 Miners gapped up a bit at the open, and then traded in a relatively narrow range all day long. GDX closed up +0.70 on light volume, while GDXJ rose +0.67% on very light volume. GDX printed a short white/NR7 candle, which the code found to be equal parts bullish and bearish. GDXJ had the same print, which the code found to be somewhat bullish.  SIL, the silver miner ETF, did best, moving up +2.28% on extremely heavy volume.  The GDX:$GOLD ratio inched higher, the GDXJ:GDX ratio moved lower, and the SIL:$SILVER ratio shot higher, and is now clearly through its 200 MA.  Conclusion: silver’s hot, gold is not. 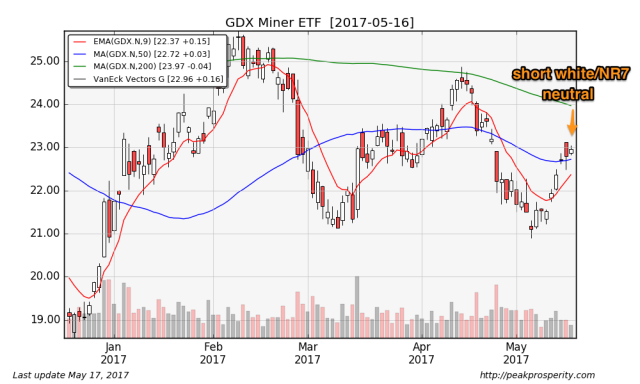 Platinum rallied +1.29%, palladium fell -0.10%, and copper climbed +0.45%. There was no clear signal from the other metals, other than a slight weight towards bullishness from the candle code.

The buck’s fall has accelerated, with USD falling -0.81 to 97.88, making a new low on the day. Candle print is an evil-looking black marubozu, which the code feels is definitely bearish. Black marubozu candles seldom mark lows. For its part, the Euro screamed higher, jumping to a new high of 110.83.

So what’s the story with the buck? I didn’t see any economic news that caused the move; it started late in Asia, and just continued through to the close in the US. My assessment: its about Trump, and political risk in the US.  The current downtrend in the buck happened last Friday, after Trump fired Comey.  Today’s move (I believe) was a follow-on from that, coupled with the latest installment of Trump is Putin’s stooge.

Problem is, the Democrats would happily impeach Trump for a single unpaid parking ticket, and most of the Republicans would probably go along since he’s not one of them, leaving us with “old reliable” establishment Mike Pence. Everyone in Washington goes away happy with that result – they’d be back to business as usual.  The Republican politicians just need a reason that passes the sniff test with Trump’s base, whom they offend at their peril. I believe that the currency market is now telling us that the “impeachment” outcome is starting to become a real possibility. Ultimately, successfully executing an impeachment proceeding is a political process, not a criminal one, and none of those politicians are on Trump’s side. Here’s what that looks like on a chart: 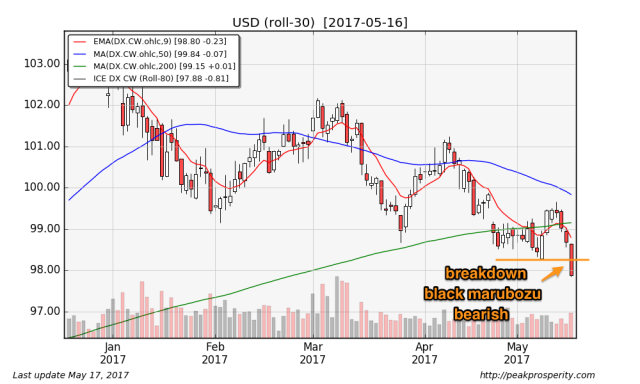 Crude tried rallying today, but the rally failed; crude ended down -0.56 to 48.46. Crude was just about flat, until the API report was released after market close; it showed a crude inventory build of 882k, while gasoline inventories fell by -1.88 million barrels. The market didn’t like this, and sold off another 50 cents. Candle print was a closing black marubozu, which the code felt was only slightly bearish. EIA report comes out tomorrow.

Given the gold-in-euros chart, I don’t really trust the gold rally.  Gold COT report isn’t bullish just yet, and so I’m not projecting some massive new rally for gold right now.  As long as the buck keeps tanking, gold will move higher, but absent some safe haven move, gold probably lags.

Silver on the other hand looks quite strong.  The balance of forces in paper silver (commercial shorts, managed money longs, etc) show a setup that is quite bullish.  COT can’t be used for timing, but once the reversal is confirmed by the technicals, we are off to the races in silver.  Commercials will start buying & covering like crazy, and that will cause the managed money to be squeezed out of their positions, and that just drives prices even higher.

It’s clearly manipulation by the commercials, in both directions, but during the down cycle when they are giving you cheap silver prices, my concept is don’t object, don’t complain, just follow them in and trade the dip.

The falling dollar is probably helping too.

TLT was our hint yesterday that all was not quite well.  Sometimes equities are the last thing to figure stuff out.

If we lose 2380 support, things could get ugly.  The Trump reflation trade more or less depends on Trump not being impeached…

Looks like Trump has turned from a reflationary influence into a Safe Haven influence.  Gold has caught a real bid now, and appears to be about to overtake silver on a %-gain basis.  SPX is right at support.  This could start to become interesting.

Could we actually see selling in the equity market?  Certainly the VIX is at practically max complacency.

And the 30 year bond has just broken out.

All signals have moved to risk off.

I don't think your rank optimism will pay off today.  🙂

Financials are leading, which if you're bearish, you want to see.  Bonds and gold have both maintained their gains.  VIX continues to climb.  SPX now off -30.  We're past the first 90 minutes.

I'm going to take a minor victory lap – hopefully not too prematurely – because my short XLF trade is finally paying off.  I sold the rally a couple of weeks back and actually got a good entry point for a change.

I don't think your rank optimism will pay off today.  🙂

Financials are leading, which if you're bearish, you want to see.  Bonds and gold have both maintained their gains.  VIX continues to climb.  SPX now off -30.  We're past the first 90 minutes.

I'm going to take a minor victory lap – hopefully not too prematurely – because my short XLF trade is finally paying off.  I sold the rally a couple of weeks back and actually got a good entry point for a change.

I'm pulling for you to be right!  I bought short term calls on the VXX ETF the other day when the VIX went below 10.  I thought, "this can't last".  I've watched VXX trend slowly down.  But today is helping a lot.

Boy, that VXX thing is a one-way ticket to the poor house.  Check out a weekly chart!

How much money do you think the big guys have made taking the short side of VXX?

It won't pop like your VXX calls, but neither does it decay quite so horribly when the market moves sideways!

The establishment really wants Trump gone.  I wonder what his base will do if/when it happens.  "We elected him, and you politicians took him out."

I wonder what Trump himself will do if/when it happens.  My goodness.  He'll construct his own narrative, that's for sure.

Its a recipe for civil war.

I wonder if they realize what they're getting ready to unleash.

Yeah Dave, I've been burned BIGLY with levaraged ETF/VIX products, back in my foolish days.  I do a lot more watching than trading now.  It felt like a good risk/reward to me the other day, so I pulled the trigger.  I let TVIX get away from me one time.  Ouch!

TLT is looking good today.  Everything is saying risk off.  Just looking at the daily charts of gold and the US equity markets a few minutes ago, it looks like roughly that gold has made a double top and the indexes have made a double bottom.  Will be interesting to see if those hold and we reverse into the close or if we punch through.

Armstrong almost had a bearish write-up on his site today.  Did you see the article.  It's the Market Crash one.  Definitely worth a quick read.

The establishment really wants Trump gone.  I wonder what his base will do if/when it happens.  "We elected him, and you politicians took him out."

Its a recipe for civil war.

I wonder if they realize what they're getting ready to unleash.

My greatest concern is a civil war.  Friends have stopped talking with each other.  Politics is no longer discussed at work.  The MSM press continues to throw gasoline on the fire.  They have no idea what they're going to unleash.

Yesterday a coworker called me into his office and told me he purchased an AR 15 during his lunch break.  How is this supposed to end well?

Nate, here is an interview with Danny Sheehan one of our greatest public interest lawyers, who lays it out from a perspective informed by great experience to back it up.

Donald Trump’s Coup d’etat:  Erosion of the Constitution and civil rights, criminal conspiracy,  and the White House’s conflict with the Deep State