Gold popped to a new high early in Asia, and then spent the rest of the day slowly selling off. The spinning top candle was a bullish continuation, but forecaster fell sharply, dropping back into a downtrend. Gold is now in an uptrend in just the weekly and monthly timeframes, while gold/Euros remains in an uptrend in all 3 timeframes.

COMEX GC open interest fell -870 contracts. I guess they didn’t feel the need to pile on any more shorts since gold didn’t rally. 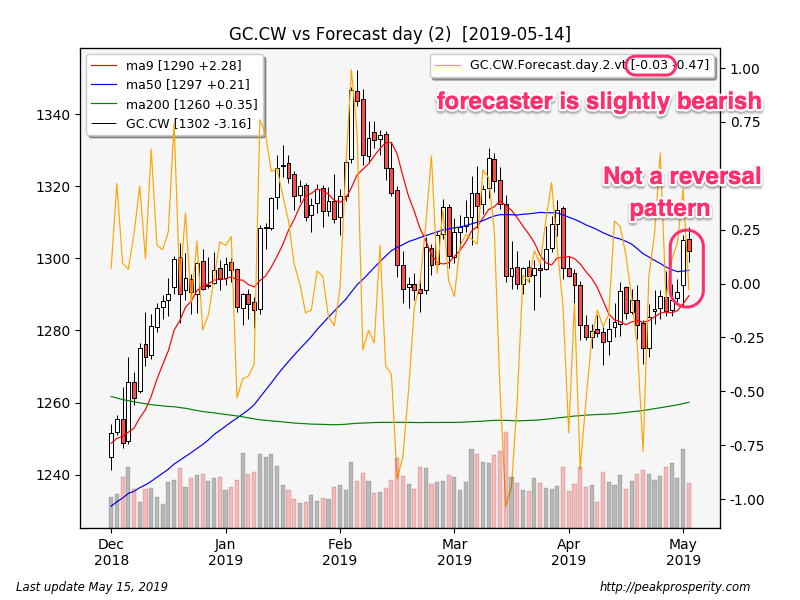 Silver chopped sideways in a narrow range. The short white candle was neutral, and forecaster dipped slightly, but remains (just barely) in an uptrend. Silver is in a – very slight – uptrend in both daily and monthly timeframes. 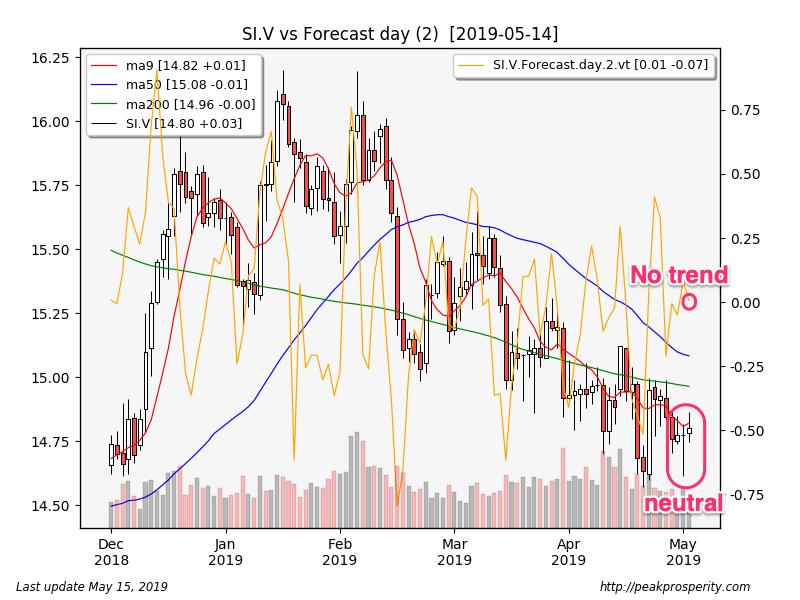 The miners sold off for the first half of the day, then rallied back in the second half. GDX fell -0.43% on moderately light volume, while GDXJ dropped -0.72% on heavy volume. The spinning top candle was unrated, while forecaster dipped down into a moderate downtrend. XAU has yet to reverse. XAU is in a downtrend in both the daily and weekly timeframes. 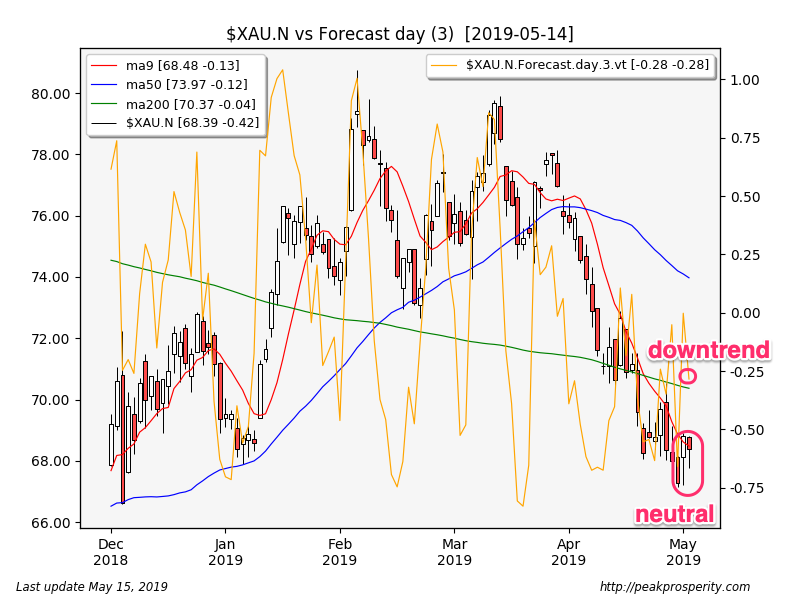 Platinum rose +0.27%, palladium moved up +1.11%, and copper rallied +0.18%. Platinum had a failed rally (shooting star candle), palladium managed to do reasonably well, while copper’s “bounce” looked extremely feeble. All the other metals remain in downtrends.

The buck moved up +0.20 [+0.21%] to 96.96. The swing low/confirmed southern doji looked reasonably strong (47% bullish reversal), and forecaster jumped higher, pulling the buck back into an uptrend. The buck is now back in an uptrend in both daily and weekly timeframes – and the monthly is relatively tentative. Another up day and the monthly probably reverses.

Crude rallied +0.55 [+0.90%] to 61.59. Most of the move came a few hours before the US open – but crude then ran into a wave of selling after the API report (crude: +8.6m, gasoline: -0.6m, distillates: +2.2m) came out at 4:30 pm. The API report ended up clipping about 40 cents off today’s rally. The spinning top candle was unrated, and forecaster jumped higher, moving crude back into an uptrend. While crude is in an uptrend in both daily and monthly timeframes, they are both fairly tentative trends. Crude really could go either way here – geopolitics, tariff wars, and the upcoming (probable) supply shortfall. Things looked pretty bearish yesterday…less so today.

SPX rallied +22.54 [+0.80%] to 2834.41. Much of today’s move came in the futures markets overnight; once the US opened, the rally continued, right up until about 2:45 pm – then the selling started, which knocked 15 points off the day’s move. The candle print was a bullish harami – actually a bearish continuation – and forecaster moved higher, but it was not enough to cause a reversal. SPX remains in a downtrend in both daily and weekly timeframes.

TLT fell -0.29%, retreating slightly after yesterday’s strong move. The short black candle was a bullish continuation, and forecaster dipped a bit but remains in an uptrend. TY inched down -0.02%, the doji candle was a bullish continuation, and forecaster moved slightly lower but remains in a strong uptrend. TY remains in an uptrend in all 3 timeframes. The 10-year treasury yield rose +1.4 bp to 2.42%. Today’s very modest dip suggests traders are hanging on to their bond positions – there was very little profit-taking even though we saw a rally in SPX.

JNK rose +0.22%, the bullish harami was a bearish continuation, and forecaster moved somewhat higher but remains in a downtrend. No reversal for JNK, although the downtrend remains relatively weak. The BAA.AAA differential did not move very much yesterday – it climbed just a single point. The credit world is not coming to an end just yet.

Yesterday we saw a large drop, today a small-to-medium-sized rally.  It appears that the risk-off downtrend remains in place.

They stopped pounding gold today – virtually no change in open interest.  Will they start in again if gold moves above 1300?

Miners and silver both have yet to reverse.  This is a sign that we’re in one of those safe haven moves for PM.  Those sorts of moves are great for gold as long as the danger is there, but if/when it vanishes, that knocks the pins out from under the gold price.  And silver tends not to participate as fully in the safe haven PM moves.

Oil is the real question mark for me.  Either it tanks (on prospects of a recession caused by the renewed tariff war) or it spikes higher (on a new war of choice with Iran).

Would someone please send that Bolton guy back to whatever hole he crawled out of?