Today was all about reality hitting the markets from the failure of the US-China trade negotiations. Trump fired off a number of tweets, which basically tried to reassure everyone that tariffs were no problem, China would pay them, and things would more or less all be well. Not to put too fine a point on it – the market wasn’t buying.

Gold chopped sideways-to-down until about 8:05 am, when it took off like a shot, shooting up $17 in about 90 minutes. It then moved slowly higher into the close. The confirmed bullish NR7 candle looked strong (50% bullish) and forecaster moved higher into its uptrend. With today’s move, gold broke cleanly above its recent trading range, broke above its downtrend line, above round number 1300, as well as the 50 MA. This is all really positive. Volume was extremely strong on the breakout. Gold is now in an uptrend in all 3 timeframes – so is Gold/Euros.

COMEX GC open interest rose +32,733 contracts. This is a massive increase in OI – 15 days of global production in new paper, a 6.3% increase in open interest in just one day. That’s 65% of a BRExit. This is the face of official intervention. If not for all that new paper – maybe its a $30 day? Perhaps more? Fully 7% of today’s trading volume was new paper.  This is another indicator: “the level of official concern.”  It is pretty high right now.

Futures are showing a 10% chance of a rate cut in June, a 42% chance of one rate-cut by December and an 29% chance of 2 rate cuts. The 2-cut chances have increased dramatically. 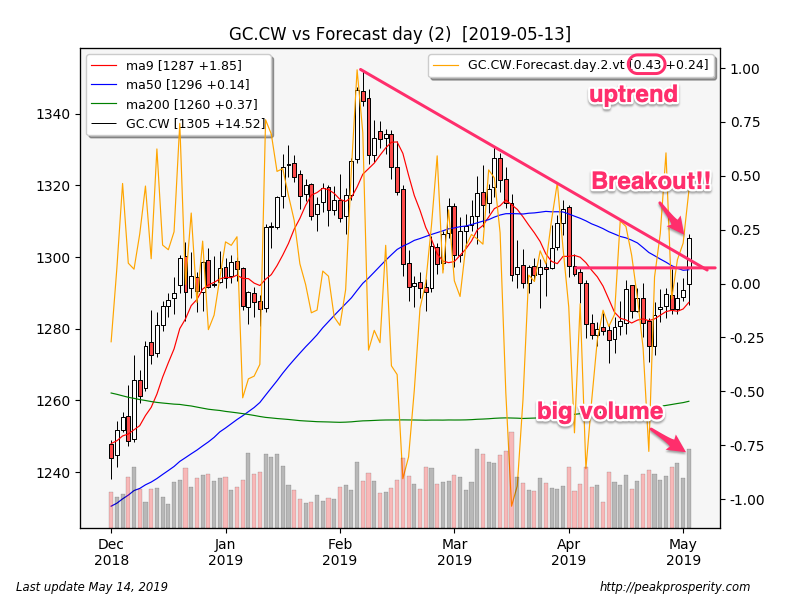 Silver fell in Asia and London – at one point it was down 17 cents – but it bottomed out at 8:05, and shot higher along with gold, managing to end the day flat. The doji candle was a bearish continuation, but forecaster moved higher, which was enough to pull silver into an uptrend. Silver remains in a downtrend in both weekly and monthly timeframes.

The gold/silver ratio jumped +0.98 to 88.25, which is a new 25-year high in the ratio. Normally I’d say that’s strongly bearish – but in this case, it indicates a very strong flight to safety into gold.  Silver looks torn between plunging copper, and rallying gold. 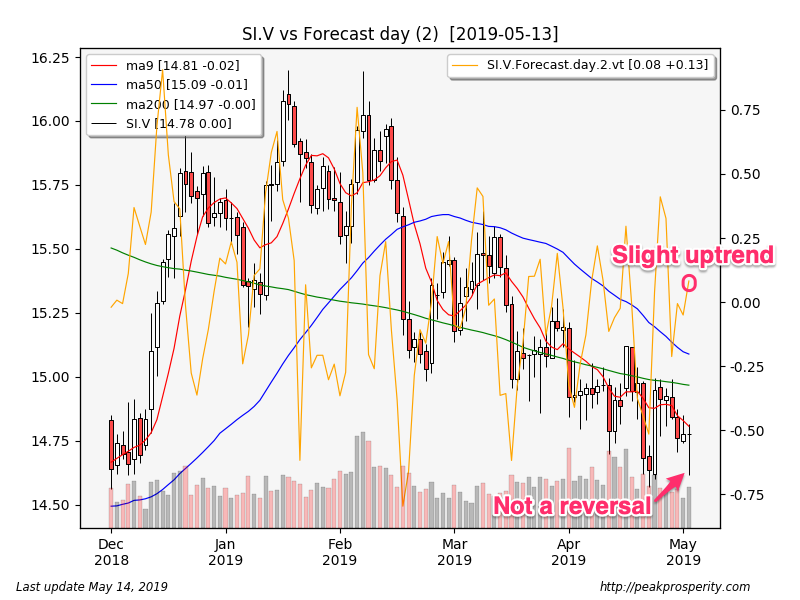 The miners gapped up at the open, dipped a bit in the first 40 minutes, and then rallied strongly for the remainder of the day. GDX shot up +3.21% on very heavy volume, and GDXJ climbed +3.10% on the highest volume in 5 months. XAU moved up +2.26%, printing a swing low (59% bullish), and forecaster shot higher, and is right on the edge of an uptrend. Today’s move took XAU back above its 9 MA for the first time in almost 5 weeks. Both GDX and GDXJ did manage to move into uptrends off today’s move. XAU is neutral on the daily, downtrend on the weekly, and uptrend on the monthly. 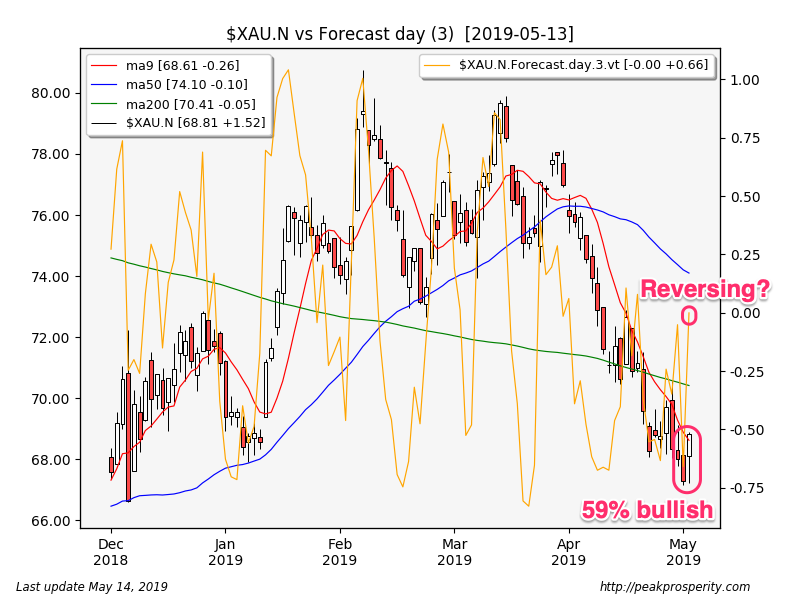 Platinum fell -1.37%, palladium dropped -2.29%, while copper plunged -2.37%. It is a minor miracle that silver managed to stay afloat given the plunge in copper, which has been in a (weekly) downtrend now for the past 4 weeks. Copper is telling us that China will not do well in the new 25% tariff environment. [Of course, falling SPX says the same thing about the US, to be sure.]

The buck was almost unchanged, down -0.02 [-0.02%] to 96.76. There was a big spike down at 8:05, at the time of gold’s big move higher, but the plunge reversed about 90 minutes later, with the buck moving right back up to even once again. The doji candle was a bearish continuation, and forecaster dropped into a fairly strong downtrend. The buck remains in a downtrend in both daily and monthly timeframes.

Crude fell -0.85 [-1.37%] to 61.04. Crude first rallied strongly – up almost $1.60 presumably on the news of the Saudi tanker attacks. Crude topped out at about 9:45 am, and then plunged about $2.70 over a 3 hour period. The shooting star candle was bearish (43%) and forecaster fell, dropping crude into a downtrend. Crude is now in a downtrend in both the daily and weekly timeframes, and is right on the edge of one on the monthly.

A war with Iran would cause oil to shoot the moon – the tariff war will pull it lower.  Its hard to know which one will prevail. Let’s hope Trump sees through any three-letter-agency (or “allied” nation) false flag moves.  Certainly from a “cui bono” analysis, both Saudi Arabia and Israel stand to gain if the US is goaded into attacking Iran.  Does the US gain from such a war?  Not that I can see.  And yet – we always seem to get persuaded to spend blood and treasure in spite of it all.  Another “war of choice” is being cued up by the usual bloodthirsty bipartisan gang in Washington.  Will Trump bite?  Will he survive if he doesn’t?

SPX plunged -69.53 [-2.41%] to 2811.87. SPX gapped down at the open in the futures markets, and sold off all day long, closing quite near the lows. The long black candle was a bearish continuation, and forecaster plunged deeper into a downtrend. The move also took the weekly forecaster into a downtrend too. While the monthly forecaster remains in an uptrend, the currently-forming monthly candle pattern is extremely bearish (71%). As with crude, I think we may well have seen the top in SPX also.

JNK plunged -0.85%, making a new low, with forecaster dropping into a downtrend. JNK is signaling risk off. Since BAA.AAA differential updates with a 1-day lag, we won’t know the effects of today’s moves until tomorrow’s close.

This is starting to look a whole lot like a replay of what happened back in October-December 2018.  Money is rushing into gold and bonds, while fleeing crude and equities.  Not even a massive increase in GC open interest was enough to stop today’s breakout in gold.  And that weekly top in SPX is looking pretty emphatic.

That said – in looking back at what happened last year, things were not a straight line path down.  Certainly the last 8 days of the move were an uninterrupted plunge, but for the rest of the time, there would be a drop, a rally, then another drop, etc.  So although the longer term signs are now starting to point down, its probably unwise to assume we will see an immediate, massive plunge to new lows.  I mean, it could happen, but it also might take the same form as it did last year – moving lower in fits and starts.

And we should expect Trump to tweet like mad.  Whether that works on the markets or not, that’s hard to know.  At some point, if all he does is tell lies, it will stop working after a time – that “boy who cried wolf” effect and all.  The same thing happened in 2008 as well; lots and lots of comments by the power structure about all sorts of interventions calculated to cause a large wave of short-covering.  Remember back when they outlawed short-selling of the financial stocks in the middle of the crash?  That was good for a massive, temporary rally in the bankster stocks.  It made for a bumpy ride.

We will just have to see how it goes.  This week’s COT report should make for some interesting reading. 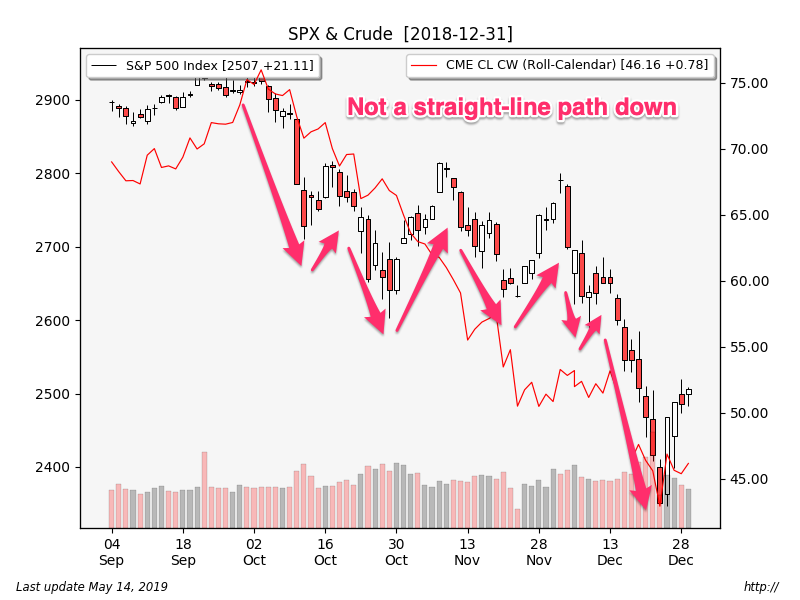