Gold rallied primarily during London trading hours, breaking out to a new high and holding most of those gains through to the close. The long white candle was a bullish continuation, and forecaster moved higher into what is now a reasonably strong uptrend. Today’s move was enough to unwind the monthly sell signal; that puts gold remains in an uptrend in both the daily and monthly timeframes.  The 1330 level is the next level to watch.  A close above that suggests we could see a more significant breakout – its also a logical place for the shorts to really load up.

Futures are showing a 3% chance of a rate cut in May, a 39% chance of one rate-cut by December and a 15% chance of 2 rate cuts. That’s a small increase over yesterday 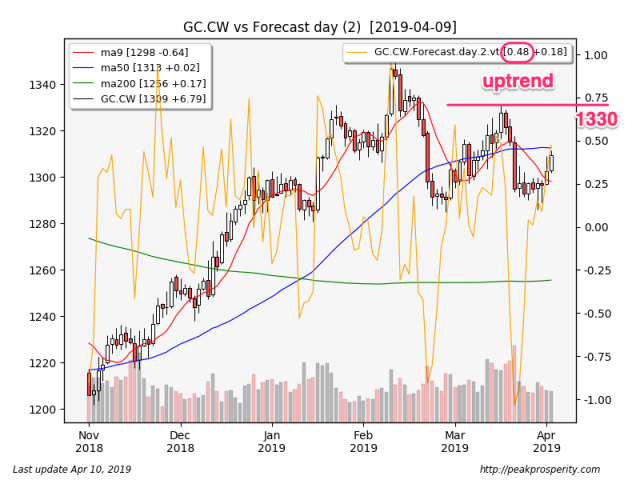 Silver tried to rally today but the rally failed, briefly making a new high to 15.31 but then selling off into the close. The spinning top candle was a bullish continuation (i.e. not a reversal), and forecaster moved higher, resulting in a buy signal for silver. Today’s move really did look as though it could be a reversal candle, but the candle code says otherwise.  Silver is now in an uptrend in both the daily and monthly timeframes. 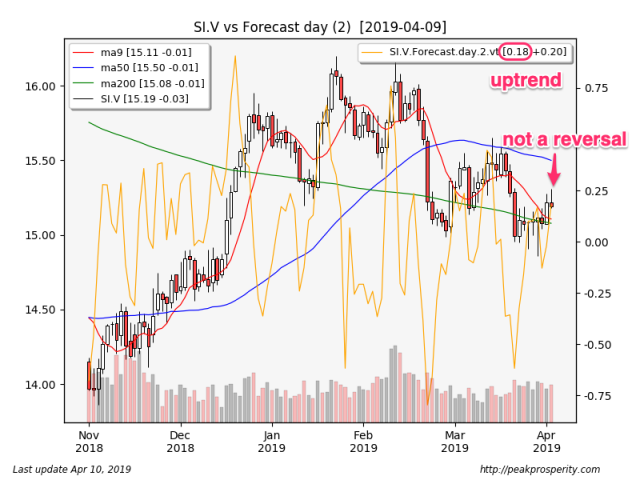 Miners gapped up at the open, fell a bit during the day, but then rallied back into the close. GDX rose +0.57% on light volume, and GDXJ moved up +0.62% on heavy volume. XAU climbed +0.21%, the NR7 candle was unrated, and forecaster moved slightly higher, remaining in a mild uptrend. XAU remains in an uptrend in all 3 timeframes. 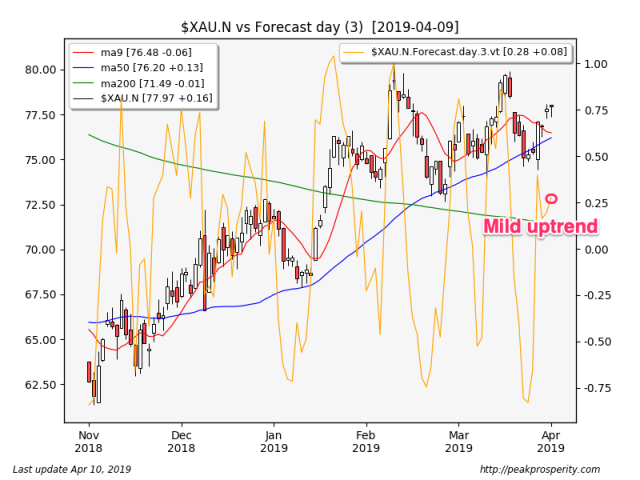 The buck fell -0.05 [-0.05%] to 96.45. The short black/spinning top was a bearish continuation, and forecaster dropped deeper into a downtrend.  In spite of the short term move lower, the buck remains in an uptrend in the weekly and monthly timeframes.

Commons passed May’s proposed BRExit extension plan (through June 30) by a 310 vote margin. May was compelled to bring her plan before Commons by yesterday’s historic act ordering her to do so. Tusk suggests that the EU should offer the UK a one-year extension, while France says a year is too long. One Tory suggested that the UK will “elect an army of Nigel Farage Mini-Mes” if the UK is forced to participate in the EU election.  The currency market still continues to project some sort of a soft BRExit.

JNK was unchanged, as was its forecaster. JNK remains in an uptrend.

Gold is slowly moving higher now – it really needs a close above the near-term previous high at 1330. Will this happen?  I see the shorts piling in on the way up, and the volume right now isn’t all that heavy.  The miners are moving higher, and that’s a plus, but the volume there isn’t all that exciting either.

I know that some of us are awaiting the top in equities. Is this it? There is no confirmation from junky debt, so it seems more likely that this is just a 1-3 day reaction move that we’ve been seeing all along during this current uptrend.  The longer term weekly and monthly charts support this thesis – they both remain in uptrends right now.  I’ll show you what I mean on the daily chart: 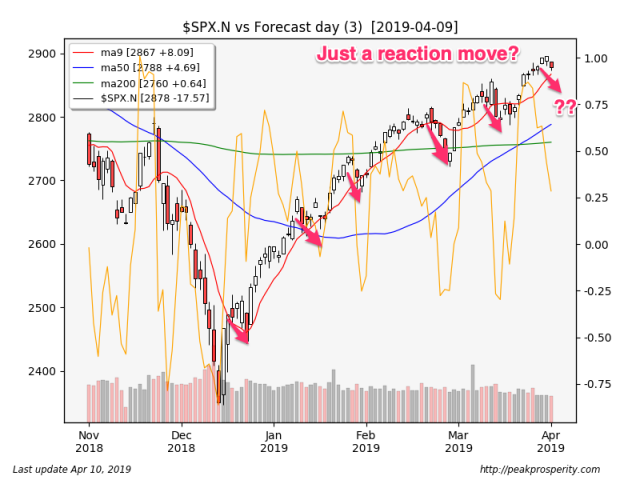 Armstrong believes that the capital flows from the EU are driving prices of US assets higher, and that the domestic-focused analysts tend to not notice such things, and so in situations like this, they end up making the wrong call.  Its just a thought.