Gold rallied steadily all day long, making its day high right around 9am, and then selling off afterwards. Gold’s intraday trading pattern did not seem to be driven by currency moves. The spinning top candle was a bullish continuation (and was also a 3-day swing low), and forecaster moved higher into an uptrend. Gold remains in a downtrend in the weekly and monthly timeframes.

Futures are showing a 4% chance of a rate cut in May, a 37% chance of one rate-cut by December and a 12% chance of 2 rate cuts. Rate-cut chances continue to decline. 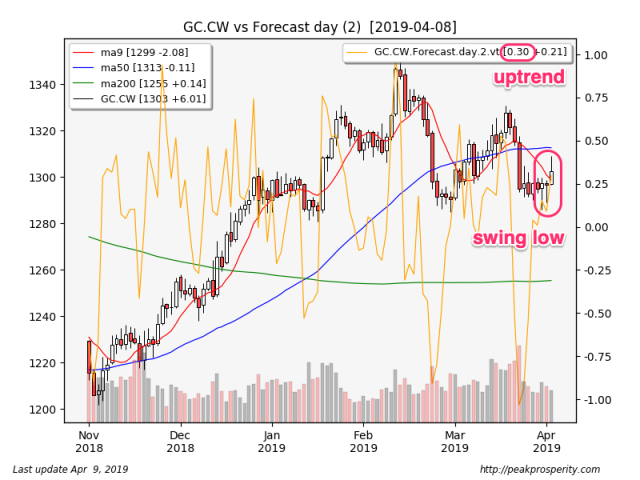 Silver mostly followed gold, except the selling pressure after 9am was not nearly as strong, resulting in a better-looking day for silver. The opening white marubozu was a bullish continuation (and also a 3-day swing low), and forecaster moved higher, but it was not quite enough for a buy signal. Silver did end the day back above both the 9 and 200 MA lines. Silver remains in an uptrend in both the daily and monthly timeframes. 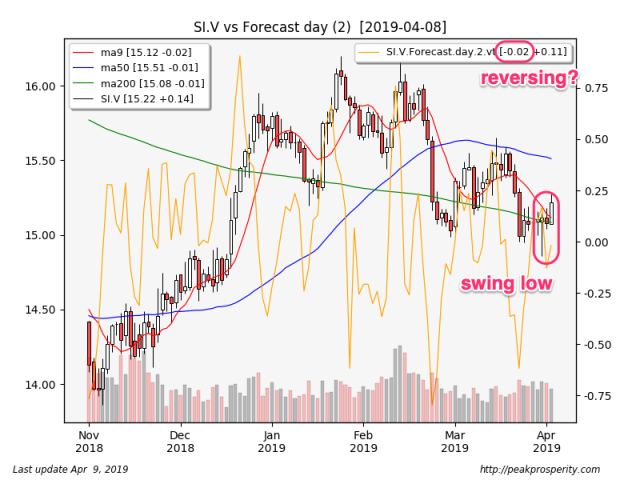 Miners gapped up at the open, and spent the rest of the day trading sideways. GDX climbed +1.16% on moderately light volume, while GDXJ rose +1.54% on moderately heavy volume. XAU moved up +1.26%, which is a new high. The short white/spinning top was a bullish continuation, and forecaster inched higher and remained in a mild uptrend. XAU remains in an uptrend in all 3 timeframes. 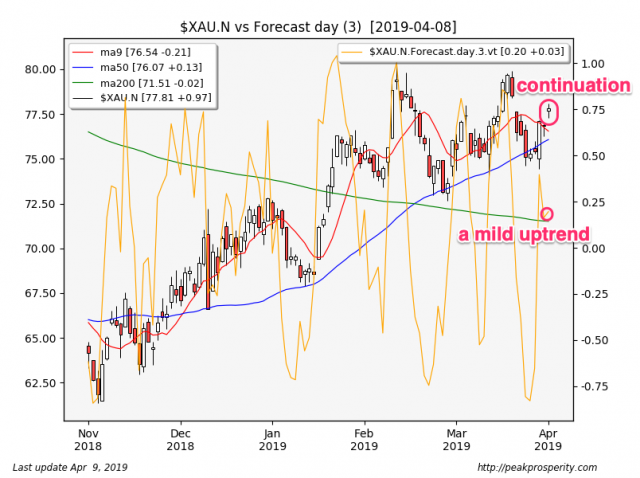 Platinum rose +0.94%, palladium climbed +0.88%, and copper moved up a big +1.56%. That’s a new high for platinum, copper may be heading for a breakout, while palladium continues to struggle after the big plunge off the highs.

The buck fell -0.37 [-0.38%] to 96.50. The confirmed bearish spinning top looked bearish (48% reversal), and forecaster inched higher but remains in a downtrend. The buck is in an uptrend in the weekly and monthly timeframes.

Commons appears to have seized control over the BRExit process; today it passed a withdrawal act appearing to prohibit a no-deal BRExit this coming Friday. The act requires May to extend the withdrawal schedule, and to set out of the length of time for the extension on Tuesday. If I understand things correctly, Parliament is ordering the government to do its bidding, which has never before happened in history. The act was passed 392 to 85.

Still an open question: will the UK participate in the EU elections?

Libya remains a mess. Any fighting there puts Libya’s production at risk, and the fighting is starting to pick up. The current military situation in Libya is one factor underpinning crude’s rally. An article at oilprice lays it out: https://oilprice.com/Energy/Energy-General/Oil-Markets-On-Edge-As-Military-Clash-Looms-In-Libya.html

Reading the wiki bio of the Libyan General at the heart of the current situation is…a bit overwhelming. https://en.wikipedia.org/wiki/Khalifa_Haftar. A former ally of Ghadaffi, then an enemy, then a CIA asset, and now? Who knows! This is a perfect candidate for a Rules for Rulers case study. Haftar has control over the oil & gas fields, and is now marching on Tripoli, the capital, with his army. He appears to have the upper hand. The UN wants elections. Anyone think that will happen?

SPX rose +3.03 [+0.10%] to 2895.77, which is another new high. Trading range was relatively narrow; SPX sold off a bit in the futures markets overnight, and fell in the first 15 minutes, but then bounced back to close back in the green. The short white/spinning top was a bullish continuation, but forecaster fell suggesting the uptrend may be fading a bit, but it was not enough for a sell signal. SPX remains in an uptrend in all 3 timeframes.

TLT fell -0.03%; the short black candle was a bearish continuation, and forecaster inched lower, which was enough for a tentative sell signal for TLT. TY fell -0.15%. It also printed a short black candle which was a bearish continuation, and forecaster dipped a bit lower into a downtrend. Even so, TY remains in an uptrend in the weekly and monthly timeframes.   While bonds dribble lower, the long term uptrend remains largely intact.  The 10-year treasury yield rose +1.8 bp to 2.52%.

JNK fell -0.03%, basically no change. JNK remains in an uptrend.

Both gold and silver managed to break out of their recent trading range today, and miners move closer to a breakout.  It sure looks as though the drop in PM was all just a game by the commercials two weeks ago, and there is reasonably good support for gold around 1300 and silver around 15.

And at least for right now, it appears to be a perfect storm for crude.  Military moves in Libya, the potential for reducing US waivers on Iran, steadily declining production from Venezuela, underinvestment in US shale due to the price crash 3 months ago (shale responds very rapidly to price changes these days), and Saudi Arabia cutting production more than expected, all of that lines up to keep prices moving higher.

At some point this will have a negative economic impact, but I’m not sure that happens at $64/bbl.