Gold sold off hard during London trading, making a new low to 1284.90, but then rallied back managing to end the day in the green. The high wave candle was mildly bullish (37% reversal) and forecaster moved higher, resulting in a buy signal for gold. The high volume, strong rebound, and the new low does suggest this could be a reversal. Gold remains in a downtrend in the weekly and monthly timeframes.

Futures are showing a 4% chance of a rate cut in May, a 39% chance of one rate-cut by December and a 15% chance of 2 rate cuts. This is a large decrease in rate-cut chances over yesterday. 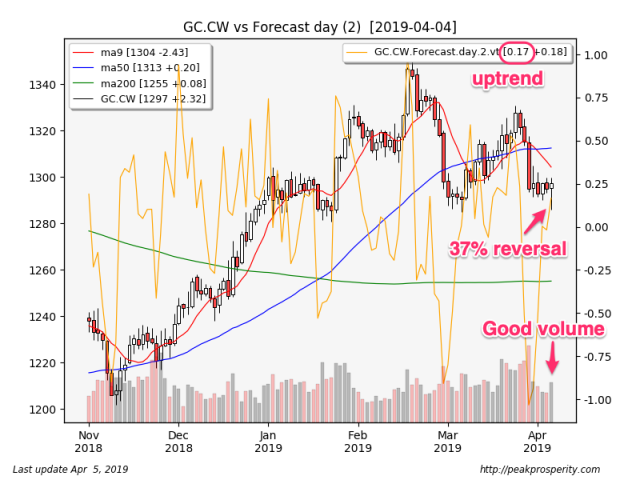 Silver looked similar to gold; selling off in London, then rebounding during US hours. Silver too made a new low to 14.86; this invalidated yesterday’s swing low. Still, the high wave candle was bullish (42% reversal), and forecaster moved a bit higher into its uptrend. Silver remains in an uptrend in both the daily and monthly timeframes. Similar to what happened on Tuesday, buyers appear when price drops below 15. That’s a good sign.

COMEX SI open interest rose +3,819 contracts. The shorts continue to build – unlike with gold, there was no short-covering on the spike down. 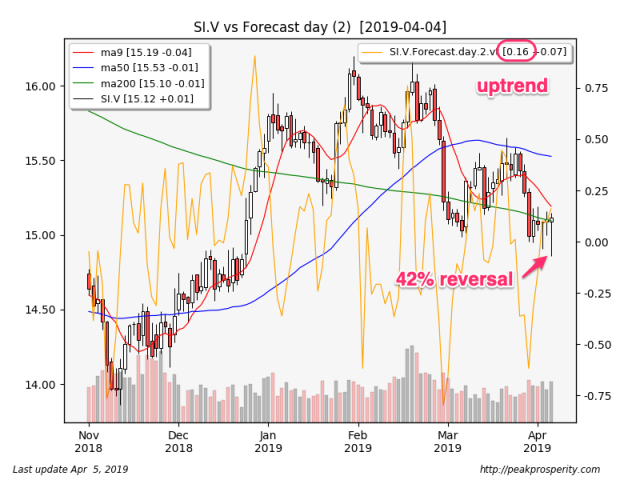 Miners gapped down at the open, fell for the first 10 minutes, and then spent the rest of the day screaming higher, closing almost at the highs. GDX climbed +1.95% on on moderately heavy volume, while GDXJ moved up +2.06% on moderately heavy volume also. XAU jumped +2.21%, the long white candle looked strong (42% reversal), and forecaster jumped higher, resulting in a strong buy signal for the miners. The rally pulled XAU back above both the 9 and 50 MA lines, and it unwound the monthly sell signal. XAU is now in an uptrend in all 3 timeframes. 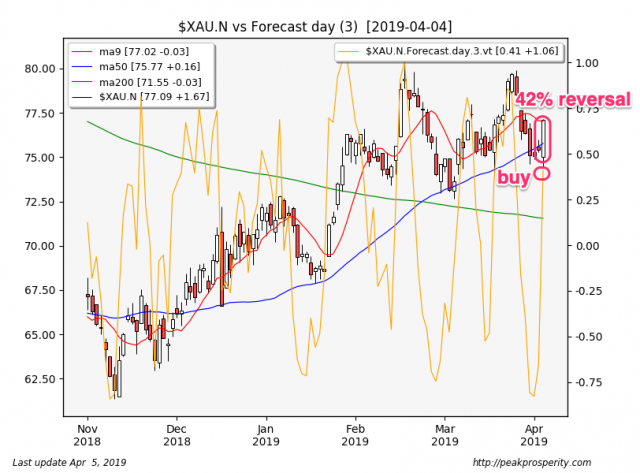 Platinum leapt higher [+3.41%], palladium plunged [-2.96%], whie copper moved down -0.92%. These were some big moves – platinum’s breakout to a new high has been months in the making. Today’s volume was immense. The breakout even showed up on the monthly chart (below).  It looks as though money is flowing from palladium into platinum.  Perhaps – industrial users are shifting from the one to the other? 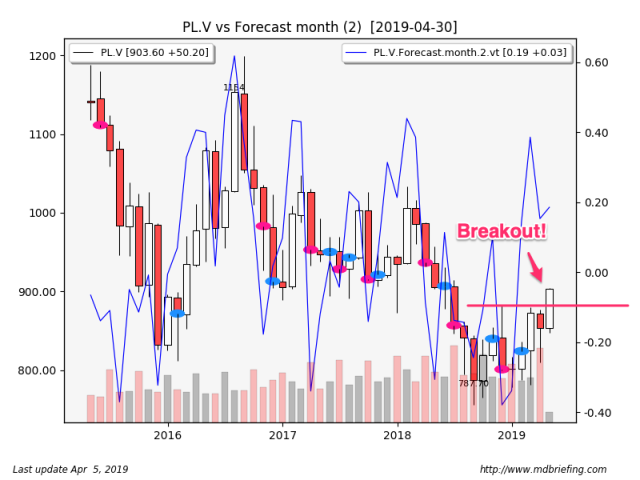 The buck rose +0.26 [+0.27%] to 96.80, entirely reversing yesterday’s drop. The bullish engulfing looked strong (61% reversal), but forecaster moved lower, issuing a sell signal for the buck. That puts the buck in an uptrend in the weekly and monthly timeframes.

Commons voted yesterday to order May to seek an extension to article 50, and avoid a no-deal BRExit. The measure passed by 1 vote. This was seen as an insurance policy against May deciding to go for no-deal BRExit on April 11th. This, alongside statements made by Juncker yesterday, would seem to imply that the UK will end up with a long extension to article 50, perhaps a year, and as a result it will be voting in the upcoming EU elections in May.  BRExit, the never-ending story, appears as though it will continue.

Rumor has it that many in the UK are thoroughly sick of the subject, as is the EU.

Crude moved down -0.29 [-0.46%] to 62.27. Crude traded slightly lower in a narrow range; the short black candle was a bullish continuation, and forecaster fell, but remained in an uptrend. Crude is in an uptrend in all 3 timeframes.

SPX climbed +5.99 [+0.21%] to 2879.39. That’s yet another new closing high for SPX. The short white/NR7 was unrated, and forecaster fell, but remains in a fairly strong uptrend. SPX remains in an uptrend in all 3 timeframes.

TLT rose +0.28%. The short white candle was a bearish continuation, but forecaster jumped sharply, but not quite enough for a buy signal. TY climbed +0.08, the bullish harami pattern was a bearish continuation, and forecaster moved up strongly but not enough for a buy signal. TY remains in an uptrend in the weekly and monthly timeframes. The 10-year treasury yield fell -0.5 bp to 2.51%.

JNK rallied +0.20%, continuing its slow, steady rise. JNK remains in a shallow uptrend. Yet junky cousin HYB continues to fall. Again, I’m not quite sure why that is – they usually move in parallel.

While platinum’s breakout overshadowed most everything else in the metals space, gold and silver both looked fairly strong today after a plunge to new lows was bought.  Miners looked especially good – the intraday rally looked both steady and strong.  Is this a general reversal for the metals?  It might be.  For gold to rally when the dollar moves higher, that’s a positive sign too.  I still think we need confirmation tomorrow for gold and silver.

One possible issue: the prospect of future US interest rate cuts is steadily declining – from a high of 70% not long ago down to the current rating of 39%.  Both bonds and gold could suffer selling pressure as a result.

Its an improvement over last month, but manufacturing is contracting (MANEMP: -6k), as is retail (USTRADE: -11.7k).  Professional & business services did well (USPBS: +37k).

This lines up with the recent picture: goods economy is weak, but services remain strong.

And while we are seeing more workers that are working part time for economic reasons, the ‘only PTW available’ category dropped (LNS12032196: -18k), so its not a clear danger sign.

My guess: this should reinforce the “no recession now” case.

Dave, any indications that the KSA Ghawar story is hitting oil prices?

The payrolls report is less trustworthy than an urgent request for my bank account info from a blocked phone number.

Note that construction jobs are once again powering higher, in an unbroken line, month after month, and way higher than a year ago despite construction spending being dead flat from last May to now.

Maybe somebody should tell the construction companies that they are wildly over-staffed?

Given Trump’s solid and apparently very effective leaning on Powell what chance do you think a schleppy BLS staffer has when called to the Oval carpet?  I would place that at “low” to “none.”

LBJ was good at it.  Trump, who leaves no market weakness to chance, is probably as good but less restrained.

The payrolls report is less trustworthy than an urgent request for my bank account info from a blocked phone number.

People’s Exhibit #1 on why I love your writing style.

I wonder if it’s too jaded of me to basically ignore most any number I read from any mainstream or official source when it comes to the economy.

Setting aside the cognitive dissonance between these comments and Trump’s repeated claims that the US economy is doing “really, really well” and that companies are preparing to announce that they’re “coming back” to the US…

Because economy is so strong

…Trump’s comments show that he won’t let up the pressure on Jerome Powell after reportedly trying to replace him with Kevin Warsh, and declaring Powell one of the worst hires of his administration.

“I personally think the Fed should drop rates, I think they really slowed us down, there’s no inflation, in terms of quantitative tightening, it should really be quantitative easing…you would see a rocket ship. Despite that, we’re doing very well.”

…except for the stuff I have to pay for, and I’ve already averaged down all I can by filling the house with negative cost TV sets.  Bang, zoom, to the moon.

I don’t think Trump is clever enough to pound down the “works part time/economic reasons/only part time work is available” indicator.  Headline PAYEMS, maybe.  But I just don’t think he gets that far down into the weeds.

How close we don’t know…

…but I doubt PAYEMS matches his ability to focus, if you know what I mean.

Mostly the line now is that Saudi Arabia is cutting production more than it signed up to do, Venezuela continues to have problems, and now Libya is having internal issues too.  And shale is not receiving the investment it did a few years back, so it is setting up to decline also.

My sense is “no” – the worries seem more tactical.