Gold moved lower in a narrow range. Really not much happened today.  The short black candle was mildly bearish, and forecaster inched lower, issuing a very tentative sell signal for gold. Gold is in a downtrend in all 3 timeframes, although the short term direction looks very unclear.

Futures are showing a 5% chance of a rate cut in May, a 62% chance of one rate-cut by December and a 20% chance of 2 rate cuts. This is a slight increase in rate-cut chances over yesterday. 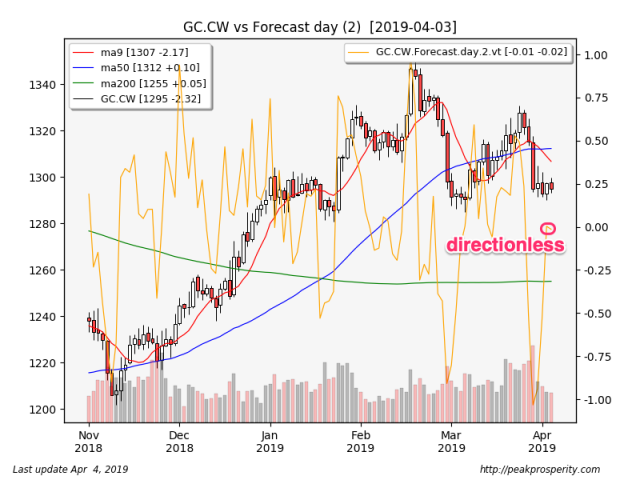 Silver tried to rally, then sold off, then bounced back to just above even. Today’s slight rally was enough for a swing low (59% reversal), and forecaster edged down but remains in a slight uptrend. Silver is now just barely back above the 200 MA, and remains in an uptrend in both the daily and monthly timeframes. Is this confirmation from yesterday’s dragonfly doji? The candle code says yes; the rating it gave to the swing low was quite high. So maybe this is the low for silver, at least for a time anyway. 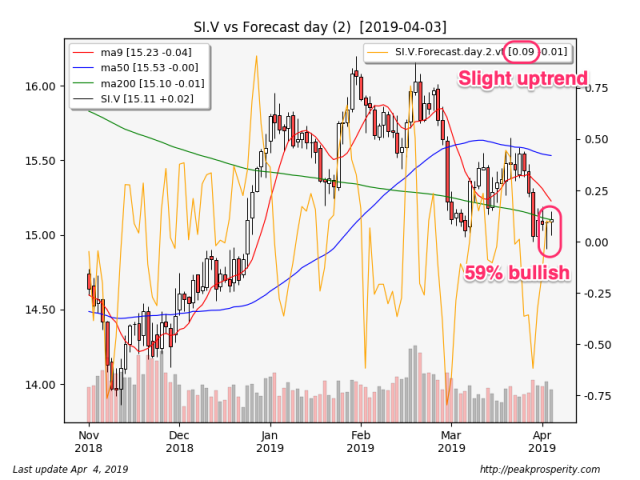 Miners tried to rally but generally failed; GDX fell -0.14% on very light volume, while GDXJ rose +0.39% on moderately light volume. XAU rose +0.19%, the short black candle was a bearish continuation, while forecaster moved a bit higher but remains in a strong downtrend. XAU remains in a downtrend in both daily and weekly timeframes. 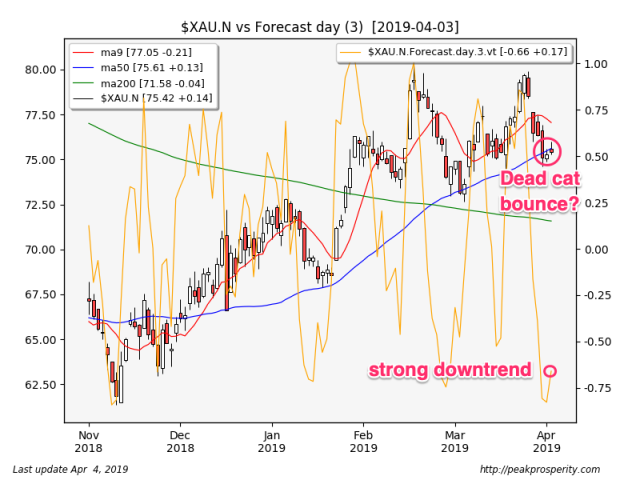 Platinum rose +2.14%, palladium fell -1.69%, while copper climbed +1.19%. Copper is back in a short-term uptrend, and platinum made a new multi-month closing high. Platinum could be setting up for a breakout – it is in an uptrend in all 3 timeframes. Hmm, that’s the first time I noticed this about platinum. If platinum starts to rally more enthusiastically, that should help gold.

The buck fell -0.27 [-0.28%] to 96.54. There were a bunch of candle patterns, all bearish: call it a swing high (50% reversal), and forecaster plunged but not quite enough for a sell signal. The buck remains in an uptrend in all 3 timeframes, but the daily may be setting up for a reversal.

Unelected EC President Juncker informed the UK today that there will be no short extension for the UK. As I understand it, the options are: May’s Unconditional Surrender by April 12th, hard BRExit April 12th, a long extension through 2020, or a cancellation of Article 50.

Crude moved down -0.09 [-0.14%] to 62.56. Crude made a new high today but fell back; the high wave candle was a bullish continuation, but forecaster fell, leaving crude still in a strong uptrend. The market seemingly shook off a fairly bearish EIA report (crude: +7.2m, gasoline: -1.8m, distillates: -2.0m). Crude is in an uptrend in all 3 timeframes.

TLT fell -0.87%, making a new low; yesterday’s minor bounce turned out to be a dead cat sort of move. Forecaster moved higher but remains in a strong downtrend. TY fell too, losing -0.29%. TY also made a new low, forecaster moved lower, remaining in a very strong downtrend. But even with today’s drop, TY remains in an uptrend in the weekly and monthly timeframes. The 10-year treasury yield rose +3.6 bp to 2.52%.

JNK moved up +0.03%, another day of sideways movement. It was enough for a mild sell signal on the forecaster. HYB continues to decline, however; it is slowly moving lower. Which do we believe?

Not much happened in PM today; there were hints of a rebound in silver, but that’s about it.  Bonds made new lows, and SPX eeked out a new high.  Platinum was the only interesting mover; it may be forming a long term low here.