Gold moved lower for most of the day, bottoming out around 10:30 am. The dark cloud cover candle was a bullish continuation, and forecaster moved lower, but remains in an uptrend. Gold is in a downtrend in both weekly and monthly timeframes.  Intraday, from what I saw, the thing that stopped gold from dropping further was a rally in the Euro and/or the drop in the buck, which started around 10:30 am.  However the candle patterns for GC.EUR looked quite similar to gold – and in fact the pattern was less bearish for GC.EUR, and its forecaster only moved slightly lower. 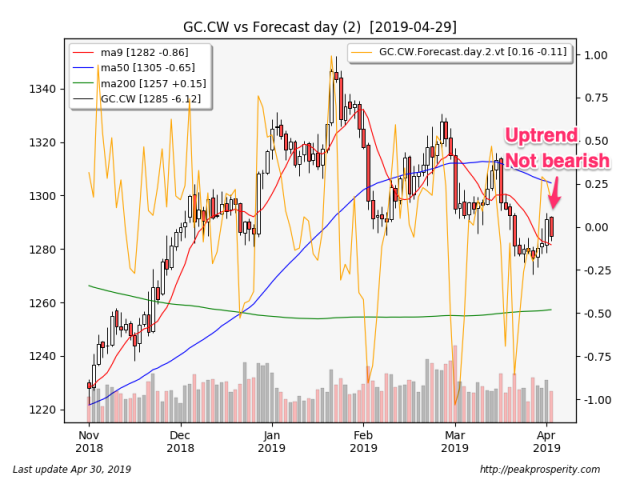 Silver also fell for much of the day, bottoming out at 9:30 am. The opening black marubozu was mildly bearish (37% reversal), and forecaster fell just enough to flip silver back into a daily downtrend. Silver still remains in an uptrend in both the weekly and monthly timeframes. 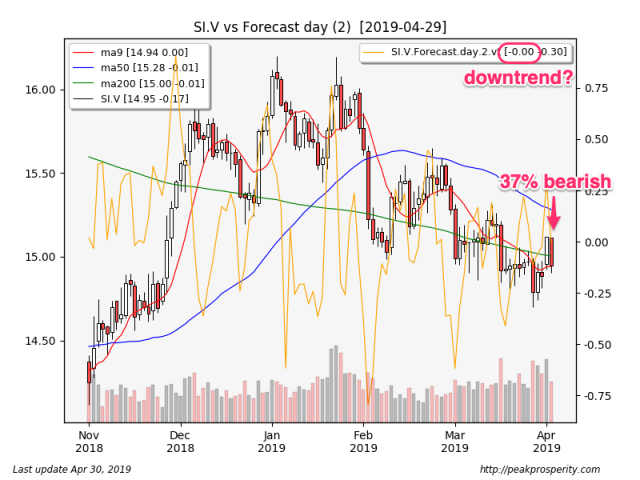 The miners dropped hard in the AM, finally making a low in early afternoon, and then moved up slightly into the close. GDX dropped -2.16% on moderate volume, while GDXJ fell -2.66% on very heavy volume. XAU plunged -2.47%, wiping out last week’s gain. The candle pattern was bearish (48% reversal), and forecaster fell, dropping into a downtrend. XAU is now back in a downtrend in all 3 timeframes.  XAU is now back below all 3 moving averages.  Miners don’t look great. 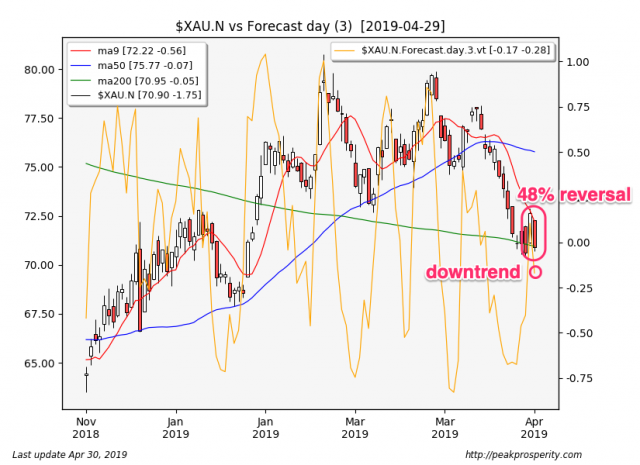 The buck fell -0.16 [-0.16%] to 97.30. The long black candle was a bullish continuation, and forecaster fell hard, but remains in an uptrend. The buck remains in an uptrend in all 3 timeframes.  It was the dollar drop (intraday) that saved gold from a more emphatic move lower.

There were no large moves in the currency market.

Crude rose +0.75 [+1.19%] to 63.64. The bullish harami candle was actually a bearish continuation, and while forecaster jumped, it remains in a downtrend. Crude remains in a downtrend in the daily and weekly timeframes.  COT report for crude, which I just looked at today, shows crude at a likely reversal point.  Managed money is overbalanced in their net long position, and has almost no shorts remaining.  I’m not sure this is a major turning point, but crude could easily drop for a while based on this situation.

JNK was unchanged, and remains in an uptrend.

While the miners had a pretty unpleasant day, gold (and maybe more importantly, gold/Euros) actually still looks all right.  No reversal there yet.  That’s not to say one couldn’t happen, just that it hasn’t happened just yet.  Silver is somewhere in the middle – it is right on the edge.

Bonds dropped too, although no bearish reversal there either.  The new high in equities looked relatively feeble.

The Personal Income & Spending report showed a large rise in spending (+0.9% m/m), but a very small rise in income (+0.1% m/m).  How does that happen?  My guess: credit cards.  It also might be an artifact of pent up spending following the end of the government shutdown.  Core PCE was flat – no change m/m.  “There is no inflation.”  I have one word for them: sickcare.

Econoday suggested that a flat core PCE increases the chances of a rate cut.

Due to the crazy amounts of worldwide QE, we have witnessed the Everything Bubble, but commodity prices are at multi-year lows. Why is this? Is it because the availability of capital has lead to excess production capacity? In the way that easy money has allowed the proliferation of fracking, has there been a similar effect in other commodities?

Is there a historical precedent for this?

I’m not sure its about availability of capital – at least not with industrial metals.  Although I do think that’s the case with shale.

I think at least part of the metals problem has to do with China.  They did their massive buildout in 2000-20011, and the metals companies decided to go out and construct mines based on China’s growth rate during that period.

Now China has built most of what it needs, the growth rate is no longer what it was, but all those mines remain in place.

Supposedly these mines have 20 year lifespans.  So the mines built in at the peak in 2008 will be around until 2028.  At some point, the miners will simply stop opening new mines because its not profitable, and so there will come a time when the glut we have now will end up in shortage at some point in the future.

Rick Rule talks about that over at KWN – its just the commodity cycle, driven by over-optimistic miners at the peak, with the timeframe built around expected mine life.  Once the mine has been constructed, keeping it running is much cheaper – cash costs vs all in sustaining cost.

This is true for industrial metals, certainly, and probably PM too, at least to some degree. Silver is a byproduct of copper and other industrial metal mines, so its production is at least somewhat immune to low silver prices.

Given Palladiums meteoric >200% rise in the last 3 years some pull-backs are to be expected I guess, but the last time Palladium plunged like this (for whatever reason, at the end of March) it did end up pulling the whole PMs complex with it. Isn’t there a good chance the same could happen again Dave?

Well today it was a massive plunge in copper that dragged silver down.  Boy.  10 cents is a big move.  Looks like there is some support at 14.70 but…not sure how long that lasts.