Gold moved slowly higher during the day, spiking up just before the US open, then falling back – but still managing to keep some of the gains into the close. The high wave candle: bullish continuation, and forecaster jumped higher, flipping gold back into an uptrend. This was also a 3-candle swing low for gold. Lastly, the weekly bullish harami candle pattern currently forming could also be a reversal (47%), but we have to wait for Friday’s close. Gold remains in a downtrend in both weekly and monthly timeframes.

Futures are showing no chance of a rate cut in May, a 41% chance of one rate-cut by December and a 20% chance of 2 rate cuts. Rate cut odds are slowly increasing once again. The increase in bearishness is probably helping to support gold. 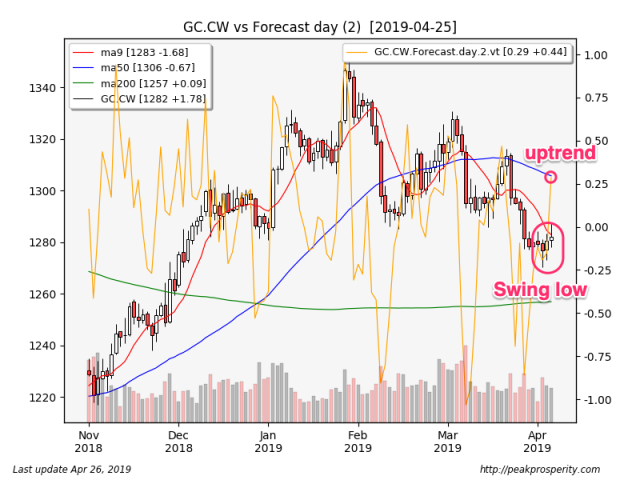 Silver mostly just chopped sideways today, ending the day slightly in the red. The spinning top candle was slightly bearish (27% reversal), forecaster inched higher, leaving silver in a very slight downtrend. Silver remains in a downtrend in both the daily and weekly timeframes, but the trends in silver in all timeframes are only slightly bearish – things really could go either way. On the chart, I see some key resistance at the confluence of the downtrend line, round number 15, and the 200 MA. Its a logical place to go short; as a result, any close above this level could lead to some bullish excitement, especially if the COT report is ready to reverse. You have to honor the current downtrend, but things seem right on the edge right now. Silver has managed to hang in there in spite of a huge move down in copper, and a large rally in the buck.

COMEX SI open interest fell -4,851 contracts. That’s a big change – 10 days of global production in paper, gone, more than 2% of the open interest. That was probably a lot of short-covering, and I’d call that bullish. 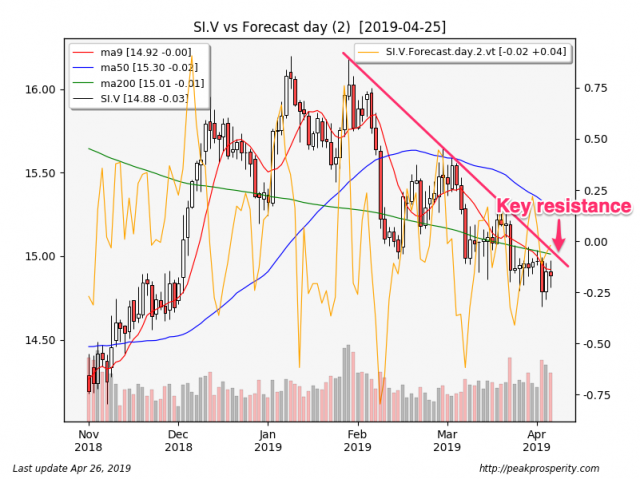 The miners rallied for the first hour, and then sold off for the rest of the day, closing at the lows. GDX fell -0.71% on light volume, while GDXJ fell -0.44% on moderate volume. XAU plunged -1.51%, the bearish engulfing candle was surprisingly neutral, while forecaster inched higher but remained in a downtrend. XAU remains in a downtrend in all 3 timeframes. It was an ugly day for the miners – gold ok, silver so-so, but the miners sold off – and pretty hard too. 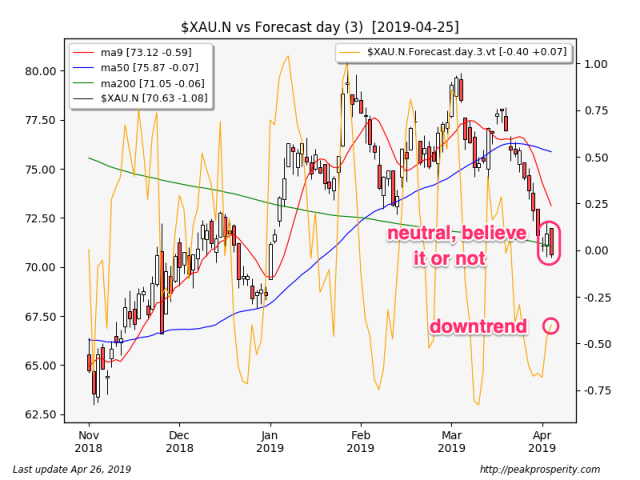 The buck inched up +0.06 [+0.06%] to 97.66, which is another new multi-year high for the buck. The spinning top candle was a bullish continuation, and forecaster moved higher, and is now in a very strong uptrend. The buck remains in an uptrend in all 3 timeframes. This recent move in the buck is the result of a breakdown in the Euro, which ended the day at 111.33 – a price level we haven’t seen since mid-2017. Money is fleeing Europe for the US. Once it gets here, it parks somewhere: equities, treasury bonds, junky debt, etc. 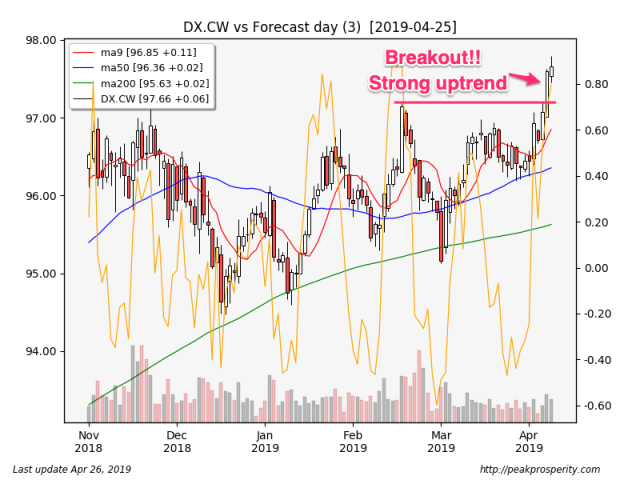 Crude fell -0.63 [-0.96%] to 65.15. Oil was chopping sideways today, until 2pm, when crude fell off a small cliff, dropping about 90 cents in 30 minutes. I’m not sure what the move was about. The long black candle was a bearish continuation, and forecaster dropped hard, flipping crude into a downtrend. Today was also a 3-candle swing high for crude. Crude is in an uptrend in the weekly and monthly timeframes.

SPX moved down -1.08 [-0.04%] to 2926.17. SPX actually sold off at the open, bounced back, and then sold off a bit into the close. The high wave candle was a bullish continuation, and forecaster ticked higher, remaining in a reasonably strong uptrend. SPX remains in an uptrend in all 3 timeframes.

JNK inched up +0.03% – JNK continues to chop sideways – it has been relatively trend-less for the past week..

So what to make of all this? The dollar breakout that happened on Wednesday is probably the most interesting recent move; that and the fact that gold has remained relatively steady. That tells you that gold/Euros is rallying. Money continues to pour into the US, most likely due to bad news in Europe, but there is a slowly increasing bearishness in the US too, seen in the steady increase in rate-cut probability.

In a recession watch update, Durable Goods came in strong today; new orders were up +2.7% m/m; mostly that was aircraft orders (a 60% gain – likely Boeing) and a much more modest 2.1% increase in motor vehicle orders. Still, those are m/m increases, which makes for large moves when annualized.

The durable goods timeseries isn’t very long-lived though, so its hard to say how predictive it might be. A drop in orders did precede the 2002 recession, but orders did not drop until after we were in recession in 2008.

Silver is showing some recent short-covering.  If it can close above 15, and that COT report is ready to reverse, we could see some fireworks.  But if silver just slowly dribbles higher right up to the downtrend line – I’d expect another leg down.

Miners are looking ill right now.  They are not predicting anything good, and they do tend to lead.