Gold moved lower all day long, spiking down at 8:30 am, making a new low to 1267.90, then bouncing back a few hours later. The hammer candle was somewhat bullish (35% reversal), but forecaster ticked lower, and remains in a mild downtrend. Gold remains in a downtrend in all 3 timeframes. The spike down in gold today was fairly closely related to a plunge in the Euro that happened at about the same time – gold’s minor move was just a currency effect.

COMEX GC open interest rose 2,428 contracts. Hmm, I would have expected commercials to cover on the drop; perhaps they were outweighed by managed money going short.

Futures are showing no chance of a rate cut in May, a 40% chance of one rate-cut by December and a 15% chance of 2 rate cuts. That’s slightly more bearish than yesterday. 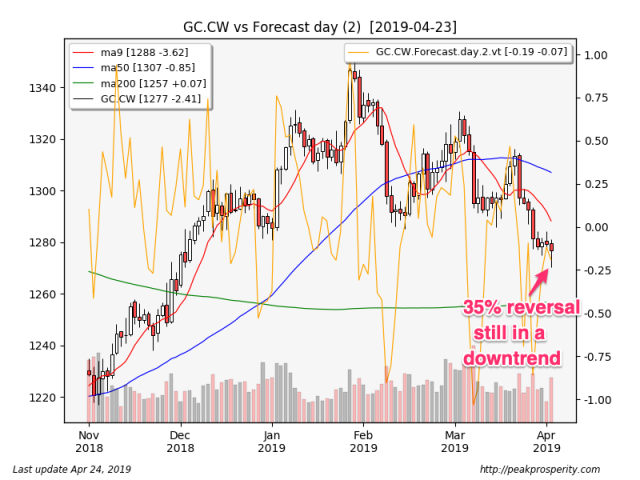 Silver moved lower for the first half of the day, and then plunged along with gold (and the Euro) at 8:30 am, making a new low to 14.70, before bouncing back somewhat into the close. The strong line/bearish engulfing print was quite unpleasant (60% bearish) and forecaster dropped; silver is now in a downtrend in both the daily and weekly timeframes. Volume today was very strong – a bad sign. 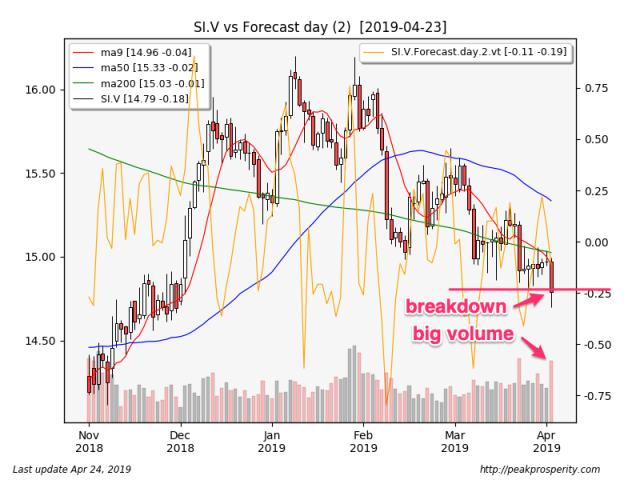 The miners gapped down at the open, tried to rally, but generally failed. GDX fell -0.76% on light volume, while GDXJ dropped -0.52% on moderately heavy volume. XAU moved down -0.75%, the southern doji candle was a bearish continuation, and forecaster remained in a strong downtrend. Today’s move caused the monthly to issue a sell signal. This puts XAU in a downtrend in all 3 timeframes. Miners did have a bid today – I suspect if the metals had done better, we might have seen a reversal. 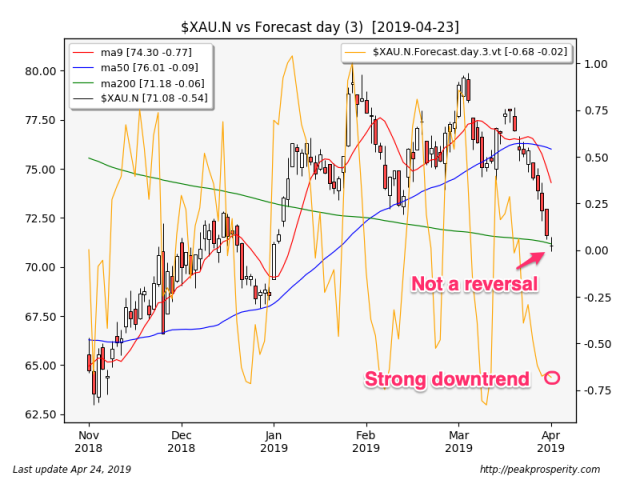 The buck shot up +0.36 [+0.37%] to 97.07, managing to close back above round number 97. The opening white marubozu was a bullish continuation, and forecaster jumped higher, and is now in a moderately strong uptrend. The buck remains in an uptrend in all 3 timeframes – and it does look as though it is preparing to break out to new highs in the near future.

Crude continued moving higher, up +0.49 [+0.75%] to 66.14, which is another new high for crude. The long white candle was a bullish continuation, and forecaster moved higher, and is now in a very strong uptrend. Crude remains in an uptrend in all 3 timeframes. After market close, the API report was fairly bearish (crude: +6.9m, gasoline: -1.8m); the report took 15 cents off the day’s gain.

SPX jumped +25.71 [+0.88%] to 2933.68. This resulted in a new all time closing high for SPX. The opening white marubozu was a bullish continuation, and forecaster jumped higher, which puts SPX in a reasonably strong uptrend. SPX remains in an uptrend in all 3 timeframes.

The new highs for SPX (which of course Trump promptly took credit for) happened right alongside a mild rally in the 10-year, a move higher in crude, and a rally in the buck.  It sure looks as though money is flowing into the US.

Silver looked terrible today; it was pounded through support, the move down triggered by a plunge in the Euro – but the main problem was that the buyers who were there all last week just didn’t show up today. Gold looked substantially better, and the miners were somewhere in the middle. With the buck about to break out to higher levels, I’m a little concerned that we could have farther to fall in the metals.

Its hard to see how the metals can rally while the buck and SPX both continue to move higher, given the correlations I’ve observed over the past six months. With SPX making new highs – who needs gold?

Don’t look now, but gold is rallying even though the dollar has broken out to a new high.  Decent rally in the 10-year too.

Not something I expected.