Gold tried to rally in Asia but the rally failed an hour before the US opened; the short black/spinning top candle was a bearish continuation, and forecaster moved higher but remains in a slight downtrend. Gold remains in a downtrend in all 3 timeframes. Gold failing to rally on a day when the buck fell: not a good sign. There was no sign of a reversal today.

Futures are showing no chance of a rate cut in May, a 37% chance of one rate-cut by December and an 11% chance of 2 rate cuts. There are now starting to be faint hints of a rate increase in December. 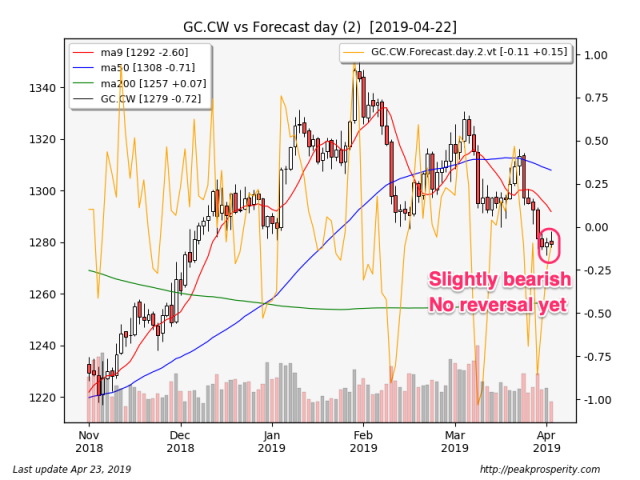 Silver also rallied in Asia, and then slowly lost ground for the remainder of the day. The northern doji candle was a bullish continuation, and forecaster moved lower but remains in a mild uptrend. Today’s move was enough for the weekly forecaster to flip to an uptrend. This puts silver in an uptrend in all 3 timeframes, although the trend is quite tentative at this point. On the silver daily chart, I’m seeing a medium term pattern of a brisk drop, followed by a mild reaction rally, followed by another brisk drop making a new low. Silver could be preparing for yet another brisk drop in the near future. We might have one more of these in our future before the COT report shows silver as ready to reverse. 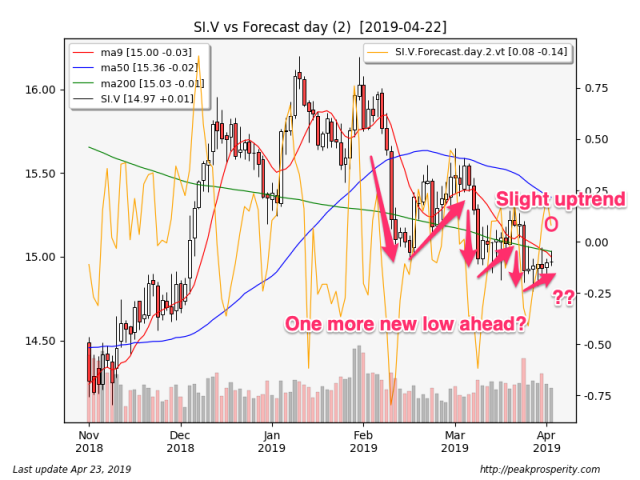 In spite of gold remaining mostly even, miners sold off all day long. GDX fell -1.69% on moderate volume, while GDXJ dropped -2.06% on heavy volume. XAU fell -1.74%, the opening black marubozu candle was a bearish continuation, and forecaster was unchanged, and remains in a strong downtrend. Miners are in a downtrend in both the daily and weekly timeframes. The miners looked terrible today – not even a hint of good news. 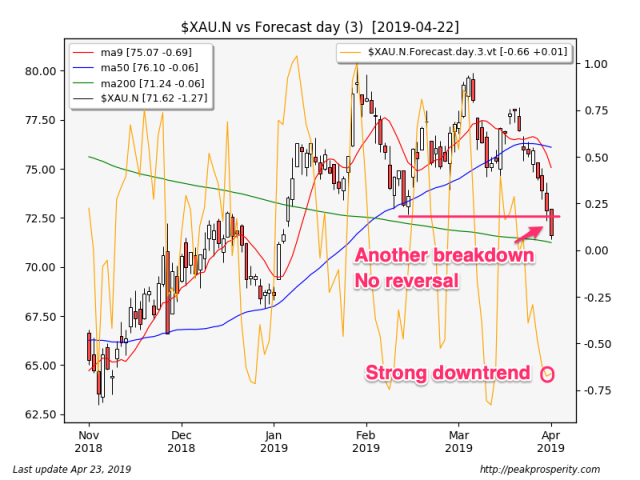 Crude shot up +1.56 [+2.43%] to 65.65, breaking out to new highs. The breakout was caused by the US declaring over the weekend that it would not extend Iran sanction waivers. The confirmed bullish NR7 was definitely bullish, and forecaster jumped higher, and is now in a strong uptrend.. Crude remains in an uptrend in all 3 timeframes. 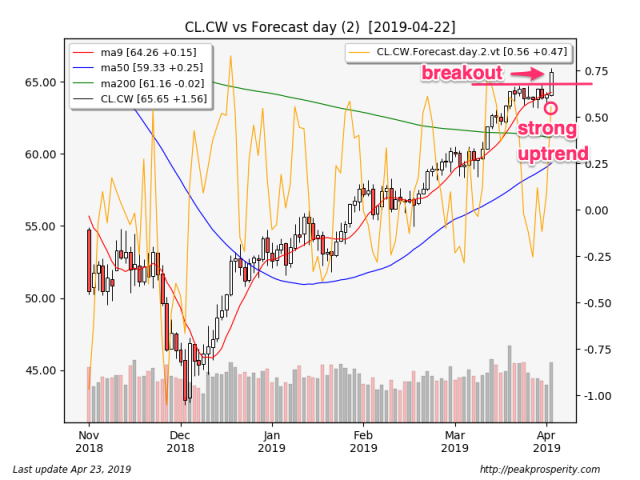 SPX moved up +2.94 [+0.10%] to 2907.97. The long white candle was a bullish continuation, and while forecaster moved lower, it remains (just barely) in an uptrend. Short term, bullish momentum continues to decline. SPX remains in an uptrend in all 3 timeframes.

JNK fell -0.14%; this was a new low for JNK. Forecaster drifted lower, and remains in a mild downtrend.

Today was a bit mixed; the miners looked awful, and in spite of the drop in the buck, gold couldn’t move higher. Perhaps that had to do with a lack of risk-off sentiment as seen in the bond market, where treasury bonds had a somewhat unpleasant day too.

Crude was where the excitement was, jumping to a new multi-month high on the news about the Iran sanctions waivers. I expect if price rises too much further, the Saudis and Russia will start (cautiously) pumping more oil. My gut tells me that Saudi still has some spare capacity, and they don’t want the world to tip over into recession. And speaking of that – I think we have reached “peak positive SPX effects from crude rallies.” Today crude shot higher, and so did energy equities, but that combination didn’t have any positive effect on SPX. Perhaps WTI=65 is the point at which increased oil prices start to be bad news rather than good news for the larger equity market.

No reversal for gold and certainly not for the miners, which are now suffering some moderately severe selling pressure.  You can see this in the GDX:GLD ratio, which is really starting to plunge in a meaningful way. Silver looks somewhat positive, although I’m a bit concerned we could still see one more low before a more sustainable rebound takes place.

Silver could be preparing for yet another brisk drop in the near future. We might have one more of these in our future before the COT report shows silver as ready to reverse.

You were on the money with that call Dave, glad I stayed short. After seeing how it happened, are you still leaning towards reversal soon? Don’t you see silver dropping all the way to support at 13.85? We haven’t had the daily close yet, but I can’t help but feel the stronger than expected support around 15.00 has now truly been broken (especially with gold and miners also doing so badly).

I will have to see how it closes, and what happens with the open interest.

Miners did seem to find buyers today, but the bounce seems to be fading.

One clue: silver and the Euro dropped off a cliff at roughly the same time today.  The Euro is hovering around support.  If the Euro breaks down more substantially – which it could well do – it might just take silver down along with it.