Gold moved higher in a narrow range today, making a new low and then rebounding.  The short white/bullish harami pattern looked strong (45% bullish), and forecaster jumped higher, resulting in a tentative buy signal for gold. Gold remains in a downtrend in both the weekly and monthly timeframes.

Futures are showing a 5% chance of a rate cut in May, a 59% chance of one rate-cut by December and a 19% chance of 2 rate cuts. The assessment of rate-cut-chances continues to decline. 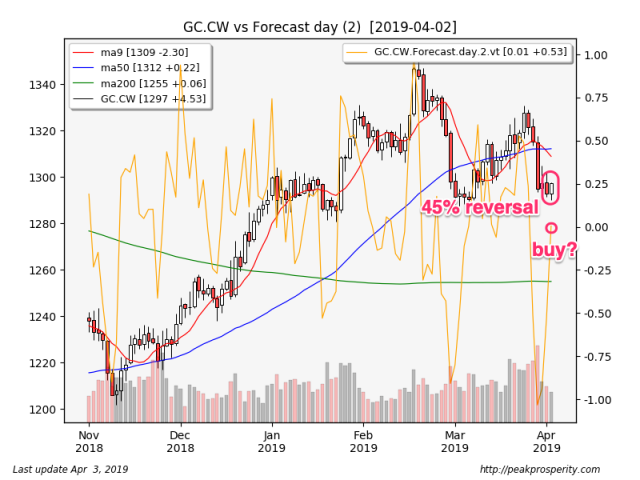 Silver made a new low too, which was substantially more dramatic; the recovery was just enough to erase the loss.   Candle print was a mildly bullish dragonfly doji (26% bullish), and forecaster moved higher, resulting in a buy signal for silver. Silver is now in an uptrend in both the daily and monthly timeframes. To me, heavy volume + dragonfly doji is a bullish signal – traders were buying the dip down at 14.90.  Ideally we get confirmation tomorrow, and we can see how strong the swing low ends up being. 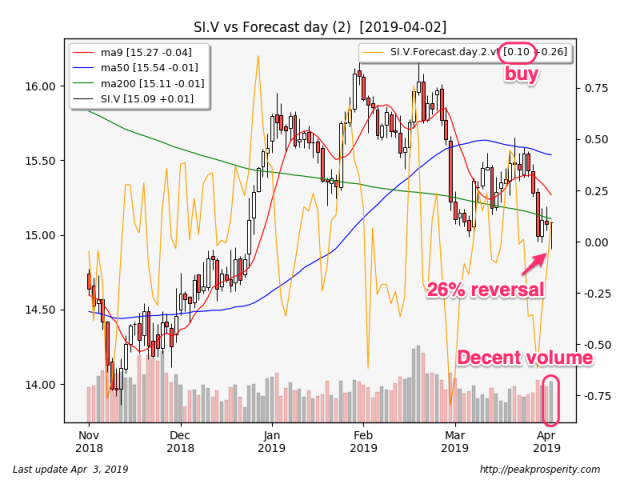 Miners inched higher today in a narrow range. GDX moved up +0.64% on light volume, and GDXJ climbed +0.29% on light volume also. XAU rose +0.25%; the short white/NR7 was unrated, and forecaster remained in a deep downtrend. Unlike gold and silver, there was no hint of a reversal for the miners today. XAU remains in a downtrend in both daily and weekly timeframes. 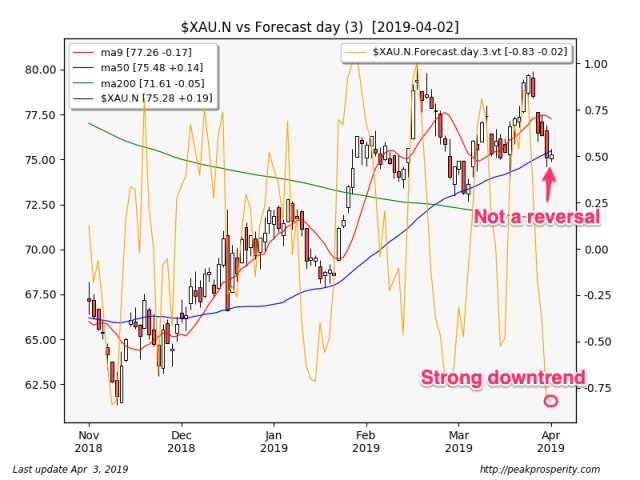 Platinum rose +0.08%, palladium moved up +0.74%, while copper dropped -0.72%. That’s a swing high for copper (48% bearish), and a forecaster sell signal. Both palladium and platinum are still in recovery mode; both look a little iffy to me.

The buck rose +0.12 [+0.12%] to 96.81. The buck made a new high today, but then retreated. The northern doji was a bullish continuation, and forecaster dipped, but not quite enough for a sell signal. The buck remains in an uptrend in all 3 timeframes.  From what I can see, the uptrend in the buck is entirely about the slow, steady move lower in the Euro over the past year.  Stuck at the zero bound (which is sure to fix the EU’s economy…right?) seemingly in perpetuity – who wants to own Euros?

UK PM May reached out to opposition leader Corbyn after the BRExiteers in her own party continue to refuse to vote for her deal. Will Jeremy Corbyn get to dictate the terms of BRExit? Is he just May’s cats-paw to bring her rebellious BRExiteers in line?  Maybe both, who knows.  In an editorial, The Guardian summed up the current situation – there will either be a hard BRExit or article 50 will be revoked in 10 days.

In leaving it so late and in setting these terms, Mrs May is playing with fire. If there is no prospect of agreeing a form of Brexit and if there is no extension forthcoming, the UK will either have to revoke article 50 or depart with no deal a week on Friday.

Regardless, the currency market (GBP/USD) continues to predict a probable soft BRExit, although it is by no means seen as a sure thing.

In view of Chris’s article on Ghawar, here’s a piece at oilprice (https://oilprice.com/Energy/Energy-General/Did-Aramco-Just-Open-Pandoras-Box.html) that references the same information, but with a more mainstream focus. The interesting bits:

SPX inched up +0.05 [+0.00%] to 2867.24. Basically, SPX went nowhere in a narrow range. The northern doji candle was a bullish continuation, and forecaster remained in a strong uptrend. SPX remains in an uptrend in all 3 timeframes.

TLT rose +0.18%, a small bounce after yesterday’s big move down. The bullish harami was unfortunately just a bearish continuation, and the daily forecaster moved lower into a very strong downtrend. TY rose +0.21%, which was also a bullish harami; possibly a reversal (37% bullish), but forecaster barely moved, remaining in a strong downtrend. TY remains in an uptrend in the weekly and monthly timeframes. The 10-year treasury yield fell -1.6 bp to 2.48%.  We’re seeing a sharp correction on the daily, but the longer term uptrend remains intact.

JNK inched up +0.03%, basically going nowhere. JNK remains in a slight downtrend. HYB looks a bit worse – its downtrend is more pronounced, and it lost -0.35% today.

CRB climbed +0.49%, breaking out to a new multi-month high. 4 of 5 sectors rose, led by livestock (+109%). Energy continues to be the best-performing commodity sector by far.

It does look as though the selling pressure in PM has abated after last week’s pounding.  To me, this confirms the thesis that last week’s selling pressure was all about the banksters driving metals prices lower in order to increase their profits on options expiration.  Silver now looks to have buyers on drops below 15, which is a positive sign.

Crude is the real star right now – it has broken out smartly above round number 60 and is showing no signs of stopping.  In the medium term, shale is suffering from a lack of capital – shareholders now want profits (imagine that) rather than just production, and this capital constraint should lead to a drop in production by next year.  Near term, drilling has slowed due to the price drop in December – and these days, overall shale production is very quick to react to price changes, given the severe decline rates.  Without a constant inflow of new wells, shale production would drop by perhaps 40% every year.

Lastly – the worries about a near-term US recession are slowly fading.  I assess this by looking at the chances of a rate cut assigned by the futures markets 8 months from now.  At least for now, traders are becoming slowly less worried as time passes.  This decreases the demand for safe havens – such as USD, US treasury bonds, and gold.

… but in the class of black swans, you might want to add

The nature of a black swan is that it is (or seems) unlikely early on. But this DOES have all the ear marks of the start of a world war.

After taking a quick look at this, ‘investing’ in Treasuries makes no sense.

Trump may have the opportunity to oversee another bankruptcy.