Looks like another new low coming for gold.  Silver is holding up ok for now.  I wonder if gold can get back below $1100?  I’ve been watching the PM space for about 5 years now and have read a ton of articles from a wide variety of people about how the metals behave when this happens or that happens and how they should perform if this or that happens.  And you know what?  There are exactly zero people that have any idea what gold and silver are going to do under any circumstances.  Just look at the clowns over at KWN as a low hanging fruit example (yes, I know that’s a gold humper site).  The people who say gold rises when the dollar sinks are wrong.  The people who say gold rises with the dollar are wrong.  The people who say CB tightening will crush gold are wrong.  The people who say CB loosening will unleash gold are wrong.  Etc….  Oh, they’re right in spurts, but there is no consistency with any of it.  The only thing that is for sure is that the market is heavily manipulated, and it’s anyone’s guess as to when that can/will be overcome.

I guess the last group who have yet to be judged are the ones who say PMs will soar during the next financial crisis.  We’ll have to wait and see on that one.  But many, if not most of those folks have been calling for said crisis for years.  I mean, yeah, eventually, we’ll have another crisis, but that doesn’t mean it will happen in the next 1, 3, 5, or even 10 years.  Governments change the rules.  Nobody accounts for that in their analysis of things to come.  It always ends up like water in the desert turning into sand as you approach.  Then you’re presented with another oasis, just to encourage you to take a few more steps…wait just a little longer.  The collapse is coming.  I’m starting to doubt it will happen anytime soon, becuase we only analyize the data that’s here and the history we have.  Governments, regulators, sovereigns always come up with new schemes and tricks to keep the game going.

Anyway, not very busy this morning, so I had a few minutes to rant.  In the end, gold and silver probably will rise sharply during a real crisis.  But right now, that’s a mirage in the desert, and there are probably a ton of miles to go before the water actually turns up.  In the meantime, I guess we can enjoy owning just about any other asset class.

Gold fell in Asia and London, bottoming right at 9:30 am in the US, then it rallied back regaining most of its losses by end of day. The spinning top candle was mildly bullish (32% reversal), and forecaster jumped sharply higher, but not quite enough for a buy signal. Gold remains in a downtrend in all 3 timeframes.  Currently it looks as though gold has reasonable support below 1290. 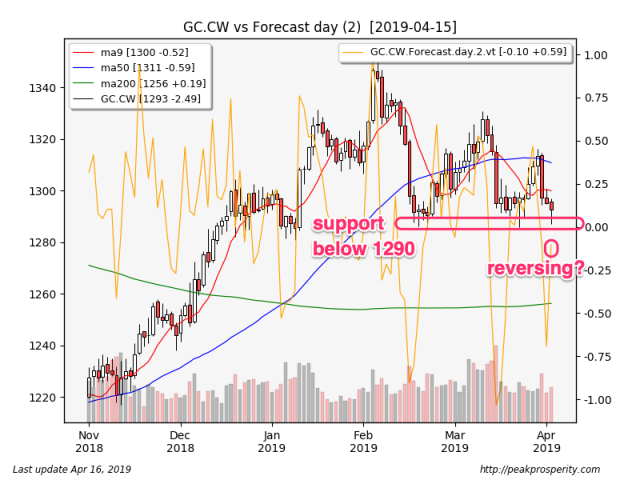 Silver along with gold, making its low at 9:35 am – a new multi-month low – and then rallying sharply for the next 3.5 hours, erasing its losses and managing to move slightly into the green. The high wave candle was a bearish continuation, and forecaster moved higher, but it was not enough for a buy signal. Silver remains in a downtrend in both the daily and weekly timeframes, but weekly forecaster appears to be on the edge of a bullish reversal.

COMEX SI open interest jumped +5,023 contracts, a very large increase. That’s 10 days of global silver production in new paper in just one day. To me this suggests that managed money is going all-in short right now, and the commercials are – probably – madly ringing the cash register with each spike down. I was wondering if the bid for silver below 15 would remain, and so far at least, it has. This week’s COT report should be quite revealing. 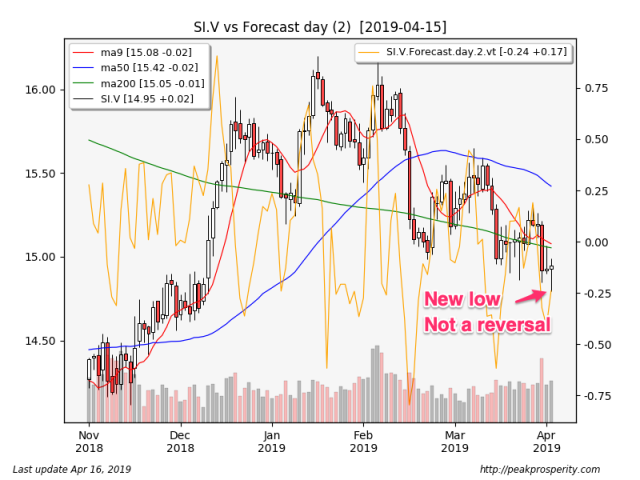 Miners gapped down at the open, and moved higher as dip-buyers appeared, ending up recovering most of the losses by the early afternoon. GDX rose +0.05% on moderately light volume, while GDXJ fell -0.64% on moderate volume. XAU moved up +0.20%, the long white candle was a bearish continuation, and forecaster edged higher, but remains in a downtrend. Miners remain in a downtrend in both the daily and weekly timeframes. 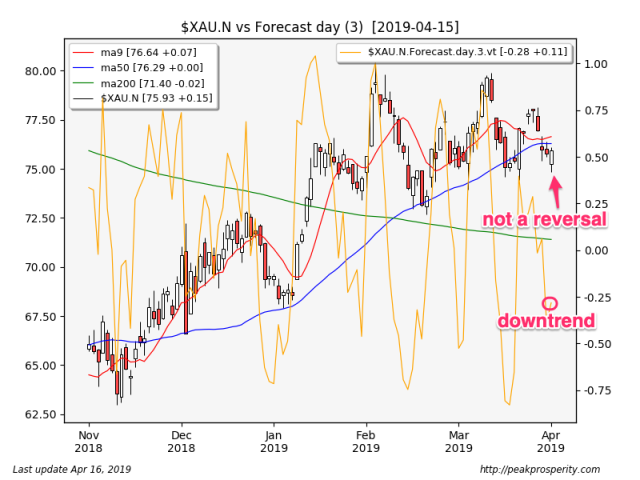 Platinum fell -0.38%, palladium dropped -0.71%, and copper moved down -0.27%. Today, the other metals looked worse than gold and silver – but the intraday moves of both platinum and copper lined up fairly closely with gold and silver.

The buck fell -0.06 [-0.06%] to 96.35. The buck actually sold off today, but managed to bounce back for the most part. The spinning top candle was unrated, while forecaster inched higher, but remains in a downtrend. The buck looks to have support at its 50 MA, and it remains in an uptrend in the weekly and monthly timeframes.

Crude fell -0.18 [-0.28%] to 63.76. Crude fell through about mid-day in the US, but came back in the afternoon, regaining most of the loss. The short black/spinning top candle was a bearish continuation, and forecaster moved more deeply into a downtrend. Crude remains above all 3 moving averages, and is in an uptrend in the weekly and monthly timeframes.

SPX fell -1.83 [-0.06%] to 2905.58. SPX dropped for the first hour, but then rallied slowly back eventually regaining most of its losses. The long black candle was a bullish continuation, and forecaster was unchanged, remaining in a moderate uptrend. SPX remains in an uptrend in all 3 timeframes.

VIX rose +0.31 to 12.32. Who wants puts when SPX is 35 points away from a new all time high? Of course, a failure to make a new high would result in a double-top formation, which would be quite bearish.

TLT rose +0.25%, causing its forecaster to move higher, but it remains in a downtrend. TY moved up +0.08%, but its short white candle was a bearish continuation, and forecaster moved lower into a deep downtrend. Still, TY remains in an uptrend in the weekly and monthly timeframes. The 10-year treasury yield fell -0.7 bp to 2.55%.

JNK fell -0.11%, retreating a bit from its recent high. The short black candle was unrated, and forecaster dipped a bit, but remains in an uptrend. HYB is looking a bit more iffy – it is in a short-term downtrend.

Although silver made a new low today, I’m cautiously optimistic.  Silver outperformed gold, and the massive build in open interest (almost a 2% increase in OI in one day, in what is already an OI overhang of 126% of global annual production – contrast with gold which is at 55%) resulted in a large volume day and a mildly bullish candle rather than the breakdown that managed money was clearly hoping to cause.

If silver can avoid a new low today, and perhaps even rally, we could see a reversal.  Maybe.  It probably would help if the other metals were to rally too.  Notice that silver did the best of the metals group.  That’s a good sign too.

Gold pretty clearly blew through support today.  That’s (of course) a bad sign, unless it somehow manages to rebound by end of day.  The drop through 1280 = bad.

“The recent pattern” (by which I mean what happened during the big risk-off dip back in December) was that gold rallied along with bonds as a secondary safe haven.  Since then, market has been risk on – you see this in junky debt, and equities, and crude, and maybe copper too.  So gold is going to be a bit sucky, and now its getting more sucky.  Nobody cares about safe havens when all is well.  Or, mostly-well.

The miners are fairly strong, all things considered, although they too are finally starting to break down.  But do we remember what the miners did a few years ago when gold dropped 1%?  That was enough to take miners down 5%.  But we aren’t seeing that.  So that’s something new, and positive.  For now at least.

Right now I’m not expecting too much from gold.  Everything is saying “no recession right now”, and the recent correlations suggest that will lead to selling for gold.  And bonds.  FWIW.

If that changes, then the bid probably comes back.  That’s my theory anyway.