Gold fell all day long, bouncing just slightly at end of day. Candle print was a bunch of bearish patterns: bearish engulfing, bear strong line, swing high, which netted a 48% reversal rating. Forecaster dropped, resulting in a sell signal for gold. Gold fell through both the 9 and 50 MA lines today. Gold is now in a downtrend in all 3 timeframes.

COMEX GC open interest fell -7,488 contracts today. It looks as though there was some cash-register-ringing on the decline, which is mildly positive.

Futures are showing a 3% chance of a rate cut in May, a 37% chance of one rate-cut by December and a 10% chance of 2 rate cuts. That’s a small decrease over yesterday. 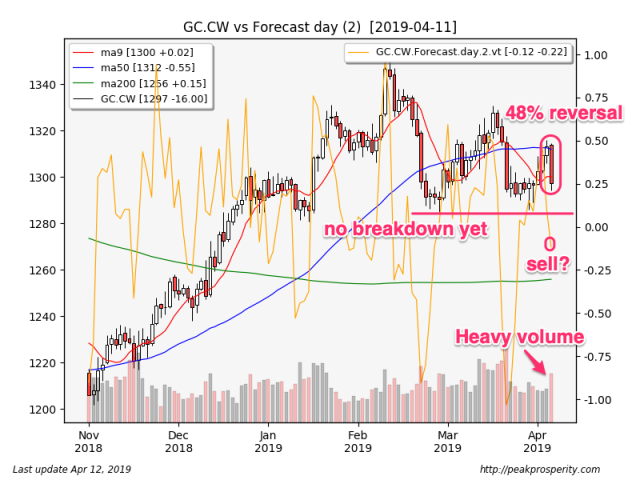 Silver fell for most of the day, making its new low at 1:20 pm, breaking below the previous low set back on April 4. Silver bounced about 10 cents into the close. Silver’s strong line candle was bearish, and forecaster plunged, moving deeper into a downtrend. Silver crashed through both the 9 and 200 MA lines today, and volume was extremely heavy on the decline. Silver remains in a downtrend in both the daily and weekly timeframes.

COMEX SI open interest jumped +8,951 contracts. That’s 18 days of global silver production in new paper. Shorts are really piling in as silver prices plunge, in contrast to what is happening to gold. My guess: in silver, this is managed money loading up short as prices fall, although we won’t see the evidence on the COT report until next week.  Remember: the COT is relatively close to a turning point for silver.  I’m just guessing that the commercials are covering during this process.  At some point, the commercials will have covered completely and the cycle will be complete, but today things definitely looked pretty ugly. 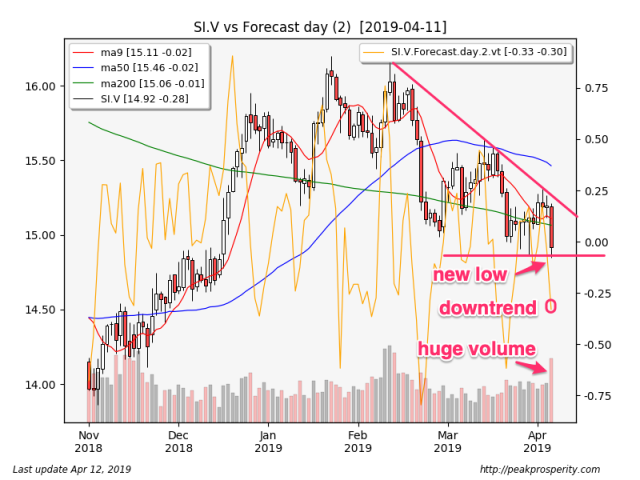 Miners gapped down at the open, tried to rally, plunged, but then came back at end of day. Intraday, miners looked stronger than gold or silver. GDX fell -1.64% on heavy volume, while GDXJ dropped -2.34% on heavy volume also. XAU moved down -1.29% printing a swing high pattern (48% reversal), but forecaster actually inched higher, resulting in a tentative buy signal for the miners. However today’s drop caused a sell signal on the weekly. Miners are in an uptrend in both the daily and monthly timeframes. 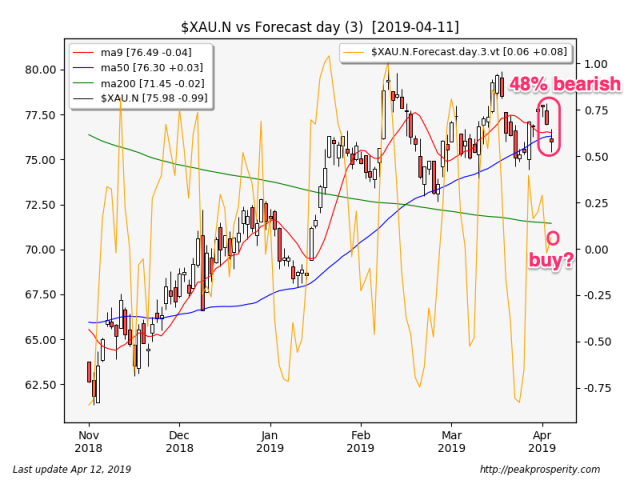 The buck rose +0.25 [+0.26%] to 96.64. The bearish engulfing pattern was actually neutral, while forecaster moved a bit higher but remains in a downtrend. The buck remains in an uptrend in the weekly and monthly timeframes.

Crude fell -0.70 [-1.08%] to 63.82. The swing high looks bearish (50% reversal), and forecaster issued a tentative sell signal. Even so, crude remains above all 3 moving averages, and is in an uptrend in the weekly and monthly timeframes.

There are some hints that OPEC might be thinking about an end to its production cuts. This could be what caused oil to reverse today. Nick Cunningham has the story: https://oilprice.com/Energy/Crude-Oil/Is-This-The-End-Of-The-OPEC-Deal.html

SPX rose +0.11 [+0.00%] to 2888.32. Trading range was narrow, the doji candle was unrated, and forecaster dipped but remained in a shallow uptrend. SPX remains in an uptrend in all 3 timeframes.

JNK rose +0.22%, another reasonably strong move, and another new high. JNK is now clearly above the previous high set back in September 2018. This is a risk on signal.

While gold and silver were both clocked today, gold did a bit better, and the miners actually looked fairly good, given the strong declines in the metals.  Miners did not suffer the wholesale liquidation that we saw during the big downtrends over the past 5 years; traders are buying dips in the miners, at least that’s my sense anyway.

We will see if silver still has a bid under 15.  It is technically at a fairly precarious place – I’m guessing all those new shorts are excited by the prospect of a big breakdown back to the previous low to 13.85.  However the commercials are rapidly closing down their short positions, and they are not usually wrong.  Plus, the gold/silver ratio is at levels we haven’t seen since the 1990s.  Usually, ratios at these levels marked a good buying opportunity for silver.  That said – back in the 90s, it took 3 years for that to play out.

It could take a while this time too.  Its hard to say. 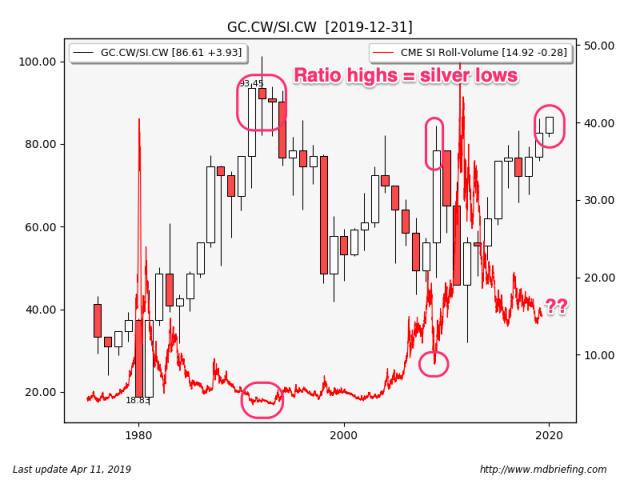