Gold moved slightly lower during London trading (dragged down a bit by a temporarily-plunging Euro), then rallied during US trading hours, making a new high. The long white candle was a bullish continuation, but forecaster tumbled, moving quite close to a sell signal. Gold’s rally today stopped right at the 50 MA. Gold remains in an uptrend in both the daily and monthly timeframes, and is on the cusp of a bullish reversal on the weekly.

Futures are showing a 3% chance of a rate cut in May, a 38% chance of one rate-cut by December and a 12% chance of 2 rate cuts. That’s a small decrease over yesterday. 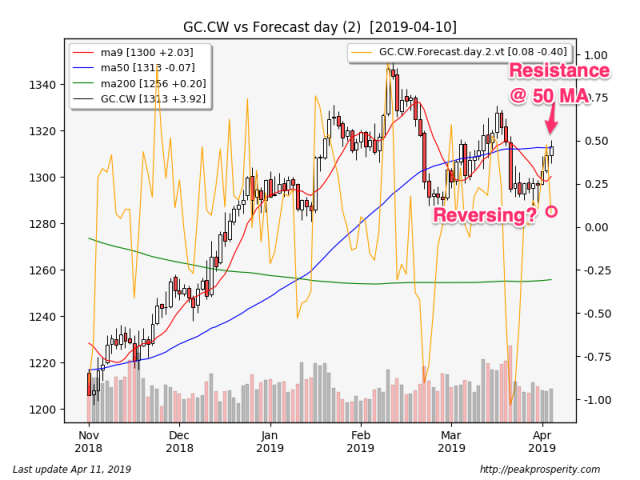 Silver mostly just chopped sideways today. The doji candle was unrated, while forecaster dropped, resulting in a tentative sell signal for silver. Silver is now in a downtrend in both the daily and weekly timeframes. 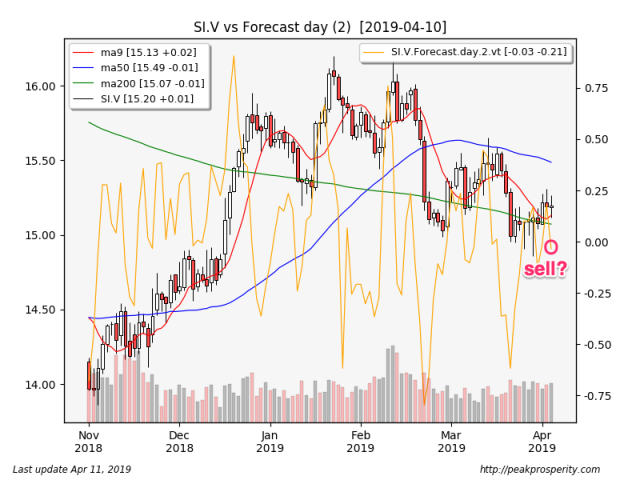 Miners moved sideways today, and then dropped off a minor cliff right at 2pm, as the FOMC minutes were released. GDX fell -0.88% on light volume, while GDXJ dropped -1.32% on moderate volume. (I didn’t see anything exciting to report in the minutes…who knows what the traders saw). XAU fell -1.28%, the closing black marubozu looked bearish (50% reversal), and forecaster fell, resulting in a tentative sell signal for the miners. XAU remains in an uptrend in the weekly and monthly timeframes, but the uptrends are hanging by a thread – further declines in the mining shares will result in reversals in those timeframes too. 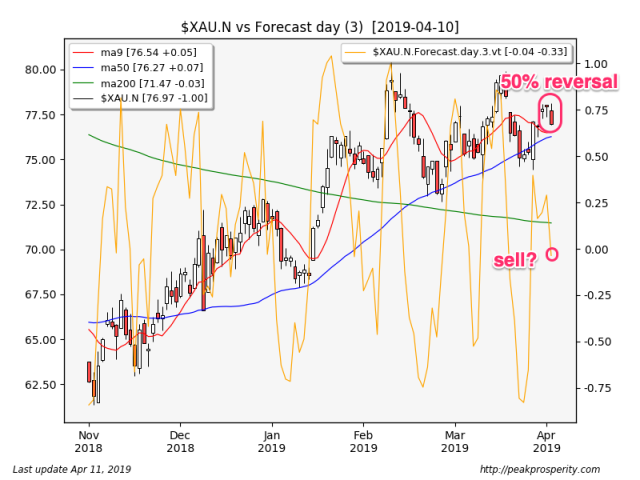 The buck fell -0.06 [-0.06%] to 96.39. The trading range was quite large, but the buck ended the day unchanged. The high wave candle was a bearish continuation, and forecaster moved lower into a strong downtrend. While the buck remains in an uptrend in the weekly and monthly timeframes, the uptrend is fairly precarious – it would not take much to cause a reversal in trend.

The EU has agreed to delay BRExit until October 31st, and May has accepted the delay.

SPX rose +10.01 [+0.35%] to 2888.21. The short white candle was a bearish continuation, but forecaster moved higher, moving SPX back into a moderate uptrend. SPX remains in an uptrend in all 3 timeframes.

TLT climbed +0.24%, resulting in a forecaster buy signal. TY did well also, climbing +0.23%, breaking up and out of its recent trading range, issuing a confirmed bullish spinning top (50% bullish reversal) and forecaster jumped higher and is now in a strong uptrend. TY remains in an uptrend in all 3 timeframes. The 10-year treasury yield fell -2.2 bp to 2.48%. Given the move higher in equities, today was quite a positive day for bonds.

JNK rallied +0.36%, a strong move by junky debt, making a new high. The long white candle was a bullish continuation, and forecaster moved higher into a reasonably strong uptrend. There were rallies in equities, junky debt, and the 10-year.

For whatever reason, the forecasters for the metals and the miners are looking bearish.  I’m not sure what that’s about, since today gold actually managed to rally, and didn’t seem much concerned about the FOMC minutes release.  But the jump in open interest tells us that there is a lot of shorting going on; perhaps that is making the forecasters grumpy.  Silver is being hit worst of all.

Bonds are doing remarkably well, looking as though they are getting ready to rally once more.  Junky debt too is breaking out to new highs.  The JNK rally was a day-long affair, it wasn’t an artifact of the FOMC minutes release.

Hmm.  And looking at the intraday charts as I write this, the metals are getting hit fairly hard just before the US open.  Looks like the forecasters saw something coming.  We will get to see if there is still a bid for silver below 15, because it looks as though that is where we are headed.