Trump came out today and said the US-China trade talks were actually going great, trying to walk back yesterday’s comment that he was thinking perhaps he should wait until after the 2020 elections to do a deal. Additionally, the House passed the Uighur Human Rights Policy Act, which described the CCP’s treatment of the Muslim minority as “gross violations” of human rights, and urged Trump to sanction the CCP officials implementing the policy. As usual, the CCP objected, saying they were just fighting terrorism. As with the HK Act, this bill was passed with a veto-proof majority.

A former US State Department official (whose bid to become an assistant secretary of state failed due to opposition from “China Hawks” in the Senate – and now works for Washington “think tank” NCAFP) went to visit Beijing, and came away with the sense that the the CCP expects things to get worse in the short-to-medium term, and that there might be a “partial decoupling.”

Gold tried to rally in Asia but the rally failed, and gold ended the day slightly lower than when it started. The long black candle was a bullish continuation, and forecaster moved lower but remains in a slight uptrend. Gold remains in an uptrend in both daily and weekly timeframes. Gold/Euros is in a downtrend in both weekly and monthly timeframes.

Futures are now predicting no rate change at all in December. 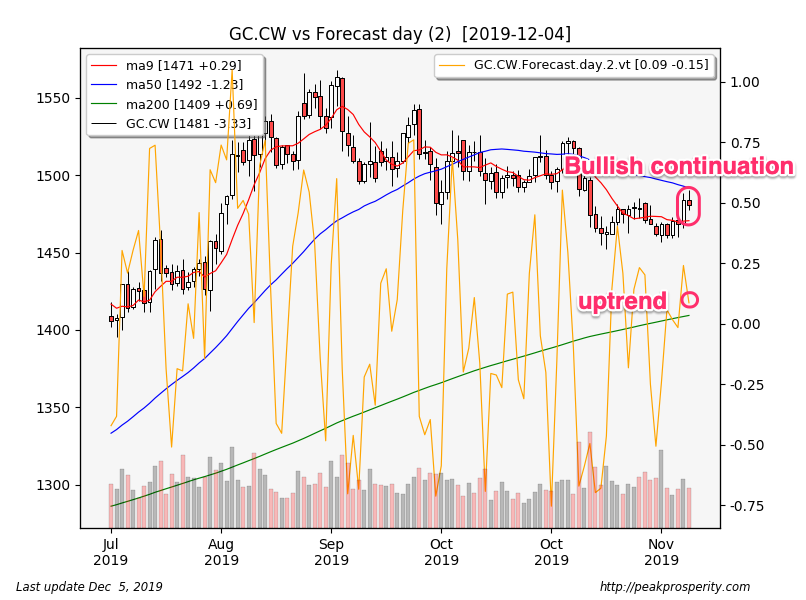 Silver also rallied in Asia, then fell along with gold, but the decline in silver was much larger, and the rebound was nonexistent. The bearish engulfing pattern was neutral, but forecaster dropped sharply, pulling silver back into a downtrend. Silver is now in a downtrend in both daily and monthly timeframes. 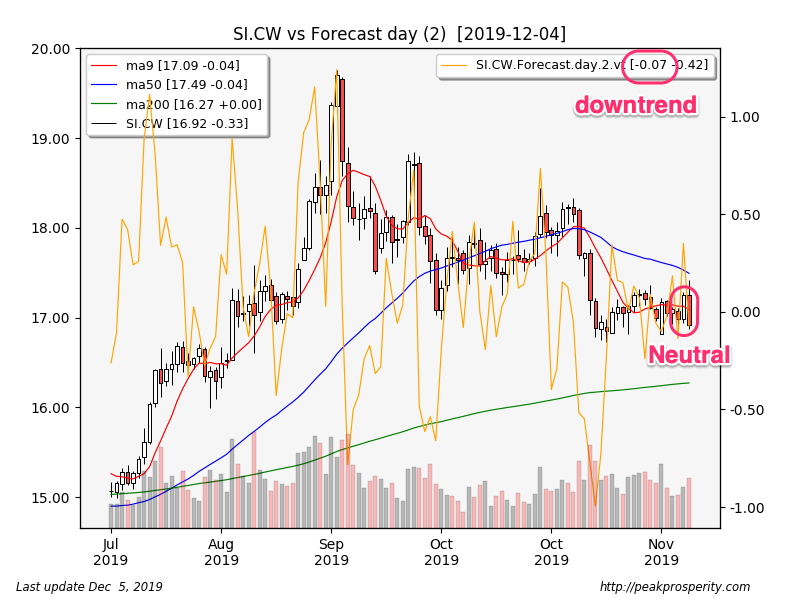 Miners fell at the open, but then rallied back somewhat by end of day. GDX fell -1.04% on moderate volume, while GDXJ dropped -0.78% on moderately heavy volume. XAU moved down -0.47%, the long black candle was neutral, and forecaster was unchanged, and remains in a strong uptrend. XAU remains in an uptrend in all 3 timeframes. Miners continue to look good. 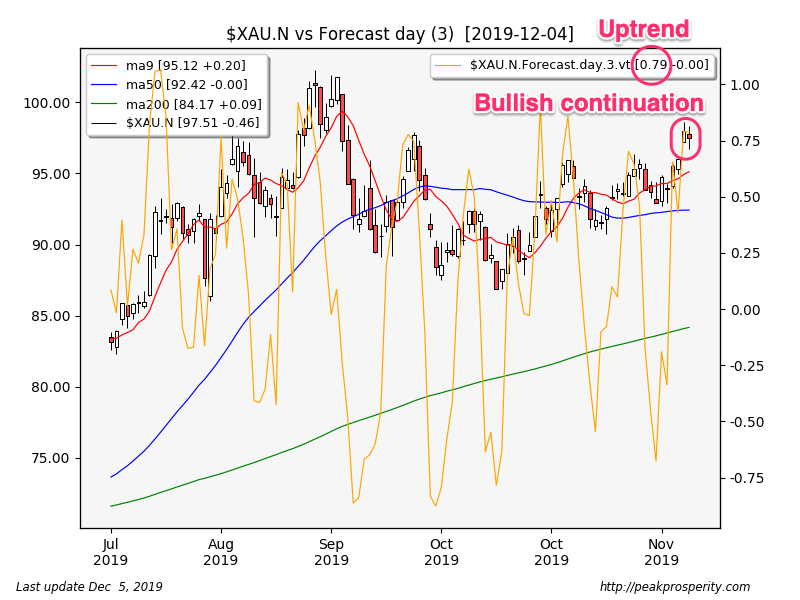 The buck fell -0.08 [-0.08%] to 97.22. The long black candle was actually bullish (52%), but forecaster moved down further into its downtrend. The buck remains in a downtrend in both daily and weekly timeframe.

Crude shot up +1.96 [+3.49%] to 58.20 on heavy volume. The long white candle was a bullish continuation, and forecaster screamed higher, jumping right back into an uptrend. Weekly forecaster also reversed, bringing crude back into an uptrend in all 3 timeframes.  Crude is looking as though it might break out to new highs in the near future.

Today’s EIA report was positive: crude: -4.9m, gasoline: +3.4m, distillates: +3.1m, but the report was not the cause of today’s big rally. The vast bulk of the rally started after Asia closed, ending roughly around the time of the report.  The rally was most likely caused by chatter about the upcoming OPEC+ meeting centering around the prospects for a cut to current production. 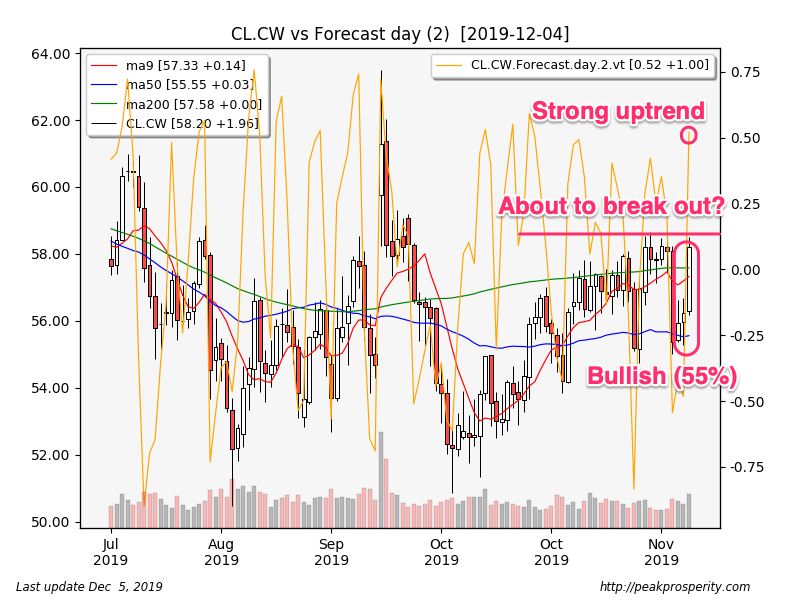 SPX climbed +19.56 [+0.63%] to 3112.76 on moderate volume. The confirmed bullish spinning top was quite bullish (63%), but while forecaster jumped higher, it was not enough to pull SPX back into an uptrend. SPX remains in an uptrend in both weekly and monthly timeframes.

JNK climbed +0.32%, the swing low pattern was extremely bullish (63%), and forecaster jumped back into an uptrend. JNK sure appears to have reversed direction. The BAA.AAA differential fell -4 bp to +87 bp. No worries about credit according to this indicator. Money appears to be rushing back into crappy debt.

CRB climbed +1.02%, with 3 of 5 sectors rising, led by energy (+3.23%). While energy looked quite strong, industrial metals did not rally much at all. They continue to look very weak.

First of all, note how the miners avoided selling off even though “the trade deal is back on.” That’s my tell where things are headed in the PM space.  Gold did reasonably well too – likely that’s because the rain of paper at COMEX didn’t happen today.  Bonds had a bad day, but still didn’t quite unwind yesterday’s big rally.

Trump’s walkback seems to have helped SPX to possibly reverse, and it definitely enabled the junky debt to reverse. Does his walkback represent a real thing, or is it something he was advised to do by his staff?

I’m guessing it’s the latter. Longer term, my vote is for “decoupling.” There are a whole bunch of indicators that say the US and China are moving farther apart. The newfound bravery of Congress (in the face of all that “soft power” – i.e. money – from China) to pass both the Hong Kong and Xinjiang Acts is one such sign; another are the comments from that former State Department official (a “China dove”) who visited Beijing recently and came away with the clear sense – from them – that a “limited decoupling” was likely to happen.

Will a trade deal get done anyway? Beijing wants one very badly. You can tell because they have almost completely ignored the slap-in-the face “outrages” like the two recent Congressional Acts, one of which Trump has already signed.

Mostly the CCP wants an end to the prospect of yet more tariffs. Meanwhile, the EU is thinking about imposing a “carbon border tax” which would raise costs for products from any nation who wasn’t “doing enough” to deal with climate change. Will CCP soft power be able to derail this proposal? They are certainly trying hard to do so, that’s for sure. But when it rains, it pours, and as I said, things seem to heading away from globalization and the well-funded “overlooking” of the CCP’s “spotty” record on human rights appears to be coming to an end.

Trump started in office with the prevailing sentiment being that China was just like us – and becoming more like us every day. Come to find out, three years later, the CCP does things a whole lot differently than we do. South Park did an episode: “Band in China.” It is pretty rough – they pulled no punches. I think that’s where the zeitgeist is headed.

Again, gun to my head, I don’t think a deal happens.

Meanwhile, have you looked at those mining shares recently? 🙂

Nonfarm Payrolls out Friday at 8:30 am.

Meanwhile, have you looked at those mining shares recently? 🙂

Haha, yes, thanks for that, plenty of looking at miners but buying of silver here, so hopefully the tune changes soon, not impressed with yesterday…