The ECB met today: apparently, there is Trouble in River City. To fix things, the ECB will offer cheap loans to banks (yet more TLTRO operations), and push back any hope of a rate hike from summer 2019 to end of year, 2019.  The key phrase for me:

The risks surrounding the euro area growth outlook are still tilted to the downside, on account of the persistence of uncertainties related to geopolitical factors, the threat of protectionism and vulnerabilities in emerging markets.

Translated: we blame Trump (of course), and other things outside our control. The EU escaped recession by 0.3%; “growth” in Q3 was 0.1%, and Q4 was 0.2%. But of course a longer period of negative rates and free money for the banksters will fix everything. Sure-thing, can’t miss.

The Euro dropped off the cliff at 7:45 am, and it didn’t stop dropping until late in the afternoon in New York, losing -1.02%, falling to 111.92, which is a multi-year low dating back to mid-2017.  Ouch.  We might have some more selling ahead of us as holders of Euro give up on getting any yield and buy something…anything else.

Gold chopped sideways today, making a new low by a few pennies, but it more or less ignored the fuss in the currency markets. That’s a very strong reaction by gold; normally it would follow the Euro right off the cliff. The high wave candle was a bearish continuation, but forecaster moved higher, issuing a tentative buy signal for gold. Gold is now in an uptrend in both the daily and monthly timeframes.

COMEX GC open interest jumped +23,329 contracts today. Wow. Someone poured a firehose of paper on gold today, and it had no effect. That was half of a BRExit, or about 10 days of global gold production in new paper. 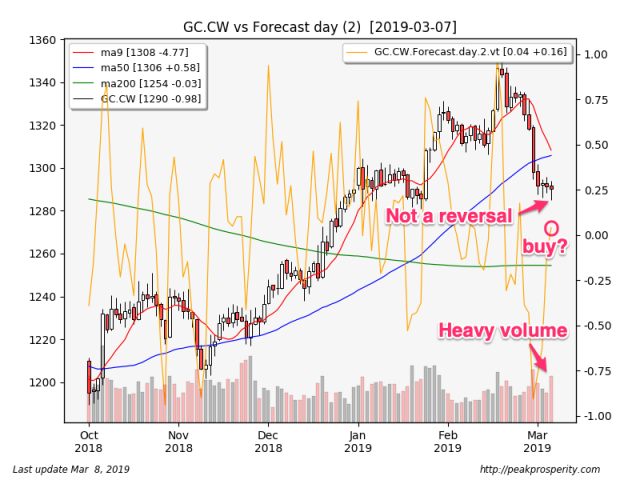 Silver moved sideways into the ECB meeting, then sold off as the Euro plunged. The trading range was narrow though, and the move wasn’t very strong; the short black candle was a bearish continuation, and forecaster fell somewhat, moving a bit deeper into what is just a mild downtrend. Silver remains in a downtrend in all three timeframes. No reversal for silver today. 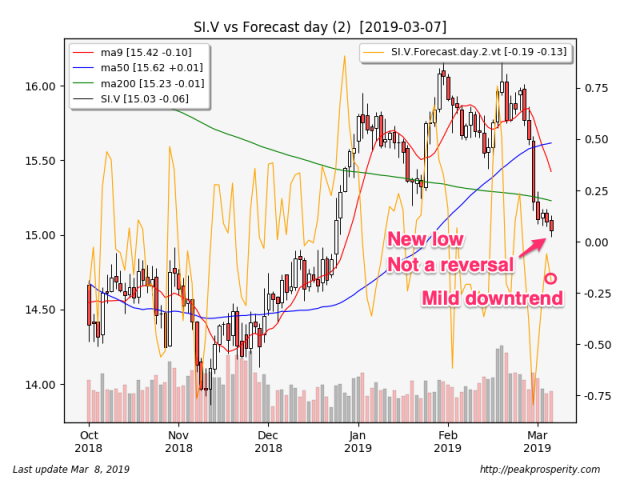 Miners made a new low at the open, then rallied for the first half of the day, losing a bit into the close. GDX rose +1.25% on moderate volume, and GDXJ climbed +1.21% on moderate volume also. XAU climbed +0.66%; the long white candle was a bearish continuation, and the forecaster jumped higher, but wasn’t quite enough for a buy signal for XAU. XAU remains in a downtrend in all 3 timeframes. 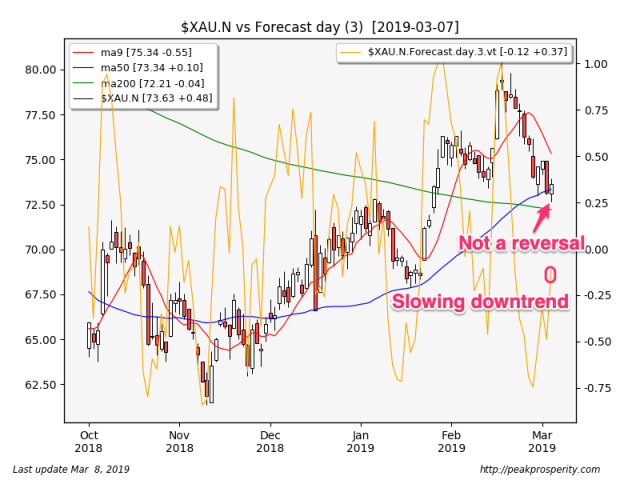 As mentioned, the buck rose +0.81 [+0.84%] to 97.15, which is a new multi-year closing high. The strong line candle is bullish, while forecaster moved higher into what is now a very strong uptrend. The buck remains in an uptrend in all 3 timeframes. 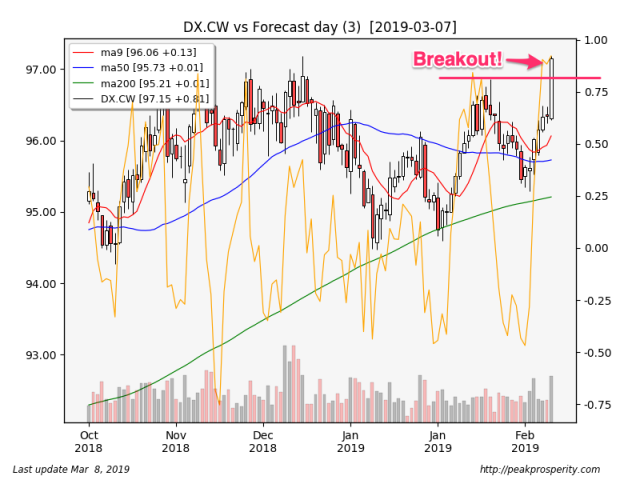 Crude rose +0.19 [+0.345] to 56.86. The short white candle was neutral, while forecaster moved lower, issuing a tentative sell signal for crude. Crude has been chopping sideways for the past several week – in a period of real indecision, zig-zagging across its 9 MA, which now appears to be moving lower. Crude is now in an uptrend in the weekly and monthly timeframes.

SPX fell -22.52 [-0.81%] to 2748.93. SPX jumped after the ECB release, but then plunged soon after. A mid-day rally was sold, with SPX closing relatively near the lows. Today’s move took SPX through its 200 MA. The opening black marubozu was a bearish continuation, and forecaster inched higher, but remained in a mild downtrend. SPX remains in an uptrend in the weekly and monthly timeframes, although the weekly is moving ever closer to a sell signal.

TLT shot up +0.65%, making a new high, pulling forecaster higher into an uptrend. TY did very well also, rallying +0.37%. The opening white marubozu was a bullish continuation, and forecaster remained in a very strong uptrend. TY is in an uptrend in all 3 timeframes. The 10-year treasury yield fell -5.6 bp to +2.64%.

JNK moved down -0.06%, a very tame move considering all of the fuss today. It was a new low, and the spinning top candle was a bearish continuation; forecaster remains in a mild downtrend.

So today gold managed to stay even with the buck up big, and with “someone” dumping a large amount of paper on COMEX. It looks like negative rates as far as the eye can see over there in Europe – as well as almost no growth. And we aren’t even in recession yet.  What on earth will Dragi do if the EU economy actually falls into recession?  Eliminate cash, and charge depositors 2% to keep their money in the bank?  My goodness, gold would simply scream higher if he did that.  It turns out people don’t spend money during recessions even if central bankers charge them money.  They flee for other assets.

Today, SPX wasn’t happy; sector rotation suggests a move into safe haven equities, bonds took off and that 10-year may be finally about to break out. No more suggestion of a rate increase in December.

The miners also did fairly well too.

I believe gold is back.  There isn’t much evidence of that yet, but I think it is coming.  Soon.

What is your reading of the jobs tea leaves?

Great write up as always,

So at first glance this is a horrible payrolls number, blowing out the lower end of expectations on the headline number – expectations were +175k, and we got +20k, which is a huge miss.

But while equities sold off (perhaps 15 points), and gold (and especially silver) rallied, bonds just chopped sideways.  Risk assets didn’t like the number, but it wasn’t the end of the world.

There were some bright spots too.  One positive note was the Average Hourly Earnings  at+0.4% m/m, which is almost a 5% annualized wage gain rate.  AHE is not a useful indicator for predicting recessions, but it is most definitely not a sign of weakness.

Also, my primary recession predictor – “Working Part time/Economic Reasons”  (3 series: All Industries, Slack Work conditions, and Only PTW available) – all plunged this month, and not by a small amount.   That’s strongly positive.  Not only was last month’s scary-looking rally unwound, but the number of people working part time/economic reasons actually declined, making a new low.  It looks a lot like what happened back in 2016 – “the recession that almost was” – and it doesn’t look anything like what we saw in 2008.  Of course, we’ll need March’s numbers to make a complete quarter, but as of right now… 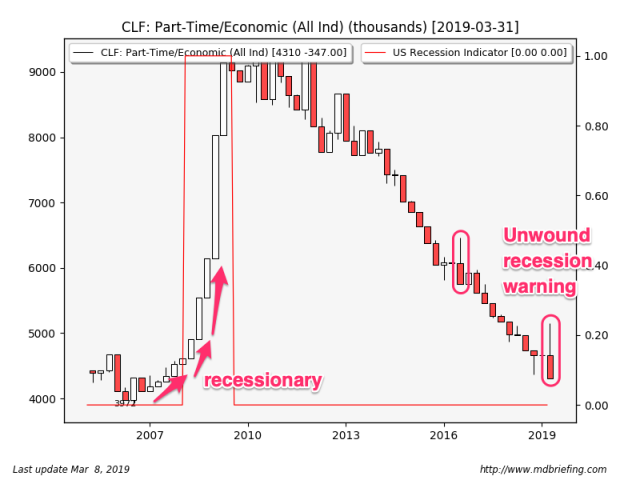 So my conclusion, at least from my “recession warning” perspective, is that this was a positive payrolls report.  It sounds odd considering just how horrible the headline number was, but the overall headline number doesn’t provide as clear of a signal, and the headline number can be pretty choppy month over month.  Here’s what PAYEMS looks like with 3-month candles. 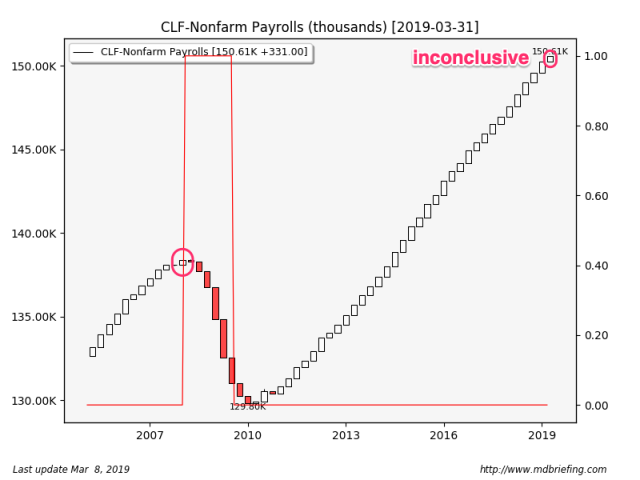