Gold fell -9.40 [-0.70%] to 1326.30 on moderately heavy volume, while silver dropped -0.28 [-1.64%] on heavy volume. The metals and most of the commodity complex were hit relatively hard today; gold actually did fairly well by comparison. The buck was virtually unchanged [-0.02%]; we can’t blame today’s commodity selling spree on currency.

Gold gapped up when Asia opened, but then sold off for the rest of the day.  This resulted in a dark cloud cover, which was not particularly bearish, but GC forecaster plunged -0.41 to -0.08, which is a sell signal for gold. Gold weekly and monthly forecasters are both in a downtrend.  There have been a number of high volume down days in recent weeks – that sort of thing is bearish. 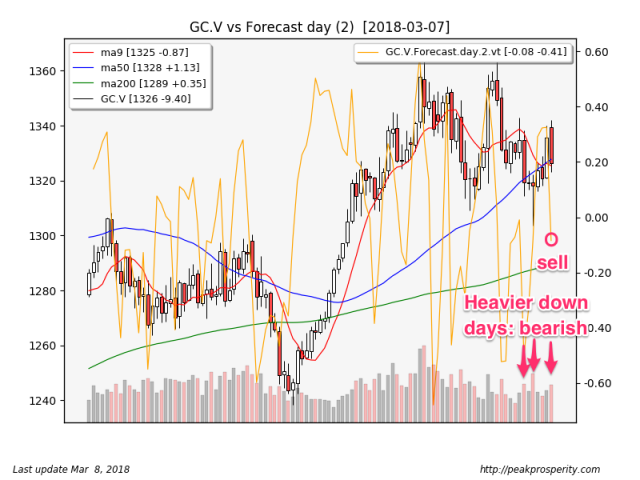 Silver tracked gold, gapping up at the open, and then selling off for the rest of the day. Silver also printed a dark cloud cover – also not bearish – but silver forecaster fell -0.14 to +0.01, which puts it right on the edge of a sell signal. Silver is now back below its 9 MA.  Unlike gold, silver’s volume pattern is not bearish. 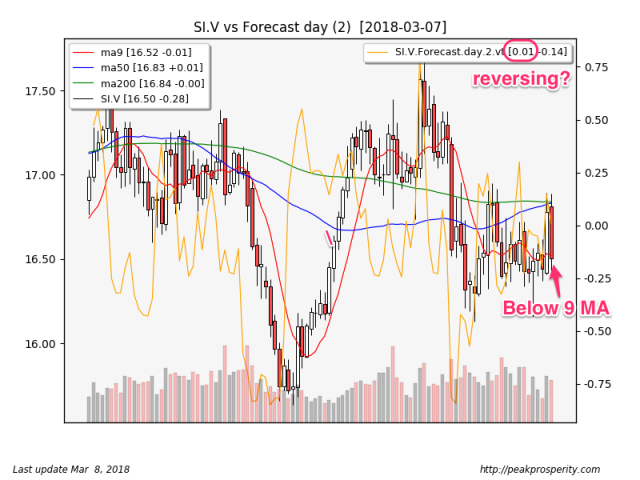 Miners opened lower and then sold off all day long, with GDX down -2.00% on heavy volume, and GDXJ falling -2.25% on heavy volume also. While yesterday’s shooting star candles weren’t conclusive, today’s confirmed shooting stars looked quite bearish: 62% reversal for GDX, and a 59% reversal for GDXJ. XAU forecaster plunged -0.46 to +0.05; that’s not quite a sell signal, but it is close. Today’s drop erased Monday’s rally and then some.  XAU ended the day below the 9 MA, which is bearish. 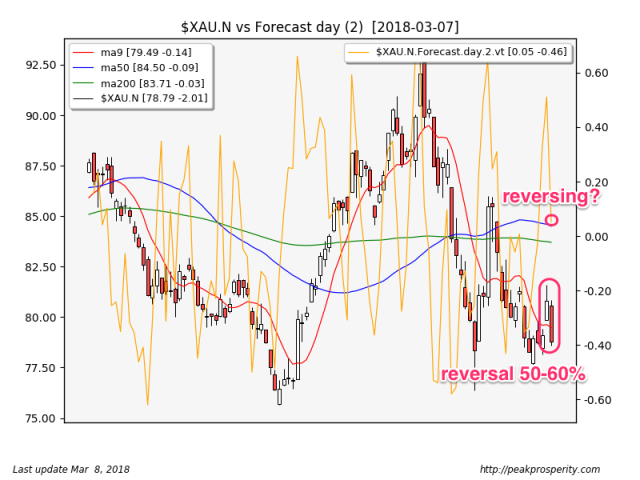 Platinum fell -1.73%, palladium plunged -1.72%, and copper dropped -0.70%. The other metals more than echoed the drop in gold and silver; it felt like they confirmed it.  They also are suggesting that this isn’t just some operation by the big bad bullion banks.  Here’s the platinum chart: a new low, a massive drop in the PL forecaster…much worse-looking that either gold or silver.  Platinum did find support at the 200 MA, but if that fails, it could sell off quite a bit more. 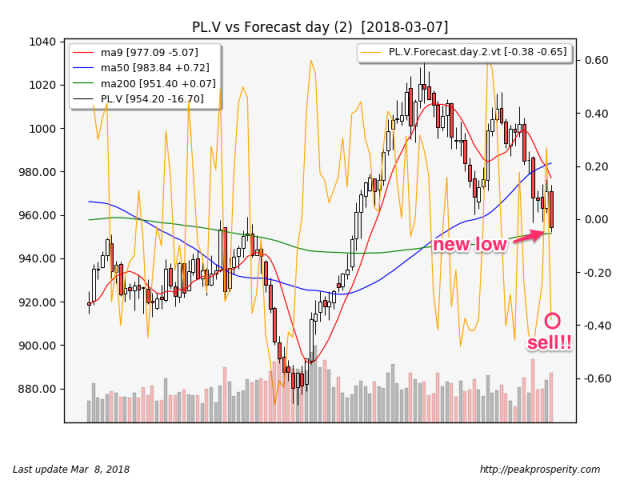 The buck rose +0.02 [+0.02%] to 89.24. It had a relatively narrow trading range. The spinning top candle was neutral,and the DX forecaster moved up +0.07 to -0.09. The downtrend is weakening, but remains in place. Both weekly and monthly timeframes remain in a downtrend.

Crude fell, dropping -1.01 [-1.62%] to 61.30. Crude sold off somewhat right before the EIA report, rallied briefly after the report came out – which looked just slightly bearish [crude +2.4m, gasoline -0.8m, distillates -0.6m], but then ended up selling off hard.  It was almost a $2 trading range today for crude. Candle print was a bearish confirmed shooting star (reversal 50%), and the forecaster agreed, dropping -0.37 to -0.09, which is a sell signal for crude. Volume today was extremely heavy; as with gold, have been a number of recent heavy volume down days for crude, and that’s bearish. Although there does appear to be support at 60, overall it feels as though we go lower from here. 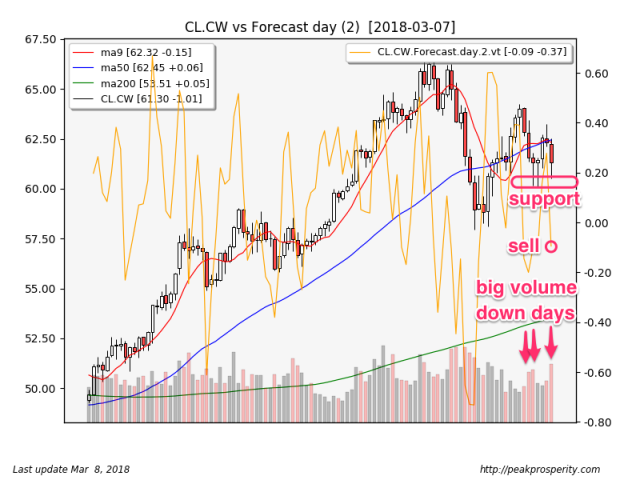 SPX fell -1.32 [-0.05%] to 2726.80. Equities opened the day down about 15 after selling off in the futures markets overnight due to the resignation of Trump advisor (and Goldman alum) Gary Cohn, but rallied back during the day almost back up to even. Is this “the plunge protection team” or just companies executing stock buybacks on weakness?  Tech led (XLK:+0.55%) along with sickcare (XLV:+0.51%) while consumer staples did worst (XLP:-0.90%).  I suspect equities will not do well if crude continues to sell off.

TLT opened up, but sold off for much of the day, ending down -0.11%. TY tried to rally but failed, ending up +0.03%, printing a bearish-looking shooting star candle (36% reversal). TY forecaster fell -0.07 to -0.22. Weekly and monthly TY forecasters are in downtrends.

JNK plunged -0.25%; while the equity market might have rescued by someone, junk debt definitely wasn’t. JNK forecaster dropped -0.22 to -0.20, which is a sell signal for JNK. I wouldn’t be an equity market buyer with falling junk bond prices.

For some reason, the commodity rally just came unglued today, and PM was one of the many casualties.  Was this about tariffs?  Europe?  Something else?  It sure wasn’t about currencies.

At some point PM will be a safe haven, but it just isn’t one right now.  The selling pressure in palladium and platinum definitely has me concerned about where PM goes next.

Looking at that list, I am reminded that cash is a position too.