Gold started moving higher in Asia, and the move accelerated after the dollar started to fall, topping out at 1340 around 11:20 am, retreating somewhat into the close. The opening white marubozu candle was a bullish continuation, and gold forecaster dropped slightly, down -0.02 to +0.30.  This is some good follow-through after last Friday’s ‘s buy signal for gold.  Gold is now back above all 3 moving averages, which is a bullish sign.

COMEX GC open interest rose a big 10,189 contracts today.  Someone is going short, but its hard to say who. 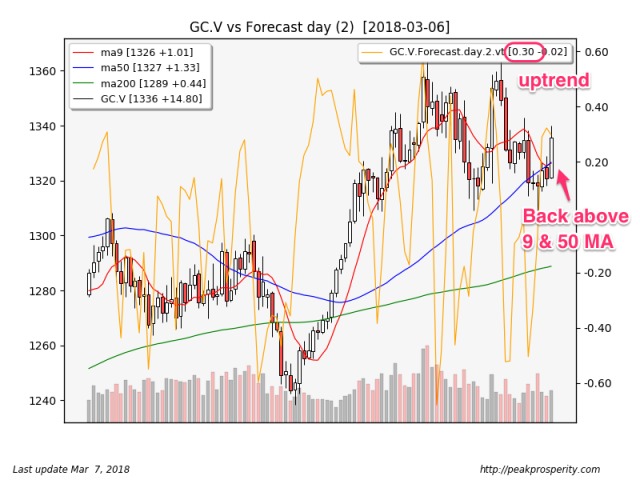 Silver edged higher until just before 5 am, when it started rising rapidly, finally topping out at 11 am at 16.90. The Euro rally didn’t start until about 6:20 am, and the arc of the rally was quite different. That’s why I say currencies weren’t the driving factor for PM today – PM was rallying all on its own, 80 minutes before the big Euro move. Silver’s forecaster jumped +0.34 to +0.15, which is a (belated) buy signal for silver. Silver also printed a 4-candle swing low. While silver managed to blow through its 9 MA, the rally ran into resistance around the 50 & 200 MA lines.  The volume today was quite strong – over the past week, we are now seeing a pattern of high volume up days, and low volume down days, and that’s bullish.

I’ve been beating on the “buy silver/bullish COT report” drum now for several weeks and all silver has done is chop sideways while the commercials get more and more long.  Might this be the turning point? 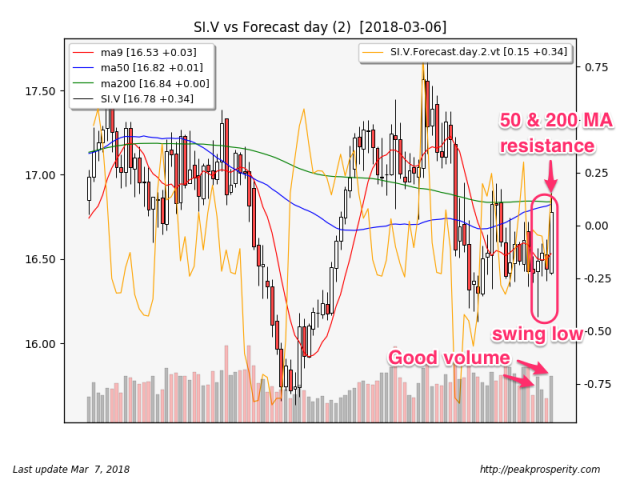 Miners moved higher, with GDX up +1.66% on heavy volume, and GDXJ rose +1.85% on very heavy volume. Most of the gains came at the open; the miners did rally further, but then ran into selling at mid-day and fell into the close. Candle prints for both ETFs were shooting stars, which the code felt were just bullish continuations.  Forecaster for XAU rose +0.17 to +0.49. The move took XAU through the 9 MA, which is a bullish sign. The curiously bullish rally yesterday by the miners may have been the tell.  The price action today wasn’t ideal – miners did have some selling pressure – but the technical indicators aren’t suggesting a top.

Platinum rose +0.82%, palladium climbed +0.19%, and copper moved up +0.93%. That’s a buy signal (and a swing low: 53%) for copper, and a buy signal for platinum as well. Palladium remains in a downtrend. The other metals did not do as well as gold and silver, but definitely supported today’s PM rally.

The buck fell today, losing -0.49 [-0.55%] to 89.22. The Euro was the big mover, up +0.58%. I’m not sure what caused the rally that started at 6:20 am, but it was a rapid spike higher. Was it Kim Jong Un’s apparent willingness to discuss “de-nuking” in exchange for regime guarantees? I don’t have the timeline of news announcements so I am not sure, but that’s what I read. Regardless, the anti-establishment victory in the Italian election so far has had little effect. That said…things there are in a considerable state of flux, and it is unclear who can actually speak for each party. Consider this article from the Guardian, on whether or not the PD was open to joining with M5S in a coalition government:

Under one possible scenario, the M5S, which won 32% of the vote, could join forces with the Democratic party, which won an abysmal 18%. Such a combination would give the PD, which is still, for now, headed by the former prime minister Matteo Renzi, an important seat at the negotiating table and would likely lead to some dampening down of the M5S in government.

But an intense debate about the PD’s next move erupted after Renzi, in a speech on Monday in which he said he would resign, vowed not to link up with any “extremist” parties. Complicating matters, Renzi said he would not officially step down from his position as head of the party until after a new government was formed. Then, on Tuesday, amid reports of strife, he reportedly declared he would not attend an upcoming meeting of all party leaders at the president’s palace and instead intended to go skiing. Renzi then denied the reports he was heading for the slopes.

Crude tried rallying today – up 60 cents at one point – but failed, ending the day down -0.25 [-0.40%] to 62.31. The after-market API report looked somewhat bearish [crude +5.7m, gasoline -4.5m, distillates +1.5m], which took crude down 20 cents right after the report was released. Candle print was a shooting star, but the code felt it was more neutral rather than bearish. Forecaster actually rose +0.10 to +0.26. In spite of crude’s poor performance today (which is especially weak given the falling buck), the forecaster remains positive.

SPX moved up +7.18 [+0.26%] to 2728.12. The market was down as much as 13 points at one point, but managed to rally back after mid-day. Talk of tariffs and resignations moved prices around. Interestingly, the Russell 2000 was up 1%, while DJIA was flat. Armstrong says that DJIA is strongly influenced by foreign buyers while RUT is strictly domestic.  Sector map has materials leading (XLB:+1.10%) while utilities did worst (XLU:-1.34%); the map showed no clear signs of direction.  After market close, Trump’s economic advisor Gary Cohn announced his resignation due to the Trump Tariff kerfuffle. The e-mini (SPX) futures promptly dropped 30 points – a bit more than 1%.

For what its worth, I think Trump has the game theory correct. If your country has a trade deficit with another country, then they will be the loser in a tit-for-tat trade war. As long as Trump can see it through politically, the other side should theoretically blink – eh, I mean, come to a reasonable settlement – where some difference gets split. The complicating factor is that there are a large set of politically powerful players who benefit from the current structure – on both sides – that will lose money as a result, and we are seeing them trying to influence the process via their media proxies.

For instance, take the US sugar tariff. 4500 sugar farmers in the US have managed to keep import quotas for sugar in place for 8 decades, resulting in US consumers paying (according to heritage) 39% more for refined sugar than the rest of the world. https://www.heritage.org/trade/report/us-trade-policy-gouges-american-sugar-consumers. One impact of this 80-year giveaway: in the US, the soda industry switched from sugar to the less desirable high fructose corn syrup back in the 1980s, and so now corn growers like the sugar tariff too. Powerful “winners” work very hard to keep trade policies that benefit them in place.

Same thing with the solar panel tariffs. Trump picks something that matters to the other side and uses it as a signaling mechanism. I really don’t think he’s wrong here; the leverage is on his side, and he knows it.  We can say that “both sides lose in a trade war”, but given the trade imbalance, one side ends up losing a lot more.

JNK rose +0.14%, which caused the JNK forecaster to issue a buy signal, rising +0.43 to +0.02. JNK has seen a lot of whipsaw action back and forth over the past few weeks. Although today also marks a swing low, I don’t have the sense that the buyers are that enthusiastic.

The strong rally today in the metals started more than an hour before the Euro popped higher. Was the tell the miner rally at end of day yesterday? It sure could have been. Most of the metals are back in short-term uptrends, and the Euro appears to have resumed its climb after the weekend of politics.

So is the tariff fight a major market event or a tempest in a teapot? Certainly Brussels would love to take Trump down a peg, and so this might go on for a while – it feels similar to what is happening in the BRExit negotiations, which appears to be primarily a Brussels signaling/disciplinary effort “to encourage all the others.”

Ultimately, I think rates will be the deciding factor over the longer term for risk assets, and in the near term, I think the flood of overseas corporate money funding stock buybacks will provide a bid under equity prices. Probably.

The Italian political situation could still quite easily generate a market-moving event; presumably that would cause money to come flooding back to the US – and back into US assets.

There are a lot of moving parts.

Meanwhile, PM sure seems to have a bid, at least for now.