Gold fell in Asia, making a new low to 1283, before bouncing back somewhat, chopping sideways into the close. The long black candle was a bearish continuation, while forecaster inched higher, but remains in a very strong downtrend. No reversal for gold. Gold remains in a downtrend in all 3 timeframes. 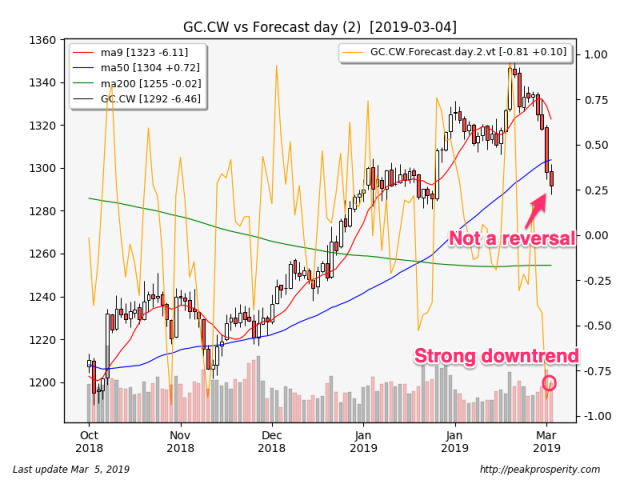 Silver sold off for most of the day, making a new low to 15.08, but its bounce was almost non-existent. The long black candle was a bearish continuation, and forecaster inched higher, but it remains in a very strong downtrend. No reversal for silver either. Silver remains in a downtrend in all three timeframes. 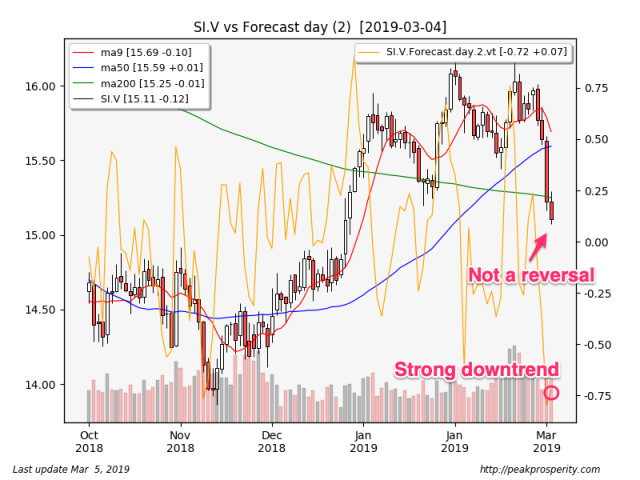 Miners did surprisingly well, gapping down at the open, dipping briefly in the morning but then rallying for the remainder of the day, closing near the highs. GDX was up +0.69% on heavy volume, while GDXJ fell just -0.03% on moderate volume. XAU rallied +0.77%, the closing white marubozu was a 37% reversal, but forecaster just inched up slightly and remains in a very strong downtrend. XAU remains in a downtrend in all 3 timeframes. Even so, the rally off the 50 MA looks quite strong to me, as does the rally occurring on a day when the metals fell. The miners may be signaling we are nearing a low. 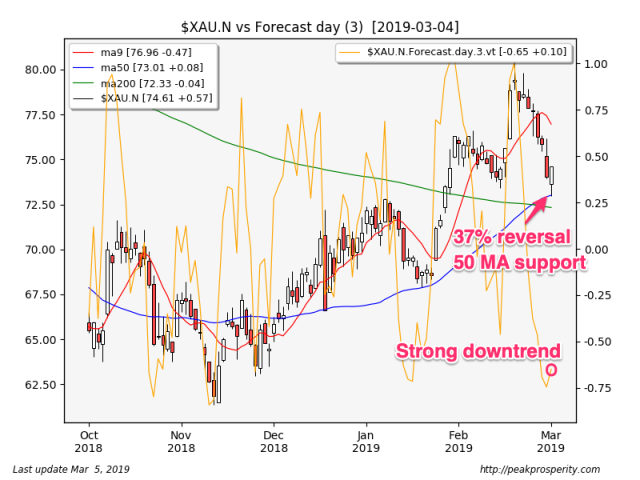 Platinum cratered, dropping -2.77%, while palladium fell -0.85% and copper dropped -0.53%. I’m not sure what caused the massive platinum plunge – but it is definitely in a downtrend now, as is copper and palladium – although palladium remains fairly close to its recent all time highs.  It is possible that the big drop in platinum helped to pull gold and silver lower.

The buck moved up +0.13 [+0.14%] to 96.15. making a new high today. The buck’s long white candle was a bullish continuation, and forecaster jumped higher, putting the buck in a strong uptrend. It is now in an uptrend in all 3 timeframes.

Crude rallied +0.68 [+1.21%] to 56.88. Crude zig-zagged higher today, but the bullish harami was just neutral, and forecaster inched higher but remains in a downtrend. Crude has not reversed yet. Still, crude remains in an uptrend in both the weekly and monthly timeframes, so this remains a correction within a medium-term uptrend.

SPX dropped -10.88 [-0.39%] to 2792.81. SPX moved higher in the futures markets overnight, but then had a somewhat alarming drop after the US market open, plunging almost 50 points in 4 hours. It managed to bounce back by end of day, regaining much of its losses. The long black candle was mildly bullish (37% reversal), but forecaster dipped, moving closer to a sell signal. In spite of the sell-off, SPX remains above all 3 moving averages, and in an uptrend in all 3 timeframes.

Sickcare (XLV:-1.36%) and financials (XLF:-0.64%) did worst, while materials (XLB:+0.45%) and real estate (XLRE:+0.40%) performed best. How materials did so well with a sell-off in the other metals – that I don’t understand. Sector map today looked relatively bearish. We could be looking at an impending correction.

TLT rallied +0.78%, printing a bullish tasuki line/swing low pattern which was a 46% reversal. Forecaster jumped higher, but remains in a downtrend. TY rallied +0.19%, printing a piercing candle pattern which was a 44% reversal. Forecaster moved higher, but remains in a strong downtrend. TY remains in an uptrend in both the weekly and monthly timeframes. The 10-year treasury yield dropped -3.0 bp to 2.72%. The rally in bonds supports the possible correction thesis.

JNK was fell -0.11%, making a new low, with forecaster moving deeper into a downtrend. JNK is still looking fairly strong, however – there’s no sign of panic yet in junky debt, although the drop below the 9 MA is hinting at risk off.

CRB fell -0.22%, with 4 of 5 sectors falling, led by industrial metals (-1.49%). PM looks to be the worst-performing sector, followed closely by agriculture.

So the interesting bit today was that PM sold off, while bonds rallied and equities dipped.  Did gold and silver plunge alongside cratering platinum?  I’d say for the most part, yes.  But the miner rally may be telling us something.  They looked relatively strong today, considering the rest of the metals were all in the red.

Only problem with that story is that the metals showed no signs of a reversal today.  That suggests any PM reversal might be a process rather than some sort of V-bottom.  Of course, that story could change if SPX decides to top out and start moving south more seriously.