Yesterday I opined that the smash in palladium would probably be confined to palladium. Well, according to Bill Fleckenstein, today’s gold smash was – perhaps – because the palladium smash bled over into the rest of the PM complex. Oops. Call me Bernanke.

I suspect that some people may have been unable to sell their palladium, or were unwilling to, and may have hedged by shorting gold. On the other hand (or in addition), perhaps the selloff in palladium precipitated the selling of other precious metals. In any case, it was quite a wipeout.

Gold moved sideways until Japan closed – about 3:45 am – but then it started to fall, and it didn’t stop falling until about 12:30 in the afternoon. Was Fleckenstein right? Gold, palladium, silver, and platinum all plunged in roughly the same pattern intraday. He could be right. The strong line candle was a bearish continuation, and forecaster plunged deeper into downtrend. The plunge also caused the weekly forecaster to issue a sell signal. That puts gold in a downtrend in both the daily and weekly timeframes.

The break through the uptrend line looks quite bearish.  A break below 1285 could leave to a whole lot of selling.  It suggests the buyers are a lot less enthusiastic as they were a few months back.

Futures are showing a 6% chance of a rate cut in May, a 66% chance of one rate-cut by December and a 25% chance of 2 rate cuts. That’s a decent recovery from yesterday’s 75% chance.. 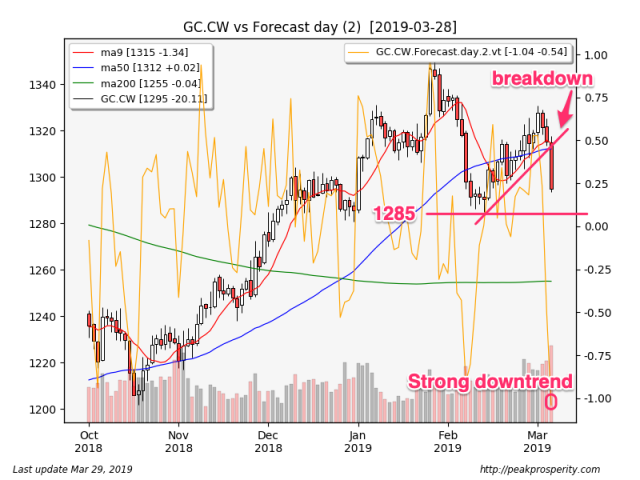 Silver plunged along with gold, finally bottoming out at 12:40 pm, then moving sideways into the close. The long black candle was a bearish continuation, and forecaster fell, moving deeper into a downtrend. Silver dropped below the previous low of 14.98, which opens up the possibility of a much larger decline in silver. If buyers don’t appear soon, perhaps the next stop is around 14. Today’s move caused the weekly forecaster to issue a sell signal, putting silver in a downtrend in all 3 timeframes.

COMEX SI open interest rose +1,406 contracts. Shorts are not bailing out on the decline – they are adding to their positions. That’s bad news. 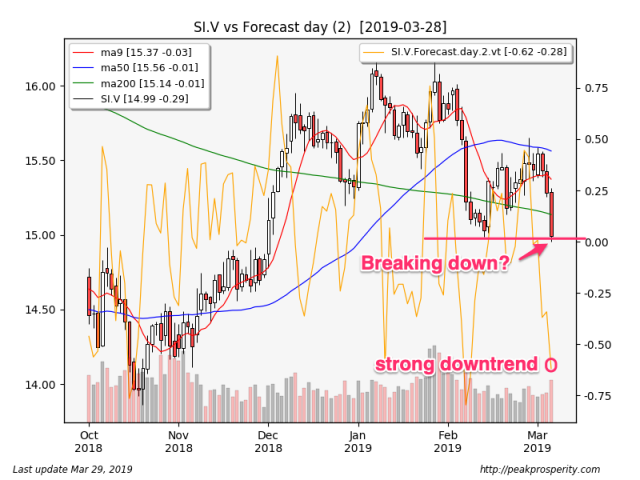 Miners gapped down hard at the open, plunged, bottomed out at around 12:30 along with gold, then moved up somewhat into the close. GDX plunged -2.61% on heavy volume, while GDXJ tanked -3.56% on extremely heavy volume. XAU fell -2.56%, the candle print was a swing high (48% reversal), and forecaster dropped hard, resulting in a sell signal for the miners. The drop also took XAU through the 9 MA, but XAU remains above both the 50 and 200 MA lines, and it remains in an uptrend in both the weekly and monthly timeframes. Miners also have not broken below any previous lows. In spite of the sizable drop today, miners continue to look the best of all PM components. 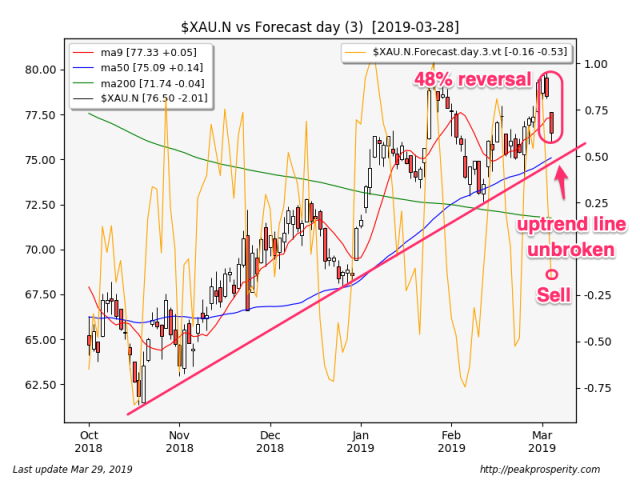 Platinum plunged -1.71%, palladium was creamed [-7.29%] again today, while copper rallied +0.58%. Platinum forecaster issued a sell signal (and had a 48%-bearish swing high), and palladium’s second strong line candle in a row was also bearish, and palladium forecaster moved even deeper into a downtrend. Is the palladium uptrend over? Not yet – according to the monthly. But if it drops much more, it probably will be. That’s almost a $200 move in 2 days.

The buck rose +0.48 [+0.50%] to 96.68. While the buck did move up strongly, it did not appear to be the proximate cause of the drop in the metals today. The long white candle was a bullish continuation, and DX forecaster jumped higher into what is now a reasonably strong uptrend.  The buck is once again moving up towards a breakout.  That outcome most likely requires a hard BRExit, which appears to be becoming more likely as time passes. The buck remains in an uptrend in all 3 timeframes.

Two articles on the latest from the UK:

EU now believes that hard BRExit is the most plausible outcome – according to the EU negotiator Michel Barnier, who was primarily responsible on the EU’s side for May’s Unconditional Surrender document. The EU now must step up its “full-on crisis” preparations. If the EU gets a hard BRExit, you can point the finger at Barnier – a slightly softer deal might have passed Parliament. Sometimes you win the battle, but lose the war. Chief among the conditions the EU wants from the UK – the $51 billion “divorce” bill, which was to be paid by the UK to the EU for the privilege of leaving.

The second article talks about the vote tomorrow in Parliament, which has been nicknamed “blind Brexit” – meaning, a vote on approving Brexit, without the government having to commit to the specifics. The Labor shadow Brexit minister took a dim view of this option, saying that a blind Brexit could well lead to a “Boris Johnson Brexit”. It would essentially be handing May a blank check. Trust for May is in short supply right now.

Crude rose +0.12 [+0.20% to 59.69. Crude fell fairly hard in London trading, but bounced back during US trading, erasing all the losses. The takuri line candle could be a reversal (42%), while forecaster inched lower, resulting in a tentative sell signal for crude. Crude has been more or less chopping sideways for the past week or so; today’s rebound took crude back above the 9 MA by a few cents. Crude is in an uptrend in the weekly and monthly timeframes.

With crude hovering around $60, Trump fired off a tweet at 5:30 am suggesting that the price of oil was getting too high, and that OPEC should increase the flow of oil. The oil correction started about an hour later – Trump’s tweet didn’t seem to be the proximate cause of the drop, and the plunge didn’t last more than 4 hours. This suggests to me that Trump’s post-Khashoggi-murder-influence over Saudi Arabia may be at or near an end.

SPX rose +10.07 [+0.36%] to 2815.44. Today’s NR7 candle was unrated, while forecaster moved higher, resulting in a buy signal for SPX. SPX has been chopping sideways for the past week – quite similarly to what oil has done. SPX remains in an uptrend in both the weekly and monthly timeframes, and the uptrends look fairly strong.  NR7 candles can sometimes precede strong moves in either direction.  Since the prevailing trend right now is higher, that seems like the likely candidate.

Sector map has materials (XLB:+0.97%) and financials (XLF:+0.87%) in the lead, while utilities (XLU:-1.18%) did worst. Utilities may be topping out – today was a bearish (48% reversal) swing high, plus a strong forecaster sell signal for XLU. Perhaps the latest safe haven move is nearing an end?

TLT rallied +0.35%; that’s yet another new high for TLT. Long white candle was a bullish continuation, and forecaster moved higher into an uptrend. TY went the other way, dropping -0.21%, printing a dark cloud cover (36% bearish), and forecaster dropped, but remains in an uptrend. TY remains in an uptrend in all 3 timeframes. The 10-year treasury yield rose +1.5 bp to 2.39%.  Is the 10-year move nearing an end?

JNK moved up +0.20% – a new closing high for junky debt. The JNK chart is actually looking stronger than SPX at this point, since it is making new multi-month highs, while SPX has faded a bit. This supports the thesis that we may not have an SPX correction in our near term future.

So what caused the big gold smash? Was it palladium, as Fleckenstein said, was it First Notice Day weakness? All I know is, the monthly chart is looking quite unhappy. While there is no sell signal yet, the not-yet-completed swing high candle pattern on the monthly looks quite bearish (76% reversal). If buyers don’t show up, and soon, we could see a strong move lower through 1285 in gold, but it would be silver that probably suffers the most. The break through gold’s uptrend line was very emphatic. A drop through 1285 could lead to a whole lot of selling.  Silver’s new low was a bad sign too.

The problem is not about manipulation (that is always waiting in the wings) or about palladium. Its that there aren’t enough interested gold buyers to step up here and buy the dip. Perhaps all those central banks and billionaires who are reputed to be buying gold are happy to see lower prices so they can accumulate.  If you are looking to buy, wouldn’t you be happy with lower prices?  Buying the dips in an uptrend is FOMO.  Not-buying the dips in a downtrend is just prudence.  Buyers are waiting for the trend to change before they start jumping in.  That may be where we are now.

The only positive sign are the mining shares, which remain in an uptrend.

Even though the historian in me finds BRexit utterly fascinating, I’m not really sure it plays into the gold price per se.  BRExit isn’t any sort of existential threat to institutions of any sort, it is more of a manufactured crisis.  Yes there will be winners and losers, but no institutions will go under regardless of how it plays out, so there’s probably no underlying demand for gold “insurance” even in a hard BRExit scenario.  The prospect of a hard BRExit hits the Euro and GBP, pushing the buck higher, and probably helping to push metals prices lower, and we see that playing out right now at least to some degree.

Italy-exit would be quite another matter entirely.  But that’s off the table at this point.  For all of Italy’s difficulties, its citizens do not want to leave the EU.

Junky debt prices tells us the US market doesn’t have any sort of concern about debt defaults, the move into US treasury bonds says there’s no crisis of confidence in government – at least not the US government.  Perhaps the end of the Mueller investigation has been a little bit helpful in that regard.  And SPX seems to be finding it difficult to tip over – crude and SPX seem relatively closely tied.  With Khashoggi off the front burner, Trump can’t tweet down oil prices any longer, and so the oil-SPX rally may still have more room to run.

So perhaps it is just that gold-insurance isn’t needed right now.  Bonds are working well enough.  While the economy is weakening, the US isn’t looking so bad, especially in services, which remain quite strong.  The initial worries in December seem to have abated, at least for now.

Turkey has returned to the news; Erdogan engineered a temporary liquidity crisis making it impossible for foreign banks to short the Lira prior to the upcoming election in Turkey.  This has caused the Turkish 10-year to jump +240 bp this week alone.  That’s a huge move.

By engineering a situation whereby there isn’t enough lira liquidity for investors to move in and out easily, Turkish authorities have averted a currency slide before a March 31 vote that’ll determine who governs Turkey’s cities. That’s good for Erdogan, who’s already contending with a recession, soaring inflation and opposition parties trying to undermine him. But it comes at the cost inflicting huge pain on the investors he needs to sustain the economy that consistently needs to fund current-account deficits.

Is this just a pre-election blip or a sign of things to come?  Its hard to say.  This, on a larger scale, is what I’m looking at as the real gold-positive scenario.  Right now Turkish citizens are piling into dollars and Euros to protect themselves from a Lira decline.  If they start to lose confidence in Euros and Dollars…that leaves only gold.

But we aren’t there yet.  Situation is still relatively normal.  Confidence in governments remains intact.