Gold started selling off during the Japan trading session, and it didn’t really stop dropping until the close in New York. The euro plunged during much of that same time. Candle print was a swing high (58% reversal), and GC forecaster plunged -0.57 to -0.44: a belated sell signal for gold. No more uptrend for you. The selling in gold was steady for most of the day. 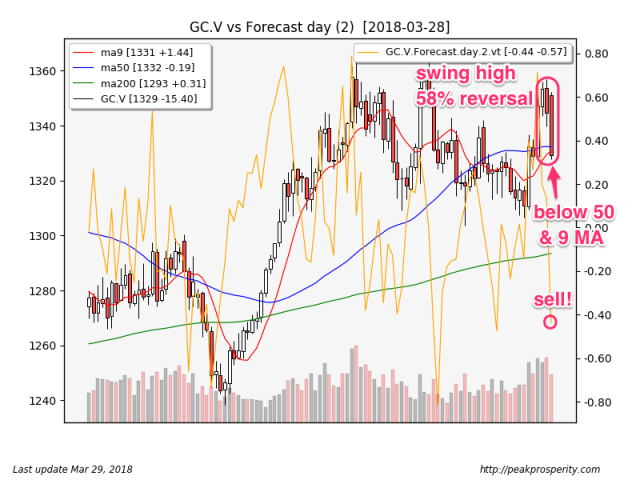 Silver more or less followed the same track, except the selling pressure in silver largely abated around 11 am. Silver printed a swing high candle pattern also (57% reversal) and its forecaster dropped -0.53 to -0.63. Silver is dropping down to the lower end of its recent trading range; a drop through support (roughly 16.10) would probably lead to more selling. If the 16.10 level falls, next support is around 15.50. 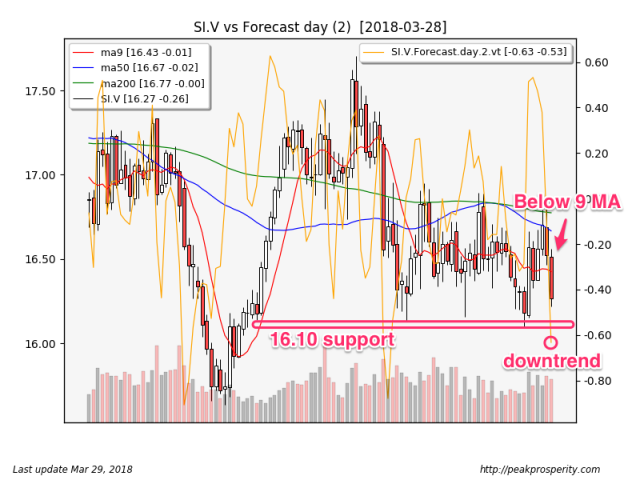 Miners gapped down at the open, and sold off for the first half of the day, chopping sideways into the close. GDX fell -1.50% on heavy volume, while GDXJ dropped -2.25% on heavy volume also. XAU forecaster fell further, down -0.12 to -0.39. Given the large drop in gold, the miners actually managed to avoid disaster. It wasn’t a good day certainly, but “only” a 1-2% drop is relatively mild for the mining shares on a day when gold is off more than 1%. Still, it is clear that if gold continues to plunge, so will the miners. 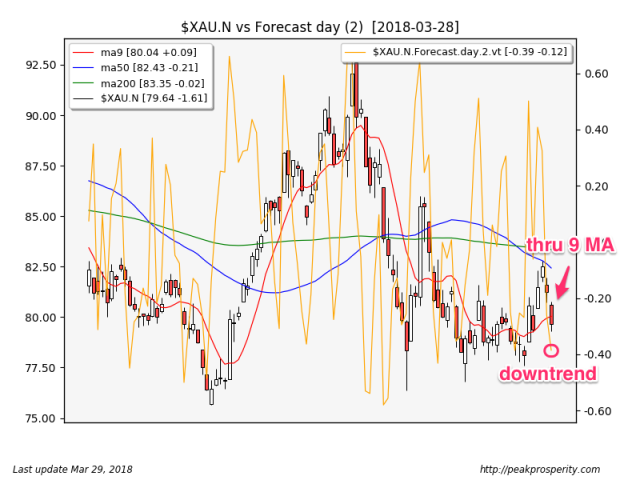 Platinum fell -0.71%, palladium dropped -0.37%, and copped moved up +0.45%. Platinum forecaster issued a sell signal, and made a new low. The other 2 metals are in downtrends, with copper attempting to put in a low down around $3.

The buck rallied +0.74 [+0.83%] to 89.72. Buck printed a swing low (60% bullish reversal), jumping back across its 50 and 9 MA lines today. Forecaster isn’t convinced just yet; it rose +0.34 to -0.24, which is still a downtrend for the buck. The buck remains in its recent trading range. Is this swing low something different? I don’t know. It was a big move today, the biggest in several months. Maybe it is an indication of a trend. The big loser on the day was JPY, which dropped -1.39%; JPY acts as a safe haven currency, and the indications after KJU’s train trip to China are that North Korea is willing to discuss “de-nuking” at the upcoming talks with the US.

So about that train trip. During KJU’s brief visit to China, the Chinese government temporarily banned all references to KJU for the duration of the visit. Was this to preserve secrecy? China did censor search results for “Kim Jong Un” as well as “North Korea” during KJU’s visit, but also included in the ban were references such as: “Fatty Kim the Third”, “Fatty The Third”, and “Fatty Fatty”.  Dodging the restrictions, Chinese internet users decided to use “Fatty on the Train”, among other more benign names such as “visitor from the north-east.” Apparently, the term “Kim Fatty the Third” is so widely used, it sometimes appears as an auto-complete option on the Baidu search engine.

After reading that, I wondered, if they’re that hard on KJU, what must they be saying about Donald Trump? Well – if you believe the New York Times, he’s actually viewed somewhat positively. Trump actually has fan clubs. “Donald the Strong.” Turns out, the Chinese don’t like being lectured on human rights, which Trump doesn’t do, and they see him as a rich, pragmatic, celebrity businessman who says what the thinks, which is a familiar sight in China. Is it possible that Trump has actually improved relations with China? Until I read this article, I assumed the answer was no…but now? You go read it and you tell me.

I bring these two stories together to paint a picture of attitudes; roughly speaking, many people in China admire Trump because he fits into a model they understand and respect who treats them as an equal, while they appear to view KJU as a figure to be mocked – more of an embarrassment, a relic from a bygone era. Does that translate into policy?  It just might.  And if it does, that bodes well for a deal getting done on trade, and on North Korea.

Crude had a wide trading range but ended the day unchanged, at 64.67. The EIA report was somewhat bullish [crude +1.6m, gasoline -3.5m, distillates -2.1m], and immediately after release crude first bounced higher, then lower, then back up to even again. Forecaster fell -0.05 to -0.10, which is a slight downtrend. Still, crude remains above all 3 moving averages. I’m a bit surprised by the outcome today; I expected a stronger sell-off in crude after yesterday’s drop.

TLT moved up +0.26%, making a new high, and printing a spinning top/bullish continuation candle. Forecaster was unchanged at +0.53. TY wasn’t so happy, dropping -0.10%, printing a shooting star which had a 31% chance of being a bearish reversal. TY forecaster agreed, dropping -0.35 to +0.20. That’s still an uptrend, but it appears that today’s failed rally in the 10-year was a bit bearish.

Gold doesn’t like dollar rallies very much, and the buck moved sharply higher today. Gold in Euros fell today too, so that doesn’t help either. The happy news that “Kim Fatty The Third” appears “committed to denuclearization” (http://www.dw.com/en/kim-jong-un-pledges-denuclearization-in-talks-with-chinese-president-xi-jinping/a-43161202) hit the safe haven JPY (!) hard, helped the buck to rally, and probably pulled some of the safe haven bid out from underneath gold all at the same time.

Possibly as a result of all this good news, the PM sector has moved back into a downtrend.