Gold moved slowly lower for much of the day, moving a bit higher into the close.  It was a relatively narrow trading range.  Candle print was a bearish harami – actually neutral – and the forecaster moved down -0.12 to +0.28, which still leaves gold in an uptrend. This could also be viewed as some profit-taking after yesterday’s big rally. Certainly compared with equities, gold did quite well.

COMEX GC open interest rose 13,981 contracts today – 43 tons of paper gold. It was yet another large OI increase today. For reference: 50,000 contracts were added on the day of BRExit. 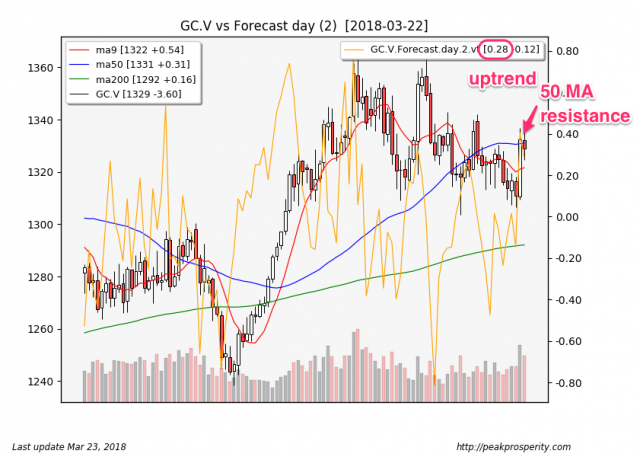 Silver sold off a bit more briskly than gold, following copper lower.  The candle print was the same as gold, however: a bearish harami with a neutral rating. Silver forecaster rose +0.03 to +0.54; silver forecaster isn’t concerned about today’s drop. Silver ended the day back below the 9 MA, which is a negative sign. 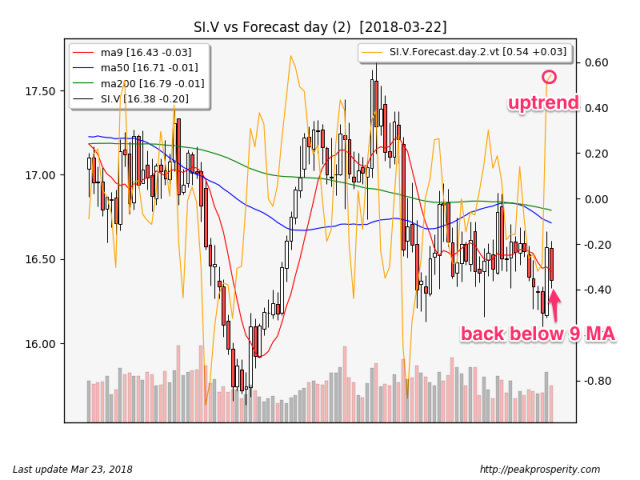 Miners sold off today, with GDX down -1.65% on moderate volume, while GDXJ dropped -1.35% on moderate volume also. There were more bearish harami patterns, but these were more negative: GDX with a 35% reversal chance, and GDXJ with a 44% reversal chance. XAU forecaster echoed the concern, dropping -0.56 to -0.06, which is a sell signal for the miners. Looking at the group: HUI (sell), GDX (uptrend: +0.47), GDXJ (uptrend:+0.16). My guess: the miners were dragged down by falling equity prices.  However, they didn’t drop as badly as most of the other sectors, so there is some hope they will avoid disaster. 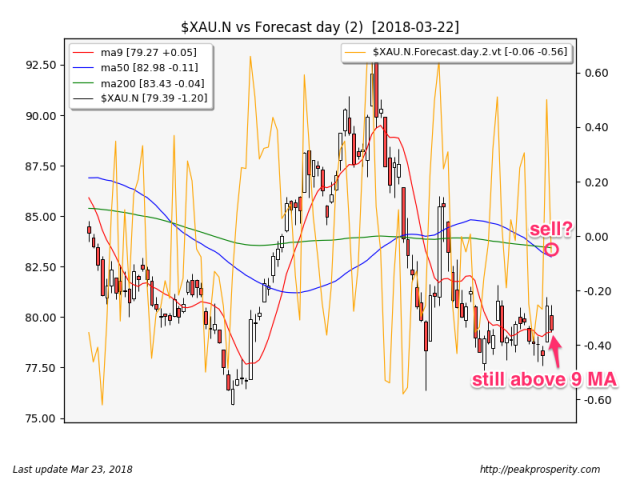 Platinum fell -0.91%, palladium dropped -0.59%, and copper plunged -1.82%. Copper made a new low today, entirely erasing yesterday’s gains and then some. Both palladium and copper are in downtrends.

The buck rose +0.10 [+0.12%] to 89.47. Signals were mixed today; the long white candle might be a bullish reversal (34%) but the forecaster fell -0.23 to -0.07; looking closer, it seems I have a bug in the DX forecaster.  I used a timeseries (DBAA) that updates with a 1-day delay.  That means yesterday’s forecast gets changed when today rolls around – when yesterday’s value for DBAA arrives.  So although yesterday DX emitted a sell signal, it did so again today when yesterday’s forecast value changed … this is probably too complicated to go into.  Just say that I’m swapping the bad indicator out, and the new DX forecaster isn’t finished just yet.

Crude fell -1.28 [-1.95%] to 64.21. Trump Tariffs were held responsible for the drop in crude prices – probably markets are guessing that a trade war will dampen economic activity around the world, which will reduce demand for oil. Candle print: dark cloud cover (37% bearish reversal), and forecaster fell -0.28 to +0.40. That’s still an uptrend; the selling in crude stopped right at yesterday’s breakout point, which is a positive sign.  Crude may not be done with its rally just yet.

SPX plunged -68.24 [-2.52%], gapping down at the open, and then falling substantially more after the details of the Trump Tariffs were released. The closing black marubozu was a bearish continuation, and SPX forecaster fell -0.31 to -0.93, which is a strong downtrend. SPX closed at the lows of the day.  Sector map shows that financials led the market down (XLF:-3.69%) along with industrials (XLI:-3.30%) while utilities did best (XLU:+0.44%). This is a classic bearish pattern. Most sectors were down at least 2% on the day.  There appears to be support at the 200 MA – which is another 2.5% drop away. 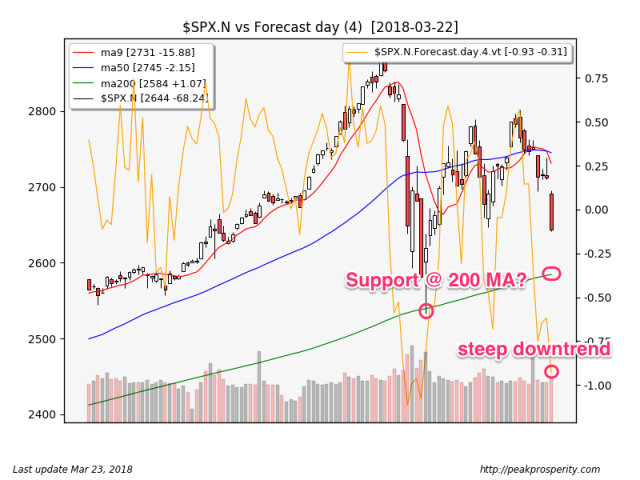 TLT rose sharply today, up a big +0.99%. The plunging equity market caused a flight to safety which has finally resulted in bonds getting a strong bid. There’s probably some short-covering going on too.  TY agreed, rising +0.35% and printing a swing low – 70% bullish reversal. Forecaster rose +0.21 to +0.28, which is a stronger-looking uptrend. The 10-year ended the day at 2.80%.

CRB fell -0.40%, dropping back to rest on the 50 MA. 3 of 5 sectors dropped, led by industrial metals (-1.14%). Since commodity pits close at 2:30 pm, and much of the price action came after the tariff announcement, CRB’s move today doesn’t show the true extent of the hit.

The prospect of tariffs leading to a trade war is causing consternation; a 2.5% drop in equities is a large move. This conjures up a vision of the Great Depression and Smoot-Hawley; of course, back then we had a large trade surplus, so the tit-for-tat trade war devastated our exports. Now we’re an importer, so the impact will be different. Mostly – rich people will be taking a proportionally larger hit, because they end up consuming more. And, most importantly, Trump is almost certainly looking to make a deal – that’s what he does.  How long that takes, and how much damage happens in the meantime including (maybe) slowing down the world economy, is an open question.

In addition to the tariff announcement, the White House announced that John Bolton was going to take over as National Security Advisor. If Trump actually listens to him, this could result in a great deal of new military action – in Iran, Syria, and North Korea – which the nation and the world can ill afford right now. However, if we think about Trump-the-dealmaker, how might the Bolton appointment help? There is a chance that this might just be Trump bringing a “bad cop” into the administration, right before the negotiations with the North Koreans. “Who is the baddest bad cop I can bring to my upcoming meet with KJU?”  [Turns on Fox.  Sees Bolton.  Points Finger.]  “Him!  That’s the guy!  Tell McMaster he’s out.”

It is almost like I have a video feed from the West Wing.

The risk, of course, is that he actually listens to Bolton and we get into a bunch of costly and never-ending new wars.  Of course if Bolton becomes too annoying, Trump will show him the door too.  Bolton should probably keep his briefings short.  And avoid using words like “moron.”

I think it is more likely than not that Trump is looking to set the stage for a deal with North Korea, Iran, and the China trade deficit in time for the midterms.  On the way to this party, however, I expect we’ll see increased volatility in risk assets.  And hopefully he doesn’t actually listen to Bolton.

At least gold looks as though it is finally getting a bit of a safe haven move now.