Gold fell in Asia, rallied in London, and then fell once the US opened, ending the day back where it started. The short black/spinning top candle was neutral, while forecaster moved higher, issuing a buy signal for gold. Gold weekly also issued a buy signal too, which puts gold in an uptrend in all 3 timeframes.  That seems positive, but it also seems a bit tentative to me too.

COMEX GC open interest plunged -10,316 contracts today. This was a reasonably large change, and I think, a positive sign. 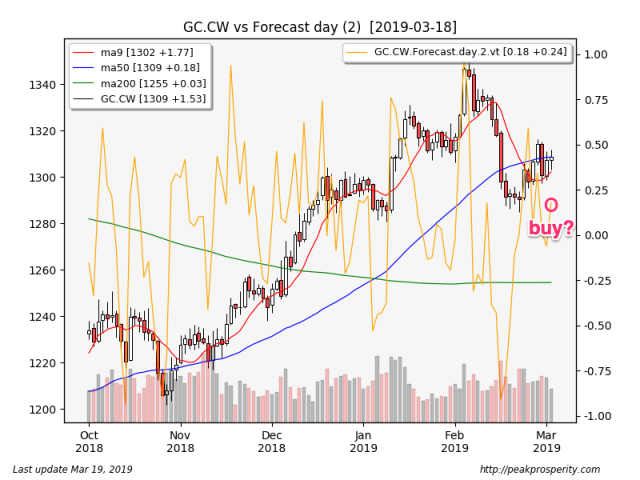 Silver fell a bit less in Asia, and rallied a bit more strongly in Europe. The long white candle was unrated, and the forecaster moved higher, but not quite enough for a buy signal. Today’s move was enough for a buy signal on the weekly.  That puts silver in a downtrend in both the daily and monthly timeframes. 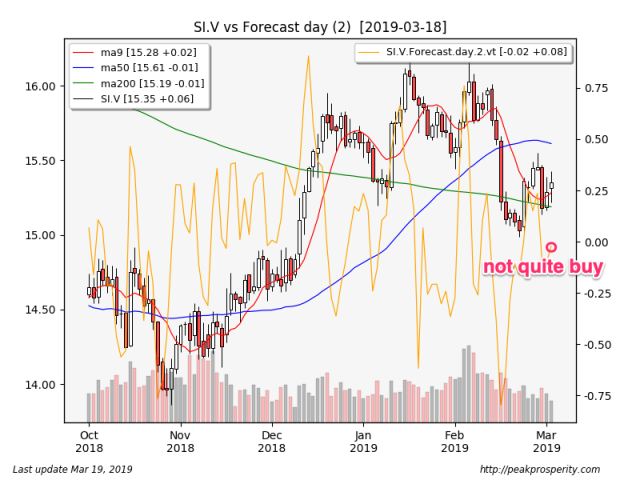 Miners sold off for most of the day, ending at the lows. GDX dropped -1.12% on moderately light volume, and GDXJ fell -1.02% on moderately light volume also. XAU dropped -1.22%; the bearish engulfing candle print was actually just neutral, the move took XAU through its 9 MA, and also caused the forecaster to plunge resulting in a daily sell signal. XAU is in a downtrend in the daily and weekly timeframes. The miners looked quite weak today. 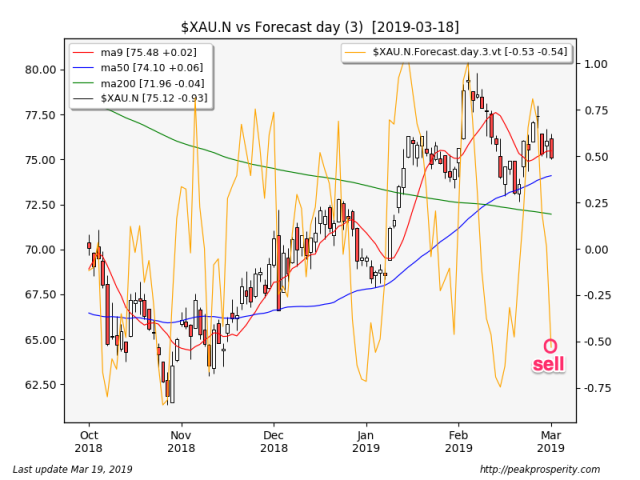 The buck fell -0.08 [-0.08%] to 95.95. The southern doji/NR7 candle was mildly bullish (30% reversal), but forecaster dropped deeper into downtrend. Not much happened today in the buck. The buck remains in a downtrend in both the daily and weekly timeframes.

Major currency moves: GBP [-0.35%]. The speaker of the Commons , John Bercow, said that he would not allow a third vote on the twice-rejected Unconditional Surrender measure if the motion remains substantially the same.  This was a moderately big deal – Reuters called it a “constitutional crisis.”  In spite of the flurry of non-binding votes – which now just appear to be attempts by May to sell Unconditional Surrender to the BRexiteers – the UK is set to execute a hard BRExit on 29 March.

“This is my conclusion: if the government wishes to bring forward a new proposition that is neither the same, nor substantially the same, as that disposed of by the House on the 12th of March, this would be entirely in order,” Bercow said.

Crude rose +0.55 [+0.93%] to 59.44, which is yet another new high for crude. The plunge back in December was rapid and dramatic, and the rebound has been slow but relatively steady. The long white candle was a bullish continuation, and forecaster fell, but remains in an uptrend. Crude remains in an uptrend in all 3 timeframes.

SPX moved up +10.46 [+0.37%] to 2832.94. This is a new high for SPX – SPX is now clearly above the previous highs set back just before the December plunge – which is a bullish sign. SPX and crude are fairly strongly correlated right now – and have been since late December. It might be hard for SPX to correct if crude continues to rise. The short white candle was a bullish continuation, and forecaster fell, but remains in an uptrend. SPX remains in an uptrend in all 3 timeframes.

JNK fell -0.06%; forecaster fell but remains in an uptrend. Unlike SPX, which has broken out more convincingly to new highs, JNK is chopping sideways. Junky debt isn’t supporting the continued risk on sentiment very strongly.

There really wasn’t much activity today.  Things feel on hold until the UK sorts out its BRExit situation.  I’m reading articles now that companies would actually prefer a hard BRExit over an interiminable, ill-defined “extension” period.  I wonder if their preference will percolate through to their servants in government.

We have a Fed meeting coming up this week; supposedly there will be a “dot plot” update.  And we can spend our time counting the number of times that the Fed uses “patient” and attempt to read the tea leaves on how dovish they’ve become – or maybe they’re back to being hawkish after the latest market rebound.

Forgive me if the prospect doesn’t sound all that exciting.