The Euro fell relatively hard today, starting in Asia and only ending its plunge at the end of day in New York. Gold followed, resulting in a confirmed bearish NR7 (55% reversal), which the forecaster confirmed by plunging -0.37 to -0.26, which is a sell signal for gold. Gold appears to be forming a bearish-looking descending triangle pattern…if the buck continues to rally, gold will almost certainly break down below 1310 support.  Gold is now in a downtrend in all 3 timeframes. 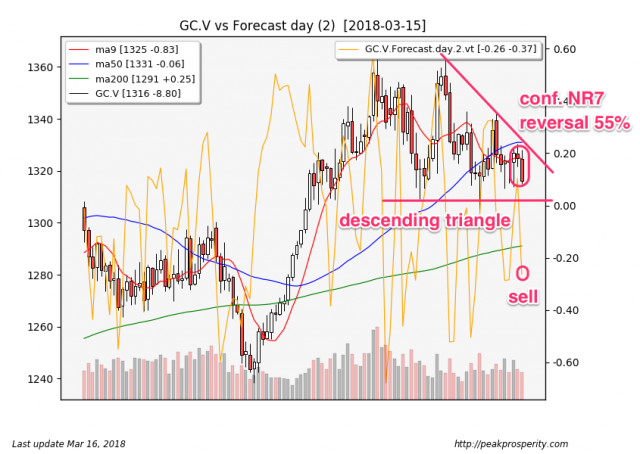 Silver tracked gold, dropping after Asia closed, ending the day in New York right at the lows. Candle print was a long black/bearish continuation, but silver’s forecaster rose +0.01 to -0.06, which is a very mild downtrend. Even though silver is also in a descending triangle and looks ready to break down, the forecaster isn’t predicting such an outcome. I’m not sure why.

COMEX SI open interest rose 5,435 contracts today – a big move, which is an additional 845 tons of paper silver.  Like gold, the silver open interest has been rising strongly all week long.  Someone is loading up short, it would seem. 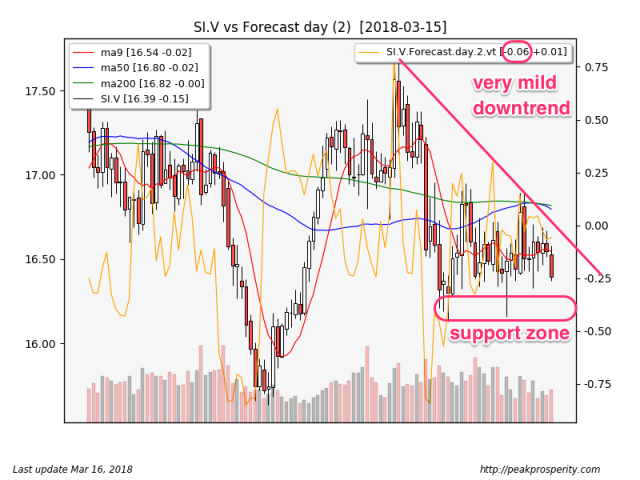 Miners fell but not all that badly, with GDX down -1.29% on moderately light volume, and GDXJ dropped -0.97% on moderate volume. In spite of the modest drop, XAU forecaster plunged -0.44 to -0.53, which is a strong downtrend. That’s a bad sign – the XAU forecaster lines up a lot more with gold than it does with silver.  It appears as though we may retest support at the base of the descending triangle. 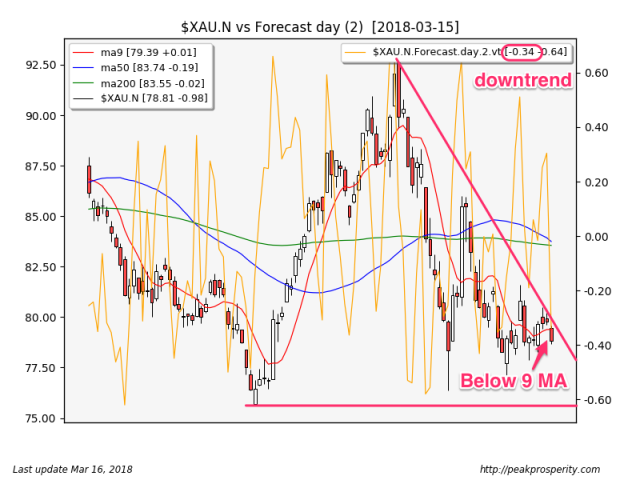 Platinum fell -0.77%, palladium dropped -0.24%, while copper lost -0.73%. Copper confirmed yesterday’s shooting star, which has a 57% chance of being a bearish reversal. Platinum looks similar, following on from yesterday’s sell signal.

The buck rose +0.45 [+0.50%] to 89.70. The rally started in Asia, and didn’t stop until the close in New York. Candle print was a confirmed bullish NR7, which has a 57% chance of being a bullish reversal. Forecaster jumped +0.39 to +0.08, which is a buy signal for the buck. Is this just another whipsaw, or the real thing? The buck has been chopping sideways for the past 6 weeks. It is in a downtrend in weekly and monthly timeframes, but a close above the 50 would be a bullish sign, and that’s not far away.   After that, it needs a close above 90.29 to confirm the double bottom from four weeks ago.  Looking at this chart, it feels as though this could still go either way. 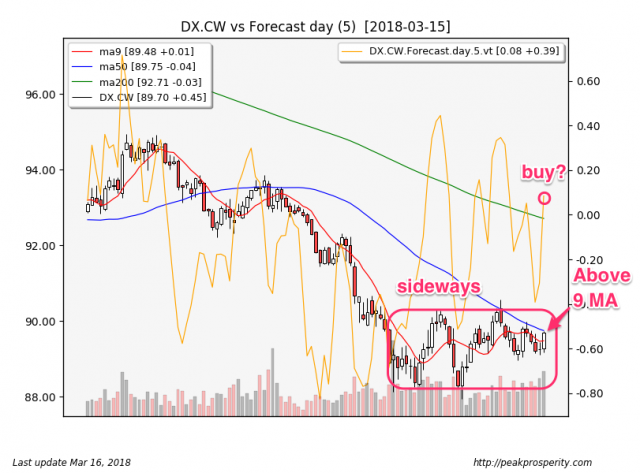 Crude rose +0.25 [+0.41%] to 61.22. In spite of the rise in the buck (and the selling in the other commodities) crude managed to move higher. Forecaster rose +0.20 to +0.02, which is a buy signal for crude. There have been a lot of those lately – but overall, crude has been moving slowly lower over the past few weeks.  I blame rapidly increasing shale production for the weakness in crude prices right now.

TLT was unchanged today, while TY fell -0.08%. TY printed a spinning top, which might be a (bearish) reversal (39%). Forecaster dropped -0.19 to +0.11. In spite of the recent rally, bonds continue to look relatively weak. Money might have been moving into USD today, but not much of it ended up in bonds.

JNK rose +0.06%, more or less unchanged on the day. JNK remains in a downtrend.

The sharp rally in the buck caused trouble for PM today. While the percentage moves were not all that large, today’s moves took PM components down to the low end of their recent trading ranges. It would not take much to cause a more general breakdown.  Large descending triangles are apparent for gold, silver, and the mining shares.  A decisive breakout by the buck would probably lead to a general breakdown below the base of these descending triangles – a “run, don’t walk” moment for PM.  I’m guessing that’s what managed money is setting up for – that is what is causing these large builds in open interest for gold and silver: managed money loading up short.

On the other hand, the FOMC meeting is only 5 days away, and gold tends to enjoy giving us all a scare in the days leading up to the meeting.  So this could simply be a move down to the base of the triangle which then bounces back higher after the meeting finishes next Wednesday.  That’s the optimistic view.

My suggestion is, keep your eye on the buck.  Gold-in-Euros is in a daily/weekly/monthly downtrend, and until that reverses, any move higher by the buck will end up causing big problems for PM.