Gold fell for most of the day, closing near the lows. The short black candle was a bearish continuation, and forecaster moved deeper into what is now a mild downtrend. Gold remains in a downtrend in all 3 timeframes. Gold/Euros looks roughly the same.  Gold is moving dangerously close to a breakdown, and momentum does seem to be pointing lower.

Futures are projecting a 5% chance of a rate increase in December. 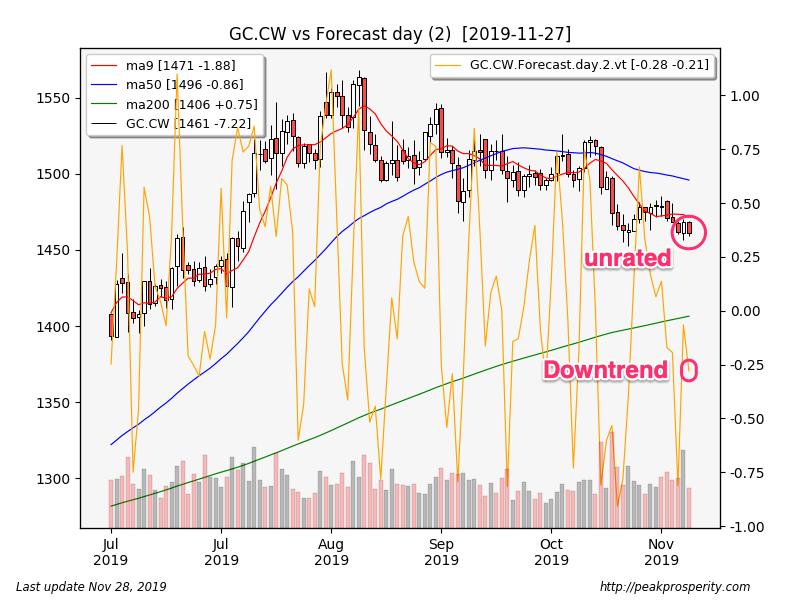 Silver also fell for most of the day, ending near the lows. The short black candle was unrated, and forecaster moved higher but remains in a very slight downtrend. Silver remains in an uptrend in both weekly and monthly timeframes.  Silver continues to look stronger than gold. 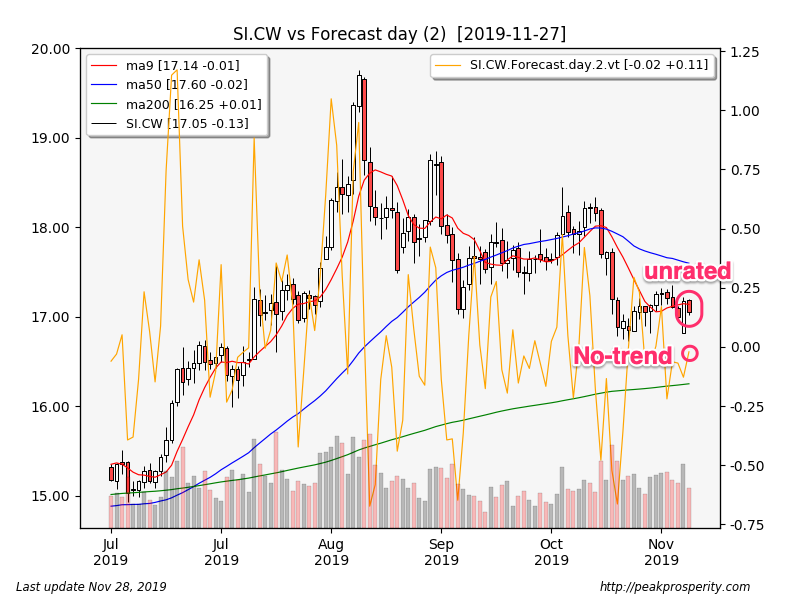 Miners gapped down at the open, and sold off for the first 90 minutes, then rallied back to eliminate most of the day’s losses. GDX dropped -0.45% on moderately light volume, and GDXJ fell -0.53% on moderately light volume also. XAU fell -0.85%, the doji candle was unrated, and forecaster moved lower, and remains in a downtrend. XAU remains in an uptrend in both weekly and monthly timeframes. The miners did reasonably well given the drop in both gold and silver.  Miners continue to look reasonably solid. 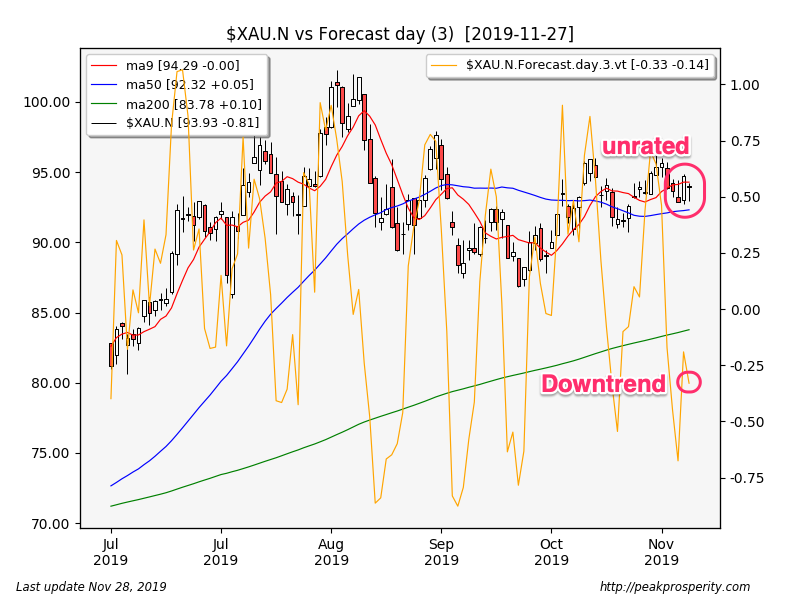 The buck rose +0.11 [+0.11%] to 97.92. The short white/spinning top candle was a bullish continuation, and forecaster moved lower but remains in a strong uptrend. The buck remains in an uptrend in the daily and monthly timeframes.

Crude fell -0.15 [-0.26%] to 58.09. The high wave candle was a bullish continuation, but forecaaster inched lower, and remains just barely in an uptrend. Today’s slight drop was just enough to pull weekly forecaster back into a downtrend. Crude is now in an uptrend in both daily and monthly timeframes, but that daily is looking like it might reverse lower at any moment.

The EIA report was bearish: crude: +1.6m, gasoline: +5.1m, distillates: +0.7m.  Crude sold off fairly hard following the report, but managed to mostly bounce back by end of day.

SPX rallied +13.11 [+0.42%] to 3153.63. The closing white marubozu was a bullish continuation, and forecaster moved higher into what is now a very strong uptrend. This was another new all time high for SPX. SPX remains in an uptrend in all 3 timeframes.  After market close, just after 6pm Eastern, Trump announced he was signing the HK Human Rights & Democracy Act – this caused the e-mini futures to drop by about 11 points in 15 minutes.

TLT fell -0.29%, the swing high pattern was slightly bearish (36%), and forecaster inched lower but remains in an uptrend. The 30-year yield rose +1 bp to 2.19%. TY also fell, losing -0.23%. The opening black marubozu was a bearish continuation, and forecaster fell into a downtrend. Today’s move took TY through its 9 MA, and puts TY in a downtrend in both the daily and monthly timeframes. The 10-year yield rose +2.7 bp to 1.77%.

JNK rallied +0.15%; that’s day #4 of strong rallies for JNK, and that is a risk on signal. The closing white marubozu was a bullish continuation, and forecaster moved higher into its uptrend. BAA.AAA differential remains at+90 bp. No worries about credit according to this indicator.

Any bets that the “retaliation” from the CCP will involve pulling away from their attempts to get Trump to drop his tariffs in exchange for pork and soybeans? Somehow, I doubt it. I believe they desperately want those tariffs to go away. The longer the tariffs remain in place, the more US businesses will leave China for elsewhere.

Corporate Profits: headline -0.4% y/y (prior +0.3% y/y). This is contractionary, and would seem to be bad news for equities. One would think, yes? But no – new all time highs for SPX.

Related: money printing number for Not-QE out on Friday.

Oh, FWIW, it appears as though bitcoin may have reversed on the daily chart: forecaster jumped into an uptrend yesterday. While my whiny comment last week didn’t mark the low, it was pretty darned close.

Investment advisor and former Assistant Secretary of Housing Catherine Austin Fitts thinks Vladimir Putin saying “the dollar is going to collapse soon” is a flashing warning for the U.S. dollar’s value in the not-so-distant future. Fitts explains, “What Putin is saying is the dollar is going into a steep decline, and what was interesting about his comment is he said ‘soon.’ . . . What is the ability of the U.S. military versus the Russian or Chinese military to defend the dollar’s position? That is intelligence that Putin has, and because Putin has this intelligence, people really stood up and I really stood up and took notice. If Putin has access to that intelligence, and I don’t, which is saying the dollar could go into a deep decline, we need to take a serious look at it. The dollar is clearly under pressure, and if you look at reserves, the central banks are buying gold and selling dollars, including the Russians and Chinese.”

Fitts also points out, “The dollar is holding, and yet, if you look at the price of household goods in America, where I live, it’s approximately 8% to 10% a year in prices of household goods (going up), and you can tell the money printing has been significant. If you look at what the Fed is doing in the repo market, we are really on the next QE. So, we’ve got a problem with currency debasement, and what Putin is saying is it’s going to go faster, a lot faster in 2020, and that is an issue I am looking at. . . . One of the scenarios I am looking at is the dollar declines significantly in 2020. . . . When you have real household inflation at 10% every year for the past five years, the dollar has really already taken a hit as are many fiat currencies around the world. . . . What has really supported the dollar is its huge market share both in trade and traditionally in reserves. . . . You need to withstand a scenario where in 2020, instead of getting 10% inflation, you need to withstand 20% or 25% inflation in real household goods. . . . I have been saying for many, many years the dollar is strong. This is the first time I started to see the potential for a crack in the armor. I think we have to be prepared for the potential for a more serious decline than we’ve been dealing with for the last five years.”

What adds to the uncertainty of the U.S. dollar is the “missing” $21 trillion that was discovered by Dr. Mark Skidmore and analyzed and recognized as a huge problem by Catherin Austin Fitts, publisher of the popular Solari Report. Also, analysis Fitts has done on the government making the “missing money” a “national security issue” with FASAB rule 56 (Federal Accounting Standards Advisory Board) makes the secret money a hidden horror the general public is totally unaware of. Fitts explains, “The dollar is under pressure because we have been talking about the ‘missing money’ and FASAB rule 56, and the dollar is not what it used to be. If you look at the integrity behind the dollar, it’s not there. If you read “The Real Game of Missing Money,” which we did this big article for investors to do due diligence, the arrangements behind the dollar and the Treasury market do not have integrity. The deceleration of the integrity of the dollar is very significant and serious. . . . You’ve got to be more resilient, and it’s not just finances, you’ve got to be more resilient in terms of safety. If we have this kind of breakdown with the rule of law with FASAB rule 56, it’s not going to take long before it breaks into your neighborhood.”

In early July, BullionStar covered the notable news from Poland’s central bank, that it had boosted its monetary gold reserves to 228.6 tonnes by buying 125.7 tonnes over the 2018-2019 period, with a staggering 100 tonnes of this total purchased at the Bank of England in London during the first half of 2019.

Not only that, but as part of its announcement, the central bank, National Bank of Poland (NBP), also stated that following its new gold accumulation, it was planning to repatriate (or bring back) about 100 tonnes of this gold from London to the NBP Treasury in Warsaw. This was also, according to the NBP, after Polish central bank employees had inspected the Polish gold and its storage arrangements at the Bank of England in June of this year. See “Poland joins Hungary with Huge Gold Purchase and Repatriation” for details.”

Fast forward to November, and on Monday (25 November), the Polish central bank announced, in a press conference hosted by NBP President Adam Glapiński, that its gold repatriation operation has now been fully completed, and that exactly 100 tonnes of the Polish gold has been transported from the Bank of England in London to the NBP Treasury in Warsaw.”

The article’s conclusion is also interesting:

Finally, back in July we pointed out that it was very coincidental to say the least that Poland had bought 100 tonnes of gold  at the Bank of England during the first half of 2019 and also wanted to repatriate ‘about 100 tonnes’ of gold to Poland:

“Having bought 100 tonnes of gold at the Bank of England this year, and now wanting to repatriate 100 tonnes, the question then arises, are the recent purchases of 100 tonnes the only gold the Polish central bank really has access to in London, with the rest in some way encumbered and unavailable?”

That question still stands, and is even more pertinent now given that the National Bank of Poland has now transferred exactly 100 tonnes of gold to Warsaw.  So where is the rest? The latest NBP press release says that “currently, the NBP holds 228.6 tonnes of gold, of which 105 tonnes are stored at the National Bank of Poland“. So that’s 105 tonnes safe and secure and held by Poland. But as Polish central bank president Glapiński said at his press conference this week, “half of the reserves, 123 tonnes, remain in England“.

If the Poles are serious that their central bank”build the economic strength of the Polish state” and “create reserves that will safeguard its financial security”, they should maybe hold off on their commemorative gold coin issue for the moment and first find out where exactly is this 123 tonnes of gold that is supposedly at the Bank of England. For something in all of this doesn’t smell right.

Some enterprising Poles may therefore want to ask the NBP to undertake a full physical audit of this 123 tonnes of gold, publish a full audit report, publish a full weight list of the gold bars in London (with refiner serial numbers), and publish a full disclosure of whether and how much of this 123 tonnes of gold is held in allocated form and how much is lent, loaned, pledged, or encumbered in any shape or form. That level of detail is easy for the Bank of England to produce and would indeed be worthy of a commemorative gold coin, but something tells me the central banks in question will not want to cooperate. ”