Gold rose +7.30 [+0.55%] to 1342.50 on moderate volume, while silver climbed +0.14 [+0.85%] to 16.70 on moderately heavy volume. However, today was all about equities – SPX was just crushed, falling -4.10%, wiping out a month’s worth of steady gains in one day of relentless selling. The usual 3:30 pm rally utterly failed, with traders treating the bounce as the perfect opportunity to sell. After market close, the e-mini futures continued to sell off, dropping an additional 50 points.

So where did the money go? The buck (+0.40%), gold (+0.55%), and the long bond (+0.94%). For gold to rally on a day that the buck saw gains is a reasonably good sign – although others have suggested that gold’s rally should probably have been stronger given just how bad the day was in equities.

I’ll talk about equities first, since I don’t want to bury the lead.

SPX fell -113.19 [-4.10%] to 2648.94. The massive loss resulted in a rare bearish strong line candle that might be a low (53%). Forecaster plunged -0.30 to -1.03, which is the lowest forecaster value in the past 4 months. Forecaster issued a sell signal last Tuesday; did anyone notice? I remember mentioning it, but not with any particular emphasis. So many headfakes lull you into a false sense of security – that’s how it always is. I suppose I need to add a module that lets my code grab me by the lapels and shake me if I don’t pay sufficient attention.

Below you will see some arrows I drew – while SPX may just head directly down, I think its more probable that the dip buyers are not yet dead, and so we will see a bounce that (again my guess) will end up being sold.   Market always acts to hose the most people possible – and that includes the long-suffering and now-gleeful shorts. 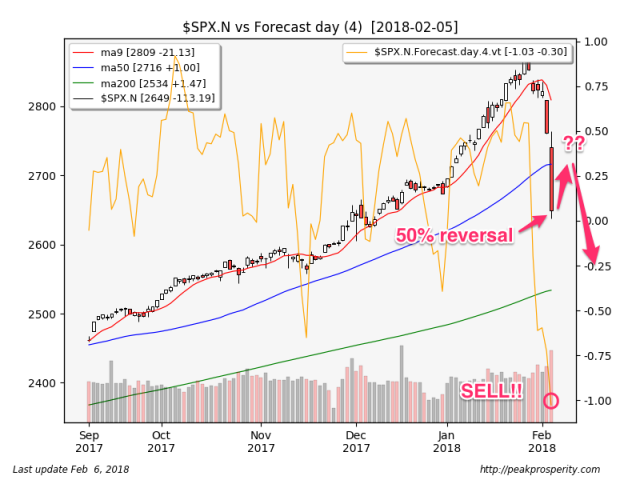 Sector map was quite bearish; financials led lower (XLF:-5.09%) along with industrials (XLI:-4.52%), with utilities doing best (XLU:-1.64%). When financials lead to the downside, you know you have a problem.

Worldwide, European equities were hit the hardest; reportedly this was because the SPD and CDU are having serious problems forming a government. They were expected to conclude an agreement this past weekend, but instead the talks are dragging on – with participants unsure as to when they will conclude.

The latest polls show the CDU down 2%, and the SPD down 3% from the levels of support they received in the election 4 months ago. If the election were held today, they would not be strong enough to form a government.

So what happened to gold today? Well, it moved steadily higher all day long, with a curious $5 up-spike at 3:05 pm. What was that about? I looked but could find no news item at that time. Gold held most of its gains through the close. Gold’s forecaster rose +0.27 to -0.19; that’s still a downtrend for gold. Should gold have screamed higher with today’s equity market sell-off? Maybe. It appears that traders continue to see USD and treasury bonds as the preferred safe havens. 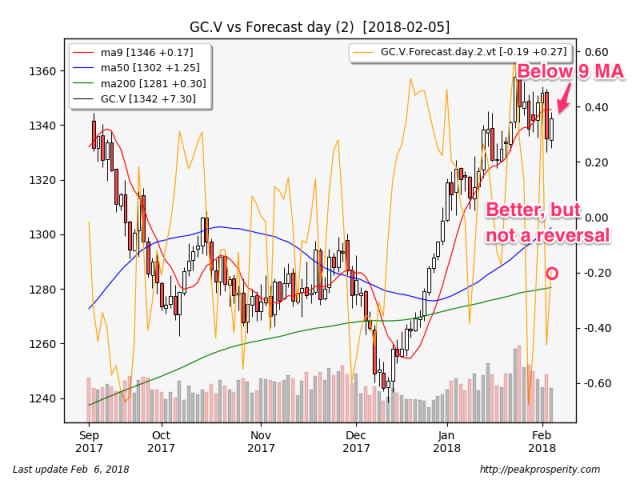 Silver rallied also, echoing gold’s slow but steady move higher. However given just how bad the sell-off was last Friday, today’s rally appeared a bit feeble. Candle print was a bullish harami (32% chance of a reversal), and the silver forecaster rose just +0.03 to -0.79. That’s not much of a move. Silver continues to struggle relative to gold. 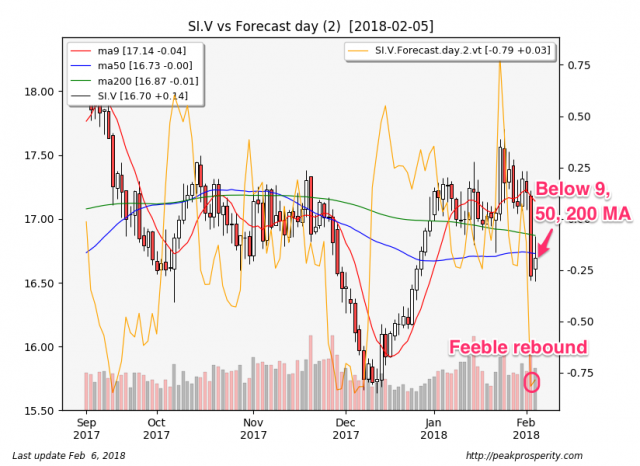 The miners gapped down at the open, fell some more, managed to bounce back but could not close in the green by end of day. GDX fell -0.87% on very heavy volume, while GDXJ climbed +0.28% on moderately light volume. GDX printed an opening black marubozu which had a 51% chance of being a bullish reversal; GDXJ printed a doji, which had a 56% of being a reversal. XAU forecaster wasn’t so optimistic, rising just +0.07 to -0.51. That’s still a strong downtrend for the mining shares. 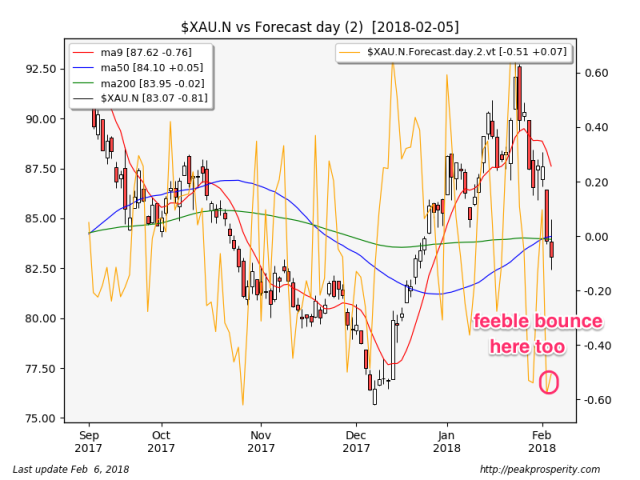 Platinum fell -0.16%, palladium dropped -1.70%, while copper rose +0.27%. Copper had a bit of a wild day, rising strongly in Asia and London, only to sell off hard once New York opened. All three of the other metals remain in downtrends.

The dollar rose +0.36 [+0.40] to 89.25. The buck rallied slowly for most of the day, starting in Asia and continuing on through the close in New York. Today’s move resulted in a 3-candle swing low for the buck, which took the forecaster up +0.10 to -0.13. The dollar’s move higher was – probably – due to both the bad news out of Europe regarding the German government, as well as a safe haven move driven by the heavy selling in the global equity markets. 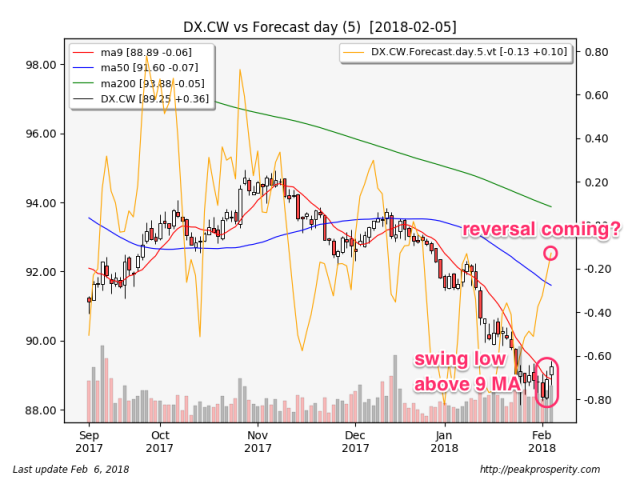 Crude plunged -1.67 [-2.57%] to 63.35. It appeared to me that the overall risk off sentiment was responsible for the downdraft in crude, vs some fundamental driver of supply or demand in the oil space. Crude printed a swing high today, making a lower high and a lower low, which is a sign of trouble for crude – but the candle pattern was not all that bearish, with only a 36% chance of marking a high; that’s pretty lame for the swing high pattern. Forecaster issued a sell signal yesterday, and dropped -0.29 to -40 today, which is a fairly brisk downtrend. I suspect crude is being treated as a risk asset, and so its fate will probably be tied to what happens in equities, at least to some extent.

TLT did well today, rising +0.94% and printing a very strong bullish engulfing pattern, which had a 69% chance of marking the low. The forecaster wasn’t quite as happy, rising just +0.21 to -0.49, which leaves TLT still in a downtrend. The TLT trading range was very wide, and even though the engulfing pattern was quite strong, TLT closed well below its high for the day. Its not clear to me that this ends the bond bear market – it feels more as though the shorts were ringing the cash register.

TY also staged a very strong rally, rising +0.96%, resulting in a bullish strong line candle – a 70% chance of marking the low. TY forecaster screamed higher too, rising +1.06 to +0.39, which is a buy signal for the 10 year treasury. Is this the low for a while, or just a short-covering reaction to a really bad day for equities? I suspect the answer depends on if we see some dip-buying in equities tomorrow. If the equity market plunge stops here, then bonds probably resume their downtrend – if equities continue to sell off, then bonds rally further. 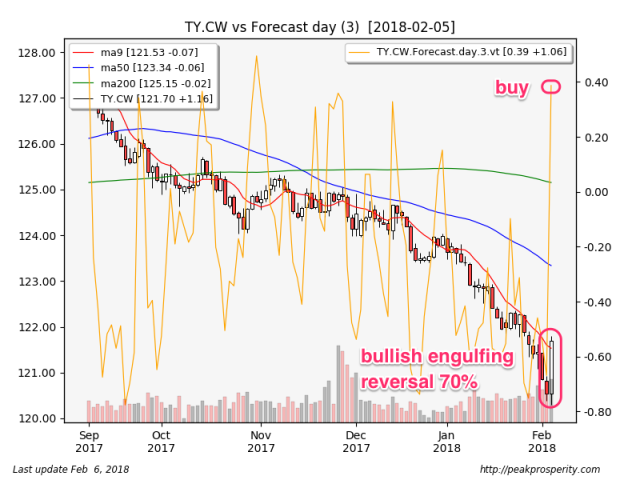 JNK was hit hard, falling -0.63%, printing a bear strong line candle, making a new low, and causing the forecaster to drop another -0.14 to -1.27 – that’s a steep downtrend. When JNK starts to sell off, it can really move quickly. More importantly, the JNK:IEF ratio fell hard for the first time in several months; this is a strong sign of risk off. When JNK falls while IEF rallies, that’s typically bad news for risk assets.

So where does all that leave us?

While I was writing this up, I note that the e-minis (SPX futures) sold off another 100 points in Asia, only to bounce back hard, printing a reasonably strong-looking hammer candle. Will this last through the close in New York? We will soon see.

Meanwhile, gold is still playing second fiddle to the buck and treasury bonds as a safe haven. The OI changes today suggest that the commercials did not appear to be suppressing price. The move higher in gold was reasonably good, given that the buck rallied too, but it wasn’t BRExit-type good.

My guess is that after a rally, bonds will continue selling off because the pressures that are pushing bond prices down haven’t gone away. That should weaken equity prices too – at least based on the correlations I have.

Longer term, this means – most likely – lower equity prices going forward. Rallies should probably be sold. Near term, we could bounce hard. SPX has gone from sleepy backwater that always rallies to a crazed crypto currency clone almost overnight.

I’m going to hope that all the correlations I’ve seen over the years will end up holding true during this period.

Just for amusement, I ran the monthly forecasters to see what things will look like if we ended up closing at these levels on the 28th.  Here are the new monthly sell signals in February: DJIA, BAA bonds, palladium, platinum, silver.