Gold tried to rally, topped out at about 7 am, and then spent the rest of the day moving lower. The spinning top candle was a bearish continuation, and forecaster remained in a reasonably strong downtrend. Gold remains in a downtrend in both daily and weekly timeframes.

Futures are showing a 1% chance of a rate increase in March, and a split in December (9% chance of an increase, and a 3% chance of a cut). That is a relatively more hawkish prediction than we saw yesterday. 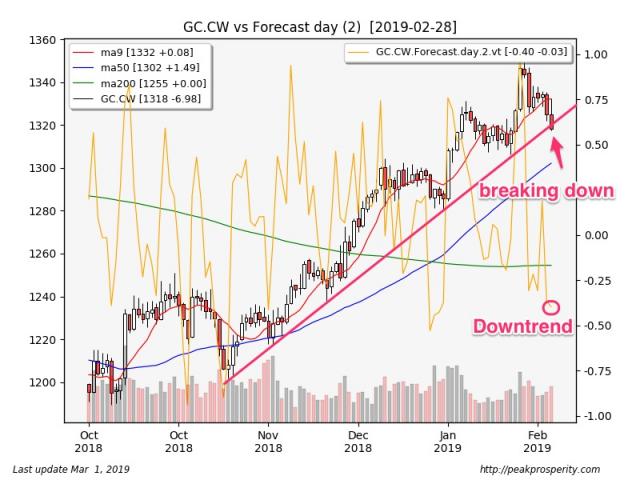 Silver looked like gold, topping out around 7am and then selling off for the rest of the day. The long black candle was a bearish continuation, and forecaster moved deeper into a downtrend. Silver remains in a downtrend in both the daily and weekly timeframes. 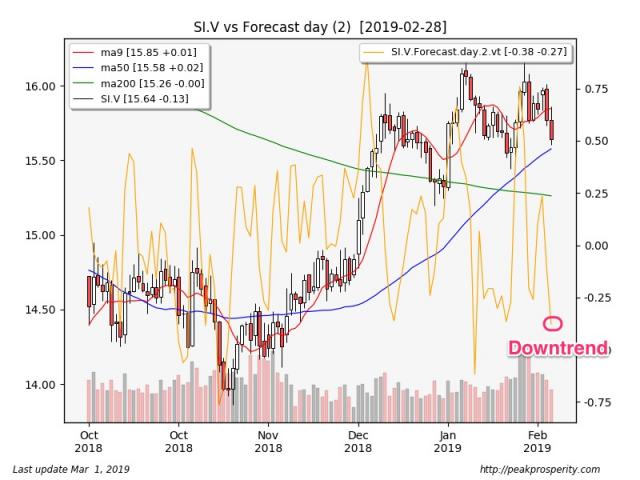 Miners moved lower today, with GDX off -0.49% on moderate volume, while GDXJ fell -1.04% on moderate volume also. XAU moved down -0.54%, the short black/spinning top candle was a bearish continuation, and forecaster moved deeper into its strong downtrend. XAU remains in a downtrend in both daily and weekly timeframes. 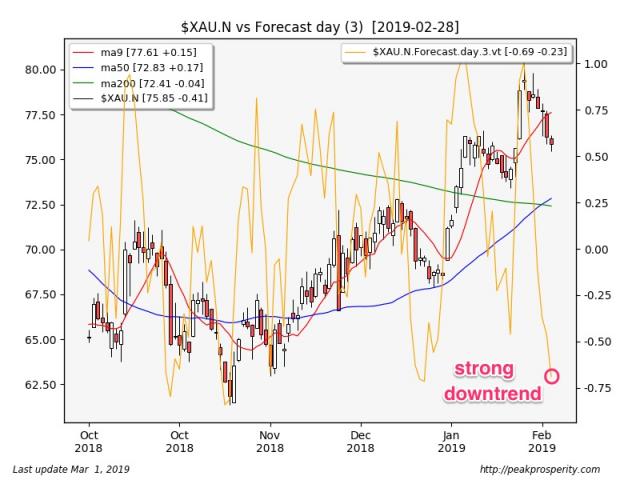 The buck fell -0.01 [-0.01%] to 95.62. The trading range was quite wide – the high wave candle was a bearish continuation, and forecaster moved higher, but remained in a downtrend. The buck remains in an uptrend in both the weekly and monthly timeframes.

Crude rose +0.25 [+0.44%] to 57.65. Trading range was narrow; the short white/spinning top candle was a bullish continuation, and forecaster moved higher into its uptrend. Crude is in an uptrend in all 3 timeframes.

SPX dropped -7.89 [-0.28%] to 2784.49. The short black/NR7 was unrated, while forecaster moved lower, but remains in a mild uptrend. If SPX is topping out, it is doing so very slowly, although today’s move took SPX below its 9 MA. SPX remains in an uptrend in all 3 timeframes.

TLT fell again to day, down -0.34%, making a new low. TLT remains in a fairly strong downtrend. TY also dropped, losing -0.26%. The long black candle was a bearish continuation, and forecaster plunged deeper into downtrend. So much for that bond breakout. Still, TY remains in an uptrend in both weekly and monthly timeframes, and today’s drop found support at the 50 MA. The 10-year treasury yield rose +3.5 bp to 2.75%.

JNK was unchanged again today. JNK remains in an uptrend.

The PM correction is steadily getting worse.  While the shorts are covering as prices fall, the strong bid that was under gold before seems to have vanished, at least for the time being.  There should be some support around 1305-1310.  If we drop through that area, then the selling in gold could pick up, as that would be a lower low, which would invalidate the gold uptrend.

Commercials are always right.  Only thing you need to know.  One day, they won’t be.  But that day is probably far, far away.  At least we’ll be at all time highs in equities soon and will be able to confirm that the bull market is still rolling strong.  Look for miners to catch down sharply soon.  They’re off today, but we’re due for a disasterous day soon.

There was nothing but horrible economic news yesterday, last night and today with the sole “exception”, possibly, of China’s PMI coming in under 50.0 but not as much under 50 as projected.

Leaving aside the fact that China’s statistics are even more reliably slanted to the upside than anyone else’s, the PMI was still showing contraction.

Meanwhile the US GDP first read is coming in barely above 0, consumer spending seems to have cratered, and so forth.

Add that all up and what is Team Elite to do?

And so they have, in spades today.

None of this has to make sense, and sometimes I’m convinced that’s actually the point.  The more confused your quarry is, the better the chance you have of forcing it into some sort of paralysis or major mistake.

In a long list of major corruptions, today’s “”market”” action stands out as particularly and obviously rigged.

Things are not as good as when we made all time highs last year, yet it won’t be long until we’ve broken out above those highs.

When Team Elite decided to smash gold, they asked around and the concensus was for “the usual.”

That would involve waiting patiently for two known fundamental drivers of lower gold prices to intersect. 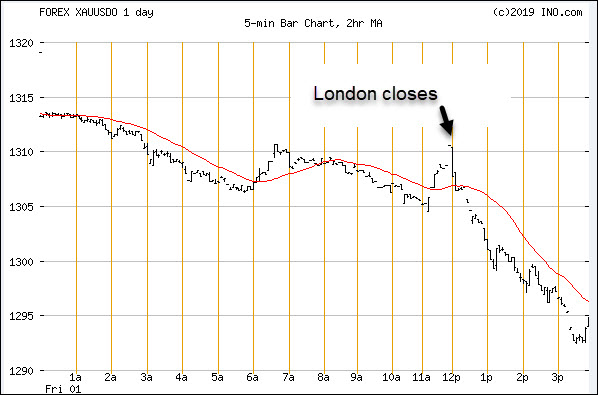 The timing was flawless.  Literally to the minute.

Now to hit “send” on all the pre-written articles that will hit the weekend news papers describing how “investors” were cheered by this or that and how gold has lost all its mojo.

Yes, there’s a psy-ops underway, and it’s aimed at all of us.

CR, What are you basing these opinions on?  (New highs in stock market and new lows in miners)

You may be right, but hunches and gut feelings are not valid investment strategies.