Today was month end, and so I figured I’d show some of my monthly charts.  Some of them haven’t updated fully yet (they take as inputs metadata from various sectors that update only later) but it should give you a sense as to where the longer term trends are.

The trading range for gold today was quite narrow; the doji candle print was a bearish continuation. Forecaster rose +0.17 to -0.33. That’s an improvement, possibly because gold managed not to collapse while the dollar moved higher.  Monthly chart shows gold in an ascending triangle pattern, with resistance at the previous high of 1377.50.  The monthly forecaster looks as though it is just about to reverse into a downtrend. 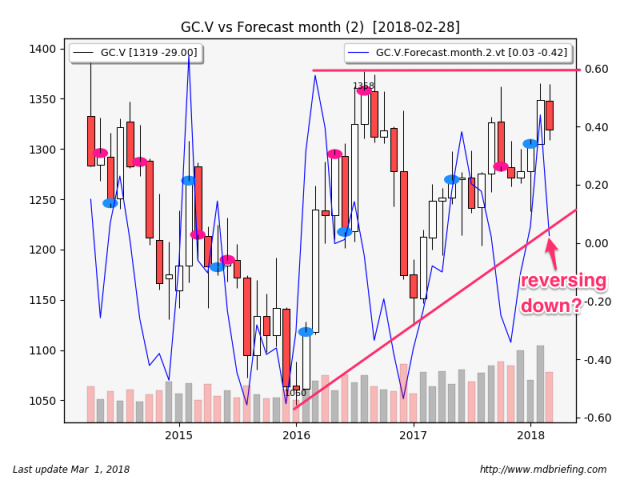 Silver also had a narrow trading range today, printing an inside-day (neutral) doji candle. SI forecaster jumped higher, up +0.20 to -0.03. That’s almost a buy signal for silver.  The monthly chart is quite bearish, showing a descending triangle pattern; last month’s almost-breakout has reversed, and silver is now moving strongly lower.  Will the old 15.75 support level hold – it is an important question, especially if the dollar starts to take off more vigorously.  You can see why the gold/silver ratio is so high – silver’s chart pattern looks bearish, while gold’s pattern is bullish. 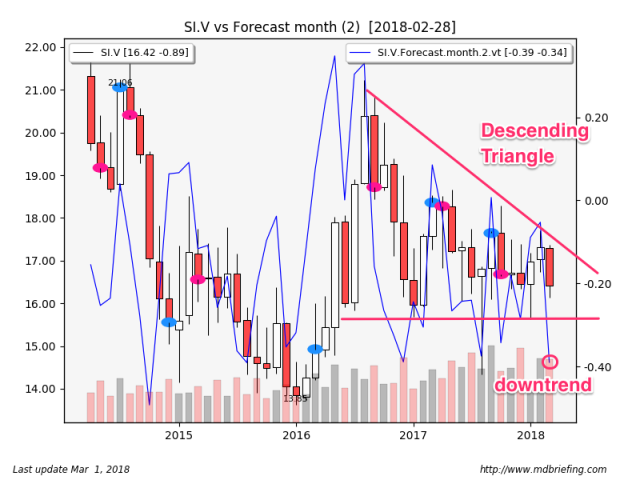 Miners tried to rally but failed, with GDX off -0.65% on moderately light volume, and GDXJ down -0.44% on very light volume. Trading range for the miners was narrow as well, with both ETFs printing short black candles. XAU forecaster moved up +0.06 to -0.29; that’s still a downtrend. Still no real buyers for mining shares.  The monthly chart shows that XAU followed through to the downside off last month’s sell signal.  We can also see that the forecaster spent most of 2017 in a downtrend.  This suggests to me that momentum for the mining shares remains down.  A break below the lower uptrend line could lead to a lot of selling, and would probably happen if the dollar starts to rally more strongly. 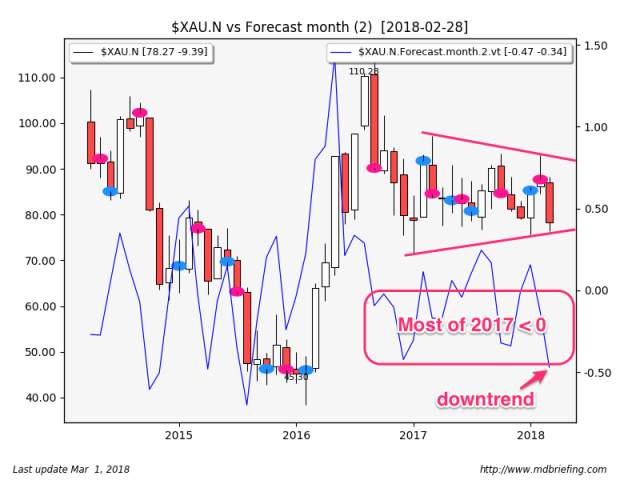 Platinum rose +0.03%, palladium moved up +0.55%, while copper plunged -1.68%. Copper is back to looking weak, and that doesn’t bode well for the metals group overall. It was a big drop today in copper. I’m a bit surprised silver was hit harder, since it sometimes will follow copper.

The buck rose up to the double bottom confirmation line, poking briefly above it, and closing +0.25 [+0.28%] to 90.24. It seems likely that a confluence of factors will conspire to drive the buck through 90.29 – including Powell’s apparent support for 4 rate hikes this year, political issues in Europe, and Draghi’s insistence that he will continue his bond-buying program.  On the monthly chart, you can see the dollar’s fairly dramatic decline from the highs at 103 down to the current 90 level, where it looks as though it may be preparing to reverse higher.  The 13% drop in the buck more or less caused the 18% rally in gold during 2017.  If the buck reverses significantly, I’d expect gold to decline, unless we see a crack in confidence. 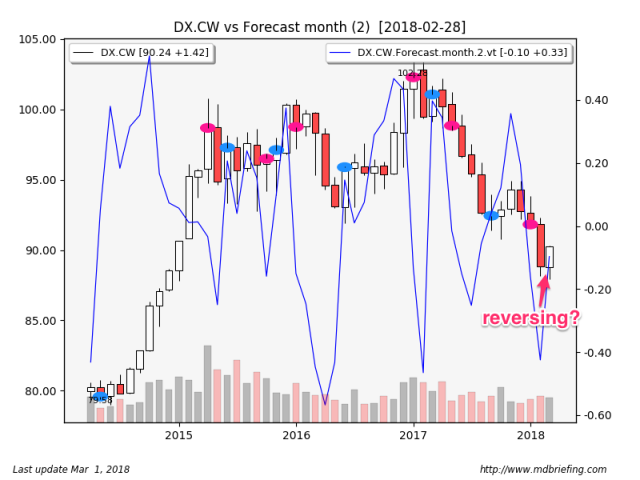 Armstrong suggests that the bond-buying campaign in Europe has less to do with the official reason of “causing inflation”, and much more to do with monetizing the debts of the Eurozone nations that otherwise would probably end up entering a sovereign debt crisis:

Draghi realizes that he is subsidizing the European governments. He is not stimulating the economy, he simply has them on life-support. Stopping the bond program will lead to a major crisis when there is NO BID for government bonds. Not only will Draghi keep buying government debt, he will be repurchasing debt that has expired. He will not reduce the balance sheet as the Federal Reserve is doing.

Crude followed through off yesterday’s swing high/forecaster sell signal, dropping -1.29 [-2.05%] to 61.55. The bearish-looking EIA report didn’t help [crude +3m, gasoline +2.5m, distillates -1m].   Although the daily forecaster is in a downtrend, when we look at the monthly chart, we see that crude bottomed out in early 2016, and pretty much hasn’t looked back.  It does appear to be encountering some selling pressure above 60, but the forecaster still sees the longer term trend as up. 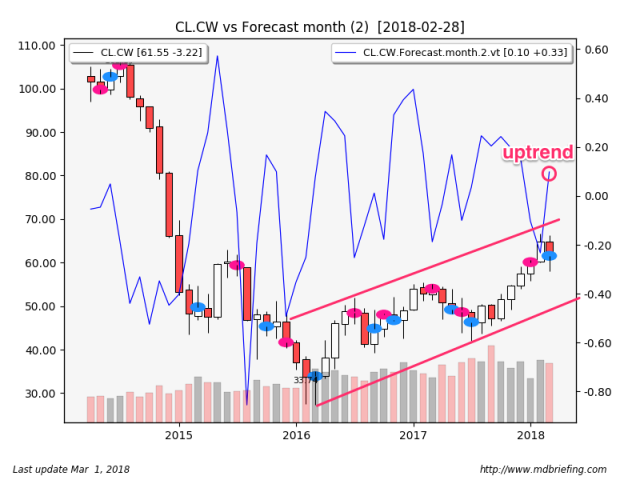 While the daily remains in an uptrend, at least for now, the monthly chart shows a relatively rare sell signal; while the rebound off the lows was significant, creating a large lower shadow, it wasn’t enough to convince the forecaster to remain in an uptrend. 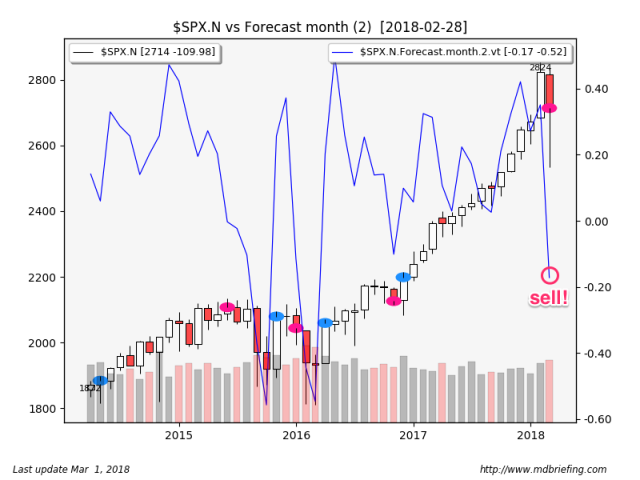 TLT did well today, rising +0.64% – the highest close for TLT in 8 trading days. This is a swing low for TLT. Forecaster issued a buy signal several days ago. TY isn’t doing quite as well, up +0.20%, but it did manage to rise back above its 9 MA, which is a positive sign. TY forecaster remains in a downtrend, although it appears to be trying to recover.  Still, if bonds are putting in a low, they sure are taking their time about it.  The monthly chart tells us why – bonds have continued dropping after the breakdown in January, with no sign of a rebound. 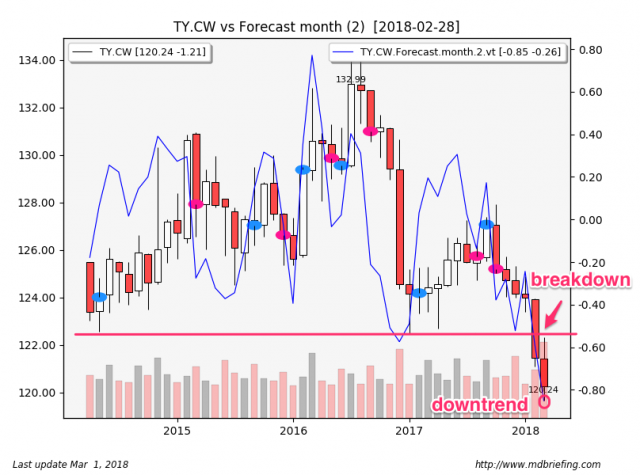 JNK fell -0.08%, stopping right at the 9 MA. JNK forecaster fell -0.25 to +0.06, but remains just barely in an uptrend. JNK is doing surprisingly well given the sell-off in equities and crude oil.

CRB fell -0.74%, with 4 of 5 sectors falling, led lower by energy (-2.45%). PM was actually one of the better performers on the day, down just -0.06%. Industrial metals, livestock, and energy all look as though they are entering downtrends, with livestock looking weakest. Agriculture is the sole source of good news.

It looks as though the buck has figured out where it is going – and that’s up. While PM managed to avoid disaster today, the miners are hinting that this is not likely to continue if the buck continues to rally. I read various pundits who say “the Fed can’t possibly raise rates” but my sense is, they are going to continue doing just that. And we may get 4 rate increases rather than just 3.

Over the long haul (i.e. since 1984), rising 1-year and 10-year rates are modestly positive for the buck. Rising commodity prices are a negative influence on the dollar, with rising gold prices being the worst.

Currently there appears to be a concern about an oversupply of bonds driving USD bondholders to sell, putting pressure on USD. Once that selling pressure abates, rising rates should pull people back into the currency, especially when they compare it to what they can earn holding Euros, which is the competition for the buck – at least for big money.

Shorter term, there are the Italian elections, as well as the SPD vote in Germany this weekend. I expect the buck will continue to move higher ahead of events this weekend.

That’s probably not great for gold, unless the safe haven thing starts to happen.