There were a number of drivers for currency today; one was the testimony of Jerome Powell before Congress, which was released at 8:30 am. The Econoday summary went like this:

The new Fed chair said policy makers need to lift inflation but at the same time avoid overheating of the economy. He noted that wages should begin to increase at a faster pace and cited what he sees as a strong outlook for the economy including foreign demand for U.S. exports which he said is firming…

“On the one hand, we want inflation. On the other hand, we don’t want too much inflation.” What does that mean? Who knows.

There was also a disappointing Durable Goods orders report at 8:30 am, which fell -3.7% m/m. This lined up with the recent, and relatively weak Industrial Production report, which also fell m/m.

Gold chopped sideways until 8 am, at which point it started selling off, more or less tracking the Euro which did essentially the same thing. The plunge in the Euro was fairly dramatic, losing almost a full point in about two hours, and that took gold down about $20. Gold forecaster plunged -0.46 to -0.47. You can see the distribution pattern in the chart – down day volume is higher than up day volume.  A break below the previous low of 1309 would be bad news. If the buck double-bottoms, that could easily happen. 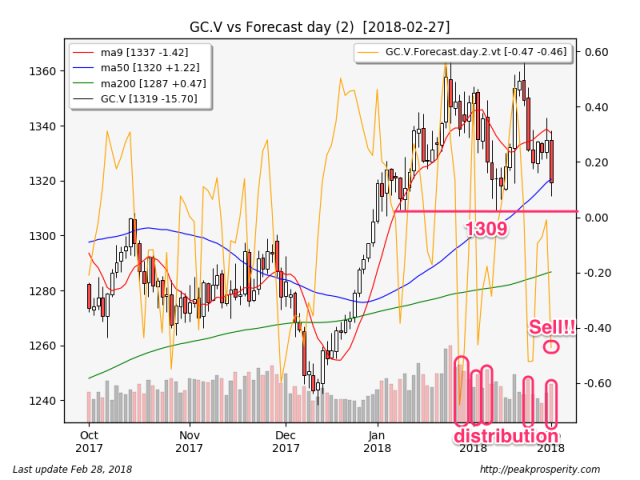 Silver mostly tracked gold, starting its plunge at 8 am and plunging alongside the Euro. Silver printed a bearish engulfing, and the forecaster plunged -0.48 to -0.18, which is a sell signal for silver. However, silver’s chart hasn’t broken down quite to the extent that gold’s chart has. 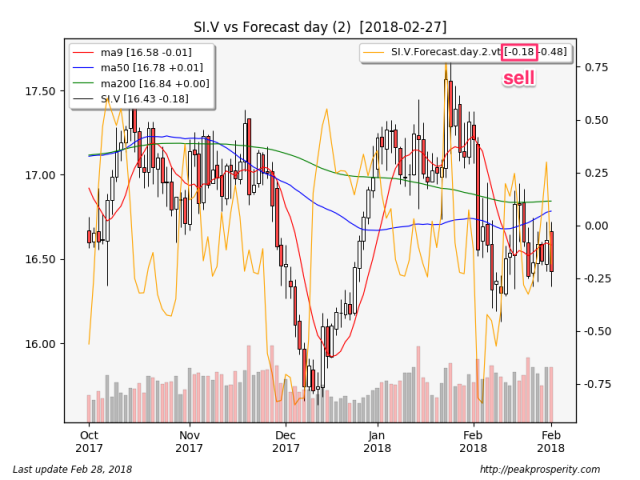 Miners were hammered, with GDX down -3.11% on very heavy volume, while GDXJ fell -2.93% on extremely heavy volume. The XAU forecaster plunged -0.42 to -0.41. Yesterday’s lame XAU buy signal was just a headfake.  The miners have been weak since late January, and it feels as though the selling pressure is getting stronger.  A break below the Dec low could lead to a lot of selling; that’s likely to happen if the buck confirms that double bottom pattern. 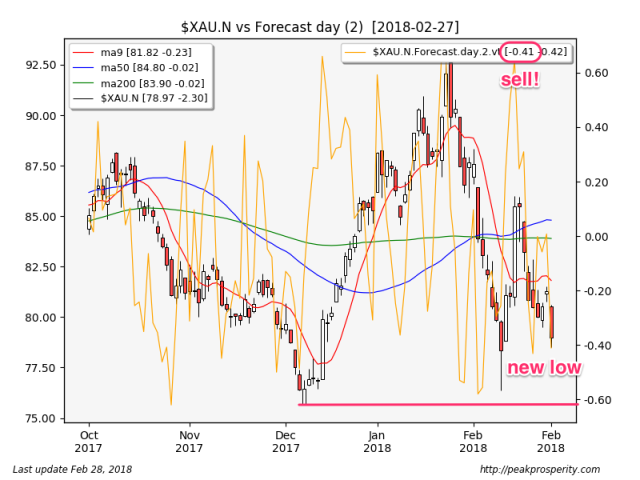 Platinum fell -1.69%, palladium plunged -2.25%, and copper dropped -1.30%.  That resulted in sell signals for both copper and platinum, with palladium hanging onto its uptrend – for now anyway.  The other metals were not happy with the dollar rally.

The buck rallied strongly today, up ,+0.48 [+0.54%] to 89.99, mostly because of the drop in the Euro [-0.67%]. DX forecaster moved up +0.25 to +0.12, which is a buy signal for the buck. This signal looks a little more compelling than the one we saw a few days back. The buck is not very far from breaking above that “double bottom confirmation” line at 90.29; if it does so, that’s a technical signal that the longer-term trend in the buck has reversed, and is now up. The weekly DX forecaster is quite close to issuing a buy signal also. 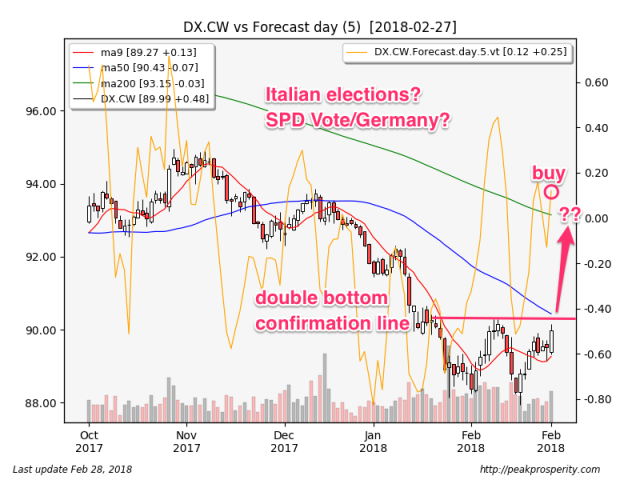 The strong morning rally in the buck caused commodities to sell off; with gold in Euros more or less chopping sideways, currency moves drive everything.

If the dollar breaks through 90.29, and there isn’t a safe-haven mood that accompanies the move, the selling in PM could get a lot worse.  That hasn’t happened yet, but it looks as though traders (especially in the mining shares) are getting nervous ahead of time.