Gold rallied strongly in Asia right alongside the Euro, peaking out at 1343. As the Euro topped out and started dropping, so did gold; the two didn’t move in lock step, but currency was definitely a strong influence on the gold price today. Candle print was a spinning top – neutral. The long upper shadow for gold definitely looked like a failed rally.  Forecaster moved up +0.11 to +0.04, which is a buy signal for gold, although not a particularly strong one.  Gold remains below its 9 MA. 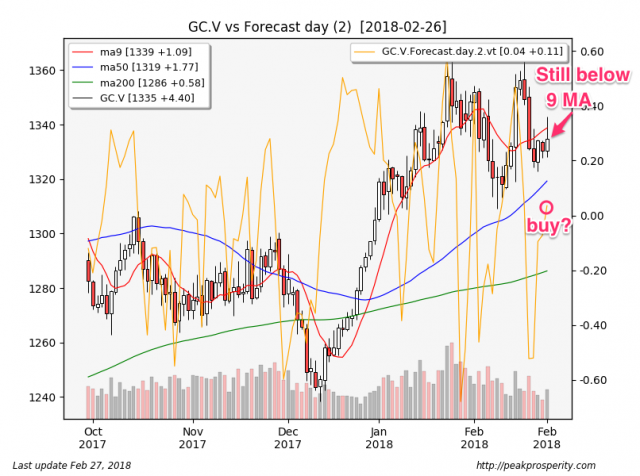 Silver mostly tracked gold, although it performed distinctly better, and the volume was substantially higher also. Candle print was a long white candle, which was neutral. Forecaster issued a buy signal on Friday, and continued moving higher today, up +0.13 to +0.20.  The upper shadow was quite a bit shorter for silver (vs gold), and silver managed to close back above its 9 MA.  The silver forecaster also looks a bit more enthusiastic. 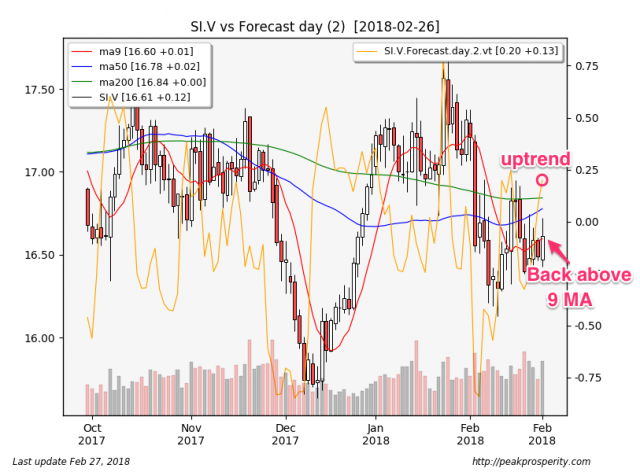 Miners did reasonably well, with GDX up +0.96% on moderately light volume, and GDXJ climbed +1.75% on moderate volume. Both miner ETFs printed swing lows, but they were both rated neutral by the candle code. XAU forecaster moved up +0.06 to +0.01, which is a buy signal for XAU, although a tepid one.  XAU remains below its 9 MA.  This shows that the miners are doing less well than silver, and perhaps similar to gold.

Today, the GDXJ:GDX ratio rose, as did the GDX:$GOLD ratio. That’s somewhat bullish. 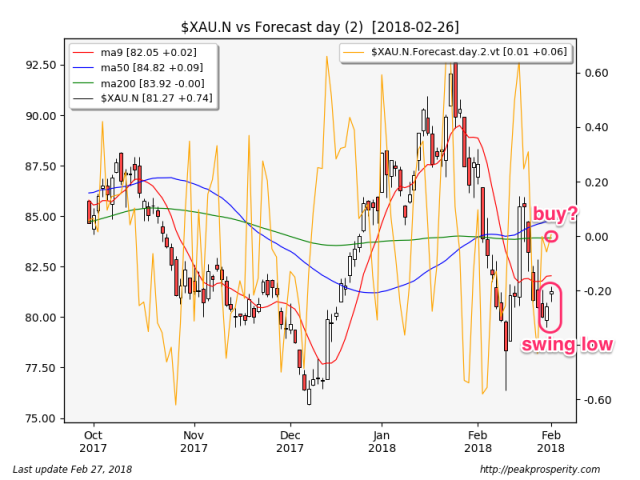 Platinum rose +0.38%, palladium climbed +1.30%, while copper rose +0.55%. Palladium broke out to new highs on heavy volume, platinum forecaster issued a strong buy signal, and copper forecaster also issued a buy signal. All the other metals are back in uptrends.

The buck edged down -0.03 [-0.03%] to 89.51. The trading range was fairly large, but by end of day things ended up largely where they started. Candle print was a (neutral) high wave, and the DX forecaster fell -0.13 to -0.11, which is a sell signal for the buck. I’m not so sure about the directional change; it feels more like the buck is unsure about where it will go next.   This is even more clear on the weekly chart.  BBoth weekly and monthly DX trends remain down, so that’s the bias right now. 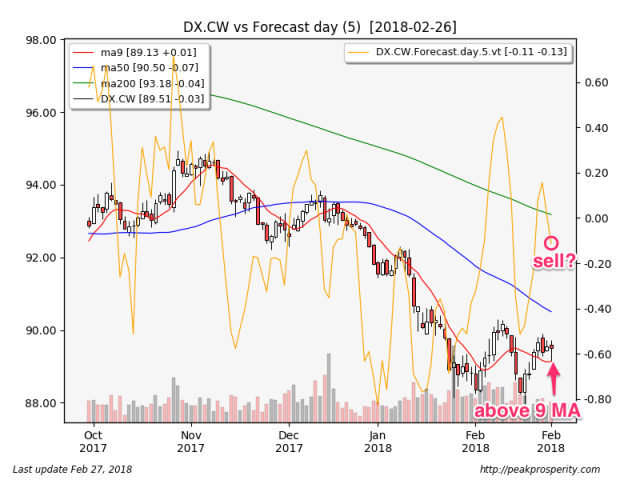 Crude continued moving higher, up +0.43 [+0.68%] to 64.00. Volume continues to fall as price rises, which isn’t a great sign. I’m guessing the serious selling pressure will appear above 65.  I’m working on one of those reversal detectors for crude, and it is giving off hints that it might be time to sell.  It will be interesting to see if that ends up being true.

JNK moved up +0.22%, rising along with equities, although the rally in junk debt was a bit more tepid that I would have expected given the strong move in equities. Its just a cautious risk-on from JNK.

Here’s what I see: SPX, crude, palladium, and JNK are all moving up together, along with currencies such as THB, RUB, and INR. Those are roughly “good economy/risk on” indicators, with some energy thrown in for good measure. Meanwhile, gold, silver, and platinum are very closely (inversely) correlated with EUR and CHF.

These two groups are not moving so much in sync with one another, and that’s why the picture seems to be a bit confusing.

Bottom line for PM though: buck is more or less driving price. And right now, the buck doesn’t seem to have a clear direction, although the longer term indicators are still pointing down.  I remain cautiously optimistic on silver, given all the buying by the commercials.

Maybe that will change by this weekend: we have the Italian elections, plus the SPD vote in Germany coming up on Sunday.