Not Some People’s President tweeted:

I am pleased to report that the U.S. has made substantial progress in our trade talks with China on important structural issues including intellectual property protection, technology transfer, agriculture, services, currency, and many other issues. As a result of these very……productive talks, I will be delaying the U.S. increase in tariffs now scheduled for March 1. Assuming both sides make additional progress, we will be planning a Summit for President Xi and myself, at Mar-a-Lago, to conclude an agreement. A very good weekend for U.S. & China!

And that’s (probably) why the SSEC went nuts – its highest close since June 2018, marking 8 straight weeks up since the lows set back in December with a massive gain on Monday.

Gold didn’t do much; the short black/NR7 candle was unrated, and forecaster was little changed, remaining in a downtrend. Still, gold remains above all 3 moving averages, and is in an uptrend in both the weekly and monthly timeframes. 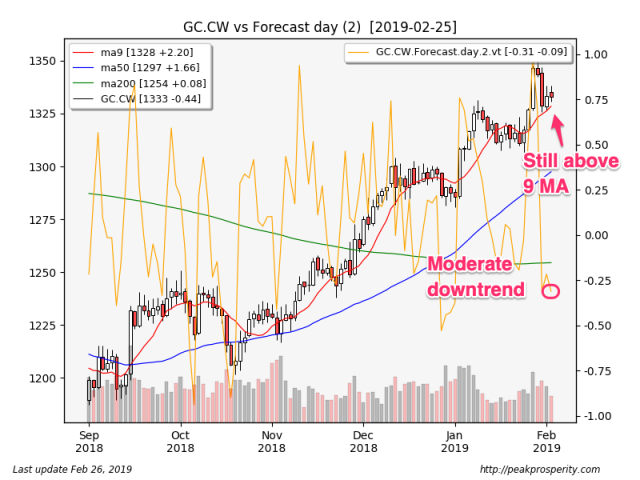 Silver had a larger trading range than gold, but ultimately went mostly nowhere too; the spinning top candle was neutral, but forecast jumped higher, resulting in a buy signal. Silver is now in an uptrend on the daily and monthly timeframes, and it also remains above all 3 moving averages. 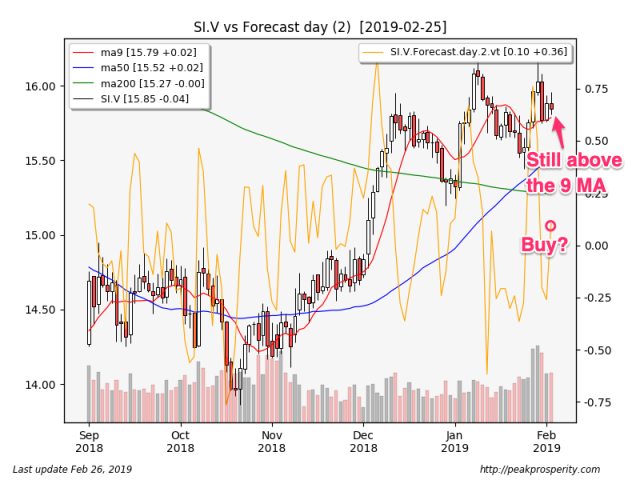 Miners moved lower today; GDX dropped -1.26% on moderately heavy volume, while GDXJ fell -1.86% on moderately heavy volume also. XAU moved down -0.94%, making a new low; the candle print was a confirmed bearish shooting star pattern (49% reversal); forecaster agreed, plunging hard, issuing a sell signal for the miners. Today’s move was enough to cause a sell signal on the weekly timeframe as well. While XAU remains above all 3 moving averages, it is in a downtrend in both daily and weekly timeframes.  That’s a bit of a warning sign from the mining shares.  A drop through the 9 MA would be a slightly louder warning sign. 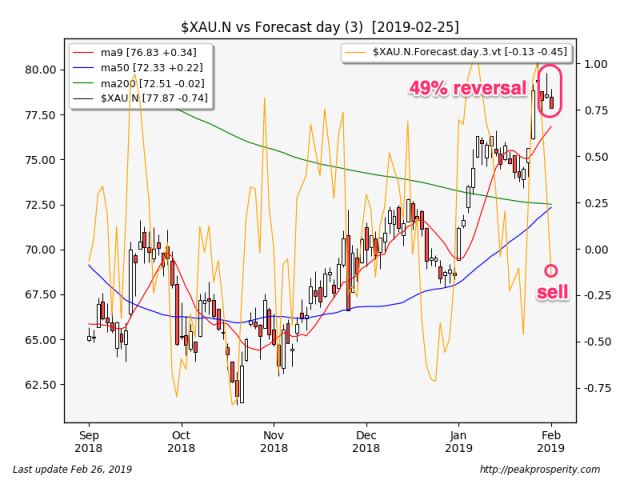 Platinum rose +1.22%, palladium shot up +2.98%, while copper dropped -0.14%. It looks as though the word is out: lots of paper palladium, and not so much physical. Palladium is starting to go vertical; the volume continues to grow every day. Palladium hit yet another new all time high: 1509. The RSI-7 for PA is 83.83. That’s overbought, but not horribly so.

The buck fell -0.10 [-0.10%] to 95.88. The buck didn’t go anywhere today either; the spinning top was a bearish continuation, and forecaster moved a bit lower, remaining in a downtrend. +0.17 [+0.18%] to 96.07. The spinning top candle was a bearish continuation, and forecaster remains in a strong downtrend. However the rally did manage to unwind the weekly sell signal; the buck is now in a downtrend in the daily and monthly timeframes.

Crude plunged -1.64 [-2.85%] to 55.82. Yet another tweet: “Oil prices are getting too high. OPEC, please relax and take it easy. World cannot take a price hike – fragile.” Boom, crude plunges a buck and a half. Candle print was a swing high (55% reversal), and forecaster moved deeper into a downtrend. Crude also ended the day below its 9 MA, which is a danger sign. That said, crude remains in an uptrend in both the weekly and monthly timeframes. 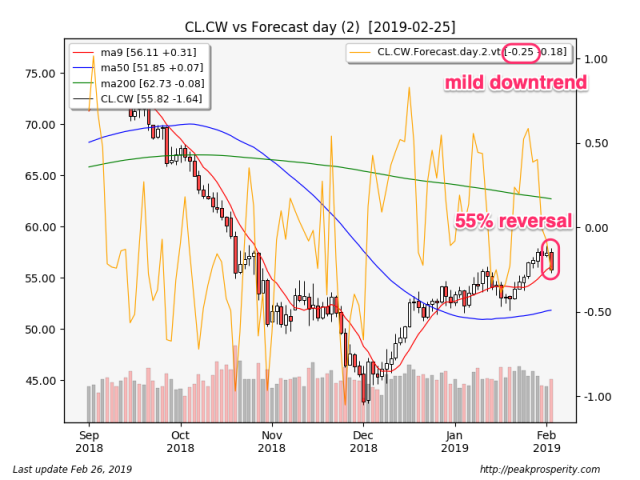 SPX rose +3.44 [+0.12%] to 2796.11. SPX moved higher in the futures markets overnight, made a new high to 2814, and then sold off for the rest of the day. The spinning top was a bullish continuation, and forecaster inched higher – remaining in an uptrend. SPX remains in an uptrend in all 3 timeframes.

JNK rose +0.08%, gapping up at the open, then selling off for much of the day. It was a new high for JNK today, which remains in a steady uptrend.

CRB plunged -1.26% – that’s a swing high for CRB. That’s probably about energy, but the closing times for my commodity sector maps don’t reflect a big move down in any of the groups.

While the SSEC rose sharply, and crude was hit fairly hard, the US equity market was perhaps more interesting; it went nowhere.  That suggests we may well not see any pop at all from the trade deal signing.  Gold didn’t seem to care either.  It will probably be a bit of a risk-on move (the AUD rally suggests that too), but that probably means money leaving the US for Asia.

This is how we predict the future – by seeing how the different markets react to the same news.  Perhaps SPX might be close to topping out.