So what was in those FOMC minutes? FOMC members now expect economic activity for 2018 to exceed the December estimates, and are optimistic about achieving their inflation target of 2%. To me, and probably to the market, that added up to another confirmation that “inflation is coming.”

Gold chopped sideways for most of the day, spiking up $7 at 2 pm, but the rally lasted only about 20 minutes. Then selling hit which took gold down $14 over the next hour.  Gold seemed to just track the Euro, which had much the same pattern – first a sharp rally at 2pm, and then a brisk sell-off about 20 minutes later.  Candle print was a spinning top/bearish continuation. Gold forecaster dropped -0.02 to -0.55, which is no real change to direction or velocity.  With EUR/USD down -0.44%, today’s move in gold was just a currency effect.

That said – if the buck continues to rally, the currency impact of that move suggests gold will eventually drop through the previous low at about 1310, which would confirm a bearish double top pattern.  The breakdown would probably lead to a fair amount of selling. 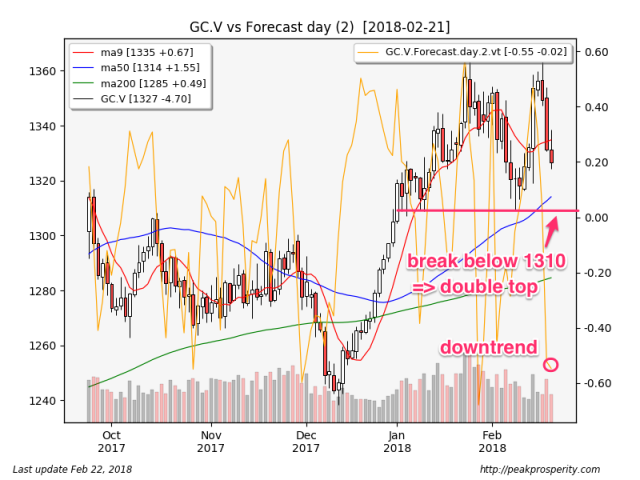 Silver was tracking copper more than gold today, starting its rally at 8:30 am, up as much as 20 cents prior to the FOMC release at 2pm.  Silver also spiked higher at 2 pm, and sold off about 20 minutes later, like gold, but it managed to keep at least some of its gains into the close. Print today was a weak bullish harami, which was just a bearish continuation. Forecaster dropped -0.01 to -0.34. Like yesterday, silver was a bright spot in an otherwise bearish PM picture.  The trading range for silver was 40 cents, which is relatively wide. 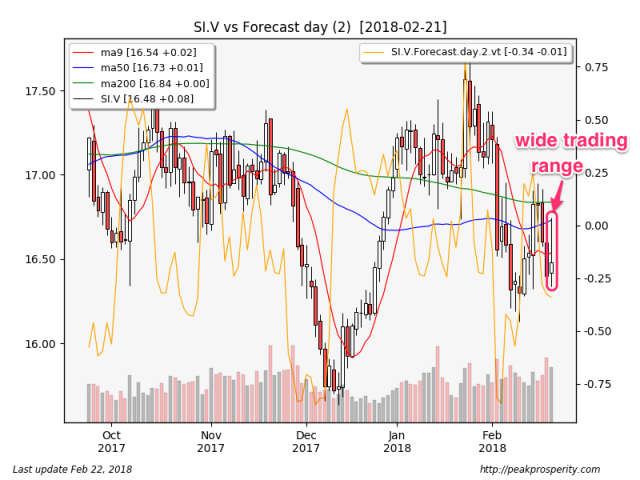 Miners moved higher early, and then spiked up right after the FOMC minutes release at 2 pm, but then tanked along with gold, eventually ending slightly down on the day.  GDX fell -0.37% on moderately heavy volume, while GDXJ edged down -0.16% on moderate volume. XAU forecaster dropped -0.20 to -0.45; the failed rally in the miners didn’t look all that great on the chart. 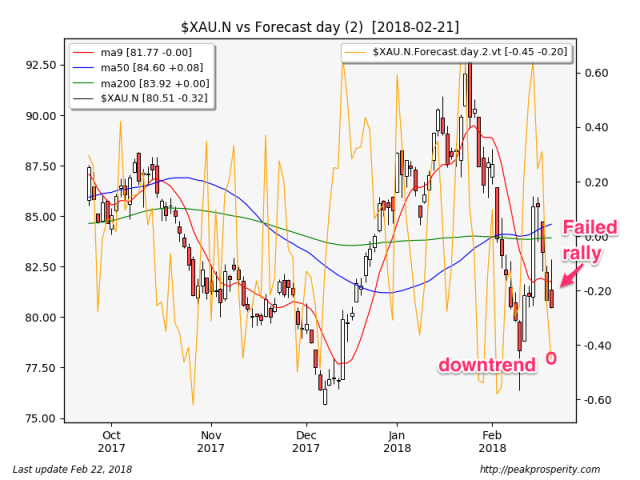 Platinum fell -0.97%, palladium dropped -0.93%, while copper rose +0.47%. Both copper and platinum remain in downtrends, while palladium (which printed a relatively weak swing high) remains in an uptrend.

The buck fell after the FOMC minutes release at 2 pm, but then rebounded strongly 20-30 minutes later, ending the day up +0.27 [+0.30%] to 89.67.  Not surprisingly, it was the mirror image of what the Euro, gold, silver, and pretty much everything else did today.  The long white candle was a bullish continuation, and DX forecaster jumped +0.27 to +0.03, which is a buy signal for the dollar. A close above 90.25 will confirm the double bottom pattern currently being formed. If it manages to do this, that would be bullish for the dollar – and bearish for PM.  The double-bottom pattern for the buck mirrors the double-top pattern forming in gold. 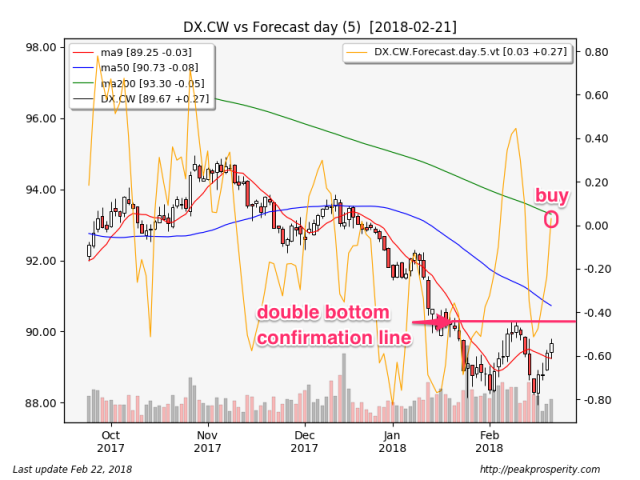 SPX rallied early in the day, and then at 2 pm had much the same pattern as everything else: rising after the FOMC announcement, only to start selling off 20 minutes later.  Peak-to-trough, the fall from the highs was 50 points, but overall SPX closed down -14.93 [-0.55%] to 2701.33. Candle print was a spinning top/bearish continuation, and the forecaster plunged -0.47 to +0.02, right on the edge of a sell signal for SPX. Energy led lower (XLE:-1.68%) along with utilities (XLU:-1.31%) with financials doing best (XLF:+0.14%).  While crude remains relatively strong, energy equities are not doing well.

TLT plunged -1.23%; it fell for much of the day, rallied only slightly after FOMC, and continued to plunge 20 minutes later along with most everything else.  TLT forecaster issuing a sell signal on the drop. TY dropped too, losing -0.32%, making a new low. TY remains in a downtrend. 10-year rates rose +6bp to 2.94, which is a new high.

CRB rose +0.26%; it is actually doing fairly well given the rebound in the buck. 4 of 5 sectors rose, led by industrial metals (+0.36%). CRB remains above both the 50 and 200 MA. Normally a dollar rally would not be kind to CRB, but perhaps it is the inflation talk keeping things afloat in the commodity index.

The one fairly constant effect these days is a move higher in interest rates. As I have said, this has a generally negative effect on equities – at least that’s what my correlations show.  With the 10-year at 2.94, we are approaching the 3% line-o-death that traders are focused on.  I see 2 possible patterns: either the 10-year just blows clean through 3% and screams higher, or it hits 3%, backs off, and then breaks out.  I don’t think it will just hit 3% and reverse, given the macroeconomic environment in bonds.  I like pattern #2 best, because that will hose the largest number of traders. 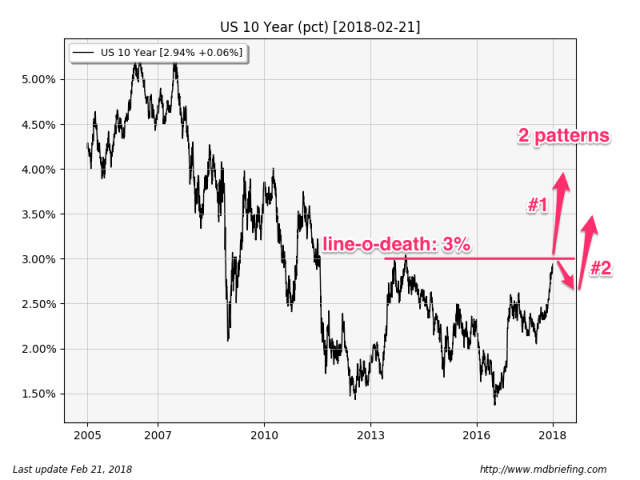 Today’s dollar rally wasn’t as hard on the metals – or the miners – as it was yesterday, probably because of the inflation-flavored FOMC minutes, which were at least somewhat positive for commodities. Perhaps that’s one explanation as to why silver outperformed gold. It might also explain why the commercials are long silver.

My question is, can commodities and PM do well in a rising-dollar environment?  I ask that because that’s where it seems like we are headed.  Perhaps the Italian election (10 more days!) has something to do with that as well.  Silver’s recent performance provides a little optimism in that regard, as does the silver COT report, but ultimately we’ll just have to see how prices react.