Gold rose +5.80 to 1217.50 on moderate volume, and silver fell -0.05 to 17.48 on moderately heavy volume. The dollar initially continued falling, but then reversed back into the green; this clipped gold’s rally, and dragged silver into the red.

Gold made a new high today to 1227.50, but the rally stalled out when the buck made its low, and as the dollar steadily rebounded, gold moved lower into the close. Candle print for gold today was a spinning top, but it looked a lot like a bearish shooting star. The candle code assigns a 33% bearish rating, which is somewhat unpleasant for a shooting star. Gold appears to remain at the mercy of the dollar – although to less of a degree than silver.

Open interest at COMEX for GC rose by +8,173 contracts. 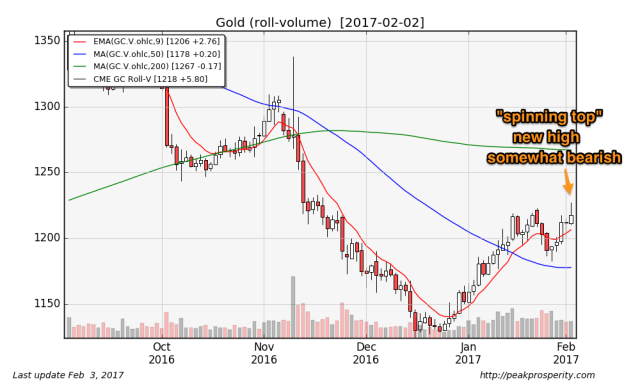 Silver also made a new high, to 17.74, but the rebounding dollar took its toll even more heavily on silver than on gold. Candle print for silver was a bearish shooting star, which the candle code assigns a rating of 29% bearish. That’s not all that bad. The gold/silver ratio rose by +0.55 to 69.63. That’s somewhat bearish. 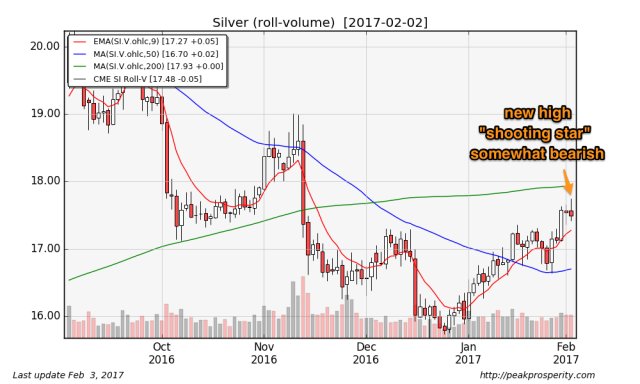 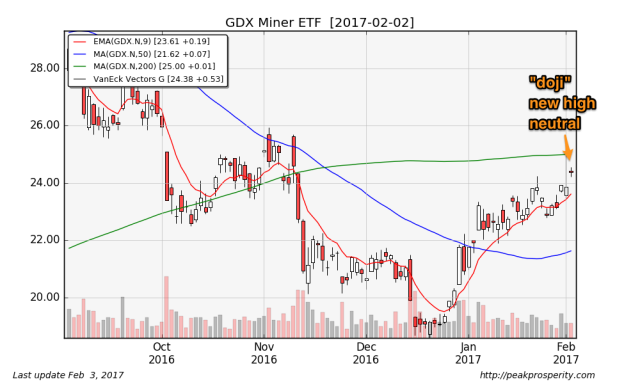 USD made a new low to 99.14 but then rebounded, eventually closing up +0.17 to 99.74. The rebound was a steady thing, not some large spike because of an economic report or event. Candle print was a spinning top, which turned out to be relatively bullish: 39% chance of a low here. I’m not sure the other currencies are ready to drop just yet, although the Euro’s momentum is starting to fade a bit.  Buck really needs a close above that 9 EMA to signal a reversal. 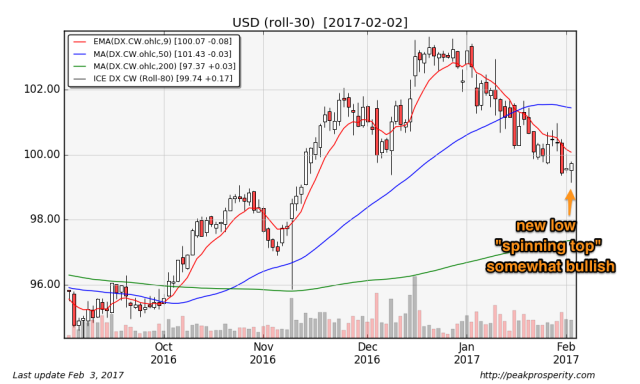 Crude rose +0.12 to 53.67. Crude attempted to rally through 54 today, but only succeeded momentarily. Candle print is a doji – actually a bearish doji star – which the code assigns a 21% chance of marking a top. Crude remains above its 9 EMA and in an uptrend. It really needs that close above 54 before it can move higher, but the wall of selling that hits every time crude attempts to rise above 54 has proven too much for the longs, at least to date.

TLT opened up maybe 0.90%, but fell for most of the day, ending down -0.04%. TLT continues to struggle to find buyers, and remains below all 3 moving averages.

JNK fell for the 4th straight day, dropping -0.05%; the moves down have been relatively minor, but have been enough to pull JNK below its 9 EMA. It is not a major sign of risk off just yet, just a hint. In recent months, drops such as this have ended up just as dips that are then bought.

PM still looks ok; miners are doing well, even though silver is lagging just a bit.  A swing low in the buck would probably throw a wrench into that motor, however.  We have Nonfarm Payrolls coming up at 08:30, and that’s usually just as impactful on prices as are the FOMC announcements.  I’m not exactly sure what the payrolls report will end up doing, however; a bullish payrolls report may just be interpreted by the market that more inflation is on the way, which would be gold-positive.

Last note: Armstrong has a weekly bullish reversal at 1221; that says a close tomorrow above 1221 could see a more extensive rally – I remember him saying it could be as much as $100.  If the buck continues lower, that would seem to be a relatively likely prospect.

Clear as mud.  We'll have to see what Armstrong actually writes.

He'll probably use the lower one.  Wouldn't it be nice if he said, "yeah, that's close enough!"?