Initially, gold, silver, equities – many things – sold off hard right at 8:30 on the dot; for example, gold plunged $10 in about a minute, and the e-mini futures (SPX) dropped literally 50 points during that same time period. However, that initial move proved to be just a big headfake. Buyers soon appeared, and price started to recover – first slowly, and then more rapidly and as price broke above the initial breakdown points the buying in the metals just became relentless.

So what did the reports say that caused so much fuss?

So my guess is, the initial spike down was caused by the usually-more-important (and weak) retail sales numbers – which the big guys triggered off of – with the snap-back rally driven by the surprisingly hot inflation.  It just took the human traders a little while to figure out that the hot CPI was probably more important.

After the initial spike down at 8:30 am, gold rallied strongly for the remainder of the day.  Gold’s candle print for gold was just a long white candle – a bullish continuation. Forecaster moved up +0.19 to +0.51, which is a strong uptrend. Gold has now erased almost all its losses from the recent downtrend. Gold’s performance today was very strong.  The “line in the sand” (2016 previous high) for gold stands at 1377.50, while the more recent previous high is 1365.  Both price levels are not particularly far away.

COMEX GC open interest shot up by 18,667 contracts.  Commercials leaned heavily on the gold market today; this was 58 tons of new paper gold – in context, that’s 8 days of real-gold production, and a 3.5% increase in open interest.  Might gold have broken out if they hadn’t done this?  It sure might have. 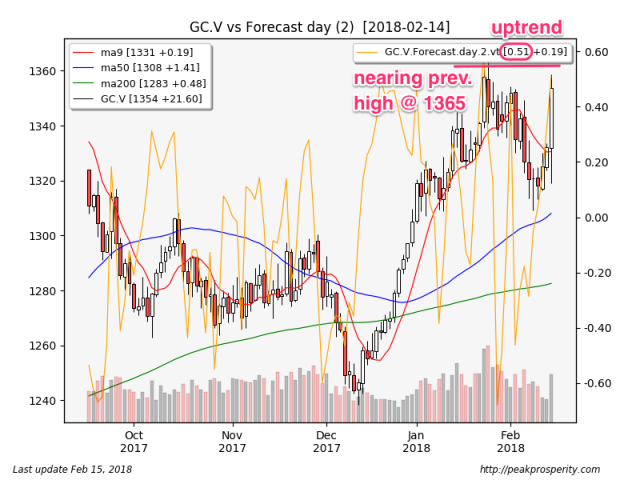 Candle print for silver was also a long white candle, which was a bullish continuation. Silver forecaster moved up +0.08 to +0.22, which wasn’t much of an improvement in forecast. The forecaster has probably noticed silver’s continuing under-performance, and that’s why it isn’t as enthusiastic for silver as it is for gold. Even so, silver managed to move through both the 9 and 50 MA lines, with its rally stopping just under the 200 MA.  Silver has retraced only about half of its recent losses.

COMEX SI open interest rose 4,025 contracts today, or 626 tons of paper silver – it is also 8 days of production, and a 2% increase in total OI. 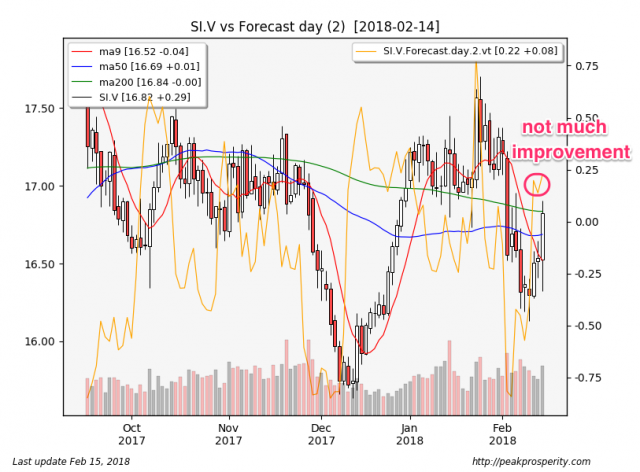 Miners just went nuts, with GDX up +4.59% on extremely heavy volume, while GDXJ climbed +4.63% also on extremely heavy volume. Both ETFs printed strong line candles, which are bullish continuations. XAU forecaster moved up +0.17 to +0.67, which is a strong uptrend.  Yesterday I opined that it was either a day of rest, or a precursor to a reversal. It seemed as though the miners were just waiting for that CPI report to come out.  Was the rally caused by buying, or short covering?  Maybe it was a fair amount of both.  Certainly the relentless nature of the move looked like shorts bailing out to me. 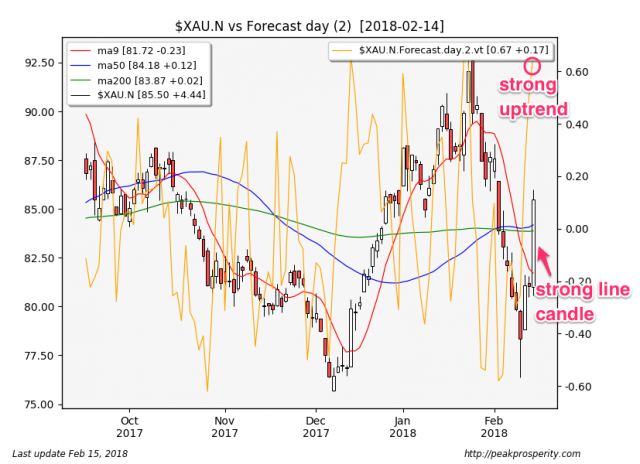 Platinum shot up +2.30%, palladium climbed +1.67%, and copper rallied +2.23%. All 3 other metals are back in uptrends and copper is doing especially well – it is back above its previous breakdown point. Palladium actually looks weakest. Platinum appears to be outperforming silver, but underperforming gold – at least eyeballing the chart anyway. The strong moves in the other metals supports the “inflation” thesis.

The dollar initially rallied at 8:30, but then flipped direction and sold off, ultimately ending down -0.59 [-0.66%] to 88.80. My guess is that the initial rally was due to the SPX sell-off/weak retail sales, and the reversal was driven by the belated recognition that the hot CPI report was probably more important. DX forecaster issued a sell signal today, dropping -0.45 to -0.36. The buck appears to be headed for a retest of the previous low at 88.13.

What is driving the currencies? Here’s the multi-handed economist approach. Draghi is under pressure to reduce the money printing, given how swimmingly the economy in Europe is doing right now. So that’s Euro-positive and peripheral-country sovereign bond negative. Bond prices have already been moving in advance of this expected change.  Then there’s the Italian elections, which is Euro negative. We’ll call it even, at least for now.

For the buck, there’s the recently-passed “everyone gets everything” budget, which was good for an annual 200 billion increase in the deficit, and the tax cut, which was good for another 200 billion, and there’s the Fed balance sheet normalization, which will be good for roughly 300 billion. That’s on top of the current deficit of 660 billion.  This adds up to perhaps 1.4 trillion in new treasury supply for 2018. That’s dollar-negative – most dollars are parked in bonds, and with this wall of bond-supply about to hit, why on earth would you want to own them?  Supply increases -> prices drop -> your dollar holdings decline in value.

And given inflation is heating up now…and deficit spending is always inflationary (it is the most effective sort of money printing, since it is spent directly into the economy), it is really a “run, don’t walk” situation away from Treasury bonds and “things with a yield”, at least that have a US$ attached to it. So my read is, the CPI will become increasingly more closely watched, and we’ll probably see prices jump every time it comes in hot.

Here’s the chart for the buck: 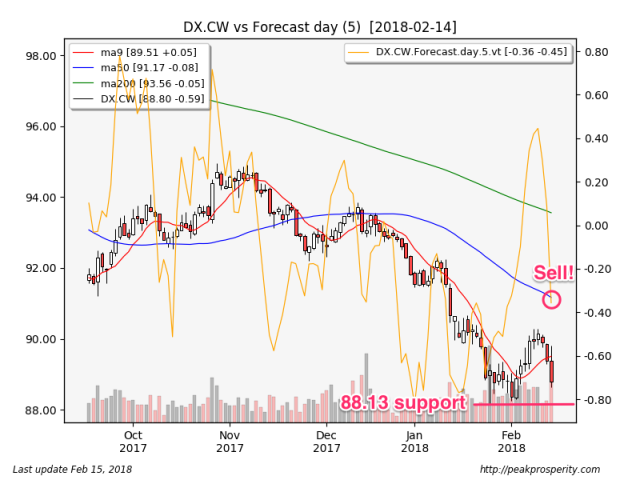 Crude shot up +1.80 [+3.06%] to 60.65. Crude sold off initially, but rebounded after the CPI report, and moved up even more rapidly following the EIA release which really didn’t look all that bullish to me [crude +1.8m, gasoline +3.6m, distillates -0.5m] but it was an improvement over yesterday’s API numbers. Crude seemed to get caught up in the overall commodity rally frenzy, closing right near the day highs. This is a swing low for crude, and a strong follow-through off yesterday’s crazy-but-correct buy signal from the forecaster, which jumped +0.45 to +0.59. It looks as though the rough support level at 57.50 held. 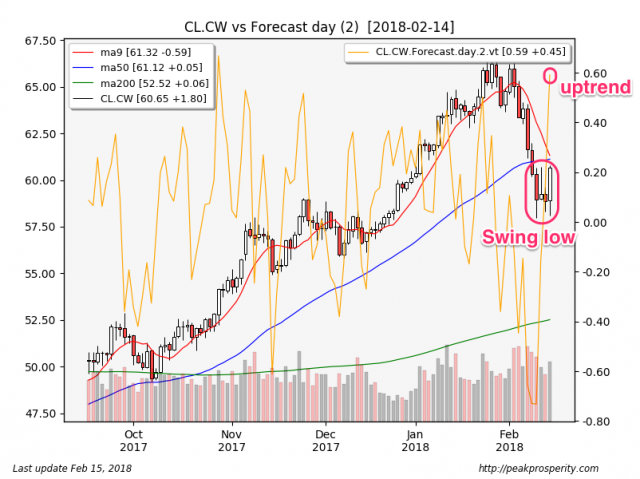 TLT fell -1.11%, making a new low, causing the forecaster to issue a sell signal for TLT. TY concurred, dropping -0.58%, also making a new low. TY forecaster also issued a sell signal, plunging -0.72 to -0.55. That’s pretty ugly. Bonds do not like inflation, and the longer the duration, the more the price will fall. The 10-year yield ended the day at 2.91%.

Today’s CPI report seemed to remind everyone (including me) of just how much “real money printing” we’re about to see, courtesy of the “deficit-conscious Republicans” who preach fiscal rectitude and pinch pennies when they are out of power, and then turn around and spend like drunken sailors when they are at the helm.

People imagine that gold is an inflation hedge – this is only sometimes true. Gold is both a commodity and a currency, and with the dollar plunging, and commodities moving strongly higher once more, that’s the setup for gold to do quite well. And the miners are just a multiplier on gold.

I really need to sit on my hands every time I think about buying a bond.