Gold rallied in Asia, fell in London, and then rallied strongly during the US session, closing at the highs. The closing white marubozu candle was a bullish continuation, forecaster climbed, moving higher into its uptrend. Gold is in an uptrend in all three timeframes.

Gold/euros climbed +7.60 [+0.49%] to 1547.35 on moderately light volume. The closing white marubozu candle was a low-percentage bearish reversal (24%), forecaster climbed, rising into an uptrend. Gold/euros is in an uptrend in all three timeframes.

Gold looked strong today, making a new 2-month closing high. It has yet to break out, and if you look at the gold/Euros chart, you can really get a sense that gold continues to struggle, and that most of gold’s USD rally is about the plunge in the buck. I’ll give you both charts today to show you what I mean. 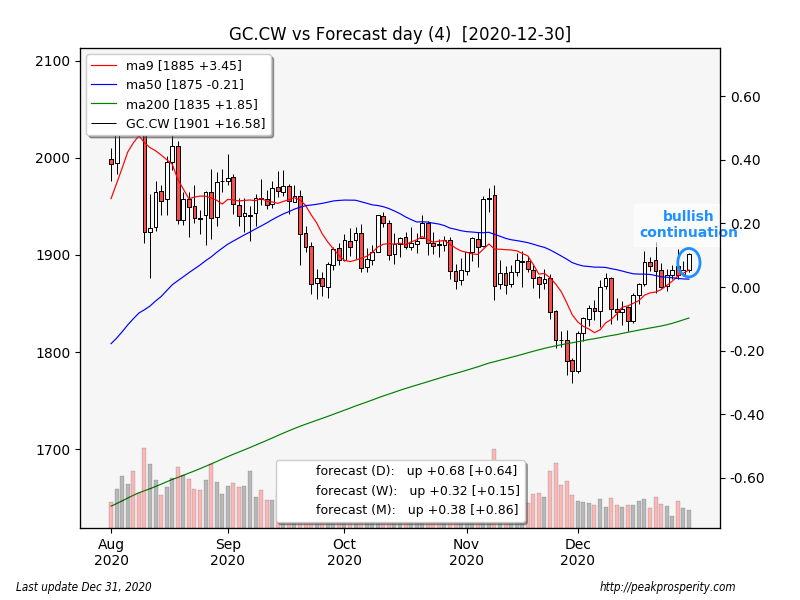 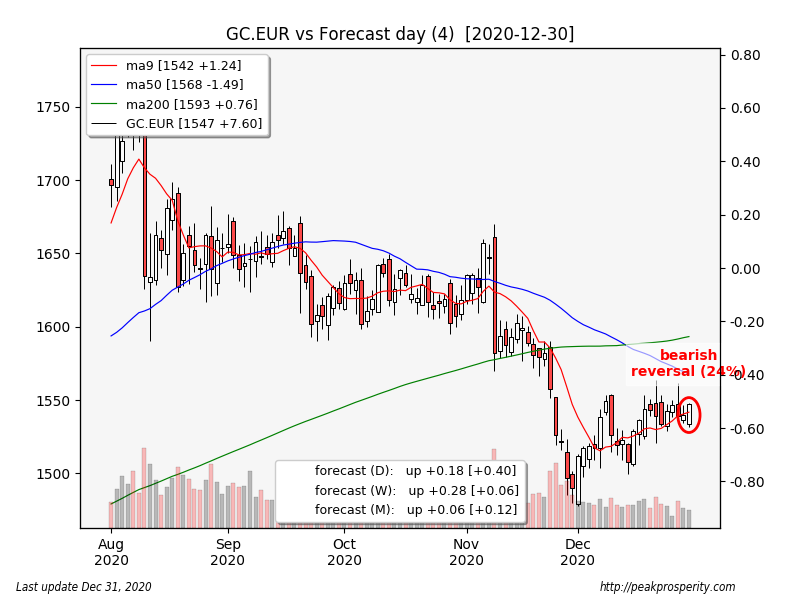 Intraday, silver looked a lot like gold, rallying in Asia, and then again during the US session, closing at the highs. The white marubozu candle was a bullish continuation, forecaster climbed, rising into an uptrend. Silver is in an uptrend in all three timeframes.

There was some shorting today, but ultimately silver made a new 3-month closing high. Silver continues to look stronger than gold, and the forecaster trend strength readings are also generally more positive. 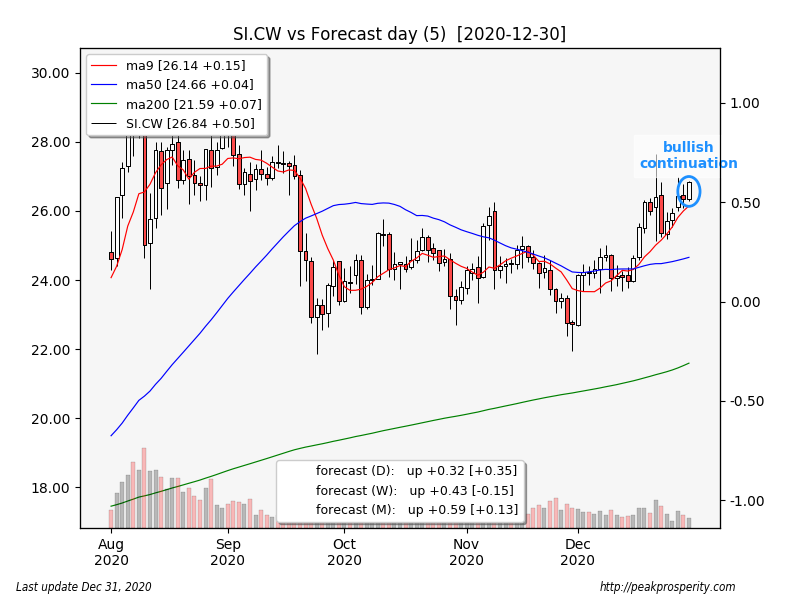 Miners opened slightly higher, rallied early, fell, then rallied through end of day, closing at the highs. GDX rallied +2.29% on moderately light volume, and GDXJ shot up +3.38% on moderate volume. XAU rose +3.29%, the confirmed bullish spinning top (and white marubozu) candle was a reasonably strong bullish reversal (40%), forecaster climbed, moving higher into its uptrend. XAU is in an uptrend in the daily and weekly timeframes.

The miners looked good today. Today saw just a one-week closing high however, and the trend strength numbers don’t look as good for the miners as they do for silver and gold. The ETFs look weaker – GDX looks as though it is days away from a MA50/MA200 crossing, but in the wrong direction – a.k.a. the “death cross”. Those of us expecting the miners to explode higher given all the printing and fuss have been mostly disappointed – at least since the highs in August. 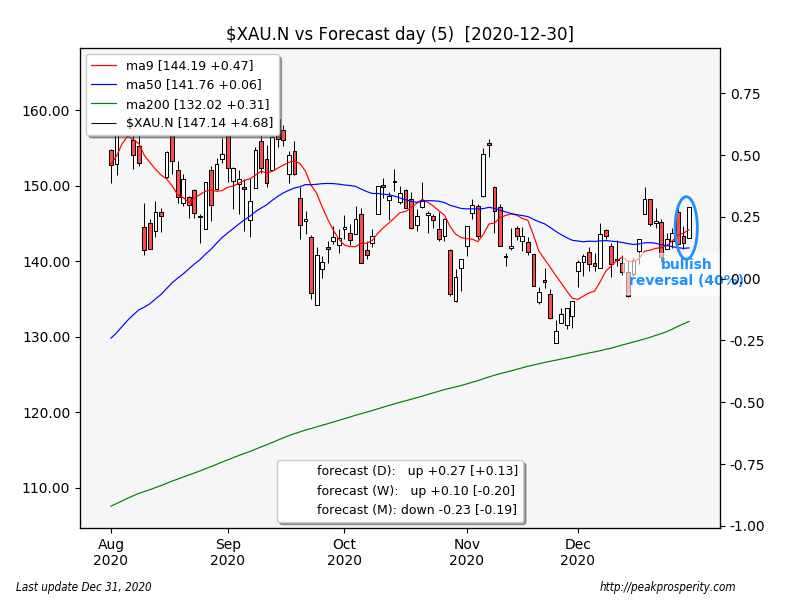 Copper was unchanged today at 3.54 on moderately light volume. The spinning top candle was a bearish continuation, forecaster climbed, moving into a state of no-trend. Copper is in an uptrend in the monthly timeframe.

Copper tried to rally twice today but failed each time, closing near the lows. Copper may really be in the process of putting in a top in the near term – but looking at the monthly chart, copper still appears strong. 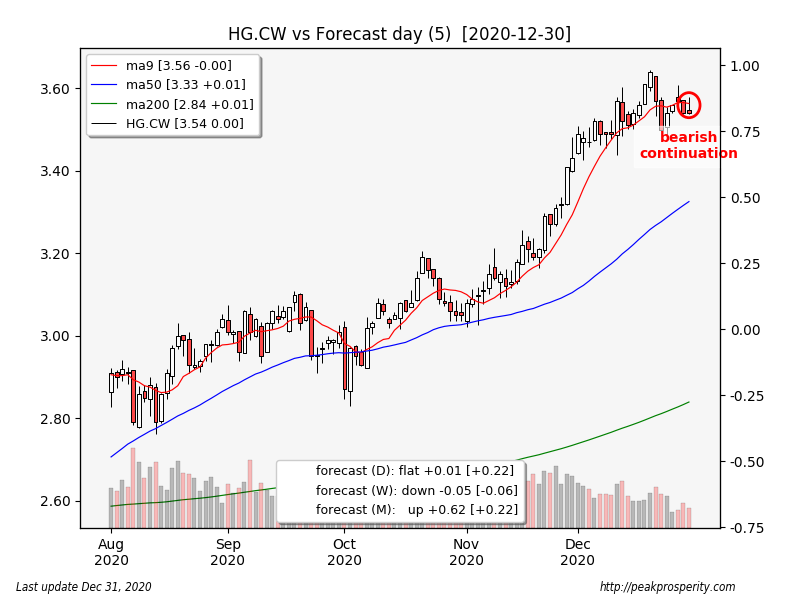 The buck fell -0.27 [-0.30%] to 89.64 on moderate volume. The opening black marubozu candle was a possible bullish reversal (38%), forecaster dropped, moving deeper into its downtrend. The buck is in a downtrend in all three timeframes.

While it was a strong candle print, it was also a new 3-year low for the buck. Money is fleeing the US. 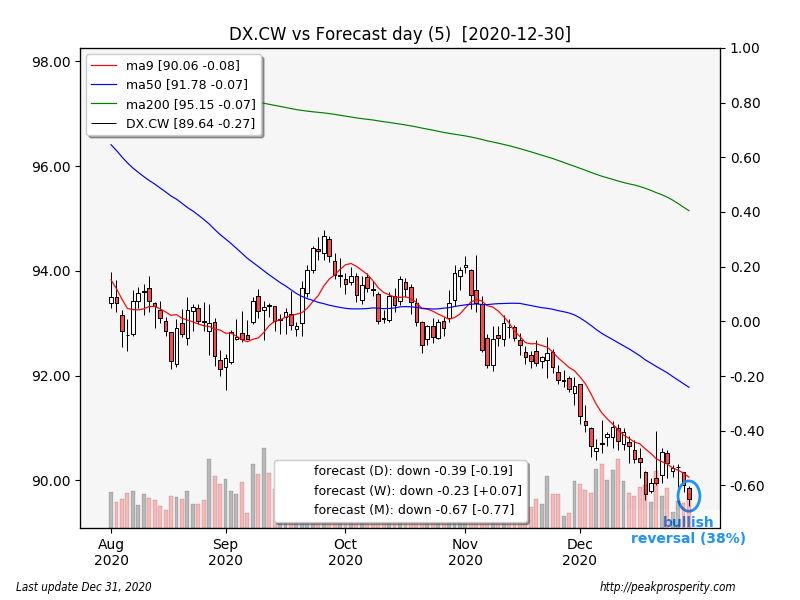 Crude moved up +0.22 [+0.46%] to 48.35 on moderately light volume. The spinning top candle was a possible bearish reversal (39%), forecaster climbed, moving higher into its uptrend. Crude is in an uptrend in all three timeframes.

Crude moved slowly higher in Asia and London, then chopped sideways for the rest of the day. Crude did manage to close back above its 9 MA, which is a positive sign, but the candle print was fairly bearish. Even a strong EIA report wasn’t enough to keep prices moving higher. Like copper, crude may be putting in a lower high. 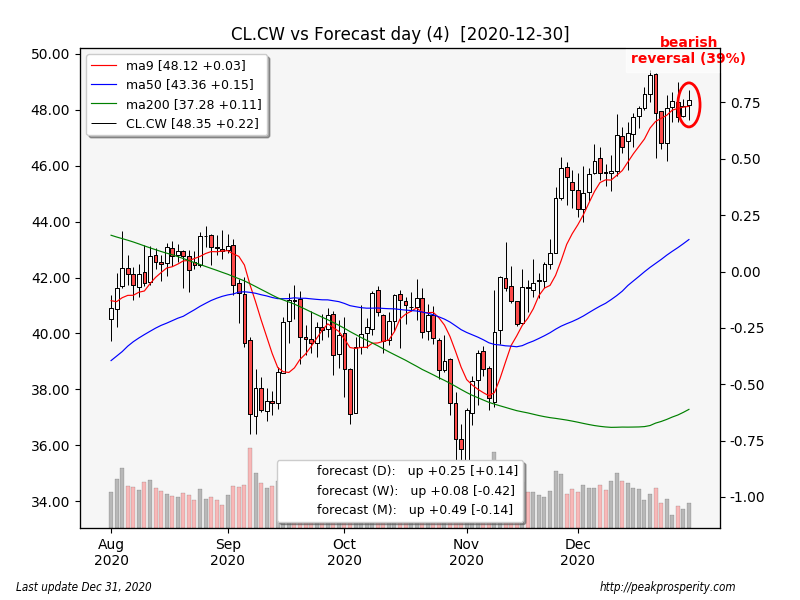 SPX inched up +5.00 [+0.13%] to 3732.04 on moderately light volume. The spinning top candle was unrated, forecaster dropped, dropping into a downtrend. SPX is in an uptrend in the weekly and monthly timeframes.

SPX rallied in the futures markets overnight, then sold off (for the most part)) during the trading day. Trading range was very narrow. The forecaster wasn’t happy with today’s price action – it sees SPX moving back into a downtrend. 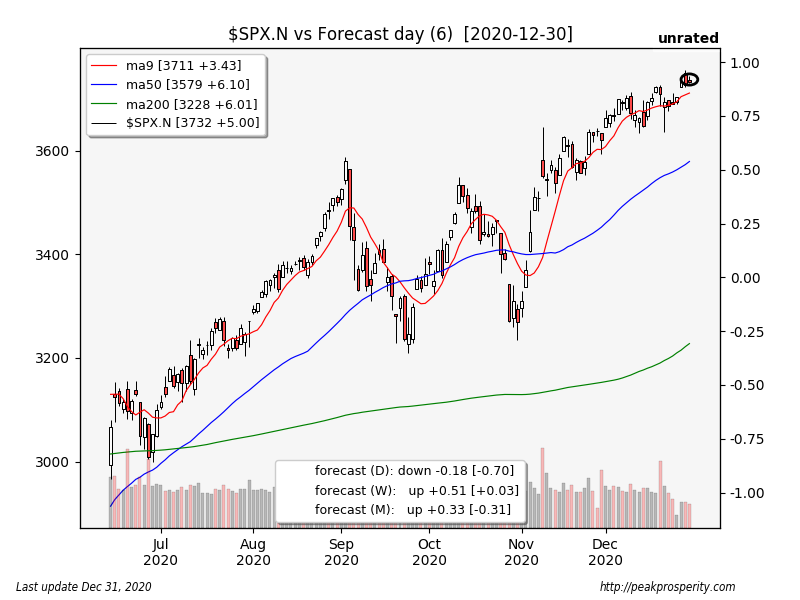 TLT climbed +0.22%. The closing white marubozu candle was a bullish continuation, forecaster climbed, moving higher into its uptrend. TLT is in an uptrend in the daily and weekly timeframes. The 30-Year yield fell -1.0 bp to +1.66%.

TY inched up +0.02%. The short white candle was a possible bullish reversal (35%), forecaster climbed, moving higher into its uptrend. TY is in an uptrend in the daily and weekly timeframes. The 10-Year yield fell -2.0 bp to +0.92%.

Bonds continue to look at least neutral – TLT was actually able to crawl back above its 9 MA. 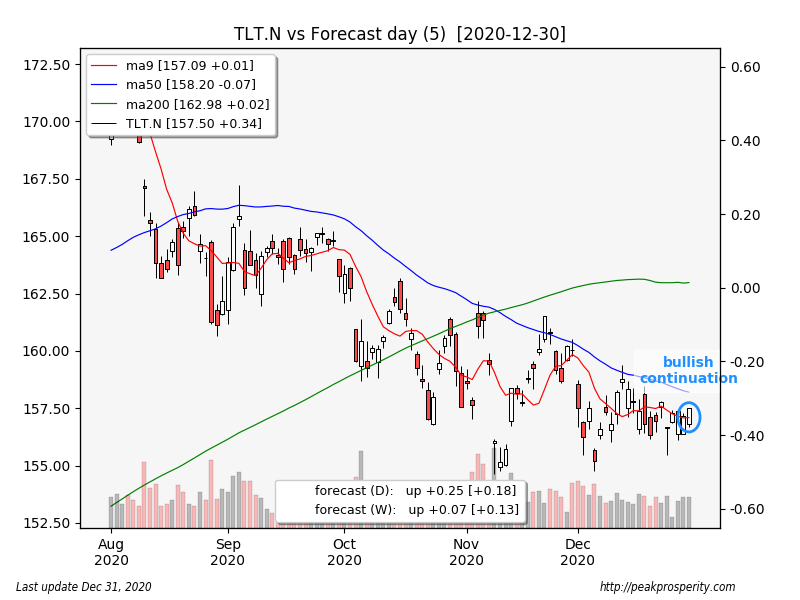 JNK climbed +0.18%. The short white candle was a low-percentage bearish reversal (22%), forecaster climbed, moving higher into its uptrend. JNK is in an uptrend in the daily and weekly timeframes.

Well that’s another new 10-month high for crappy debt. It is almost back to its pre-pandemic levels. Perhaps this is about the Donor Class Stimulus Bill – someone is getting bailed out, and generally speaking, they are the shareholders and the bondholders. The owners of JNK have been made almost entirely whole at this point, and received more than a 5% dividend in the meantime. Nice work, if you can get it.

But only $600 for you and me. If only there was some way we could express our disapproval. 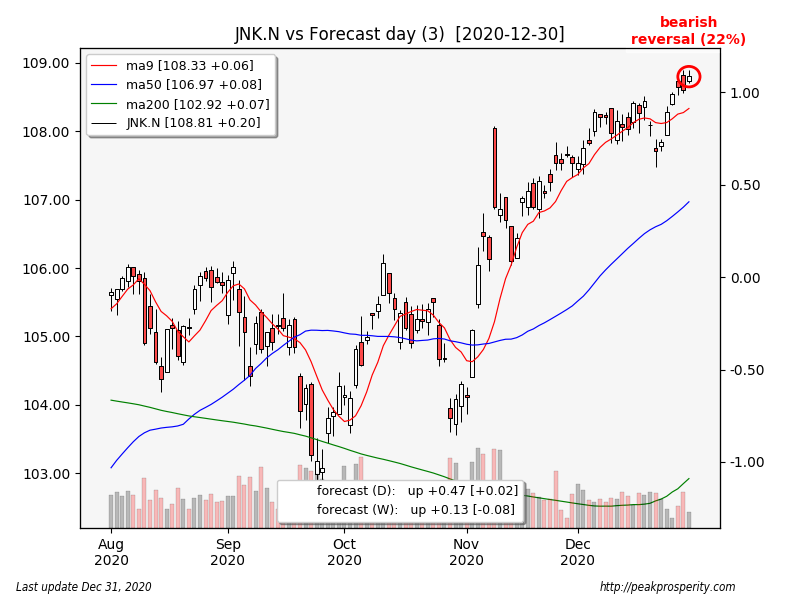 The GLD ETF tonnage on hand was unchanged at +0.00 tons, with 1170 tons remaining in inventory.

The buck made a new 3-year low today. Money continue to flee US assets. The ongoing plunge in the buck is making gold/USD look substantially better – gold/Euros doesn’t look nearly as strong.

Bonds moved higher too. How can this happen with money fleeing the buck? I’m guessing that’s about Fed buying, but we can’t really know given no realtime access to the data. Unlike the banksters, who know exactly what is going on.

That’s it for today – we only have one more trading day left in 2020. I’ll do the annual report tomorrow. Can you believe New Years Eve day isn’t a holiday? It sure should be! Will anyone be on the trading desks? Probably just the junior traders, with orders to “do nothing risky.”

Related: do they even have trading desks anymore? Or are all the traders working from home, living in Income Tax Free Florida?

I am enjoying to read the post. This post helped me very much. It has a lot of knowledge.