Futures are predicting a 6% chance of a rate increase at the Fed’s next meeting in January 2020. 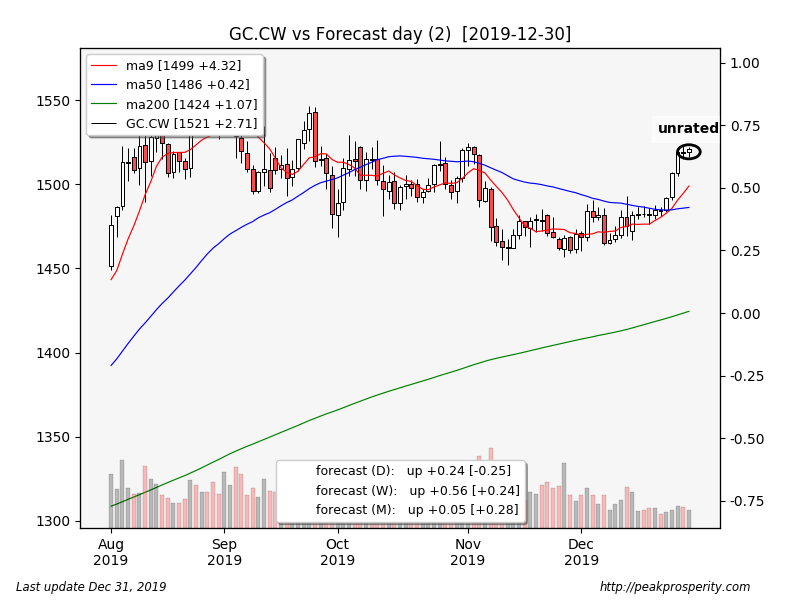 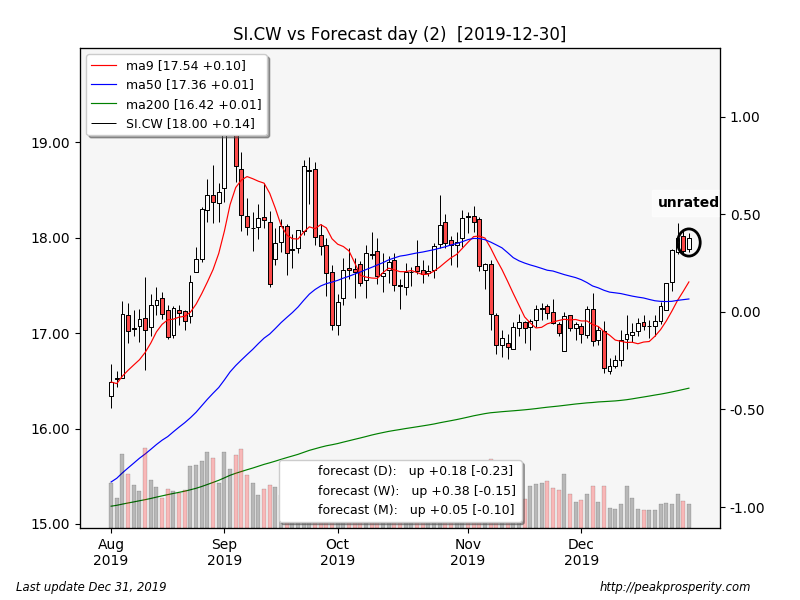 Miners shot up in the first few hours of trading, then moved sideways into the close. GDX rallied +2.15% on moderately heavy volume, and GDXJ moved up +2.39% on moderate volume. XAU climbed [+1.94%], the opening white marubozu candle was a bullish continuation, and forecaster moved higher into its uptrend. XAU remains in a very strong uptrend in all 3 timeframes. It was another 3-year high for the mining shares. 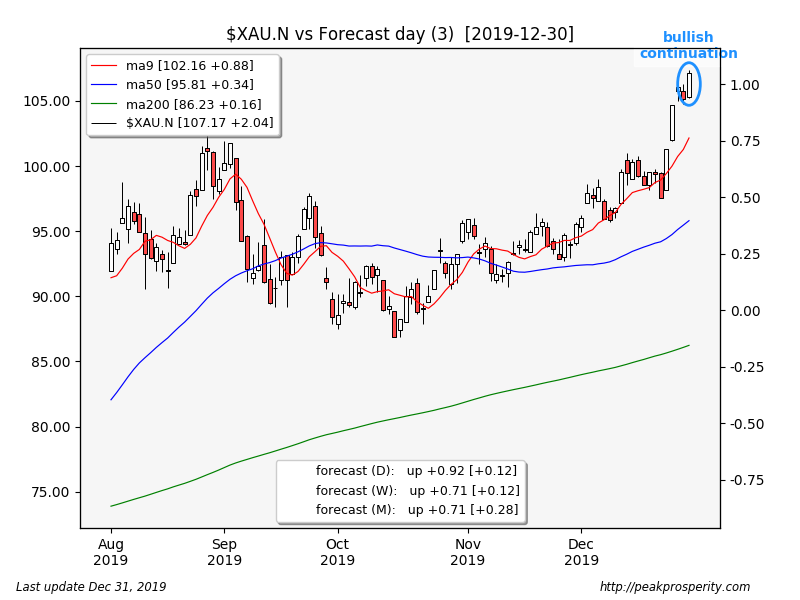 The buck dropped -0.16 [-0.17%] to 96.33 on moderately light volume. The long black candle was a bearish continuation, and forecaster inched higher, but remains in a downtrend. The buck remains in a strong downtrend in all 3 timeframes. Today marked a new 5-month closing low for the buck – the buck broke below the previous low set just a few weeks ago.

The dollar downtrend could well be caused by the Fed’s money printing spree – the buck topped out in early october. 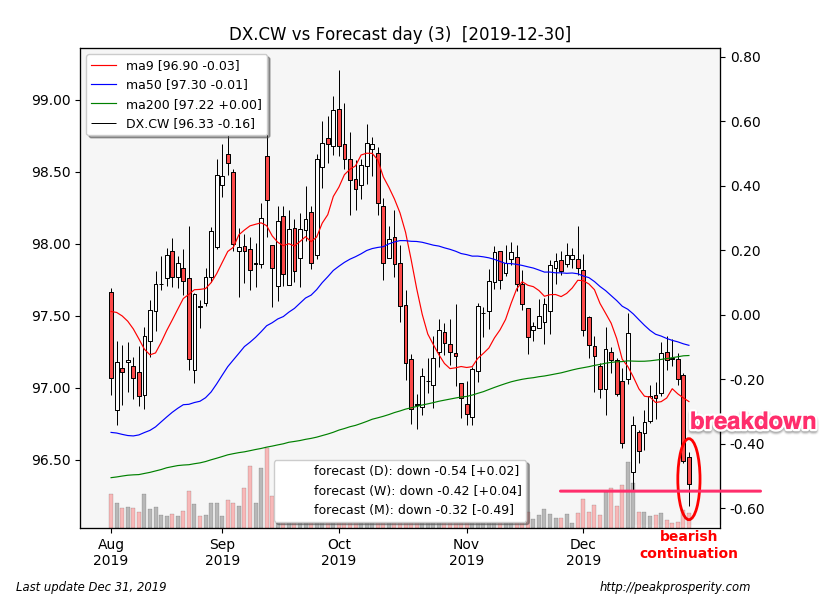 Crude fell -0.11 [-0.18%] to 61.41 on moderately light volume. Crude made a new high today but was not able to hold onto its gains. The long legged doji candle was a bullish continuation, but forecaster dropped, and remains (just barely) in an uptrend. Crude remains in an uptrend in all 3 timeframes.

SPX dropped -18.73 [-0.58%] to 3221.29 on moderately light volume. The swing high candle was a possible bearish reversal (36%), and forecaster dropped, but remains (just barely) in an uptrend. SPX remains in an uptrend in all 3 timeframes. Might this be a reversal for SPX? It could be – neither the candle code nor the forecaster were happy with today’s move. 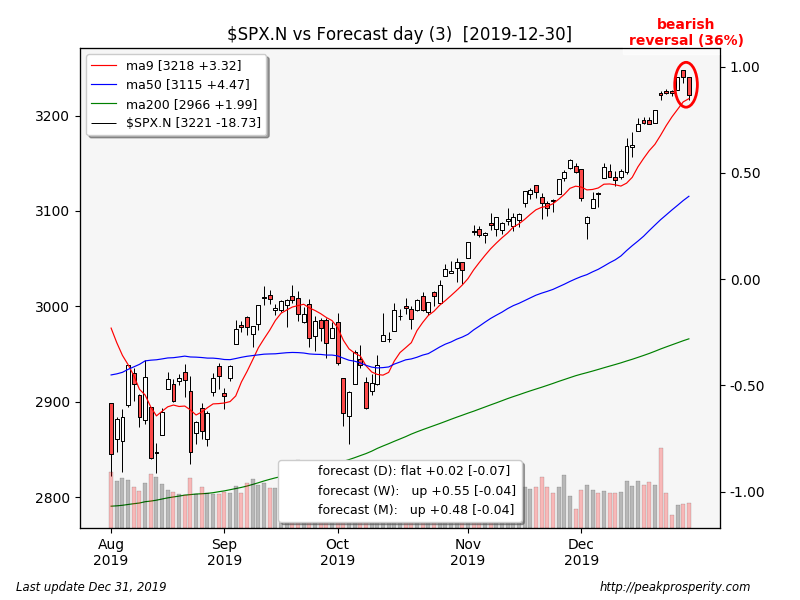 TY was virtually unchanged [-0.02%], the doji candle was a bullish continuation, and forecaster climbed, moving higher into its uptrend. 10-Year Yield rose +1.0 bp to +1.90%. TY remains in a downtrend in both weekly and monthly timeframes.

Bonds didn’t do all that well given the plunge in SPX today. This continues the recent trend; is it Fed money printing? Money fleeing the buck (possibly also due to money printing?) Maybe concerns over inflation? If SPX starts to really sell off, we will get a better sense of the demand for US treasury bonds. If they fail to rally even with an SPX sell-off, that’s bad news for the bond market.

JNK fell [-0.08%], the opening black marubozu candle was neutral, and forecaster climbed, moving higher into its uptrend. JNK remains in an uptrend in the daily, and no-trend on the weekly. BAA.AAA differential fell -1 bp to +86 bp. No worries about credit according to this indicator.

The “Santa Claus” rally is all about big money front-running the flood of cash that pours into retirement accounts (and then, automatically, into mutual funds) in early January – the so-called January Effect. The sell-off in SPX today runs counter to this yearly move.

But are we seeing something similar in gold & the miners? The miners have jumped a ridiculous 52% over the last 52 weeks, an astonishing move (especially if you are long), and this will be sure to get the attention of retail investors when they look at fund performance. “OMG I missed out. I need to buy the miners” – after they’ve already gone up. Its a theory anyway. Wall Street will be ready to sell inventory at a markup to the new retail buyers. It kinda makes you feel as though it might be a top.

I should probably do a study: “what happens in January after a fantastic performance by a given sector in the prior year.”

Then again, if this PM rally is all about some “WTF” sentiment centered around the mysterious Fed money printfest (“year end mumble foo” – never mind we’ve had repeated “year ends” now for the last decade and no printfest has been necessary) then prices could just continue to skyrocket higher.

And there is the mysterious, and constant build in gold OI. Another new all time high today. Paper is being rained on the COMEX, and yet gold continues to move higher. As the days pass, I’m ever more convinced this isn’t commercial behavior by the banksters.

What will happen when the real money returns after the holidays?