Trump suggested today that a deal with China may not be possible right now. “I have no deadline. In some ways, I think it’s better to wait until after the election with China.” Whoa. The deadline for new tariff imposition is December 15. That’s 11 days from now. Is Trump for real?

Gold edged lower in Asia, then took off and rallied strongly through the late morning, closing near the highs. The long white candle was a bullish continuation, and forecaster moved higher into its uptrend. Gold closed above its 9 MA, as well as above the high from 8 trading days ago. Gold appears to be starting to break out.  Gold weekly also moved into an uptrend after today’s rally – gold is now in an uptrend in both daily and weekly timeframes. Gold/Euros looks similar, although the trends are a bit weaker.

COMEX GC open interest jumped +29,351 contracts. Wow. That’s 13 days of global production in new paper. Gold OI is now at 87% of annual global production, up +3% from yesterday.  What would gold have done without all the new paper?

Futures continue to project a 5% chance of a rate increase in December. 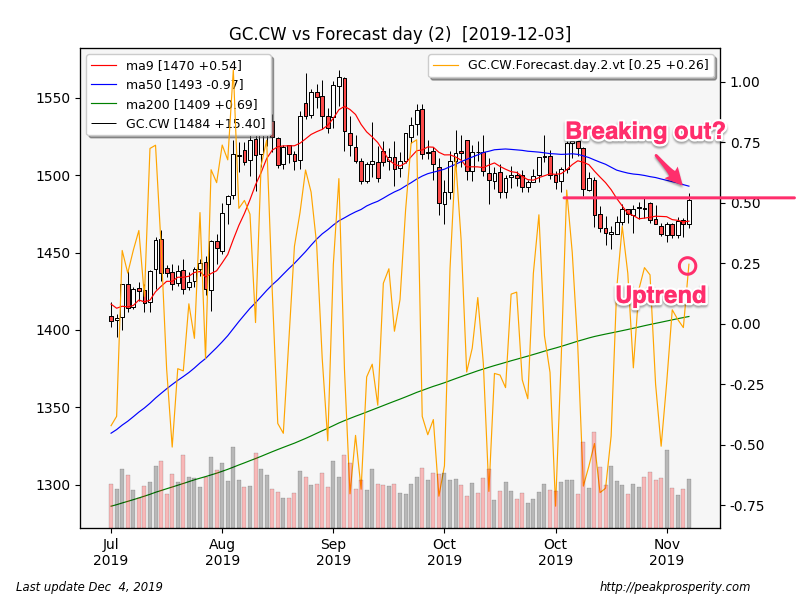 Silver looked a lot like gold, rallying strongly through late morning and closing at the highs. The bullish engulfing pattern was quite bullish (51%) and forecaster jumped into an uptrend. Silver is now in an uptrend in both daily and weekly timeframes.

Note how gold’s OI jumped by about twice the amount that silver did, from a global production standpoint. That’s unusual, and (my guess) is a sign of official intervention in the gold market. 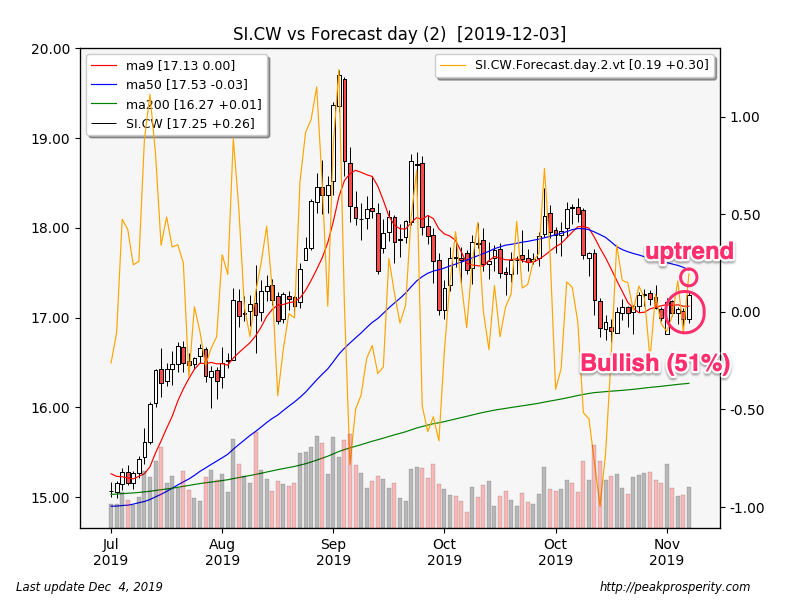 Miners gapped up at the open, spiked even higher in the morning, retreated a bit, but still managed to keep most of the gains into the close. GDX rallied +2.21% on very heavy volume, while GDXJ jumped +3.29% on very heavy volume also. XAU moved up +2.02%, the long white candle was a bullish continuation, and forecaster moved higher into what is now a strong uptrend. This was a breakout above resistance to a new 3-month high for XAU; that’s a very bullish sign. The shorts have to be running in fear at this point.  XAU remains in an uptrend in all 3 timeframes.  Have I mentioned before how well the miners have been doing? 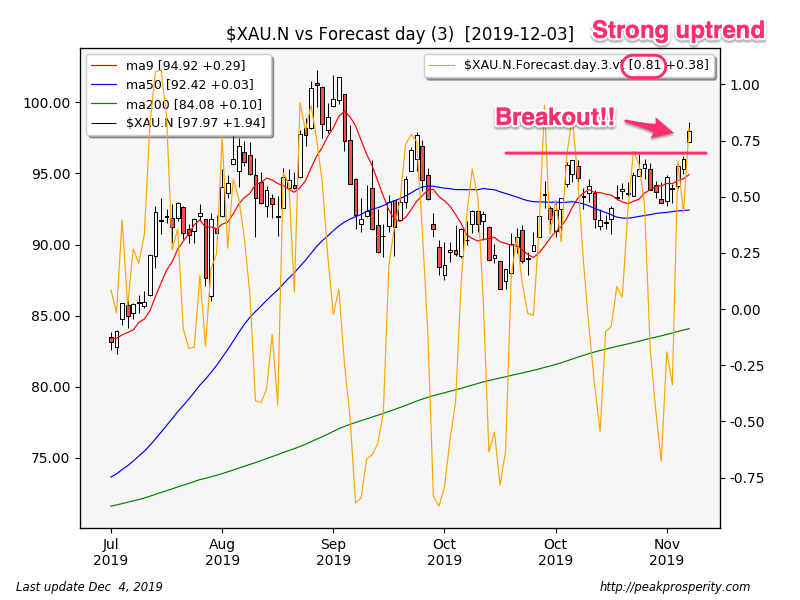 Platinum rallied +1.31%, palladium moved up +0.23%, while copper fell -0.91%. That’s another new all time high for palladium, while copper is starting to break down.

The buck fell -0.10 [-0.10%] to 97.30. The long black candle was a bearish continuation, and forecaster fell further into what is now a strong downtrend. Today was a new multi-week low for the buck, which is a bearish sign. The buck remains in a downtrend in both the daily and weekly timeframes, and that monthly uptrend is looking a bit weak.

Large currency moves include: GBP [+0.43%], AUD [+0.39%], JPY [+0.33%]. With only 8 days remaining until the UK election, Johnson and the Tories look set to win it. I believe GBP is increasingly pricing in a Tory victory, and (more importantly) a rapid resolution to BRExit in the near term.

Crude rose +0.32 [+0.57%] to 56.24. The spinning top candle was somewhat bearish (39%), and forecaster inched lower and remains in a downtrend. Crude remains in a downtrend in both daily and weekly timeframes. The bounce following Friday’s massive sell-off remains relatively feeble – that’s probably why both the candle code and the forecaster aren’t all that positive.

SPX fell -20.67 [-0.66%] to 3093.20. The long white/hammer candle was bullish (42%), but forecaster dropped hard into what is now a reasonably strong downtrend. The now-forming weekly candle, if it holds, is a fairly bearish swing high (59%). Even with these declines, however, SPX remains in an uptrend in both weekly and monthly timeframes. 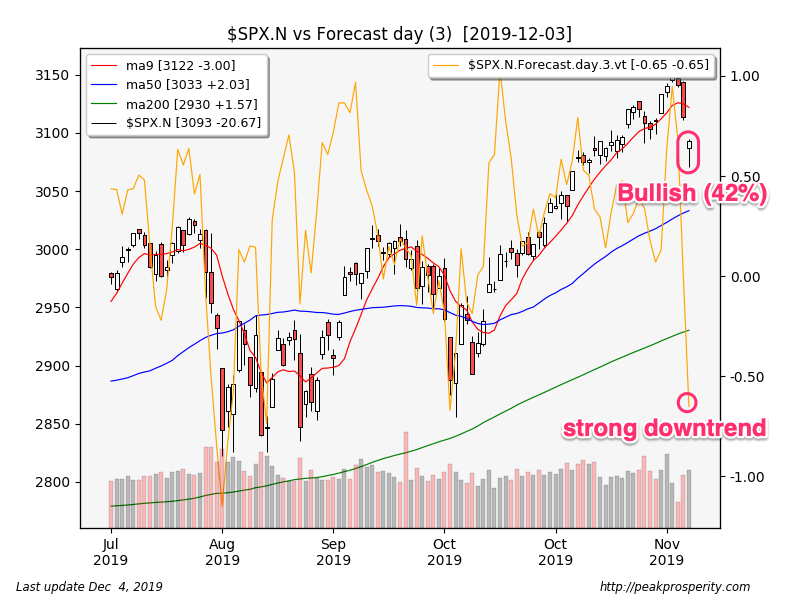 TLT screamed up +2.10%, totally erasing yesterday’s big losses and then some. The confirmed bullish spinning top candle was just mildly bullish for this normally strong pattern (40%) but forecaster shot higher and is now back in an uptrend. The 30-year yield plunged -11 bp to 2.17%, which is a 2-month low. TY rallied also, up +0.34%, the long white candle was bullish (42%), and forecaster jumped back into an uptrend. TY also re-crossed its 9 MA, which is a positive sign. The rally also pulled monthly forecaster back into an uptrend – TY is now back in an uptrend in all 3 timeframes. The 10-year yield dropped -12.7 bp to 1.71%, a one-month low.  It was a good day for bonds.

JNK fell -0.08%, the spinning top candle was mildly bullish today, but forecaster dropped hard into a downtrend. JNK made a new multi-month low, but managed to rebound by end of day – similar to SPX. The BAA.AAA differential fell -1 bp to +91 bp. No worries about credit according to this indicator.

Well it was a good day for bonds, gold and silver, and especially the mining shares, which jumped to new 5-month high on today’s “maybe after the election” US-China trade news.

Gold’s reasonably strong rally came in the face of a large dump of COMEX paper contracts; I suspect some of that were real commercial shorts, and most was official intervention. The rain of paper was just too large – almost 60% of a BRExit; contrast that paper rain with the much smaller paper drizzle that happened in silver, which tends to have a higher overall short interest than gold.

Right, so the equity market selling off on “bad trade news” isn’t too surprising. Will it continue? My guess is that money printing and share buybacks (assisted by official intervention) will keep SPX from tanking too far. Perhaps yesterday’s surprising SPX sell-off had to do with well-connected insiders getting word that Trump was leaning in this direction about the US-China trade deal. We aren’t well connected, so all we can do is guess.

So, about that trade deal. Why on earth did Trump finally say he was ok with waiting until after the election? Well normally I’d say its just Trump telling stories…but after watching pretty carefully for several months, I think Trump is being sincere about what he said.

Why would he change his views? Well I think there has been an important event that has occurred slowly over the last three months: “Impeachment” and Trump’s response to it has helped Trump to solidify his previously-iffy power base, and this will allow Trump to change the way he deals with China, and with others as well.  How did this happen?  Here is what I have seen.

Once “Impeachment” got under way, Trump started staging a number of campaign-style rallies where he filled stadiums with MAGA-hat wearing supporters. He invited the local Republicans and enveloped them in his “glow.” He staged rallies for Republican candidates in typically low-turnout off-year elections and got most of them into office – really moving the needle on the voter turnout. Why did he do this? And who did it target?

Those efforts targeted the iffy Republican Senators whom the Democrats were hoping to peel off when Impeachment landed in the Senate. The Democratic strategy was probably as follows: maybe it doesn’t matter what the actual charges were, perhaps there are 17 Republicans who could, using “Impeachment” as cover, tut-tut about the charges, and then (ever so reluctantly – publicly anyway) vote to make annoying Big Orange go away. “If only Trump had been a better person” would be their after-vote lament. It might well have worked. Perhaps Shiff and Pelosi made quiet inquiries and this was the sense they had.

But that was scheming in a vaccuum.  A popular US military maxim says: “the enemy gets a vote.”  The absence of any real substance for an Impeachment effort one year before an election has just served to enrage Trump’s base, and Trump used his rallies to visually and repeatedly demonstrate this to Washington. At the rallies – even in swing states – Trump was packing stadiums with enthusiastic MAGA-hat wearing supporters. All that enthusiasm demonstrated to those iffy Republican Senators that Trump’s base would rip any potential defectors limb from limb if they voted to ditch Trump. Not only that, Trump’s Republican supporters in the House have been getting fantastic daily press coverage (at least on Fox – which is where his base resides), and all those guys in the House are looking to climb the ladder, and so for them, Impeachment and supporting Trump has been political gold. It allows all of them to tap into Trump’s base, increase their name recognition, get clips of them asking pointed questions of “hearsay” witnesses which makes national news (at least on Fox) – a large, free campaign contribution courtesy of Adam Schiff and the Democrats. Political gold for them.

So net-net, “Impeachment” has been a win for both Trump, and for the small flock of Republicans in the House who took his side – at least with the base, which is where it counts. This scene taken three months to play out among the public, and the Senators – who certainly have not missed the implications of any of it.  It all came to a head following the Thanksgiving holiday break.

So now, Trump no longer needs the US-China trade deal to get re-elected. That’s what his new numbers are most likely telling him. So after he chews on this new situation for a few days (or hours, hard to say), we get an off-the-cuff comment: “I should probably wait until after the election to do the deal with China.”  Trump’s discipline is non-existent; he announces policy changes he’s been thinking about on his way to the helicopter.  That’s how I read it anyway.

So once the CCP figures this is not just a trick…will they make a deal? Well, I suspect any deal will now (probably) have to be a real one. Is that likely? Gun to my head, I think the answer is no. Probably. The CCP could still surprise me, but I’m guessing they are too eager to cling to their long-held advantage. Even tariffs are better than letting go of their long-term policy of IP theft and forced tech transfers.

Sorry for the long political bit, but I think this marks an important turning point, so I wanted to lay out my reasoning. I haven’t felt “Impeachment” was a market-mover to date, so I haven’t mentioned it, but after watching closely, I now believe that the blowback from a strictly political Impeachment definitely will be – it is already directly affecting the content and likelihood of the US-China trade deal. And maybe other policies as well.  Ok enough.

My gut says we remain in a gold-positive environment.

I’m less sure about SPX. Will buybacks and money printing be enough to keep the market propped up? If services start to go into recession, probably not. So the jury is still out on that one.  We will have to watch and see.