Gold moved slowly higher today – there was one interesting up-spike at 2:05 am, and another down-spike at 7:50 am, but overall the buyers won the struggle, even though the trading range was fairly narrow. That means a short white candle, which has a 35% chance of marking the top. Gold’s forecaster dropped -0.17 to +0.31. Momentum may be slowing – or it may just have been a slow day. Most of gold’s move was encouraged by the Euro rally, which rose +0.33% today. 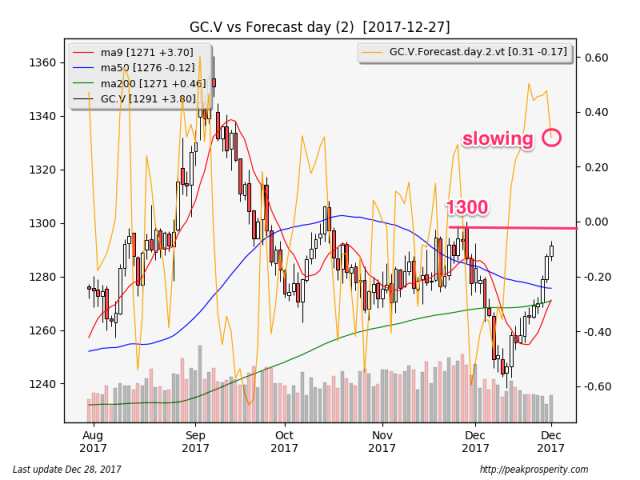 Silver outshone gold today, rising steadily after that 2:05 am up-spike. Silver’s long white candle was a bullish continuation, and the forecaster ended the day unchanged at +0.32. Silver’s uptrend remains intact. It does not seem to be suffering any ill effects from the resistance zone at 16.60.  Next stop: the 200 MA, which is just below round number 17.

The gold/silver ratio fell -0.42 to 77.10. That’s bullish. After starting out slow, silver is starting to move a bit better now. 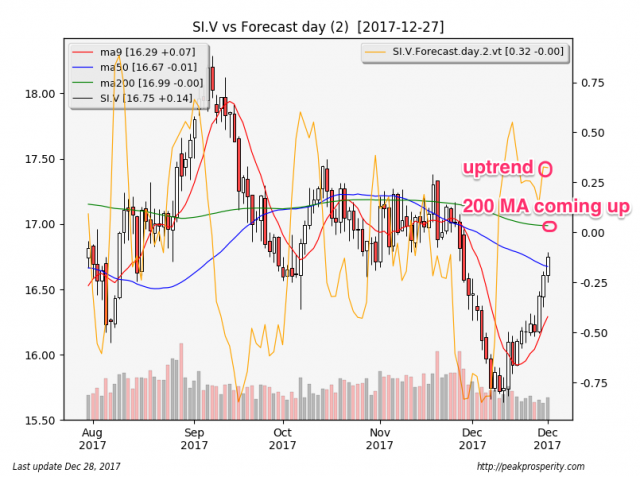 The miners encountered some selling in the morning – they’re up pretty big over the past few weeks and some traders probably felt it was time to cash in. Mostly, though the modest dip was bought. GDX fell -0.17% on moderately heavy volume, while GDXJ dropped just -0.12% on moderately heavy volume also. GDX’s opening black marubozu had a 47% chance of marking a top, while the GDXJ spinning top was only a 36% chance. The XAU forecaster wasn’t happy, dropping -0.27 to +0.13. That’s still an uptrend, but its also a warning sign. Miners have had a 13% move over the past month.  At some point, even in an longer-term uptrend, they will have to retrace. 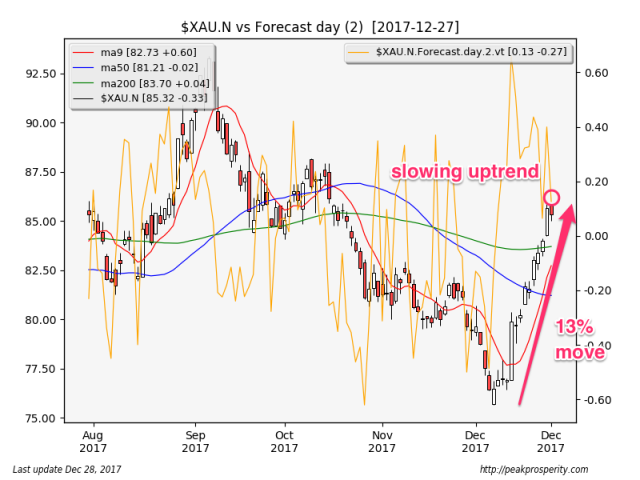 The buck fell -0.19 [-0.20%] to 92.61, which is a new low for the buck. Candle was a bearish continuation/long black candle, and the forecaster rose +0.05 to -0.59, which is still a strong downtrend. The buck isn’t falling rapidly, but the signs are all pointing lower right now.  The Euro seems to have steady upward pressure right now.  I’m not sure why anyone would buy the thing, but that’s what I see.

TLT screamed higher, up a big 1.30%, following through off yesterday’s forecaster buy signal. Forecaster rose +0.11 to +0.61. TLT has been very choppy these last few months – no rally (or downturn) lasts longer than about a week. TY did well also, up +0.35%, with its forecaster up +0.43 to +0.09. That’s a buy signal for TY. I’m a bit more inclined to believe this one, since TY is a lot more regular-acting than TLT.

CRB rose +0.52%, with 3 of 5 sectors up, led once again by industrial metals (+1.76%). CRB is now not far from its recent high. It feels like traders are positioning themselves for a commodity rally in 2018 – although I may be reading too much into a two-week move.

We are rapidly approaching end of year. Gold is within striking distance of 1300 again, and silver is moving fairly cleanly through its resistance zone. The miners took a break today, but unless we see some more serious selling pressure, uptrend remains intact. I’m going to go back to that COT report; commercials have a vested interest in rising PM prices, so the wind is at our backs right now, I think.

We’ve had a pretty good run here at end of year, but I don’t hear anyone cheering!  Could it be that you’re all shell-shocked, assuming they’ll come and snatch the football away from us one more time?

The worse you feel (and you are probably not alone), the more likely it is we had a meaningful turning point here in December.