Gold rallied in Asia alongside the Euro and then just kept going during US trading hours, making a new high to 1272.60. The move was very strong today. It wasn’t just about currency – traders just wanted to buy gold today. Ok, paper gold, but still. The spinning top candle was bullish and forecaster moved up +0.10 to +0.27. Gold’s move today took it above its 200 MA for the first time since June 2018. Gold remains in an uptrend in all 3 timeframes.

COMEX GC open interest increased +19,578 contracts. This was a very large increase: 10 days of global production in new paper. It could be that someone is trying to keep gold from really ripping higher. No doubt the move would have been stronger but for this increase in OI. 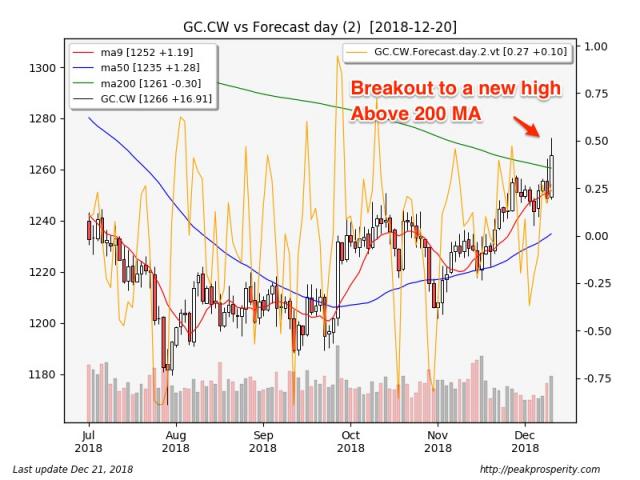 Silver’s move wasn’t nearly as strong as gold’s move, although it did manage to make a new high (by a penny) to 14.91. Silver remains within its multi-month trading range.  The long white candle was a bullish continuation, and forecaster jumped +0.26 to +0.16, which is a buy signal for silver. Silver is now in an uptrend in the daily and weekly timeframes. Silver needs that close above 15 for it to really take off. 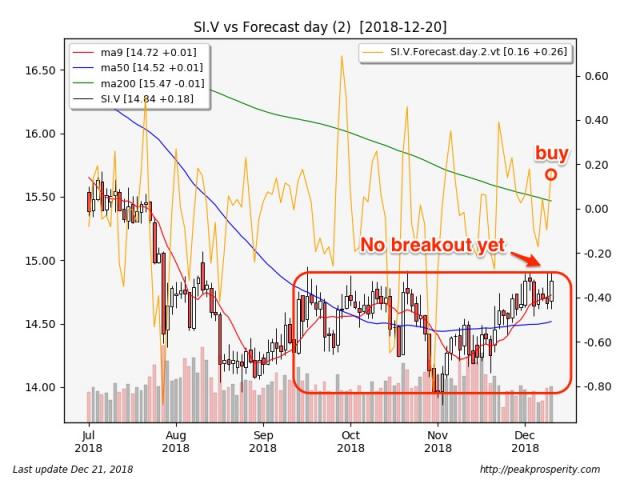 Miners recovered much of yesterday’s losses; GDX climbed +3.61% on very heavy volume, while GDXJ rose +3.74% on extremely heavy volume. XAU rose +4.77%, gapping up at the open and rallying for most of the day. The move took XAU back above its 9 MA. The bullish harami was only mildly positive, and forecaster moved up +0.08 to -0.17. XAU’s trend has not quite recovered from yesterday’s big sell-off. XAU remains in an uptrend in both the weekly and monthly timeframes. It appears that the post-FOMC panic out of the mining shares may be behind us. 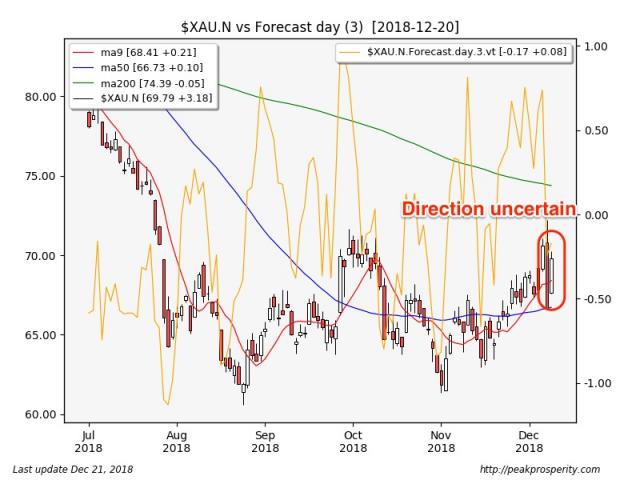 Platinum rose +1.21%, palladium dropped -0.13%, while copper rallied +1.16%. Curious, that copper rally, on a day when almost everything else sold off. Does it mean something? These days when I look at copper I think “China”. Of course, copper got the crap kicked out of it two days ago, so maybe its just the normal rebound.

The buck plunged -0.76 [-0.79%] to 95.69. This was a large move, and I am not sure what the reason was. The long black candle was a bearish continuation, forecaster moved deeper into downtrend. The move took the buck below the 50 MA for the first time in two months. The buck remains in a downtrend in all 3 timeframes.

Major moves today were: JPY [+1.05%] and EUR [+0.63%]. The JPY move was quite large, and came after a BOJ meeting where basically nothing changed, but there was a lot of talk about “more stimulus” if it became necessary. 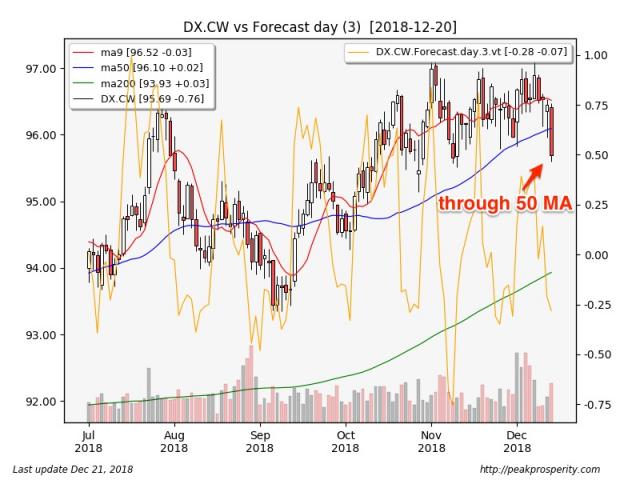 Crude fell -1.21 [-2.54%] to 46.39, making a new low to 45.84 intraday. The long black candle was a bearish continuation, and forecaster rose +0.05 to -0.28. Crude still shows no signs of reversal, at least none that my indicators show. If crude rallies tomorrow forecaster would probably issue a buy, but crude could just as easily plunge to new lows – and given the trend, which do you think is more likely?  Crude remains in a downtrend in all 3 timeframes, down $30 (40%!) over the past 3 months. 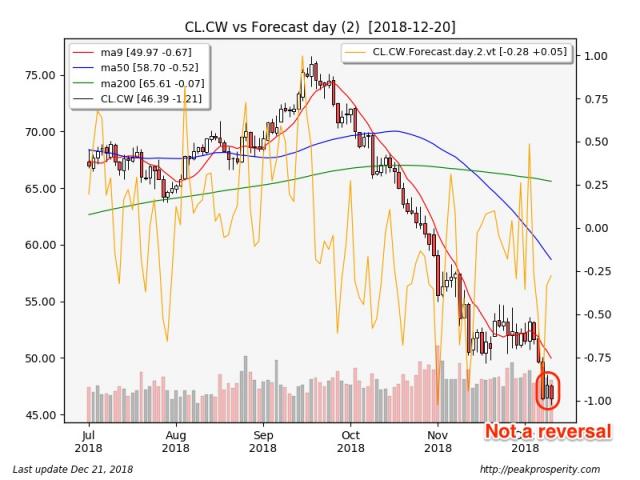 TLT fell -0.36%, moving lower in spite of the strong drop in equities. Bonds are strongly overbought right now (RSI-7 yesterday was 87), so perhaps that’s the reason for the fatigue. The bearish belt hold/dark clound cover candle print was bearish (53% reversal), and forecaster plunged -0.71 to +0.14. TY also fell, losing -0.28%, a fairly large move, however its technical indicators don’t look alarming at all.. TY remains in an uptrend in all 3 timeframes. The 10-year yield rose +1.1 bp to 2.79%. Are bonds getting tired yet? Equities were down fairly hard, but bonds sold off. Seems like the answer may be yes.

JNK was hit hard again today, dropping -1.01%, making yet another new low. Money is now starting to flee junk debt in earnest. Volume is also rising sharply. Junky debt is down about 8% from the highs set back in October. JNK continues to signal risk off.  JNK’s cousin, HYB, had a really horrible day, dropping -3.69%.  Ouch. Currently it yields 9%.  The #2 holding?  TSLA debt.

That said, BAA corporates are still attracting money; BAA rates actually fell -10 bp this week. AAA corporate yields dropped -13 bp, so the BAA.AAA ratio is climbing (and that’s a negative indicator), but the rally in BAA debt tells me that only the really junky stuff is under pressure right now. Semi-junky debt is still attracting money. This says there is no current existential crisis.  As a point of reference, back in 2008, money didn’t start panicking out of BAA debt until the beginning of September, 2008. 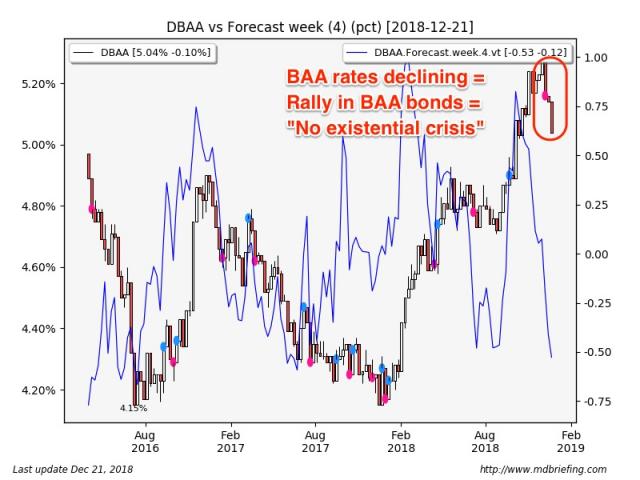 It was another bad day for equities and junk debt; no signs of a low for either one. Treasury bonds may be getting a bit tired – they are quite overbought – but if equities continue to fall, my guess is that bonds will keep moving higher as money flows from risk to safety.

And speaking of safety, you have to like the move in gold. In the face of 60 tons of paper thrown at the gold market, gold made new highs, and outperformed all the other metals today. It wasn’t all about currency either; gold in Euros also staged a decent-sized move higher. Gold is not overbought just yet; gold’s RSI-7 is only 71.

I’m also just going to note, we aren’t actually in a recession right now. The economy is doing fairly well. If you like what gold is doing now, just imagine what it will be like when things turn down for real. That said, prices don’t move in a straight line. I expect there will be some sort of risk market rally on the US-China trade settlement, and a possible letup in the safe haven mood when that happens.

Miners did well too – juniors actually outperformed seniors, which is good news. While the miners didn’t recover all of yesterday’s losses, they did fairly well. Mining shares aren’t as much of a safe haven asset as the metal itself, at least not according to what I see – but miners remain a beaten-down sector, and money fleeing other sectors is looking to rotate into a sector that is cheap and hopefully won’t decline further.

At this point, equities are fairly oversold (RSI-7=14), and with bonds perhaps getting tired again, I suspect at some point in the near future the market will reverse. I saw no signs of such a thing today, but tomorrow is “quadruple-witching” (expiration day for two sets of options, and two sets of futures), and that might bring some sort of short-term reversal to the current move. With Monday being a half-day, and Tuesday being Christmas, I’d expect any excitement to focus on tomorrow.