Gold fell -5.80 to 1133.90 on moderately light volume, while silver rose +0.12 to 16.14 on moderate volume. Gold and silver both sold off hard, driven lower by the buck hitting new highs; as soon as the buck topped out, both gold and silver reversed, with silver outperforming gold.

Although the dollar made a new high today, gold managed to avoid making a new low; this is a positive sign. On the chart, gold printed a spinning top, which was somewhat bullish: a 27% chance of being a low. Gold remains below its 9 EMA, however, and although it has been chopping sideways for the last few days, it has yet to reverse direction. Until these things change, gold remains in a downtrend. 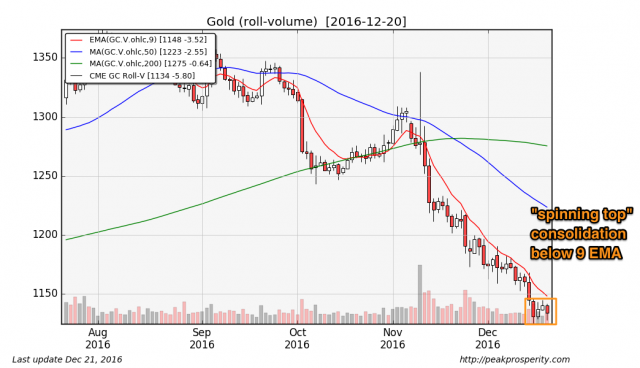 Silver sold off hard, making a new low to 15.67, only to rebound sharply back into the green by end of day. Candle print was a hammer/bullish engulfing, which the code didn’t particularly like: only a 15% chance of a low here. I would have thought it looked better than that; the hammer candle looks pretty good to me. Volume was also relatively heavy, which is always good to see in a reversal bar. Silver also outperformed gold, driving the gold/silver ratio down -0.81 to 70.25. That’s bullish.  Lastly, it appears that support at 16 for silver is quite strong; buyers appear every time silver drops below 16.  It is possible that “around 16” might be a medium-term low for silver – although we really need to see a swing low tomorrow to be certain. 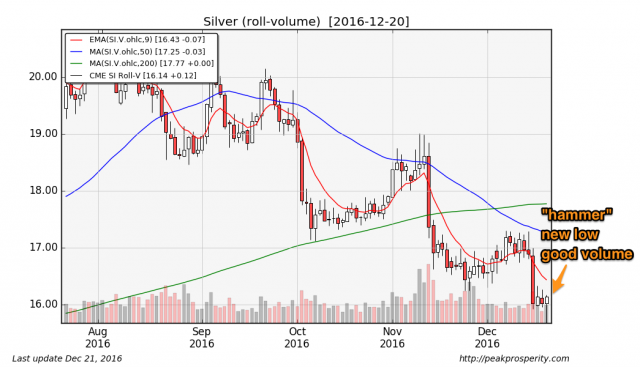 Miners also made new lows, gapping down at the open, but then proceeding to rally for the rest of the day. GDX rose +0.26% on moderate volume while GDXJ climbed +0.28% on heavy volume. Candle print was a “closing white marubozu”, which is usually fairly bullish – and in this case, its exceptionally bullish, with a 71% chance of marking the low.  GDXJ looks quite similar.  Candle code is quite positive on the miners.  Let’s see if we can get a swing low tomorrow. 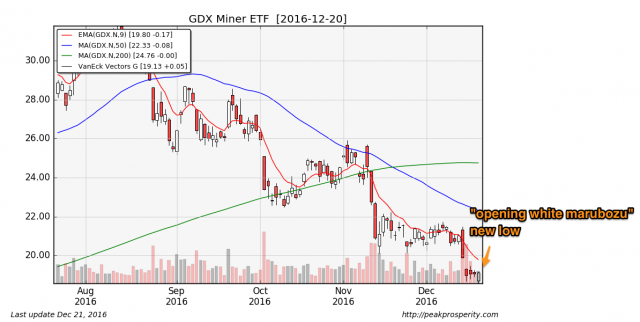 USD rose +0.19 to 103.28, making a new high to 103.62 before retreating. Candle print was a spinning top, which was only mildly bearish (15%). The Euro made a new low of 103.54 before rebounding. The buck just continues to grind higher, and that is bearish for PM. It is up about 5% since Trump’s election back in early November

Crude rallied +0.26 to 52.73, with most of the gains coming after market close; the API report showed a -4.15 million barrel oil inventory draw, which was larger than expected. Inventory draws mixed with OPEC agreements keep a solid bid under crude. EIA report out tomorrow at 10:30 Eastern.

TLT fell -0.50%, dropping back below its 9 EMA. While downside momentum has slowed way down, bonds just cannot seem to reverse direction. TLT remains in a strong downtrend. That might remind you of gold – and sure enough, the correlation between bonds and gold is quite strong right now.

JNK rallied +0.05%, continuing its slow recovery following the hit it took after the FOMC announcement last week. JNK is in a medium-term uptrend – in stark contrast to TLT.

CRB fell -0.34%, dropping more conclusively below its 9 EMA.  CRB remains in a reasonably strong longer-term uptrend, with agriculture and PM the weakest components.

Today, silver may have printed a low, and the miners most probably have done so.  Of course, if the dollar keeps moving higher it will probably invalidate the positive signs we are seeing from silver and the miners.  That’s always my escape hatch these days.  The buck is up 5% following Trump’s election, while gold is down 13% over that same period.