There was a bit of a kerfuffle with the tax cut bill – some of the last minute giveaways injected into the bill made it so the Senate was not able to vote on it due to some parliamentary problem, and so the bill has to go back to the House with all the objectionable additions removed, and then voted on once more. Sausage-making at its finest.

I found some data errors in my database having to do with how historical open interest is calculated; my futures data source is pretty dirty, and the things I had done to compensate for the grunge ended up causing other problems. So after I made the fixes, I retrained a lot of my metals predictors with the new data, and as a result, some of the items are working a bit better than before – better in the sense that the buy & sell signals they produce end up making more (theoretical) money.  Anyhow, that’s why some of the forecaster values have changed.

Gold chopped sideways today in a narrow range today, selling off slightly into the close. Print was a doji, which was a bullish continuation. The updated forecaster issued a sell signal yesterday; today it ticked higher, but is still (slightly) in downtrend territory. Really not much happened today. It looks as though the light holiday trading has already started.  The current pattern looks a bit like what happened back in early October, which would be bearish.  If things go that way, we could correct back to the 1242 low. 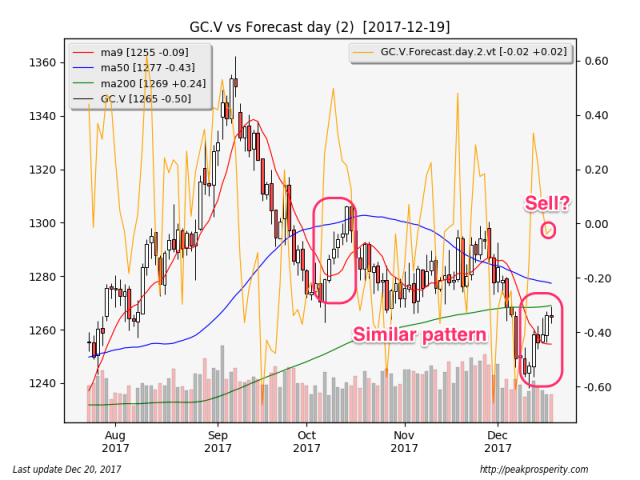 Silver also chopped sideways, going nowhere today. Print was a doji, which was a bullish continuation. The updated forecaster dipped -0.10 to +0.05, which is still (just barely) an uptrend.  Silver, too, is looking a bit like a dead cat bounce. 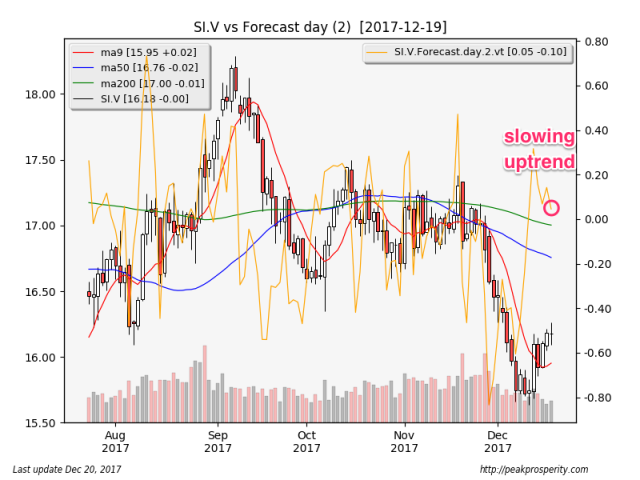 The miners were mixed, with GDX dropping -0.14% on moderately light volume, while GDXJ rose +0.14% on moderate volume. Basically, they too went nowhere. After rebuilding forecasters for both miner ETFs and the miner indexes (GDX, GDXJ, HUI, XAU), I have noticed the best performer of the group is the long-dated XAU index, which goes back to 1983.  It is slightly better than the HUI, so that’s what I’m going to use now. So – XAU forecaster remains in an uptrend, unchanged at +0.32, unlike the GDX and GDXJ forecasters, who are both in downtrends. I’m going to believe XAU, since it has a much better ROI over the long haul. I still like the ETFs for volume, and differentiation of juniors vs seniors, but they aren’t so great for trend forecasting – they are too choppy.

Miners are looking substantially better than either gold or silver.

Today, the GDXJ:GDX ratio rose, while the GDX:$GOLD ratio fell, but both moves were tiny. That’s neutral. 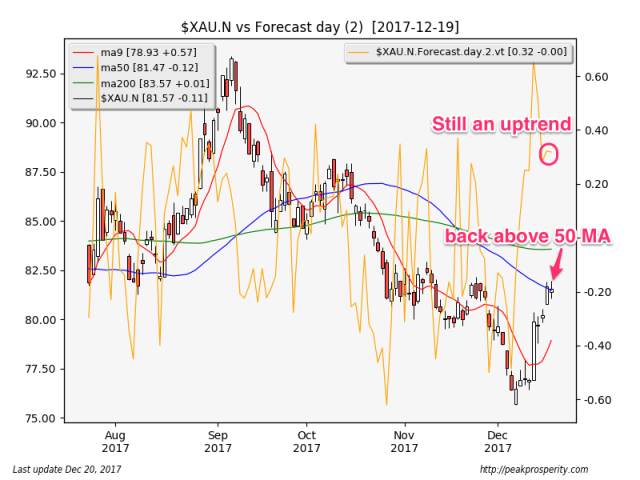 Platinum rallied +0.29%, palladium climbed +0.52%, while copper was unchanged. This might be a top for copper; the doji candle print has a 40% chance of being a bearish reversal. Mostly dojis are useless – but not when they appear after a long move higher. Copper’s forecaster also got really upset, dropping -0.42 to +0.01. I guess it didn’t like that doji either.

The buck fell -0.20 [-0.22%] to 93.03, moving steadily lower over the course of the day. Forecaster dropped -0.04 to -0.53. That says downtrend, but really the buck is chopping around right now, looking for direction. Currently, tax reform isn’t seen as bullish for the buck. I think that will change as all that overseas money starts to come back to the US, but that’s just my guess, and that’s not how things are playing out at the moment. 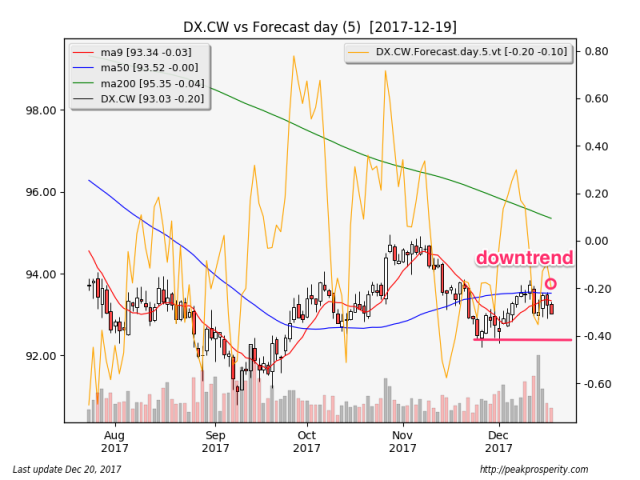 Crude rose +0.32 [+0.56%], moving higher in fits and starts, with a third of the gain happening after the API report at 4:30 looked bullish (crude -5.2m, gasoline +2m, distillates -2.5m). There was also a crack discovered in an important pipeline, which resulted in a multi-week shutdown of the pipeline as parts must be custom-built to fix the problem. Accidents are always bullish for price, since they take a bunch of supply off the market.  The short white candle was a bullish continuation.  Forecaster remains in an uptrend, falling -0.02 to +0.13.

SPX fell -8.69 [-0.32%] to 2681.47, printing a bearish engulfing/swing high, which has a 56% chance of marking the top. We’ve heard that before, but maybe this time it will happen. Interestingly, SPX forecaster remains in a downtrend – it was not impressed with yesterday’s breakout, and it dropped -0.13 to -0.21 today. It sure sees something it doesn’t like. Energy did best (XLE:+0.14%) while utilities were smashed (XLU:-1.82%). Money is fleeing the utility sector right now – but I think its more of an interest rate move, since bonds were trashed today too. Apart from the utility smash, tech (XLK:-0.61%) and financials (XLF:-0.43%) did poorly also.

TLT cratered today, dropping -1.30%. TY dropped also, losing -0.45%, and breaking down below recent support. The TY daily chart looks ugly. It looks as though the weekly and monthly charts ended up winning – they are both in downtrends. This aligns with the plunge in utilities – and we’ve been seeing distribution in XLU now for the past six weeks. That was probably the tell.

JNK plunged -0.63%, making a new low, driving lower along with the rest of the bond group. Yield is being sold.

While PM is chopping sideways, bonds were where the action was today. What’s going on? Well, of course I’m just guessing, but here’s my thoughts.

First, the “tax cuts” are basically a monetary stimulus package. US government borrows money that it isn’t taxing from the people. Unlike Fed money printing, that’s directly inflationary because it hands money to people, and bondholders really don’t like inflation. (Republicans love deficit-funded tax cuts – but only when they are in power.  They also love cutting spending on the programs they don’t like, in order to reduce the massive deficit they just created by cutting taxes).

Second, did I mention the government is borrowing money? That means there will be an increased supply of bonds out there – so the projections for more supply results in lower prices / higher yields. Lastly, there’s the Fed engaging in very boring (watching paint dry) balance sheet normalization. In January, the Fed will start rolling off 30 billion per month, basically adding that much in new supply each and every month.

So the selling does make sense, and the selling in bonds might last for a while. The monthly TY chart has bonds in a very clear downtrend.

With a longer term perspective, I think this selloff in bonds is a shorter-term reaction, which will last right up until those Italian elections start to move closer in time.

Meanwhile, nobody cares about gold right now. While progress has halted for now and given the dropping dollar that tells us that gold isn’t doing very well, the new forecaster for XAU suggests that the miners remain in an uptrend. Silver still has that positive COT report behind it, so I am expecting good things going forward, but it may have to wait until the new year, or maybe just before, until that particular egg hatches.