Gold moved sideways today in a narrow range. The doji candle was a bullish continuation, and forecaster moved higher, rising into an uptrend. Gold is now in an uptrend in both daily and weekly timeframes.

Futures are predicting a 2% chance of a rate increase at the Fed’s next meeting in January 2020. 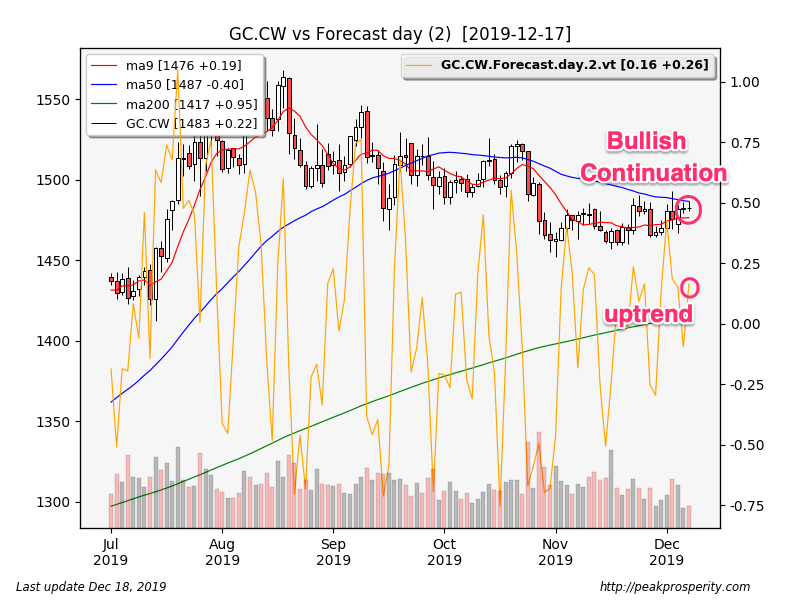 Silver rallied slightly during the the first half of the trading day, then fell into the close. Trading range was narrow. The short black candle was a bullish continuation, and forecaster climbed, moving higher into its uptrend. Silver remains in an uptrend in both daily and weekly timeframes. 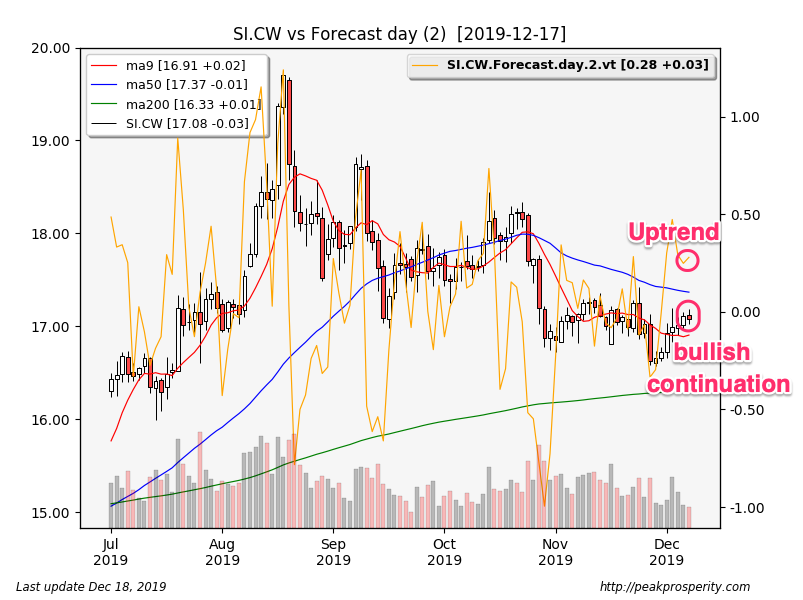 Miners fell early, tried to rally, then failed, ending the day at the lows. GDX fell -0.84% on moderately light volume, and GDXJ dropped -0.54% on moderately light volume. XAU moved down [-0.71%], the four-candle swing high was bearish (although not rated by my code), and forecaster fell, moving into a downtrend. XAU remains in an uptrend in both weekly and monthly timeframes. 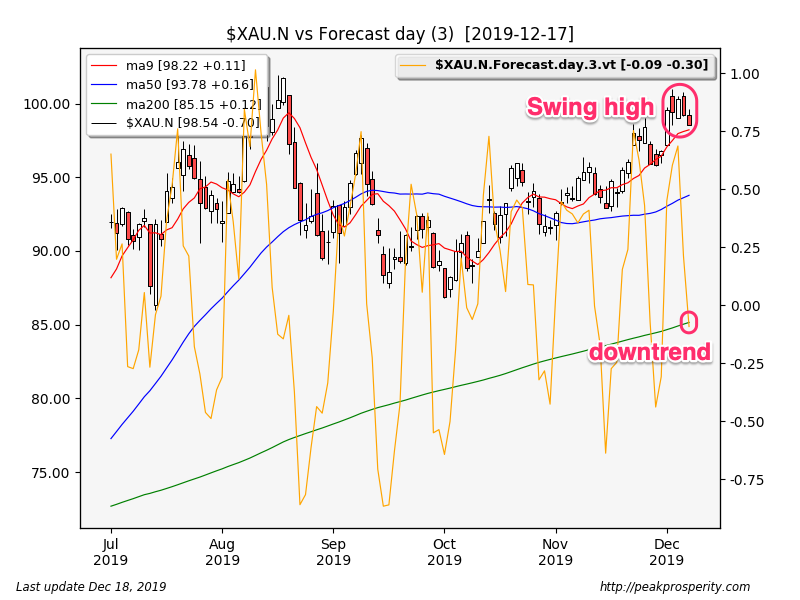 The buck climbed +0.20 [+0.21%] to 96.76 on moderately light volume. The long white candle was a bearish continuation, and while forecaster moved higher, it remains in a downtrend. The buck is in a downtrend in both daily and weekly timeframes.

Tuesday’s API report was bearish: crude +4.7m, gasoline +5.6m, distillates +3.7m. The report knocked about 30 cents off the price of crude after the release.

SPX moved up +1.07 [+0.03%] to 3192.52 on moderate volume. The short black candle was a bullish continuation, and forecaster dropped, but remains in an uptrend. SPX remains in a strong uptrend in all 3 timeframes.

JNK climbed [+0.30%], the white marubozu candle was a bullish continuation, and forecaster inched lower, but remains in a very strong uptrend. BAA.AAA differential was unchanged at +87 bp. No worries about credit according to this indicator.

Junky debt has been on a two-week charge higher. Is this due to the Fed’s repo market spending spree? Higher oil prices? The recent good news out of the US-China trade situation? Maybe all 3 at once. Whatever the underlying cause, money is flooding into the crappy debt sector.

And speaking of that trade deal; while I think one will get signed, I’m going to add a new “grey swan” to the list: China wakes up one morning and decides it no longer wishes to comply with the agreement, and blows the whole thing up.

Industrial Production: headline +1.08% m/m (prior -0.89% m/m) manufacturing: +1.14% m/m (prior -0.70% m/m). This was a positive report, due in part to the resolution of the GM strike, but this month’s gains exceeded consensus expectations. Today’s report is not recessionary.

INDPRO had been declining in fits and starts since the beginning of 2019. It now appears to be reversing back into an uptrend.

Who needs a safe haven when the Fed is printing tens of billions of dollars every single week? Shovel all your money into the lowest grade of crappy debt – no doubt highly liquid – yielding the princely sum of 5.5%.

Well yes, I do kinda wonder why the Fed is doing all that printing. But I’m sure there is nothing really wrong. They’d tell us if there were – in plenty of time to get our money out of the kill zone. Right?

In case you didn’t notice, not much happened today.  I suppose I could have led with that.  🙂