Futures are still predicting no chance of a rate cut at the Fed’s next meeting in January 2020. 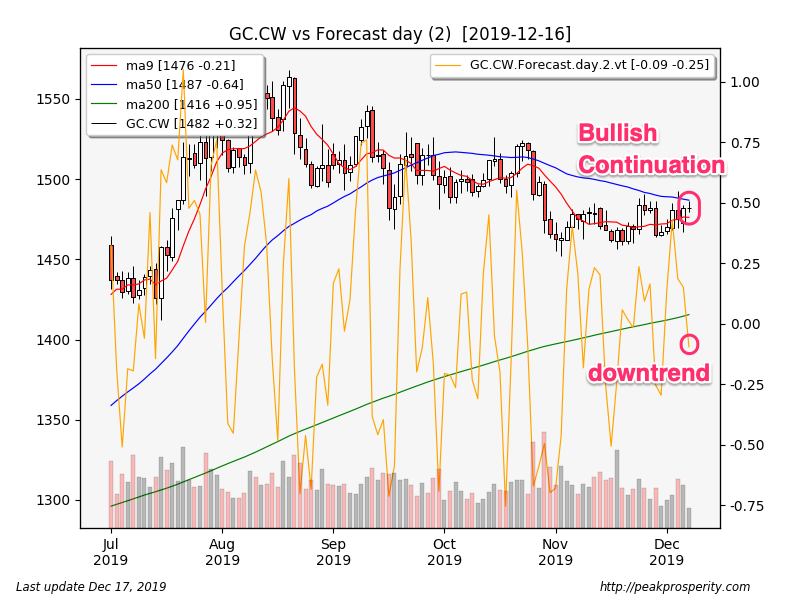 Silver rallied in Asia, then chopped sideways for the remainder of the day.  Silver’s short white candle was a bullish continuation, and forecaster inched lower but remains in an uptrend. Silver remains in an uptrend in both daily and weekly timeframes, with the monthly in a state of no-trend. 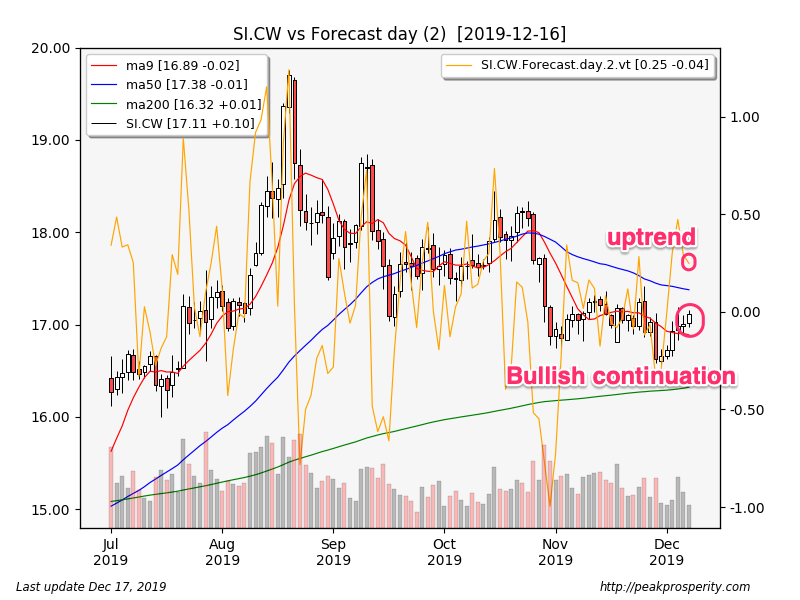 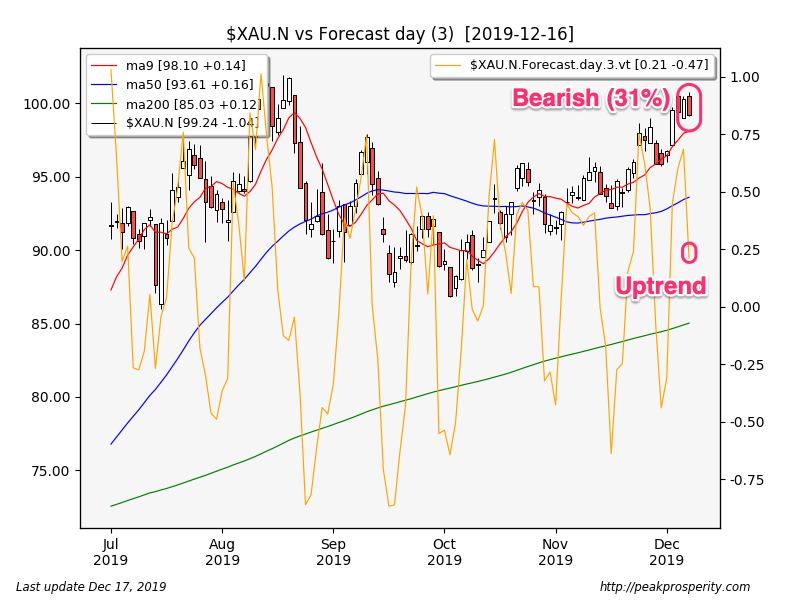 The buck fell -0.18 [-0.19%] to 96.56 on moderately light volume. The short black candle was unrated, and forecaster moved higher but remains in a strong downtrend. The buck remains in a downtrend in all 3 timeframes.

Crude climbed +0.42 [+0.71%] to 59.98 on moderate volume. The short white candle was unrated, and forecaster moved higher into its uptrend. Today saw the highest close for crude since early September; crude is on a roll right now. Crude remains in a strong uptrend in all 3 timeframes.

SPX climbed +22.65 [+0.71%] to 3191.45 on moderately heavy volume. Today marked yet another new all time high for SPX. The opening white marubozu was a bullish continuation, and forecaster moved higher into what is now a strong uptrend. SPX is now in a strong uptrend in all 3 timeframes.

TLT plunged [-1.65%], the long black candle was both bullish and bearish, while forecaster plunged into what is now a strong downtrend. The 30-year yield rose +9 bp to 2.32%.

TY dropped [-0.27%], the opening black marubozu was unrated, and forecaster fell hard, dropping into a strong downtrend. TY is now in a downtrend in all 3 timeframes. The 10-year yield rose +7.3 bp to 1.89%. Bonds continue to look ill.

JNK climbed [+0.23%], the long white candle was a bullish continuation, and forecaster inched higher into its very strong uptrend. This was a new multi-month high for JNK. My guess: the Fed’s “repo madness” is really helping crappy debt. “The Fed has your back – might as well collect the 5.5% coupon.” BAA.AAA differential moved up +1 bp to +87 bp. No worries about credit according to this indicator.

CRB rose +0.76%, with all 5 sectors rising, led by agriculture (+1.91%). CRB broke out to a new 8-month high today. Are we starting to see a commodity-led move of cost-push inflation? Maybe. Or maybe our farmers need to buy bigger tractors. Or something.

So as SPX makes new highs and bonds fall, gold is holding steady, while silver moves higher. My sense is that the plunge in bonds is partially because the Fed is now buying short term Treasury bills, and letting the longer term stuff roll off, and partially because of the positive impulse from the trade deal, which although few details have been provided, the indication are that it will end up – at least on paper – addressing some long-standing issues on doing business in China.

There is no “sell the news” effect from this trade agreement as of yet.

Perhaps the ongoing SPX rally is more about the effects of the massive injection of cash by the Fed. After all, the former holders of those hundreds of billions in treasury bills now have to do something with all that money. They aren’t going to lend it to other banks (why, that would be dangerous), but buying equities – perhaps that’s just fine.

And our recent commodity rally is partially driven by the trade agreement (especially the ag products rally), and partially by the Saudis statement that they’ll over-comply.

Silver outperforming gold appears to align with the commodity rally. If it continues, silver should end up dragging gold higher eventually.