The news of the day was from the ECB, where Draghi told us that the QE program will be ending this month, on schedule. Who will buy all that Italian debt? “Not I”, said the ECB – as of the end of this month. Portugal’s 10-year yield is at 1.66% right now, and Spain is at 1.42%. As a basis of comparison, the US 10-year closed today at 2.91%. I’m guessing rates of peripheral Europe debt will start moving higher.

Gold made a new low today, although the trading range wasn’t very large; the confirmed bearish NR7 was definitely bearish, while forecaster plunged -0.46 to -0.37, which is a sell signal for gold. Gold ended its day right at the 9 MA. It looks as though the move into safe haven gold is starting to fade a bit. Still, gold remains in an uptrend in the weekly and monthly timeframes. 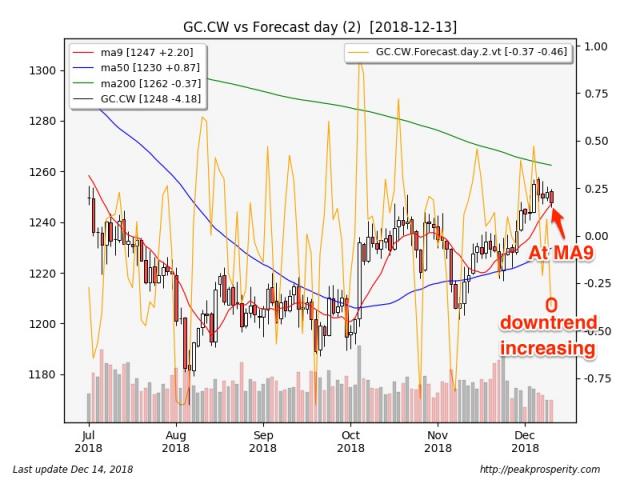 Silver did a bit better than gold; a small X sell-off was bought, bringing price back to even. Silver’s short black/spinning top candle was a bullish continuation, and silver forecaster rose +0.12 to +0.18. Silver is quite close to a substantial breakout. Silver remains in an uptrend in both the daily and weekly timeframes.

The gold/silver ratio fell -0.22 to 84.09. That’s bullish. To my mind, a steadily declining ratio virtually ensures a breakout above 15; nobody buys silver in preference to gold in a PM downtrend. The gold/silver ratio remains near multi-decade highs – that usually happens around a low for PM. 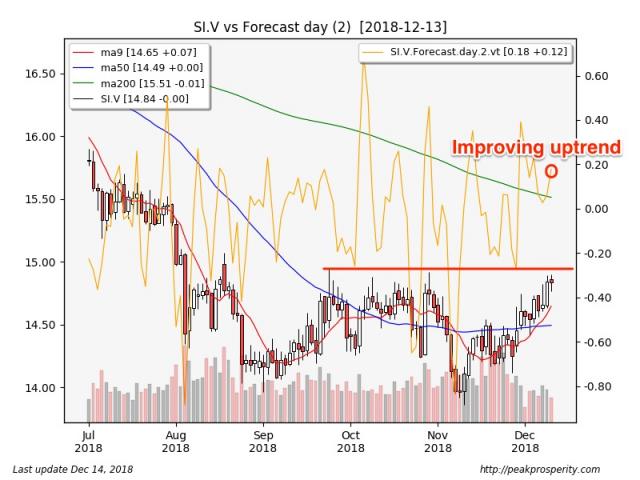 Miners were mostly unchanged, with GDX up +0.20% on moderately heavy volume, while GDXJ fell -0.14% on moderately heavy volume also. XAU rose +0.16%, making a new high by a few pennies. The trading range was narrow; the short white/spinning top was a bullish continuation, but forecaster fell -0.21 to +0.54. XAU remains in an uptrend in all 3 timeframes.  Miners continue to look strong – along with silver. 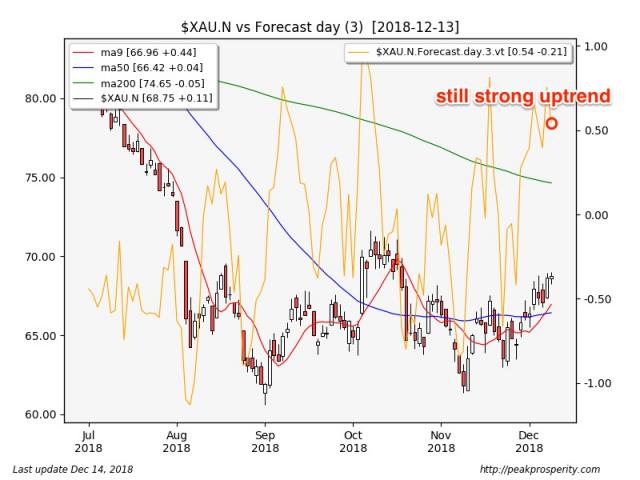 Platinum fell -0.93%, palladium rose +0.03%, and copper moved up just +0.02%. Copper rallied in Asia, but then sold off just before the US opened; a decent-sized shooting star candle.

The buck hardly moved, up +0.04 [+0.04%] to 96.58. The ECB meeting caused some volatility, but since there was no real news, nothing really changed. The buck remains in a downtrend in both the weekly and monthly timeframes.

Crude jumped +1.69 [+3.28%] to 53.18, moving towards the top end of its recent trading range. Why the big rally? I have no idea. An IEA report suggested that oil supply will tighten more quickly in 2019 – maybe that was it. And Canada agreed to shut in production from the tar sands producers, mainly due to pipeline limitations in the region. Anyhow, the long white candle was bullish (42% reversal), and forecaster jumped +0.84 to +0.49, which is a buy signal for crude. This one might be the real deal. Still, crude remains in a downtrend the weekly and monthly timeframes. 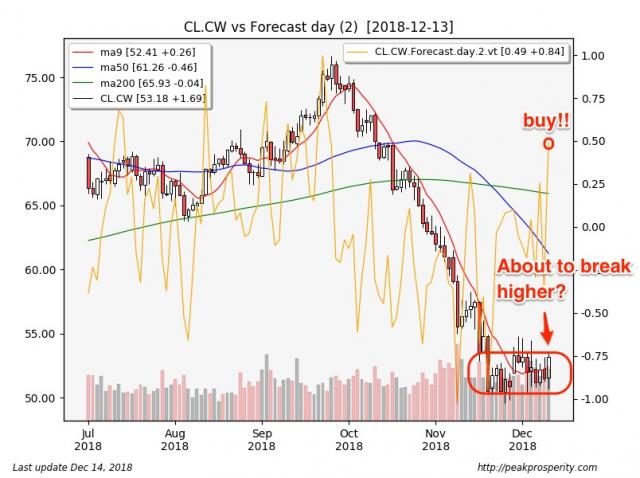 Seen at oilprice.com: a proposal for a “climate passport” which would allow everyone displaced by climate change to migrate wherever they want. Guess where they will all choose to migrate? The place with the highest social benefits, of course. Duh. People aren’t stupid – in fact, people are hard-wired to seek out and exploit windfalls wherever they find them; and to migrant-candidates from third world countries, that’s exactly what a first world “social safety net” looks like: a massive windfall. Proposals like this by the well-meaning “Dr. Johns” of the world (c.f. Nassim Taleb) would end up ripping apart the “destination” nations in short order. Sweden: would you like 5 million migrants armed with “climate passports” – with no ability to speak Swedish – to appear in your relatively small country? What could possibly go wrong? https://oilprice.com/Latest-Energy-News/World-News/Climate-Passport-For-People-Driven-Away-By-Global-Warming-Proposed.html

SPX fell -0.53 [-0.02%] to 2650.54. There was a rally overnight in the futures markets, but the sellers hit at the open, pushing prices lower, with SPX ending the day unchanged.  The spinning top candle was neutral, while forecaster rose +0.16 to +0.22. It appears that the market has gone from selling off hard, to moving sideways, and that’s an improvement. The only question is, will this relative reduction in selling pressure continue?  SPX remains in an uptrend in both the daily and weekly timeframe.

Sector map has utilities leading (XLU:+0.87%) along with REITs (XLRE: +0.69%), while materials (XLB:-1.17%) and financials (XLF:-0.73%) brought up the rear. That’s a bearish sector map; you never like to see utilities on top like that. Here’s one answer to that “selling pressure” question: sector rotation into utilities is not a positive sign.

TLT fell -0.24%, following through off yesterday’s swing high. The confirmed bear NR7 was bearish, and forecaster plunged deeper into downtrend. TY moved up +0.02%, but the bullish harami was actually a bearish continuation. TY forecaster also continued to plunge. TY remains in an uptrend in both the weekly and monthly timeframes. The 10-year yield rose +0.5 bp to 2.91%.

JNK rose +0.26%, making a new high; this is the third good day in a row since the low set back on Monday. The northern doji was a bullish continuation, and forecaster moved more strongly into an uptrend. JNK debt is signaling risk on.

CRB rose +1.01%, with only 2 of 5 sectors rising, led by energy (+2.03%). Apparently the Chinese are buying soybeans again, which is helping agriculture.

Except for the move in crude, today was fairly uneventful. The rotation into yield in equities was mildly disturbing, but none of the other safe haven assets confirmed the move. If crude continues moving higher, that will probably help bring some confidence back into equities. There are a few fairly beaten-down sectors which might attract some money once the worry starts to ebb.

Latest BRExit news: Tony Blair (who has been steadfastly Remain) is predicting that Parliament will vote to declare a new referendum, underscoring the EU’s basic operating principle that if a subject population votes in a way contrary to their wishes, the technique is to first scare the wayward population, and then have a new election, rinse-repeat, until the people finally end up voting the “right” way.

I’m guessing Blair (a quintessential tool-of-the-Deep-State) is finally correct. The scare campaign has been pretty effective, and May’s BRExit deal is definitely the worst of all possible worlds. Perhaps her unconditional surrender had this destination in mind from the very beginning. “Would you rather have Un-BRExit or Unconditional Surrender?”  One wonders what everyone has been talking about behind the scenes.

In support of this theory: apparently May showed up for talks with European leaders empty-handed.  There were no written proposals from her about specific changes she was requesting from them to help her get the deal passed.  https://www.independent.co.uk/news/uk/politics/brexit-theresa-may-eu-angela-merkel-scraps-plan-meeting-juncker-european-council-summit-a8682786.html

An UnBRExit would end up being both Euro and GBP positive in the near term. At least up and until the EU blows up, of course.

We have FOMC next week. Those dot plots should make for interesting reading. The mood sure seems gloomier right now than it was six weeks ago.  Any bets the top end of the dot plots come down half a percentage point?  Maybe more?