Gold fell -4.00 to 1160.10 on moderate volume, and silver dropped -0.18 to 16.96 on moderate volume also. While gold just slowly sold off, silver chopped sideways until a little after market open in New York, whereupon it dropped about 35 cents in about 40 minutes.

The chart tells us that there is no change of trend for gold just yet. Gold remains below its 9 EMA, and while it did not make a new low today, that’s about the only positive thing that happened. Until gold closes above the 9 EMA, its probably best just to watch from the sidelines. Perhaps the FOMC announcement tomorrow will bring out the buyers. 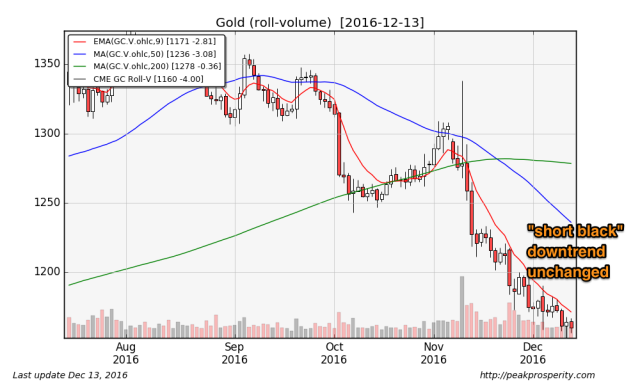 While silver did not make any new lows, and it ended the day above the 9 EMA, the strong move down after market open in New York was a bit surprising – and not a bullish sort of surprise.  While silver is in a very short term uptrend, the longer term trend is clearly down, and given that, the risks remain to the downside. I am worried about a repeat of last month’s big black candle break through the 9 EMA. 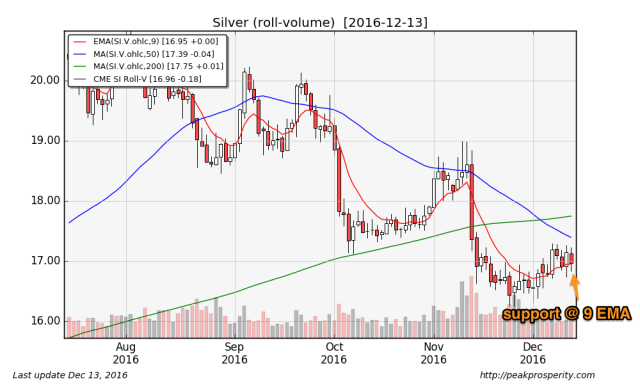 Miners opened down, but then proceeded to move steadily higher, closing near the highs. GDX rose +1.40% on moderate volume, while GDXJ climbed +0.47% on moderately light volume. The rally in the senior miners ended right at the 9 EMA. Miners did well today, especially given the drop in both gold and silver. While they remain inside the recent consolidation zone, as well as below the 9 EMA, they look a whole lot better than gold. 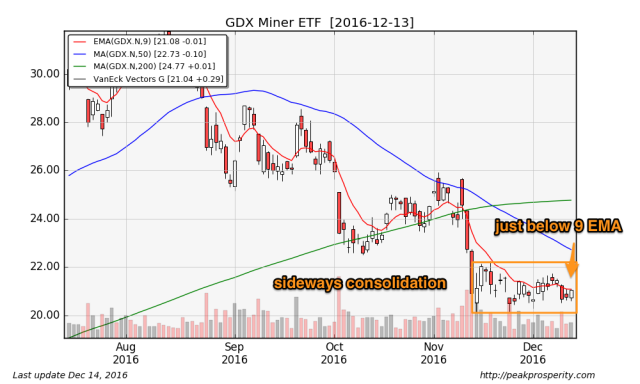 USD rose +0.07 to 100.99. I expect the near term future of the dollar to be decided tomorrow following the FOMC announcement. Looking at the chart, things still look bullish, and in fact I’d expect FOMC to signal at least one rate increase in 2017, if not two. Currently the market is expecting just one, in June, with a possibility of another towards end of year. If the Fed sounds more hawkish than that, we could well see new highs in the buck.

Crude tried rallying again today, and in fact was doing fairly well up until the API report after market close, which showed a (surprisingly) bearish inventory build of 4.7 million barrels. Crude ended up gaining just +0.06 to 52.50, after first hitting a high of 53.45. Candle print today was a doji, which tells us nothing about where crude goes next.

TLT rose +0.36%, printing a swing low on the day, which the candle code rates as a very low probability; worst swing low ever, at 18%. Bonds remain very weak.

JNK rose +0.30%, continuing its move back towards the recent high set back at the end of October. Unlike TLT, JNK remains in a clear short-term uptrend.

CRB rose +0.06%, with only 2 of 5 groups up on the day. CRB remains in its strong short and medium term uptrend.

FOMC will probably set the near-term direction for gold, by either encouraging the dollar to correct or by causing it to break out to new highs.

Gold’s chart has been a story of continual weakness since the election of Donald Trump.  At some point the rotation out of PM and into risk assets will wane, and then at that time gold will (probably) mark its low.

My guess: we need SPX to top out, and then maybe gold will get some love.