While the specifics are scarce, it appears that Trump has agreed to that “phase one” trade deal with China. The deal would call off the new tariffs due to hit on Sunday, and will roll back some existing tariffs by 50%. IP protections? Forced tech transfers? That part remains unclear.

President Trump has agreed to a limited trade agreement with Beijing that will roll back existing tariff rates on Chinese goods and cancel new levies set to take effect Sunday as part of a deal to boost Chinese purchases of U.S. farm goods and obtain other concessions, according to people familiar with the matter.

Also, the UK election exit polls have the Tories winning by a landslide. Now we get to see if Brexit will really happen, and what form it will take. GBP: +2.08%. I don’t interpret this as “GBP loves the Tories”, but rather, “the uncertainty will be over with in the very near future.”

Gold dropped -5.27 [-0.36%] to 1475.40 on moderate volume. Gold rallied more than $10 in the hours prior to the US market open, but then plunged perhaps $20 once the news of the trade agreement hit. The long black candle was actually a bullish continuation, and while forecaster fell, it remains in an uptrend. Gold remains in an uptrend in the daily and weekly timeframes. Gold/euros was not so fortunate; it is now in a downtrend in all 3 timeframes.

COMEX GC open interest rose +2.5K contracts. Current open interest for GC: 87% of global annual production, up +0.31% today. It does not appear as though the selling in gold was the result of official intervention.

Futures are predicting no chance of a rate cut at the Fed’s next meeting in January 2020. 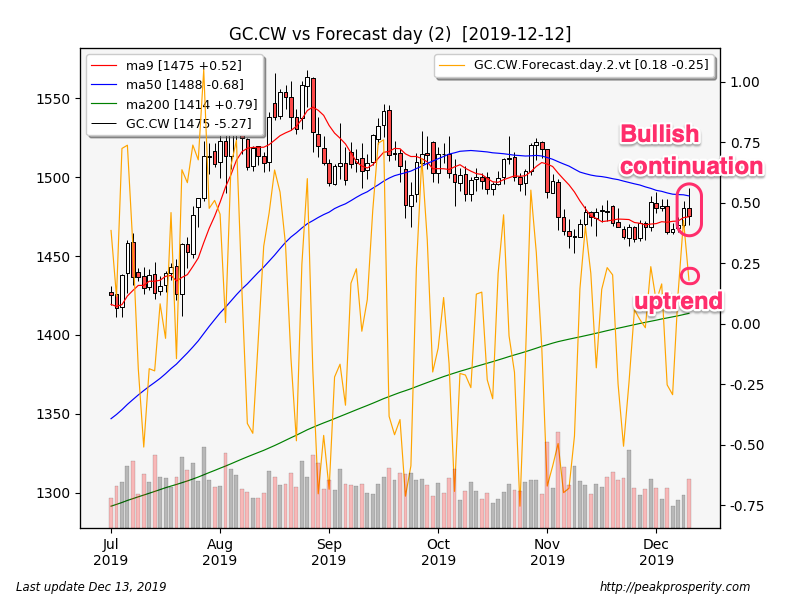 Silver rallied along with gold, then fell as the news of the trade agreement hit at 9:30 am, but then silver managed to bounce back, ending the day in positive territory. Silver’s high wave candle was bearish (46%), but forecaster moved higher and is now in a reasonably strong uptrend. Silver is in an uptrend in both daily and weekly timeframes, with the monthly moving to a state of no-trend. Forecasters are positive, while today’s candle looks more than a little iffy. 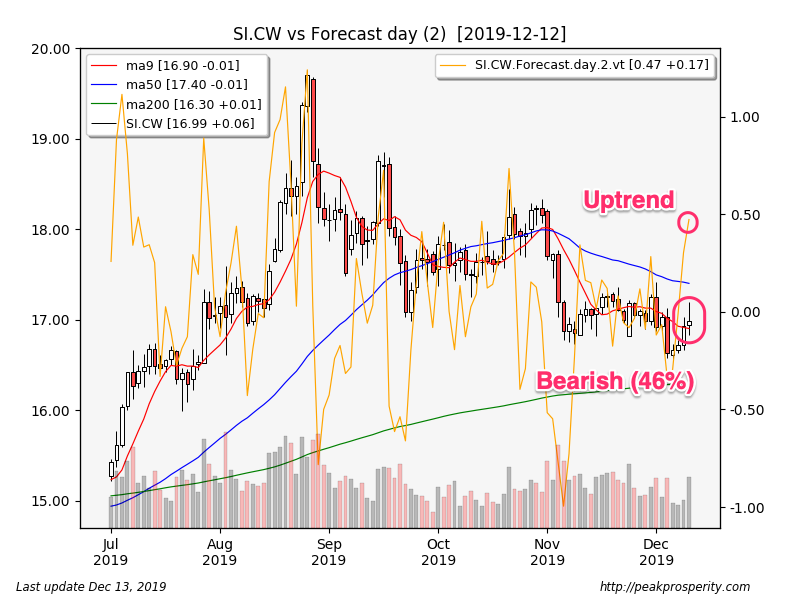 Miners gapped up at the open, then sold off along with gold, wiping out the day’s early gains. GDX fell -0.18% on moderately heavy volume, and GDXJ moved down -0.30% on moderately light volume. XAU dropped [-0.13%], the long black candle was slightly bearish (32%), but forecaster moved higher into what is now a strong uptrend. XAU remains in strong uptrend in all 3 timeframes. 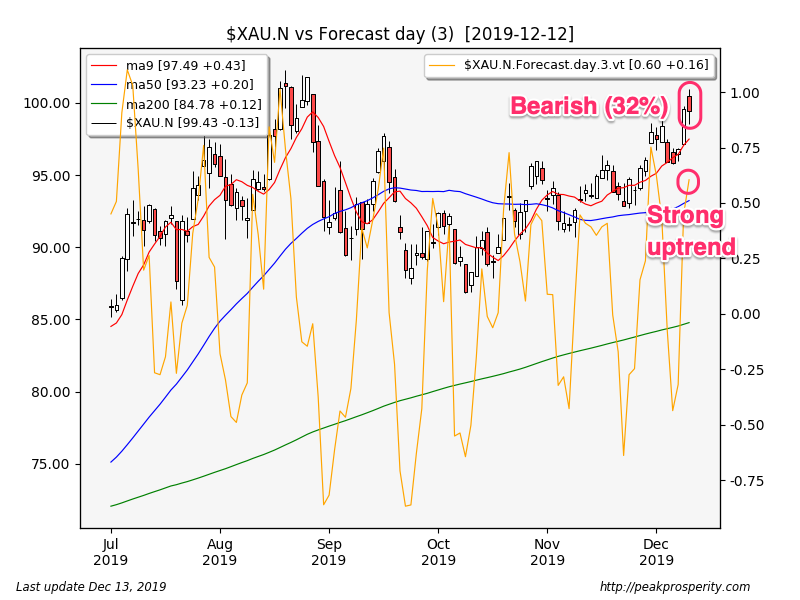 The buck jumped +0.76 [+0.79%] to 97.38 on extremely heavy volume. The swing low candle was quite bullish (68%), and DX forecaster jumped back into an uptrend. Even with today’s rally, the buck remains in a downtrend in both the weekly and monthly timeframes.

Crude moved up +0.38 [+0.65%] to 58.98 on moderate volume. The spinning top candle was a bullish continuation, but forecaster moved lower, dropping into a downtrend. Crude remains in an uptrend in both the weekly and monthly timeframes. Crude’s rally today was all about the trade agreement.

SPX rallied +26.94 [+0.86%] to 3168.57 on moderately heavy volume. As with crude, all of the SPX rally came following the trade agreement news. The long white candle was a bullish continuation, and forecaster moved higher into its uptrend. SPX remains in an uptrend in all 3 timeframes.

TLT plunged [-1.65%], the long black candle was both bullish and bearish, while forecaster plunged into what is now a strong downtrend. The 30-year yield rose +9 bp to 2.32%.

TY dropped [-0.62%], the long black/bearish engulfing candle was also both bullish and bearish, and forecaster dropped deeper into its downtrend. TY is nearing support – on the edge of a larger breakdown; TY is in a downtrend in all 3 timeframes. The 10-year yield rose +10.7 bp to 1.90%.

Bonds had a really bad day. 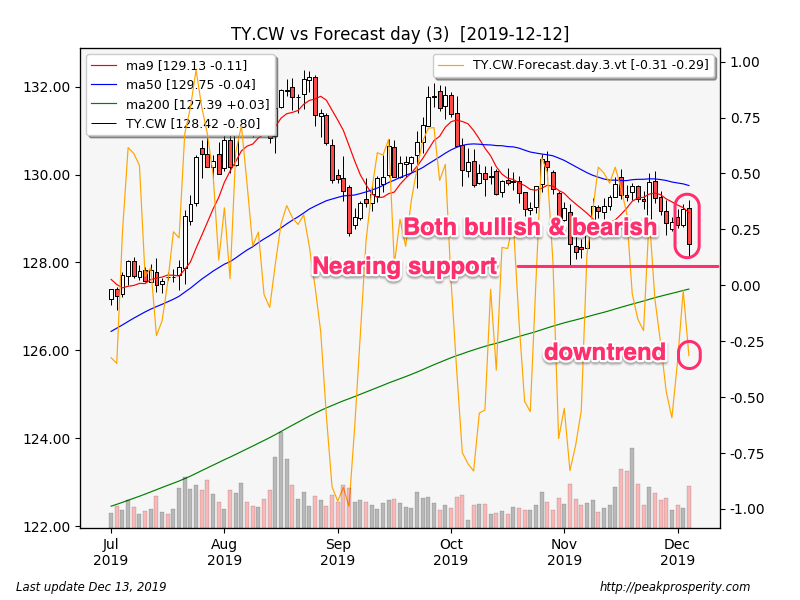 BAA.AAA differential remains at +86 bp. No worries about credit according to this indicator; we will have to wait until tomorrow to see the effects on the differential from the trade deal due to the one-day delay from this series.

Producer Prices: headline +0.25% m/m (prior +0.15% m/m), -1.01% y/y. This month’s increase in producer prices may be signaling an end to the previous 5 quarters of decline; the forecaster for PPIACO is quite close to a bullish reversal. Falling producer prices is recessionary – a rebound in producer prices would instead be inflationary.

So it appears as though a trade deal is finally upon us. It appears as though Trump “split the difference” between removing all tariffs and removing none of them, and that was good enough for the CCP. What else – if anything – did the US get in this deal? We will have to wait for the details to come out. Hopefully it ends up being more than pork & soybeans.

Is the trade deal a “sell the news” event? So far, that is not showing up in the technicals, but it is clearly a possibility. Perhaps it will be once the details are known.

Meanwhile, gold actually did fairly well today given the sharp rise in the buck; if the miners are the tell, they are suggesting that there really is no selling pressure at the moment.

And then there’s inflation. If we assume the trade deal will actually be done, my concern shifts to an inflationary outlook. Crude is doing quite well, producer prices are moving higher, overall commodity prices have reversed, the CPI is starting to get a little hot, and the Fed has become an inflation cheerleader. If confidence in Europe recovers due to the UK election and the expected execution of Brexit, it could lead to a transition back into expansion.

I mean, it could happen. Certainly nobody is expecting it.

It is something to think about. I’m not sure how it would affect gold, but it would be strongly negative for long term debt.  Take a look at that “TY” chart again.  There is a lot of air if support breaks.

Reading between the lines, Armstrong believes that one or more banks in Europe are going to go tits up (possibly: DB), the insiders at the US banks are aware of this, nobody knows who (in the US, or Europe) is exposed (net short) to this risk (possibly via credit default swaps), and so banks have stopped lending to other banks because of this.

My guess: we should have stopped the gambling after 2008.  We didn’t.  And now we’re going to pay for it.

There now.  No need to pay for Armstrong’s report.  🙂

Consider: reducing your bank deposits below the FDIC insurance limit (assuming you have such a “problem”).  Treasury Direct is a good way to buy a 4-week T-bill, currently yielding 1.57%.  It can take a week for the tx to go through – you buy at the auction.

The Fed did not lower rates BECAUSE they cannot. This Repo Crisis is all about them trying to PREVENT short-term rates from rising. They have stated that the economy is strong. This is not QE to stimulate the economy as it was 2007-2009. This is a liquidity crisis BECAUSE banks no longer trust banks and everyone is running scared to lend money for nobody knows who has exposure in Europe goes belly-up.

This is NOT QE, and it does not have the same economic consequence. The Fed has been buying T-Bills desperately trying to PREVENT short-term rates from rising because banks no longer trust banks – PERIOD!

Reading between the lines, Armstrong believes that one or more banks in Europe are going to go tits up (possibly: DB), the insiders at the US banks are aware of this, nobody knows who (in the US, or Europe) is exposed (net short) to this risk (possibly via credit default swaps), and so banks have stopped lending to other banks because of this.

This has been my view from the beginning.  It’s utterly, completely, totally ludicrous to suggest (as Powell did) that the banking system was suffering form a shortage of excess reserves.  Puh-leeze!  At $1,300 billion they are $1,270 billion more than used to be sufficient before the GFC hit.

Instead when banks won’t lend to each other overnight its because they don’t trust each other enough to do it.

Which means they know something we don’t.  And it means Powell is a lying sack.

And it means this whole thing could go 2008 nuclear at any time, and the system won’t be able to absorb it.  So the Fed is fighting like crazy to prevent that sort of thing from ever getting started.

Which I suppose they should, but they also shouldn’t be in that position in the first place.

Summary:  Mistakes were made. 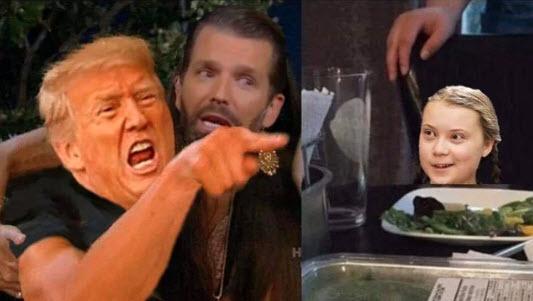 As always we appreciate you explaining Armstrong’s cryptic message.  The raw number of posts on the repo crisis tells me there is much more to this.  This is from one of his recent posts:

“The Repo Crisis is only Part II of this Mother of All Financial Crises.”

So what will Part III of the Mother of All Financial Crisis be?