Intraday, gold chopped mostly sideways in a narrow range; the short white/NR7 candle was neutral, while forecaster jumped +0.30 to +0.09, which is a buy signal for gold. Gold’s move higher didn’t exceed the plunge in the buck, which tells us that gold/Euros declined. In fact gold/euros printed a swing high, but it had a very low rating. Overall, gold is in an uptrend in all 3 timeframes, as is gold/euros. 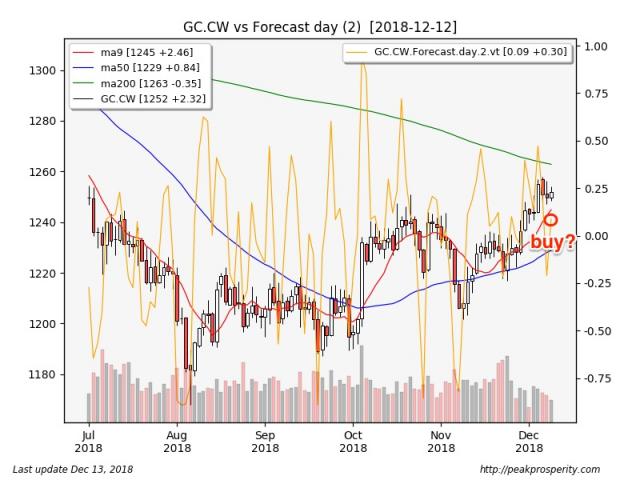 Unlike gold, silver rallied sharply today, making a new high to 14.89, and holding most of the gains into the close. The long white candle was a bullish continuation, and forecaster ticked up +0.03 to +0.06; I’m not sure why forecaster isn’t that impressed, the chart is looking stronger to me. Silver appears to be approaching a breakout – round number 15 is just 16 cents away. Silver is in an uptrend in both the daily and weekly timeframes.

COMEX SI open interest rose +1,106 contracts. So far, there doesn’t seem to be a lot of shorting on this rally. The formerly enthusiastic managed money is no longer piling in short – last week’s COT report showed that managed money is covering as price rises. Also, managed money has a relatively small amount of long positions, and they did not add too many longs last week. If silver breaks out, there could be a scramble in managed money to get on board the train. 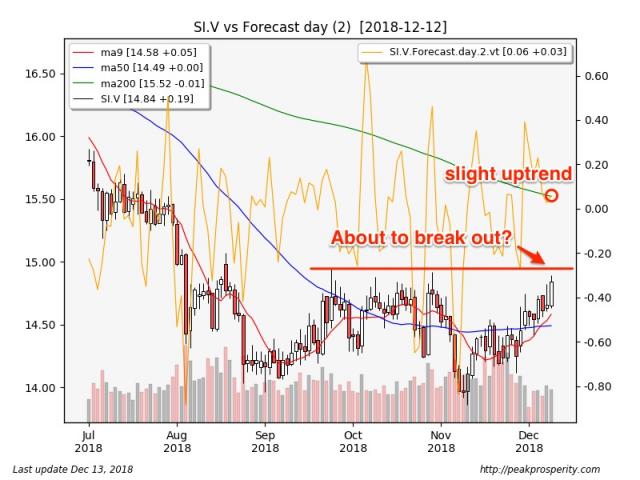 Miners moved higher, with GDX up +2.15% on very heavy volume, while GDXJ climbed +1.50% on very heavy volume also. XAU climbed +2.31%, a decent move, making a new high. The opening white marubozu was a bullish continuation, and forecaster jumped +0.36 to +0.75 – the XAU uptrend remains strong. XAU remains in an uptrend in all 3 timeframes.  That double-bottom pattern is looking more and more likely. 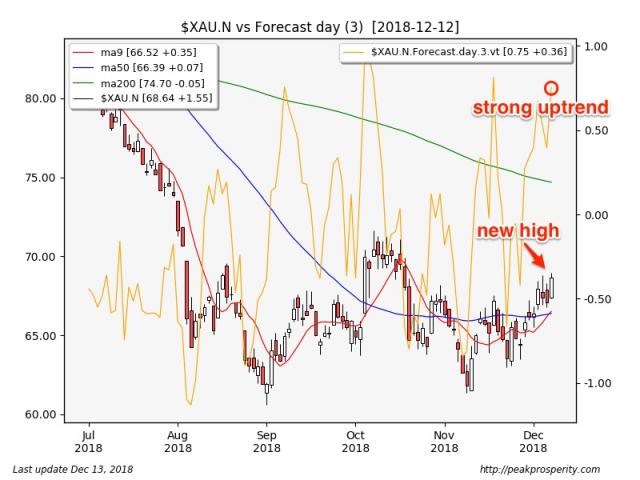 Platinum jumped +2.34%, palladium rose +1.64%, while copper fell -0.11%. What’s that strong move in platinum about? Maybe its about China announcing it would drop its auto import tariffs back down to 15%. Platinum printed a swing low, and its forecaster issued a buy signal. Palladium remains near its all time highs, while copper is still trading in a range.

The buck fell -0.34 [-0.35%] to 96.54. The buck has taken 3 shots at a break above 97 and failed 3 times. With all the fuss in Europe, one would expect a breakout, but that hasn’t happened yet. The bearish engulfing candle wasn’t particularly bearish, while the forecaster jumped +0.15 to +0.39. DX remains above all 3 moving averages, but it is in a downtrend in both the weekly and monthly timeframes.

The Tories appear to be fracturing along globalist-nationalist lines (seen in Remain vs Leave), in much the same way that the Republicans are. “Job creators”, “privatization”, and the usual corporatist-giveaway drivel has given way to a substantial fraction of the party who now voice a belief in “America First” (and/or UK First), which is really about “less globalism” and more about serving their own voters. The choice: the core pocketbook issue of jobs. Should we import cheap labor, engage in wage debasement and job outsourcing, or not? This split is happening in many places in the first world; Germany, Italy, now France, the US, and the UK. What does it mean to be a Republican? A Tory? A CDU voter? This is changing in real time. As an armchair historian, I find it to be a fascinating process, it has happened only in the last two years.

Once the economy turns down, I suspect the process will only accelerate. HRC is ahead of the curve here in her own party. Give it two years. The current leadership can’t possibly agree to Trump’s wall (since anything Trump wants must be opposed), but if they retake the White House in 2020, I predict they will execute a rapid about-face and fund construction of a “neighborly fence” (good fences make good neighbors, after all) that will serve a very similar purpose.

Again, a fascinating process to watch.

Crude fell -0.71 [-1.36%] to 51.49. The EIA report was disappointing (crude: -1.2m, gasoline: +2.1m, distillates: -1.5m) at least compared to yesterday’s very strong API report, but crude’s loss came largely in the few minutes prior to the pit close at 2:30pm – I’m not sure what that was about, but the plunge was quite strong in a very short time, and the selling pressure eased off after the close. The spinning top candle was mildly bearish, and forecaster dropped -0.61 to -0.36, which is a sell signal for crude. With the flurry of buy & sell signals over the past week or so, its clear that forecaster has no idea where things are headed. Crude is now back in a downtrend in all 3 timeframes.  I’m guessing we re-test 50.

SPX rose +14.29 [+0.54%]. All of the gains came in the futures markets overnight. SPX tried rallying during the day, but then the rally failed, sellers took over, and the intraday gains were wiped out and then some. The shooting star candle was mildly bearish (30% reversal), but forecaster rose +0.30 to +0.02, which is a tentative buy signal for SPX. This puts SPX in an uptrend in both the daily and weekly timeframe. Selling pressure appears strong, although it is substantially less than what we saw last week. While there has been little follow-through on Monday’s rally, neither are prices being smashed down to new lows.  If this is a weekly low, it will end up being “a process” rather than a V-bottom.

TLT fell -0.45%, printing a mild swing high, and causing forecaster to issue a sell signal. TY fell -0.17%, and forecaster dropped -0.52 to -0.24, which is a sell signal for TY. In spite of today’s drop, TY remains above all 3 moving averages, and in an uptrend in both the weekly and monthly timeframes. Still, the selling in bonds lines up with the selling of REITs and utility stocks. It is a hint of risk on. The 10-year yield rose +2.7 bp to 2.91%.

JNK rose +0.29%, which is another reasonably good day, but all of the gains came on the gap-up open. Like equities, JNK tried to rally but failed; the gravestone doji was mildly bearish (32% reversal), but forecaster ended up issuing a buy signal anyway. There are signals of risk on from junky debt too.

Today’s rally in silver was curious to me. It wasn’t connected with copper, or seemingly anything else, but after today’s move, silver is not far from a meaningful breakout above round number 15. The COT report looks bullish – those managed money traders have a relatively small amount of long exposure, and they will probably scramble to get on board the train if a breakout does happen. The drop from the 85 highs in the gold/silver ratio is also a positive sign. I’m also not seeing signs of shorting as we near the top end of the range. This all bodes fairly well for silver, which has been nothing but a disappointment since that rally back in 2016 – down about 32% from the highs.  I think silver has been beaten so consistently over the past two years that nobody believes it can possibly rally – including me – and so that’s probably one of those good emotional-contrarian signs that we’re likely to see a breakout.

While selling pressure remains in equities, it isn’t the disaster that we saw last week. Bonds have also reversed course, which suggests that the money flows into safe havens are drying up to some degree, at least for now. Junky debt is also moving off its lows.

We have FOMC next week, and the signals from the US-China talks seem positive. Oil remains the disagreeably negative influence – we might have another re-test of 50 coming up soon. Today’s neutral-looking EIA report didn’t help matters any.

And of course there’s BRExit, and France, although Italy’s upcoming spanking may not happen due to Italy dropping its budget demand to only 2.1% of GDP.  And Turkey’s 10-year bond jumped +100 bp yesterday, which isn’t a great sign for them.  Lastly, there’s an ECB meeting, with an announcement at 7:45 AM EST.  Ya think Draghi will signal interest rate rises anytime soon?  I’m guessing: no.

So we’ll have to see how it goes.